Open Letter To His Honor 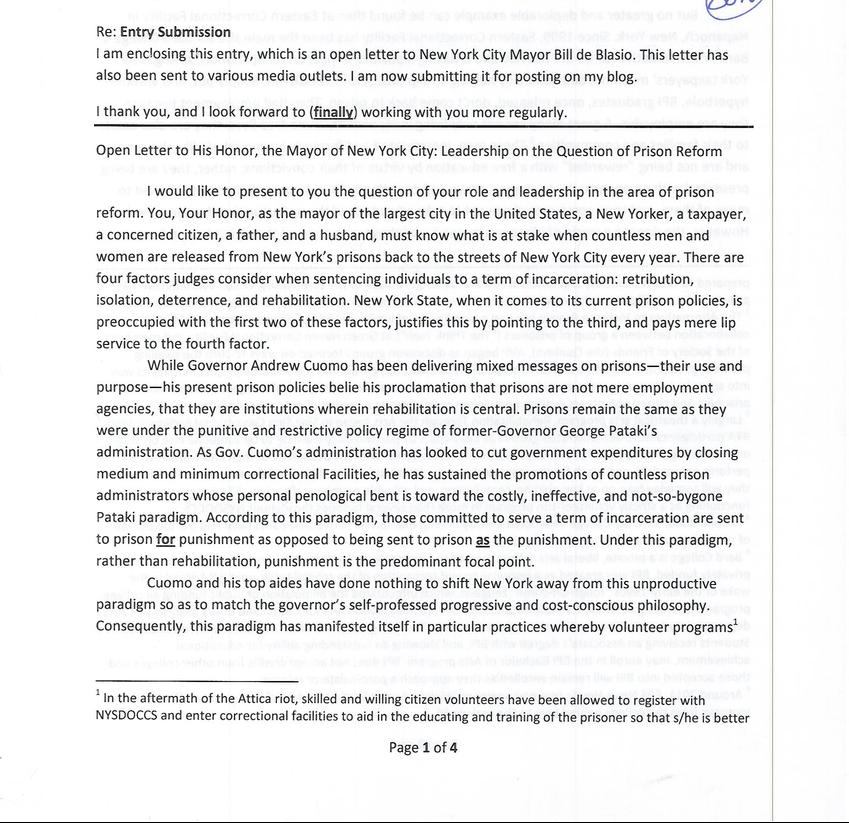 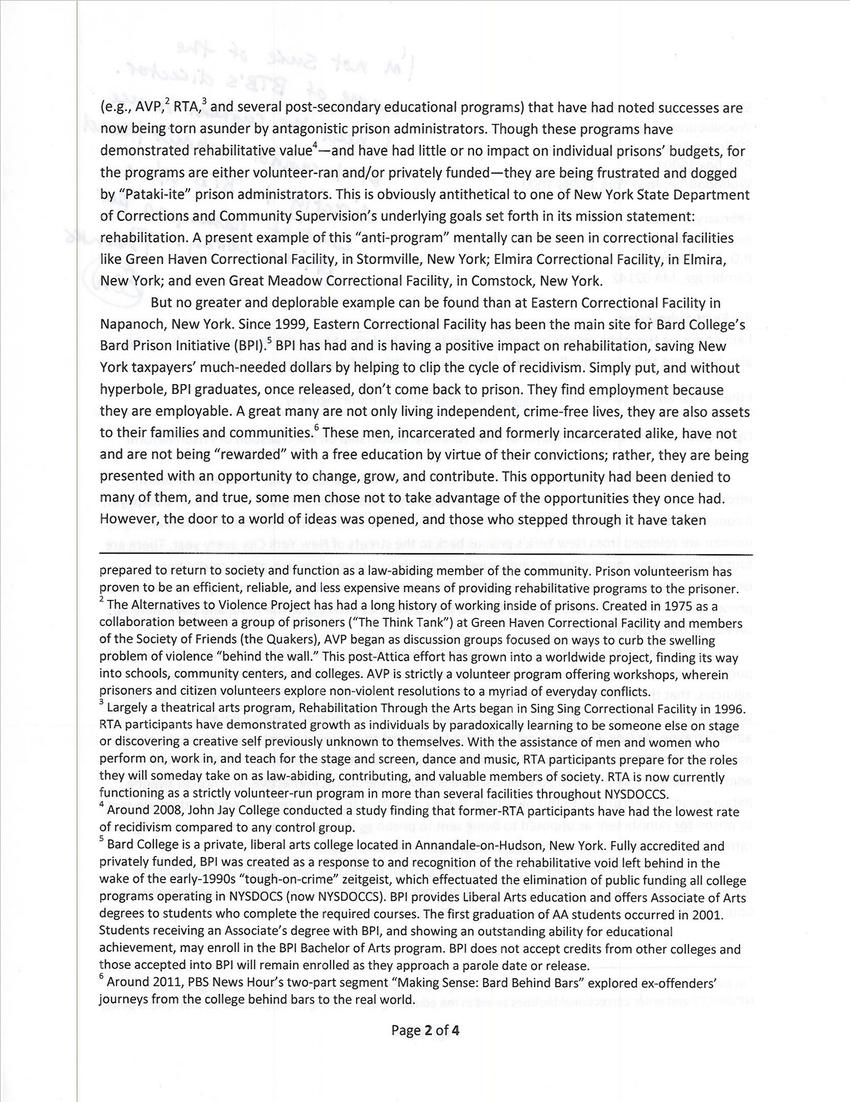 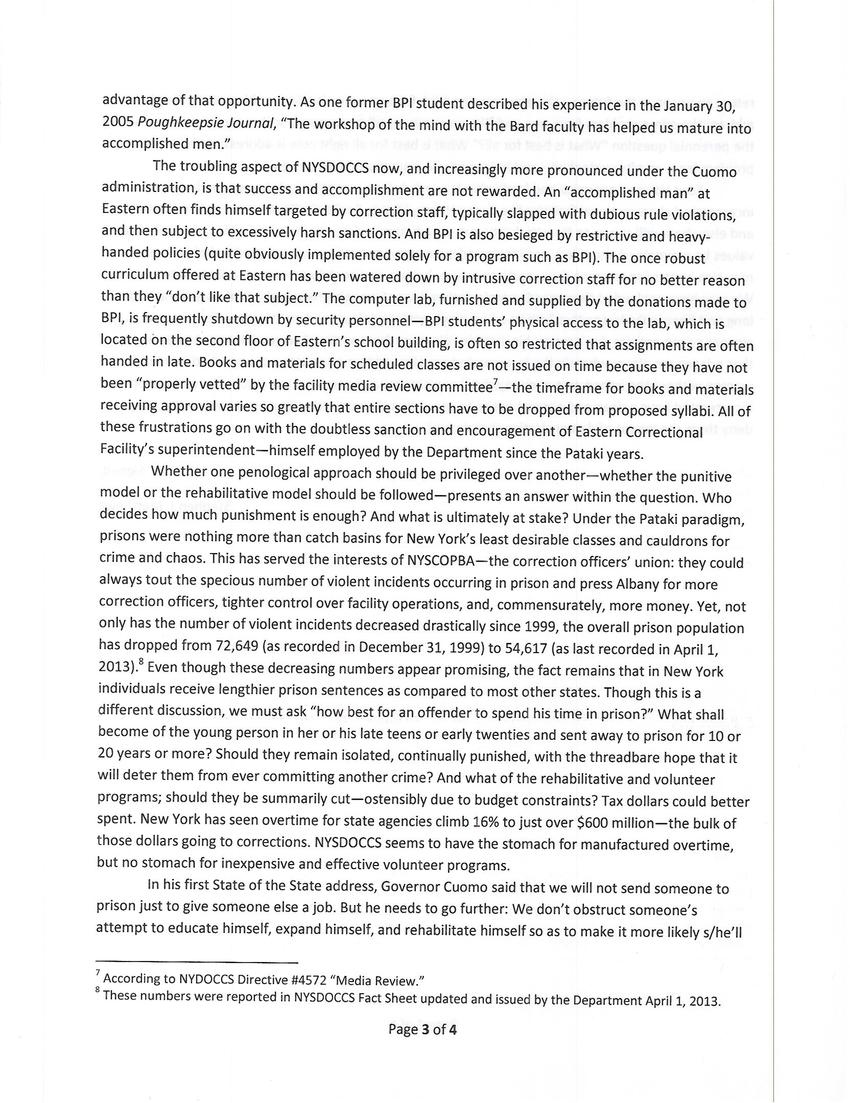 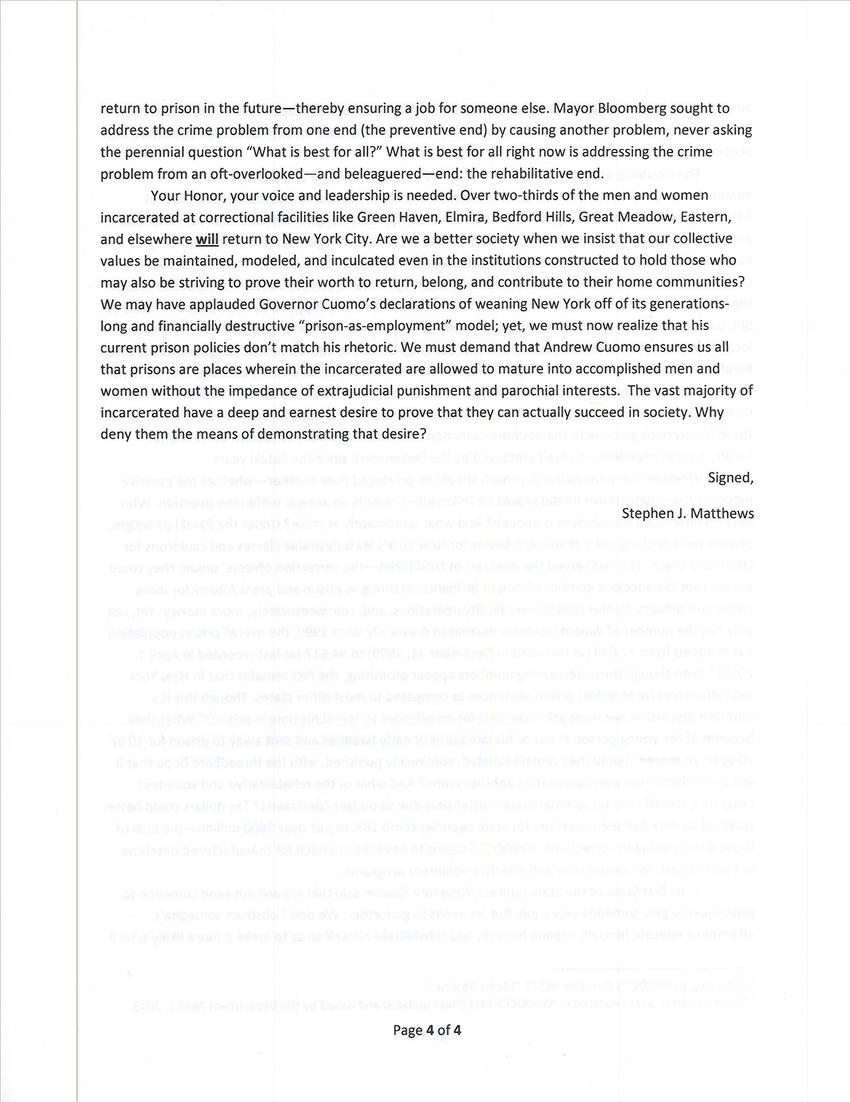 I am enclosing this entry, which is an open letter to New York City Mayor Bill de Blasio. This letter has also been sent to various media outlets. I am now submitting it for posting on my blog.

I thank you, and I look forward to (finally) working with you more regularly.

Open Letter to his Honour, the Mayor of New York City: Leadership on the Question of Prison Reform

I would like to present to you the question of your role and leadership in the area of prison reform. You, Your Honour, as the mayor of the largest city in the United States, a New Yorker, a taxpayer, a concerned citizen, a father, and a husband, must know what is at stake when countless men and women are released from New York's prisons back to the streets of New York City every year. There are four factors judges consider when sentencing individuals to a term of incarceration: retribution, isolation, deterrence and rehabilitation. New York State, when it comes to its current prison policies, is preoccupied with the first two of these factors, justifies this by pointing to the third, and pays mere lip service to the fourth factor.

While Governor Andrew Cuomo had been delivering mixed messages on prisons - their use and purpose - his present prison policies belie his proclamation that prisoners are not mere employment agencies, that they are institutions wherein rehabilitation is central. Prisons remain the same as they were under the punitive and restrictive policy regime of former - Governor George Pataki's administration. As Gov. Cuomo's administration has looked to cut government expenditures by closing medium and minimum correctional facilities, he has sustained the promotions of countless prison administrators whose personal penological bent is toward the costly, ineffective, and not-so-bygone Pataki paradigm. According to this paradigm, those committed to serve a term of incarceration are sent to prison for punishment as opposed to being sent to prison as the punishment. Under this paradigm, rather than rehabilitation, punishment is the predominant focal point.

Cuomo and his top aides have done nothing to shift New York away from this unproductive paradigm so as to match the governor's self-professed progressive and cost-conscious philosophy. Consequently, this paradigm has manifested itself in particular practices whereby volunteer programs (e.g. AVP, RTA, and several post-secondary educational programs) that have had noted successes are now being torn asunder by antagonistic prison administrators. Though these programs have demonstrated rehabilitative value - and have had little or no impact on individual prisons' budgets, for the programs are either volunteer-ran and/or privately funded - they are being frustration and dogged by 'Pataki-ite' prison administrators. This is obviously antithetical to one of New York State Department of Corrections and Community Supervision's underlying goals set forth in its mission statement: rehabilitation. A present example of this 'anti-program' mentally can be seen in correctional facilities like Green Haven Correctional Facility, in Stormville, New York; Elmira Correctional Facility, in Elmira, New York; and even Great Meadow Correctional Facility, in Comstock, New York.

But no greater and deplorable example can be found than at Correctional Facilitiy in Napanoch, New York. Since 1999, Eastern Correctional Facility has been the main site for Bard College's Bard Prison Initiative (BPI). BPI has had and is having a positive impact on rehabilitation, saving New York taxpayers' much-needed dollars by helping to clip the cycle of recidivism. Simply put, and without hyperbole, BPI graduates, once released don't come back to prison. They find employment because they are employable. A great many are not only living independent, crime-free lives, they are also assets to their families and communities. These men, incarcerated and formerly incarcerated alike, have not and are not being 'rewarded' with a free education by virtue of their convictions; rather, they are being presented with an opportunity to change, grow, and contribute. This opportunity has been denied to many of them, and true, some men chose not to take advantage of the opportunities they once had. However, the door to a world of ideas was opened, and those who stepped through it have taken advantage of that opportunity. As one former BPI student described his experience in the January 30, 2005 Poughkeepsie Journal, 'The workshop of the mind with the Bard faculty has helped us mature into accomplished men'.

The troubling aspect of NYSDOCCS now, and increasingly more pronounced under the Cuomo administration, is that success and accomplishment are not rewarded. An 'accomplished man' at Easter often finds himself targeted by correctional staff, typically slapped with dubious rule violations and then subject to excessively harsh sanctions. And BPI is also besieged by restrictive and heavy-handed policies (quite obviously implemented solely for a program such as BPI). The once robust curriculum offered at Eastern has been watered down by intrusive staff for no better reason than they 'don't like that subject.' The computer lab, furnished and supplied by the donations made to BPI, is frequently shut-down by security personnel - BPI students' physical access to the lab, which is located on the second floor of Eastern's school building, is often restricted that assignments are often handed in late. Books and materials for scheduled classes are not issued on time because they have not been 'properly vetted' by the facility media review committee - the timeframe for books and materials receiving approval varies so greatly that entire sections have to be dropped form proposed syllabi. All of these frustrations go on with the doubtless sanction and encouragement of Eastern Correctional Facility's superintendent - himself employed by the department since the Pataki years.

Whether one penological approach should be privileged over another - whether the punitive model or the rehabilitative model should be followed - presents an answer within the question. Who decides how much is enough? And what is ultimately at stake. Under the Pataki paradigm, prisons were nothing more than catch basins for New York's least desirable classes and cauldrons for crime and chaos. This has served the interest of NYSCOPBA - the correction officers' union: they could always tout the specious number of violent operations, and, commensurately, more money. Yet, not only has the number of violent incidents decreased since 1999, the overall prison population has dropped from 72,649 (as recorded in December 31, 1999) to 54,617 (as last recorded in April 1, 2013). Even though these decreasing numbers appear promising, in fact remains that in New York individuals receive lengthier prison sentences as compared to most other states. Thogh this is a different discussion, we must ask 'how best for an offender to spend his time in prison?' What shall become of the young person in her or his late teens or early twenties and sent away to prison for 10 or 20 years or more. Should they remain isolated, continually punished, with the threadbare hope that it will deter them from ever committing another crime? And what of the rehabilitative and volunteer programs, should they be summarily cut - ostensibly due to budget constraints? Tax dollars could be better spent. New York has seen overtime for state agencies climb 16% to just over $600 million - the bulk of those dollars going to corrections. NYSDOCCS seems to have the stomach for manufactured overtime, but no stomach for inexpensive and effective volunteer programs.

In his first State of State address, Governor Cuomo said that we will not send someone to prison just to give someone else a job. But he needs to go further: we don't obstruct someone's attempt to educate himself, expand himself, and rehabilitate himself so as to make it more likely s/he'll return to prison in the future - thereby ensuring a job for someone else. Mayor Bloomberg sought to address the crime problem from one end (the preventative end) by causing another problem, never asking the perennial question 'What is best for all' What is best for all right now is addressing the crime problem from an oft-overlooked - and beleaguered - end: the rehabilitative end.

Your Honor, your voice and leadership is needed. Over two-thirds of the men and women incarcerated at correctional facilities like Green Haven, Elmira, Bedford Hill,s Great Meadow, Eastern and elsewhere will return to New York City. Are we a better society when we insist that our collective values be maintained, modelled, and inculcated even in the institutions constructed to hold those who may also be striving to prove their worth to return, belong, and contribute to their home communities? We may have applauded Governor Cuomo's declarations of weaning New York off its generations-long and financially destructive 'prison-as-employment' model; yet, we must now realised that his current prison policies don't match his rhetoric. We must demand that Andrew Cuomo ensures us all that prisons are places wherein the incarcerated are allowed to mature into accomplished men and women without the impedance of extrajudicial punishment and parochial interests. The vast majority of incarcerated have a deep and earnest desire to prove that they can actually succeed in society. Why deny them the means of demonstrating that desire?