Hope And A Bit Trepidation 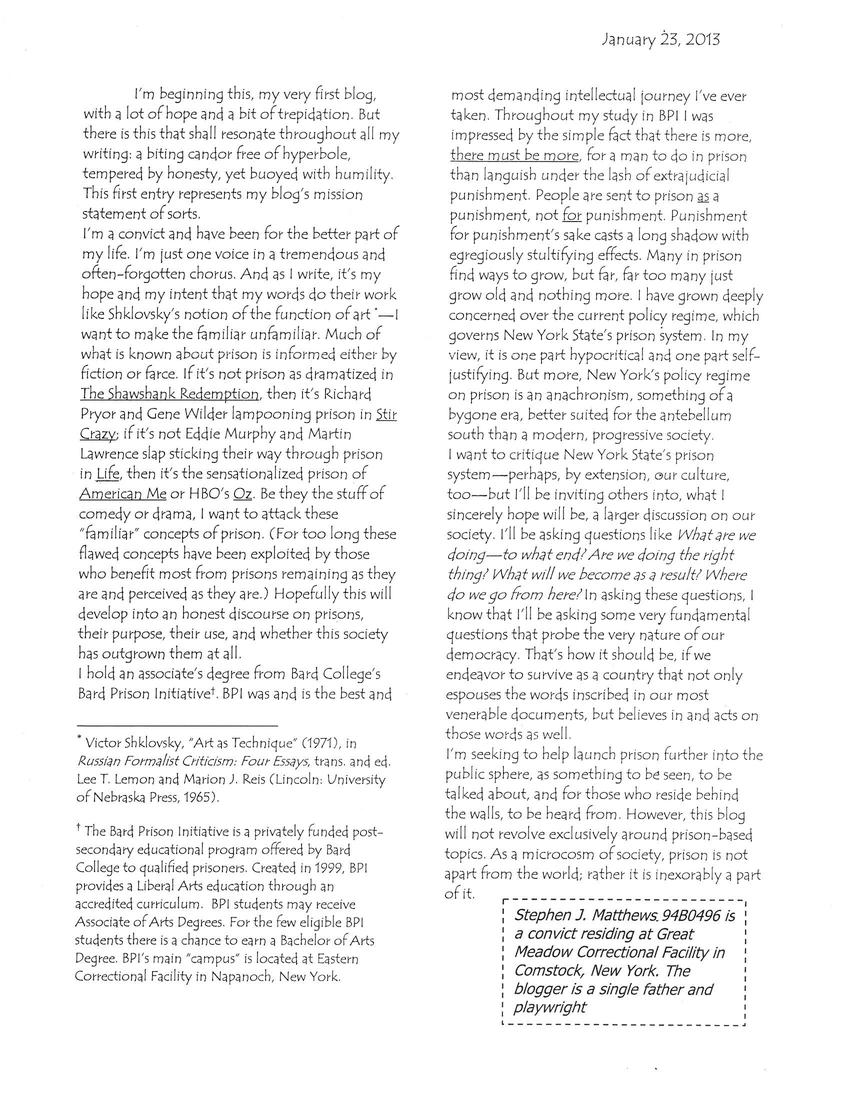 I'm beginning this, my very first blog, with a lot of hope and a bit of trepidation. But there is this that shall resonate throughout all my writing: a biting candor free of hyperbole, tempered by honesty, yet buoyed with humility. This first entry represents my blog's mission statement of sorts.
I'm a convict and have been for the better part of my life. I'm just one voice in a tremendous and often-forgotten chorus. And as I write, it's my hope and my intent that my words do their work like Shklovsky's* notion of the function of art - I want to make the familiar unfamiliar. Much of what is known about prison is informed either by fiction or farce. If it's not prison as dramatized in The Shawshank Redemption[underlined], then it's Richard Pryor and Gene Wilder lampooning prison in Stir Crazy[underlined]; if it's not Eddie Murphy and Martin Lawrence slap sticking their way through prison in Life[underlined], then it's the sensationalized prison of American Me[underlined] or HBO's Oz[underlined]. Be they the stuff of comedy or drama, I want to attack these familiar concepts of prison. (For too long these flawed concepts have been exploited by those who benefit most from prisons remaining as they are and perceived as they are.) Hopefully this will develop into an honest discourse on prisons, their purpose, their use, and whether this society has outgrown them at all.
I hold an associate's degree from Bard College's Bard Prison Initiative**. BPI was and is the best and most demanding intellectual journey I've ever taken. Throughout my study in BPI I was impressed by the simple fact that there is more, there must be more[underlined], for a man to do in prison than languish under the lash of extrajudicial punishment. People are sent to prison as[underlined] a punishment, not for[underlined] punishment. Punishment for punishment's sake casts a long shadow with egregiously stultifying effects. Many in prison find ways to grow but far, far too many just grow old and nothing more. I have grown deepply concerned over the current policy regime which governs New York State's prison system. In my view, it is one part hypocritical and one part self-justifying. But more, New York's policy regime on prison is an anachronism, something of a bygone era, better suited for the antebellum south than a modern, progressive society. I want to critique New York State's prison system - perhaps, by extension, our culture too - but I'll be inviting others into, what I sincerely hope will be, a larger discussion on our society. I'll be asking questions like [italics]What are we doing - to what end? Are we doing the right thing? What will we become as a result? Where do we go from here? [close italics] In asking these questions, I know that I'll be asking some very fundamental questions that probe the very nature of our democracy. That's how it should be, if we endeavor to survive as a country that not only espouses the words inscribed in our most venerable documents, but believes in and acts on those words as well.
I'm seeking to help launch prison further into the public sphere, as something to be seen, to be talked about, and for those who reside behind the walls, to be heard from. However, this blog will not revolve exclusively around prsion-based topics. As a microcosm of society, prison is not apart from the world; rather it is inexorably a part of it.

[In bold] Stephen J Matthews.94B0496 is a convict residing at Great Meadow Correctional Facility in Comstock, New York. The blogger is a single father and a playwright

**The Bard Prison Initiative is a privately funded post-secondary educational program offered by Bard College to qualified prisoners. Created in 1999, BPI provides a Liberal Arts education through an accredited curriculum. BPI students may receive Associate of Arts Degrees. For the few eligible BPI students there is a chance to earn a Bachelor of Arts Degree. BPI's main "campus" is located at Eastern Correctional Facility in Napanoch, New York

Thanks for writing! I finished the transcription for your post. I look forward to reading more from your blog - good luck with it!