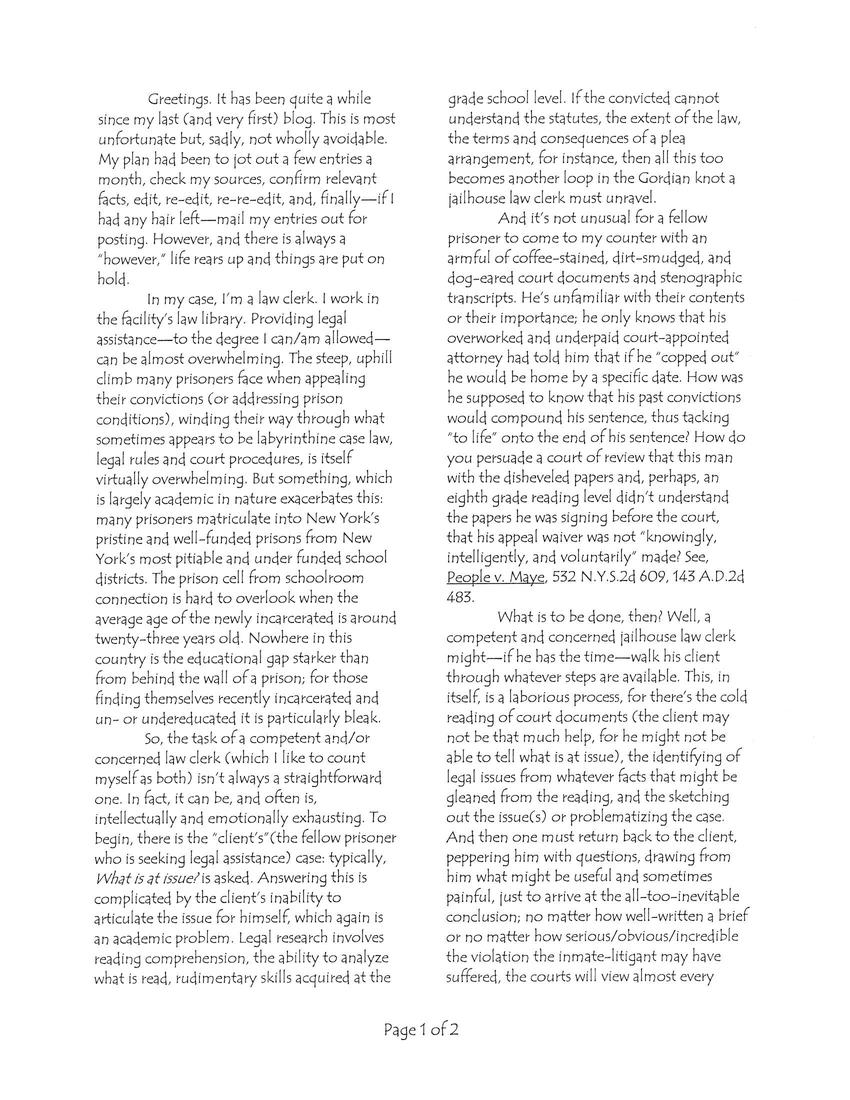 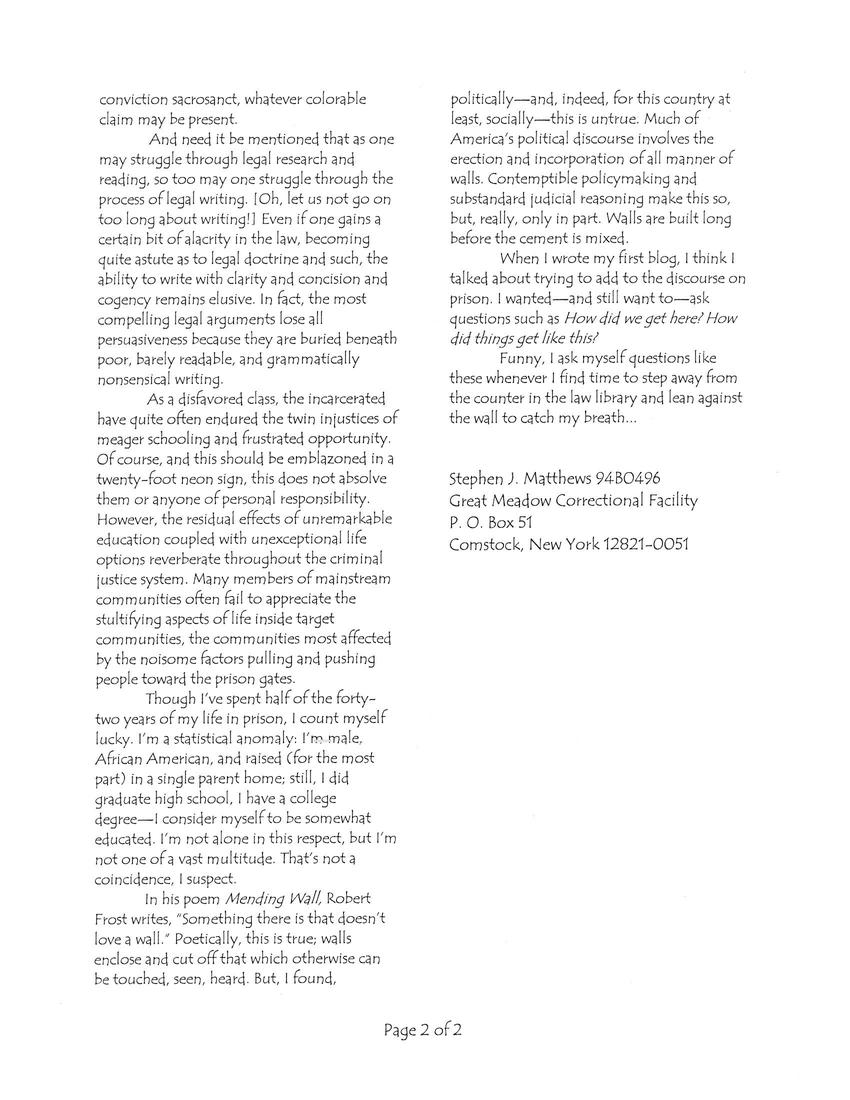 Greetings. It has been quite a while since my last (and very first) blog. This is most unfortunate, but sadly, not wholly avoidable. My plan had been to jot out a few entries a month, check my sources, confirm relevant facts, edit, re-edit, re-re-edit, and, finally - if I had any hair left - mail my entries out for posting. However, and there is always a "however," life rears up and things are put on hold.

In my case, I'm a law clerk. I work in the facility's law library. Providing legal assistant - to the degree I can/am allowed - can be almost overwhelming. The steep, uphill climb many prisoners face when appealing their convictions (for addressing prison conditions), winding their way through what sometimes appears to be labyrinthine case law, legal rules and court procedures, is itself virtually overwhelming. But something, which is largely academic in nature exacerbates this: many prisoners matriculate into New York's pristine and well-funded prisons from New York's most pitiable and under funded school districts. The prison cell from schoolroom connection is hard to overlook when the average age of the newly incarcerated is around twenty-three years old. Nowhere in this country is the educational gap starker than from behind the wall of a prison; for those finding themselves recently incarcerated and un- or undereducated it is particularly bleak.

So, the task of a competent and/or concerned law clerk (which I like to count myself as both) isn't always a straightforward one. In fact, it can be, and often is, intellectually and emotionally exhausting. To begin, there is the "client's" (the fellow prisoner who is seeking legal assistance) case: typically, 'What is at issue?' is asked. Answering this is complicated by the client's inability to articulate the issue for himself, which again is an academic problem. Legal research involves reading comprehension, the ability to analyze what is read, rudimentary skills acquired at the grade school level. If the convicted cannot understand the statutes, the extent of the law, the terms and consequences of a plea arrangement, for instance, then all this too becomes another loop in the Gordian knot a jailhouse clerk must unravel.

And it's not unusual for a fellow prisoner to come to my counter with an armful of coffee-stained, dirt-smudged, and dog-eared court documents and stenographic transcripts. He's unfamiliar with their contents or their importance; he only know that his overworked and underpaid court-appointed attorney had told him that if he "copped out" he would be home by a specific date. How was he supposed to know that his past convictions would compound his sentence, thus tacking "to life" onto the end of his sentence? How do you persuade a court of review that this man with the disheveled papers and, perhaps, an eighth grade reading level didn't understand the papers he was signing before the court, that his appear waiver was not "knowingly, intelligently and voluntarily" made? See People V. Maye. N.Y.S.2d 609, 143 A.D.2d 483

What is to be done, then? well, a competent and concerned jailhouse law clerk might - if he has the time - walk his client through whatever steps are available. This, in itself, is a laborious process, for there's the cold reading of court documents (for the client may not be that much help, for he might not be able to tell what is at issue), the identifying of legal issues from whatever facts that might be gleaned from the reading, and the sketching out the issue(s) or problematizing the case. And the one must return back to the client, peppering him with questions, drawing from him what might be useful and sometimes painful, just to arrive at the all-too-inevitable conclusion; no matter how well-written a brief or no matter how serious/obvious/incredible the violation the inmate-litigant may have suffered, the courts will view almost every conviction sacrosanct, whatever colorable claim may be present.

And need it be mentioned that as one may struggle through legal research and reading, so too may one struggle through the process of legal writing. [Oh, let us not go on too long about writing!] Even if one gains a certain bit of alacrity in the law, becoming quite astute as to legal doctrine and such, the ability to write with clarity and concision and cogency remains elusive. In fact, the most compelling legal arguments lose all persuasiveness because they are buried beneath poor, barely readable, and grammatically nonsensical writing.

As a disfavored class, the incarcerated have quite often endured the twin injustices of meager schooling and frustrated opportunity. Of course, and this should be emblazoned in a twenty-foot neon sign, this does not absolve them or anyone of personal responsibility. However, the residual effects of unremarkable education coupled with unexceptional life options reverberate throughout the criminal justice system. Many members of mainstream communities often fail to appreciate the stultifying aspects of life inside target communities, the communities most affected by the noisome factors pulling and pushing people toward the prison gates.

Though I've spent half of the forty-two years of my life in prison, I count myself lucky. I'm a statistical anomaly: I'm male, African American, and raised (for the most part) in a single parent home; still, I did graduate high school. I have a college degree - I consider myself to be somewhat educated. I'm not alone in this respect, but I am not one of a vast multitude. That's not a coincidence, I suspect.

In his poem Mending Wall, Robert Frost writes, "Something there is that doesn't love a wall." Poetically, this is true, walls enclose and cut off that which otherwise can be touched, seen, heard. But, I found, politically - and, indeed, for this country at least, socially - this is untrue. Much of America's political discourse involves the erection and incorporation of all manner of walls. Contemptible policymaking and this substandard judicial reasoning mark this so, but really, only in part. Walls are built long before the cement is mixed.

When I wrote my first blog, I think I talked about trying to add to the discourse on prison. I wanted - and still want to - ask questions such as 'How did we get here? How did things get like this?'

Funny, I ask myself questions like these whenever I find time to step away from the counter in the law library and lean against the wall to catch my breath....