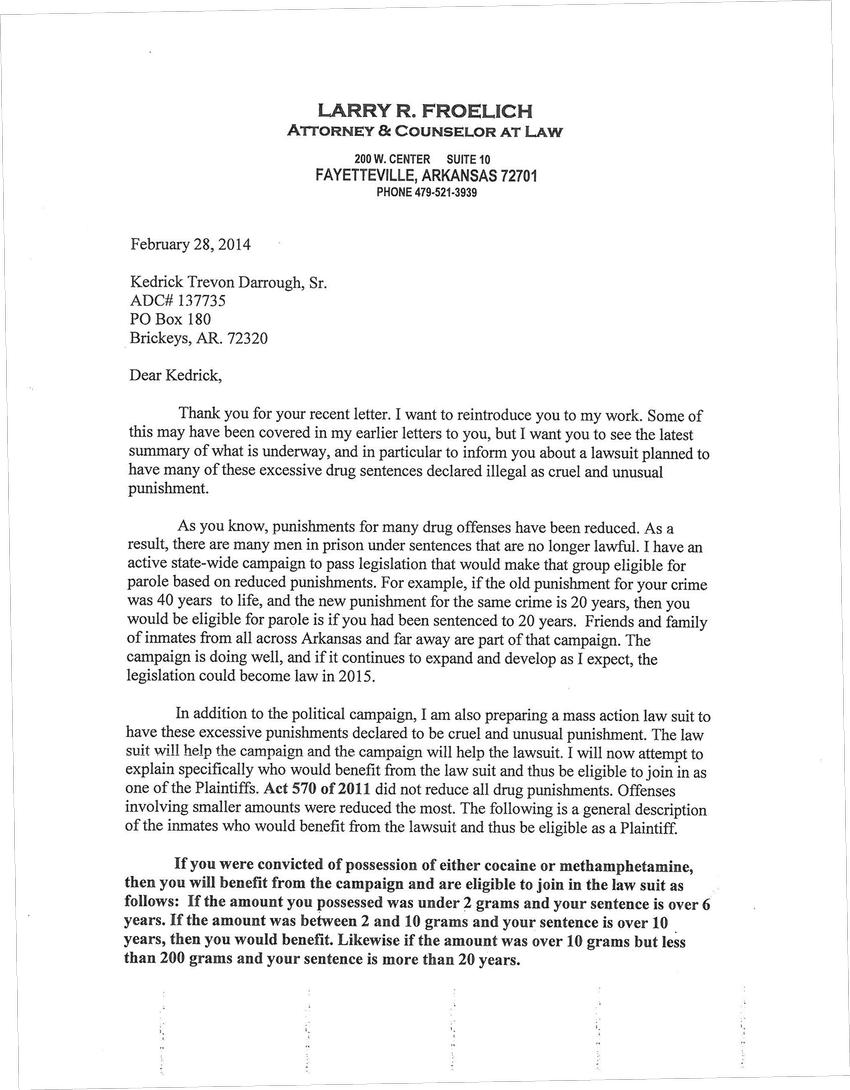 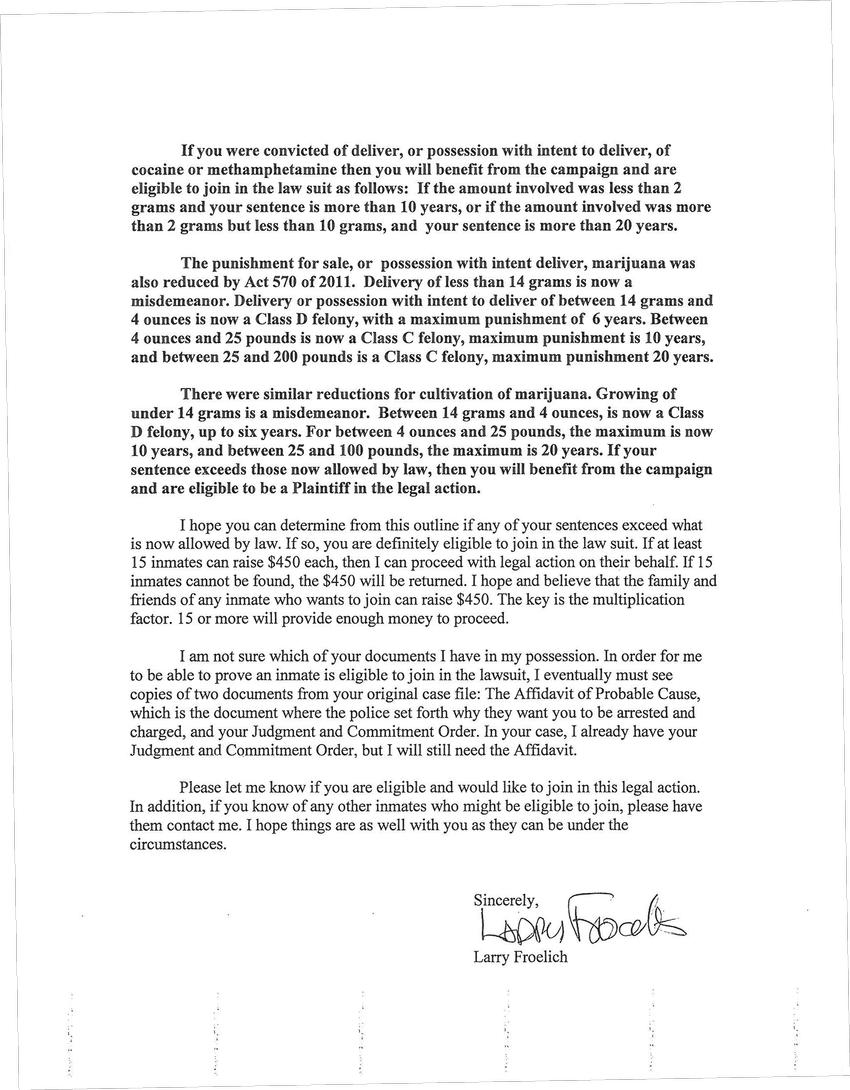 Thank you for your recent letter. I want to reintroduce you to my work. Some of this may have been covered in my earlier letters to you, but I want you to see the latest summary of what is underway and, in particular, to inform you about a lawsuit planned to have many of these excessive drug sentences declared illegal as cruel and unusual punishment.

As you know, punishments for many drug offenses have been reduced. As a result, there are many men in prison under sentences that are no longer lawful. I have an active state-wide campaign in pass legislation that would make that group eligible for parole based on reduced punishments. For example, if the old punishment for your crime was 40 years to life, and the new punishment for the same crime is 20 years, then you would be eligible for parole if you had been sentenced to 20 years. Friends and family of inmates from all across Arkansas and far away are part of that campaign. The campaign is doing well and, if it continues to expand as I expect, the legislation could become law in 2015.

I will now attempt to explain specifically who would benefit from the lawsuit and thus be eligible as a plaintiff.

There were similar reductions for cultivation of marijuana. Growing under 14 grams is a misdemeanor. Between 14 grams and 4 ounces is now a Class D felony, up to six years. For between 4 ounces and 25 pounds, the maximum is now 10 years, and between 25 to 100 pounds, the maximum is 20 years. If your sentence exceeds those now allowed by law, then you will benefit from the campaign and are eligible to be a plaintiff in the legal action.

I hope you can determine from this outline if any of your sentences exceed what is now allowed by law. If so, you are definitely eligible to join in the lawsuit. If at least 15 inmates can raise $450 each, then I can proceed with legal action on their behalf. If 15 inmates cannot be found, the $450 will be returned. I hope and believe that the family and friends of any inmate who wants to join can raise $450. The key is the multiplication factor. 15 or more will provide enough money to proceed.

I am not sure which of your documents I have in my possession. In order for me to be able to prove an inmate is eligible to join in the lawsuit, I eventually must see copies of two documents from your original case file: the Affidavit of Probable Cause, which is the document where the police sets forth why they want you to be arrested and charged, and your Judgment and Commitment Order. In your case, I already have your Judgment and Commitment Order, but I will still need the Affidavit.

Please let me know if you are eligible and would like to join in this legal action. In addition, if you know of any other inmates who might be eligible to join, please have them contact me. I hope things are as well with you as they can be under the circumstances. 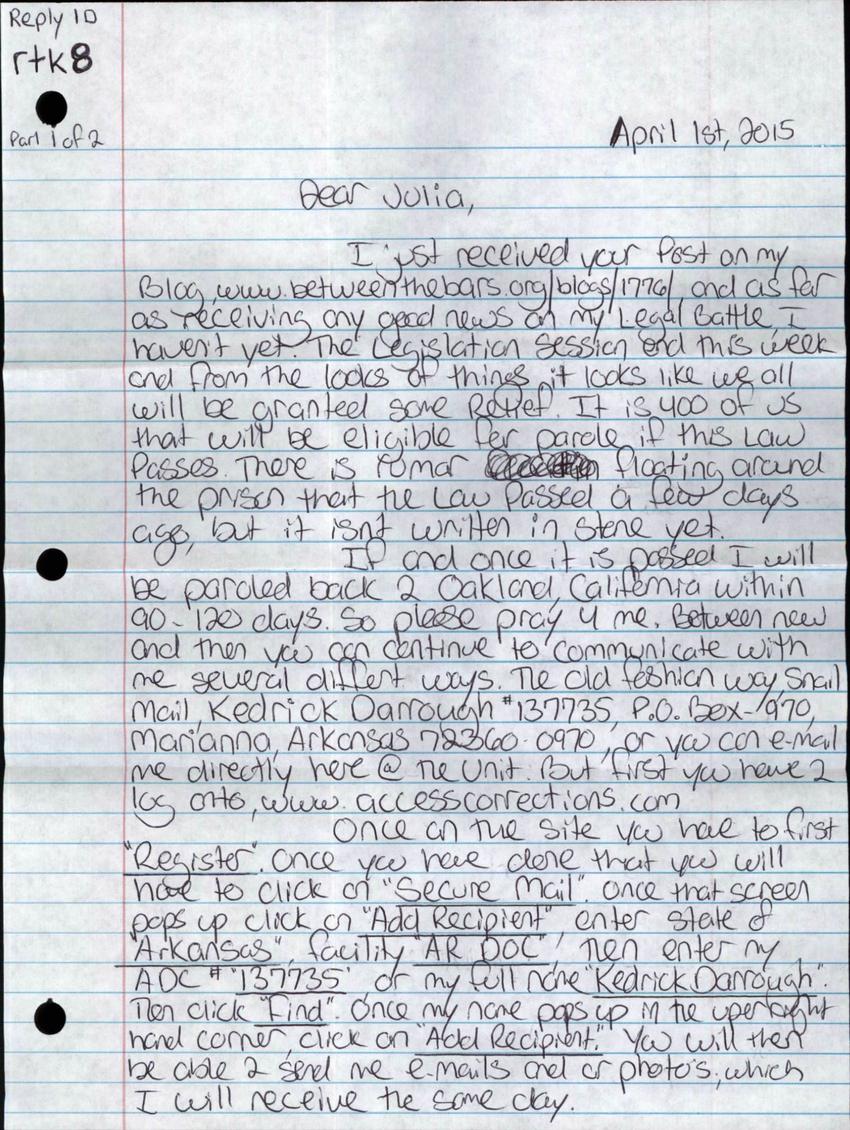 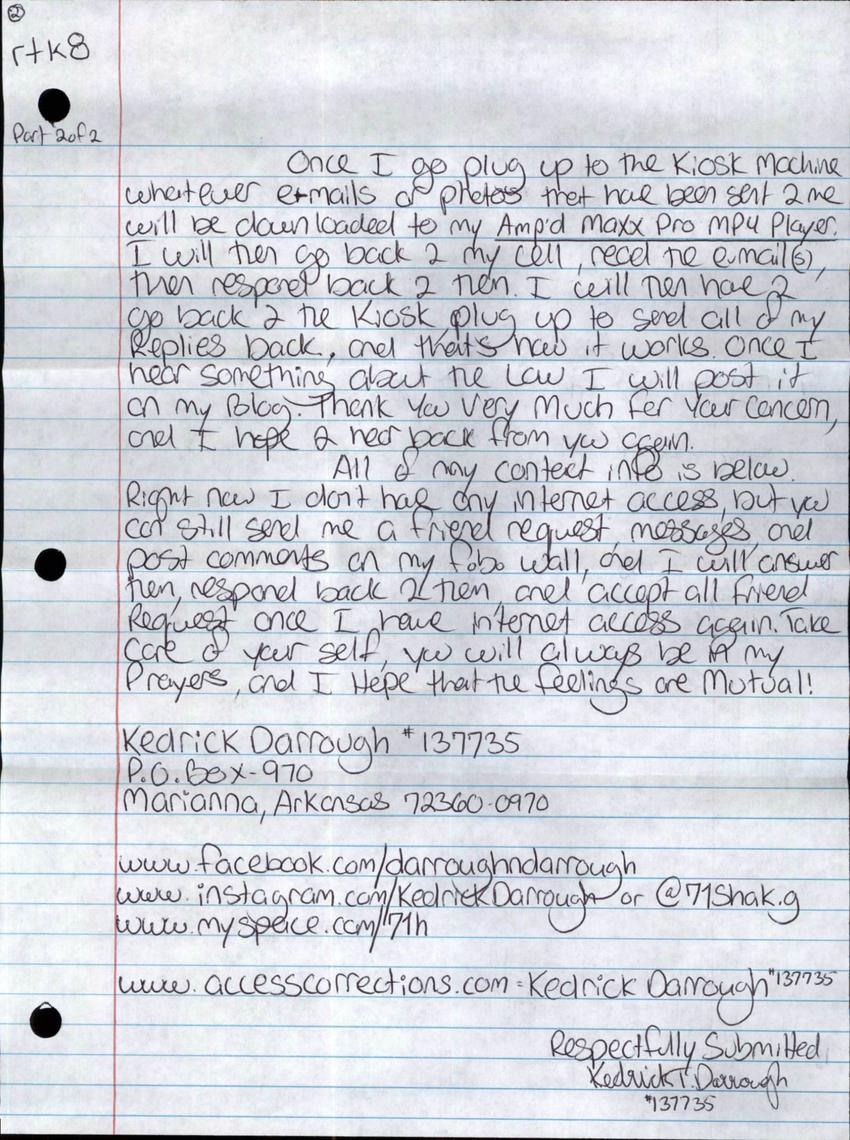 Dear Kedrick,
sorry for replying so late. When I got your message, I did check on the legislation session and it didn't look good. But I hope my research wasn't correct.
Thank you for your invitation for direct correspondence. Unfortunately I do not have the capacity as i am already corresponding.
Take care and keep us updated, I would appreciate,
Julia