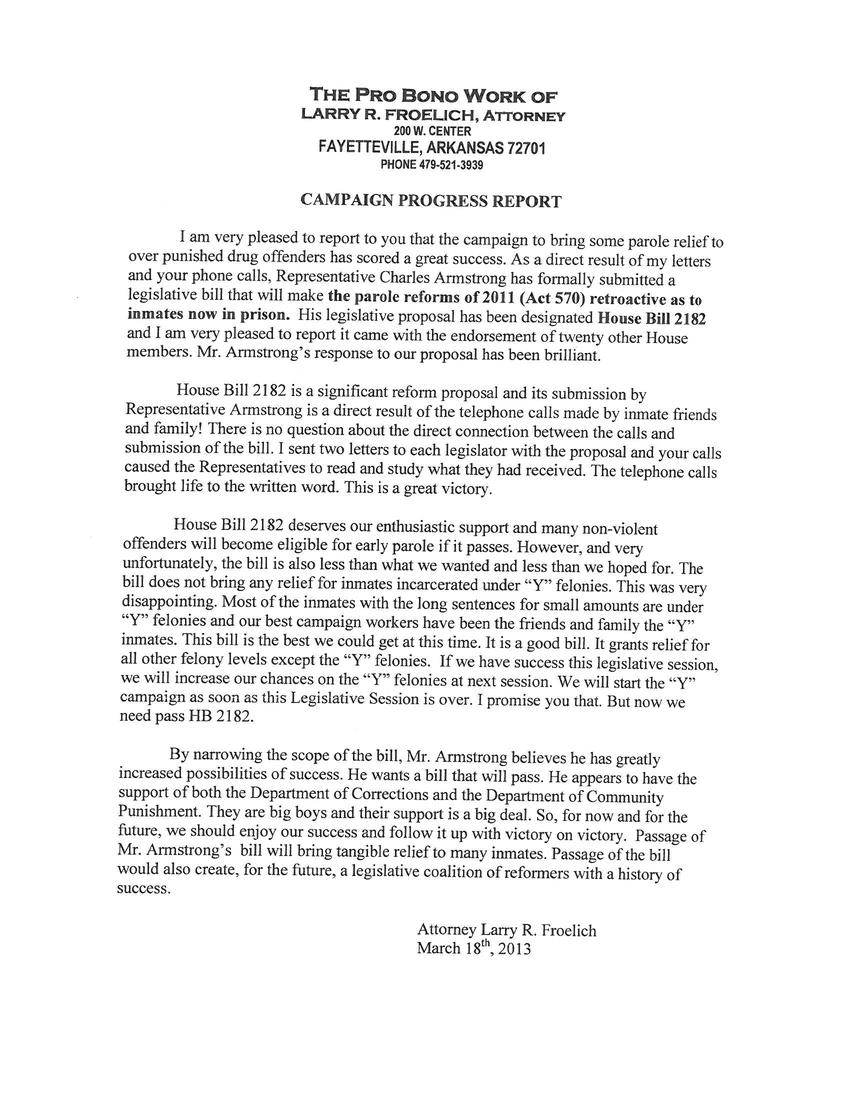 I am very pleased to report to you that the campaign to bring some parole relief to over punished drug offenders has scored a great success. As a direct result of my letters and your phone calls, Representative Charles Armstrong has formally submitted a legislative bill that will make the parole reforms of 2011 (Act 570) retroactive as to inmates now in prison. His legislative proposal has been designated House Bill 2182 and I am very pleased to report it came with the endorsement of twenty other House members. Mr. Armstrong's response to our proposal has been brilliant.

House Bill 2182 is a significant reform proposal and its submission by Representative Armstrong is a direct result of the telephone calls made by inmate friends and family! There is no question about the direct connection between the calls and submission of the bill. I sent two letters to each legislator with the proposal and your calls caused the Representatives to read and study what they had received. The telephone calls brought life to the written word. This is a great victory.

House Bill 2182 deserves our enthusiastic support and many non-violent offenders will become eligible for early parole if it passes. However, and very unfortunately, the bill is also less than what we wanted and less than we hoped for. The bill does not bring any relief for inmates incarcerated under "Y" felonies. This was very disappointing. Most of the inmates with the long sentences for small amounts are under "Y" felonies and our best campaign workers have been the friends and family of the "Y" inmates. This bill is the best we could get at this time. It is a good bill. It grants relief for all other felony levels except the "Y" felonies. If we have success this legislative session, we will increase our chances on the "Y" felonies at next session. We will start the "Y" campaign as soon as this Legislative Session is over. I promise you that. But now we need pass HB 2182.

By narrowing the scope of the bill, Mr. Armstrong believes he has greatly increased possibilities of success. He wants a bill that will pass. He appears to have the support of both the Department of Corrections and the Department of Community Punishment. They are big boys and their support is a big deal. So, for now and for the future, we should enjoy our success and follow it up with victory on victory. Passage of Mr. Armstrong's bill will bring tangible relief to many inmates. Passage of the bill would also create, for the future, a legislative coalition of reformers with a history of success.