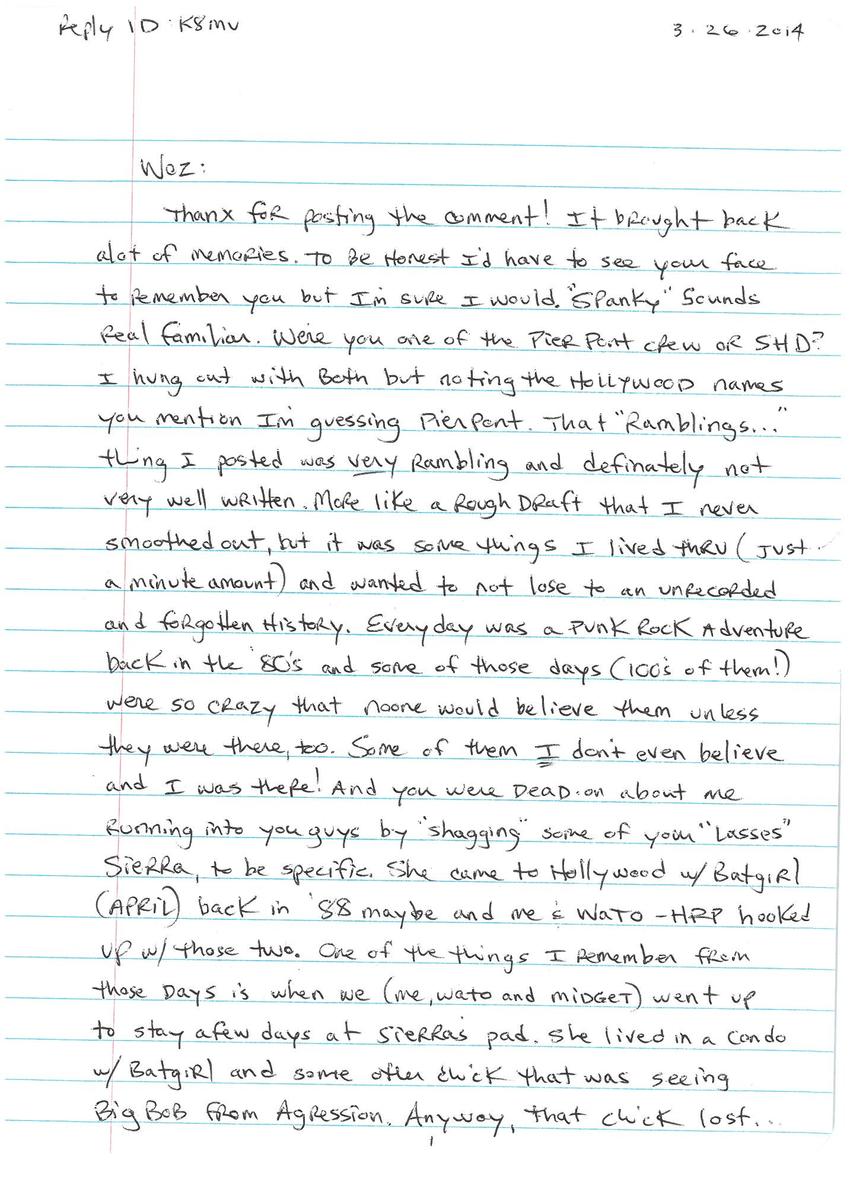 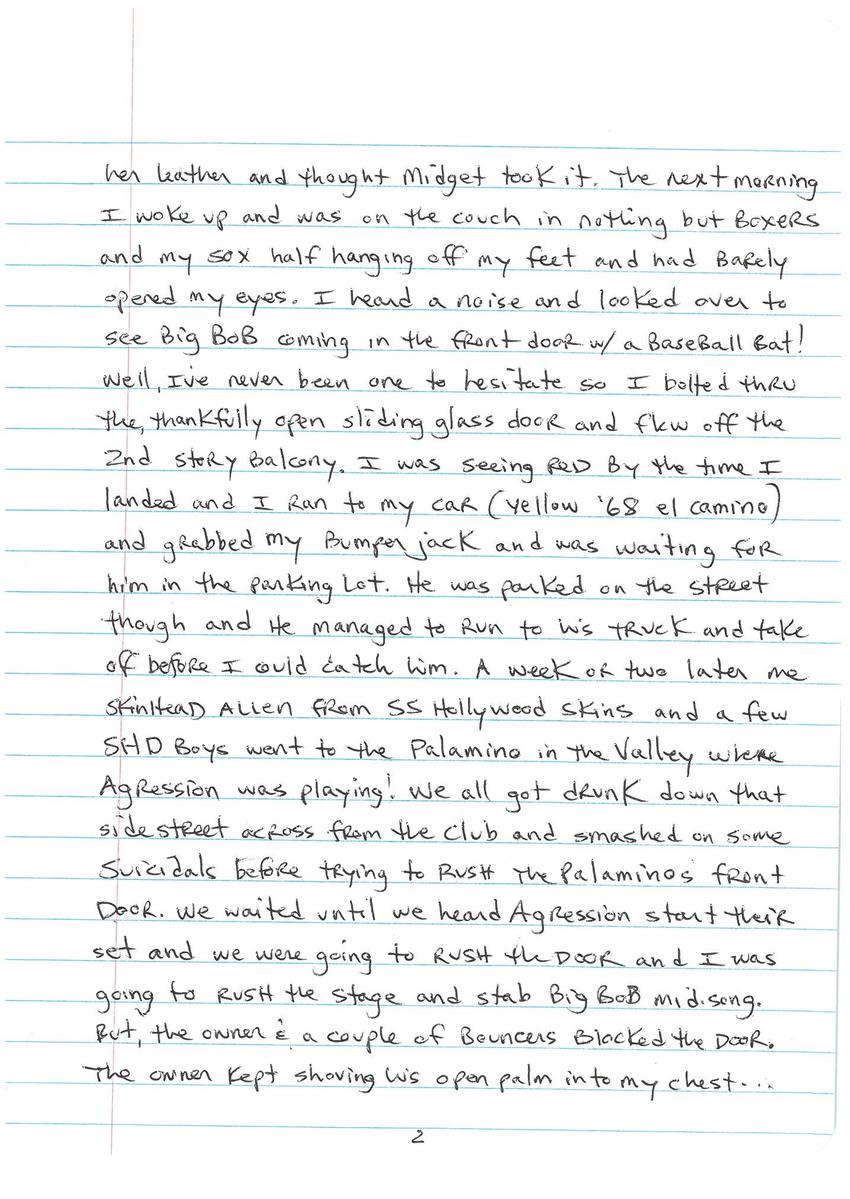 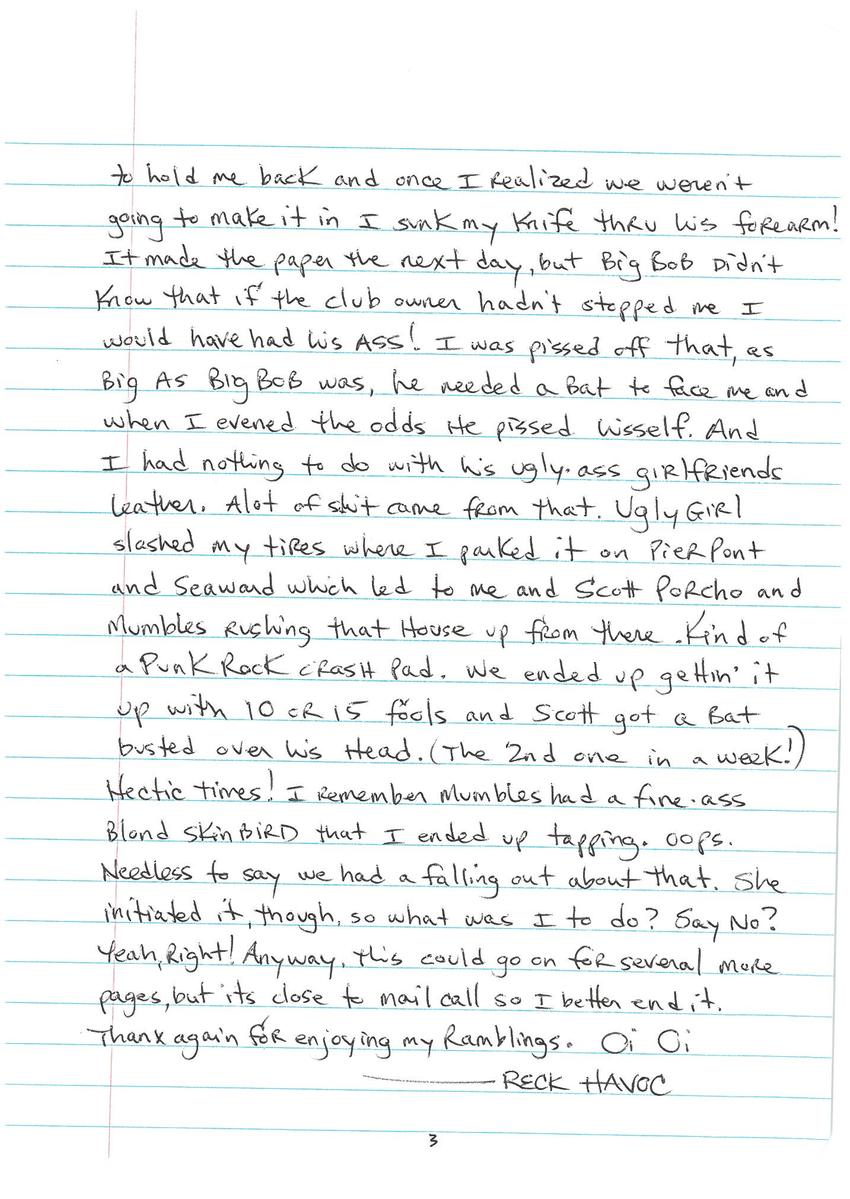 Thanx for posting the comment! It brought back a lot of memories. To be honest I'd have to see your face to remember you but I'm sure I would. "Spanky" sounds real familiar. Were you one of the Pier Pont Crew or SHD? I hung out with both but noting the Hollywood names you mention I'm guessing Pier Pont. That "Ramblings..." thing I posted was very rambling and definitely not very well written. More like a rough draft that I never smoothed out, but it was some things I lived thru (just a minute amount) and wanted to not lose to an unrecorded and forgotten history. Every day was a punk rock adventure back in the '80's and some of those days (100s of them!) were so crazy that no one would believe them unless they were there, too. Some of them I don't even believe an I was there! And you were dead on about me running into you guys by "shagging" some of your "Lasses". Sierra, to be specific. She came to Hollywood w/ Batgirl (April) back in '88 maybe me & Wato - HRP hooked up w/ those two. One of the things I remember from those days is when we (me, Wato and Midget) went up to stay a few days at Sierra's pad. She lived in a condo w/ Batgirl and some other chick that was seeing Big Bob from Aggression. Anyway, that chick lost her leather and thought Midget took it. The next morning I woke up and was on the couch in nothing but boxers an my sox half hanging off my feet and had barely opened my eyes. I heard a noise and looked over to see Big Bob coming in the front door w/ a baseball bat! Well, I've never been one to hesitate so I bolted thru the thankfully open sliding glass door and flew off the 2nd story balcony. I was seeing red by the time I landed and I ran to my car (yellow '68 El Camino) and grabbed my bumper jack and was waiting for him in the parking lot. He was parked on the street though and he managed to run to his truck and take off before I could catch him. A week or two later me, skinhead Allen from SS Skins and a few SHD boys went to the Palamino in the valley where Aggression was playing! We all got drunk down that side street across from the club ad smashed on some Suicidals before trying to rush the Palamino's front door. We waited until we heard Aggression start their set and we were going to rush the door and I was going to rush the stage and stab Big Bob mid-song. But, the owner & a couple of bouncers blocked the door. The owner kept shoving his open palm into my chest to hold me back and once I realized we weren't going to make it in I sunk my knife thru his forearm. It made the paper the next day, but Big Bob didn't know that if the club owner hadn't stopped me I would have had his ass! I was pissed off that, as big as Big Bob was, he needed a bat to face me and when I evened the odds he pissed his self. And I had nothing to do with his ugly ass girlfriend's leather. A lot of shit came from that. Ugly Girl slashed my tires where I parked it on Pier Pont and Seaward which led to me and Scott Porcho and Mumbles rushing that house up from there. Kind of a punk rock crash pad. We ended up getin' it up with 10 or 15 fools and Scott got a bat busted over his head. (The 2nd one in a week!) Hectic times! I remember Mumbles had a fine ass blond skin bird that I ended up tapping. Oops. Needless to say we had a falling out about that. She initiated it, though, so what was I to do? Say no? Yeah, right! Anyway, this could go on for several more pages, but it's close to mail call so I better end it.

Hey, I asked if I could do this for my community service and it's cool. No more Salvation Army for me! Typing these out is definitely more up my alley. Hope all is well with you when you get this. Looking forward to hearing more good news on your writ! X