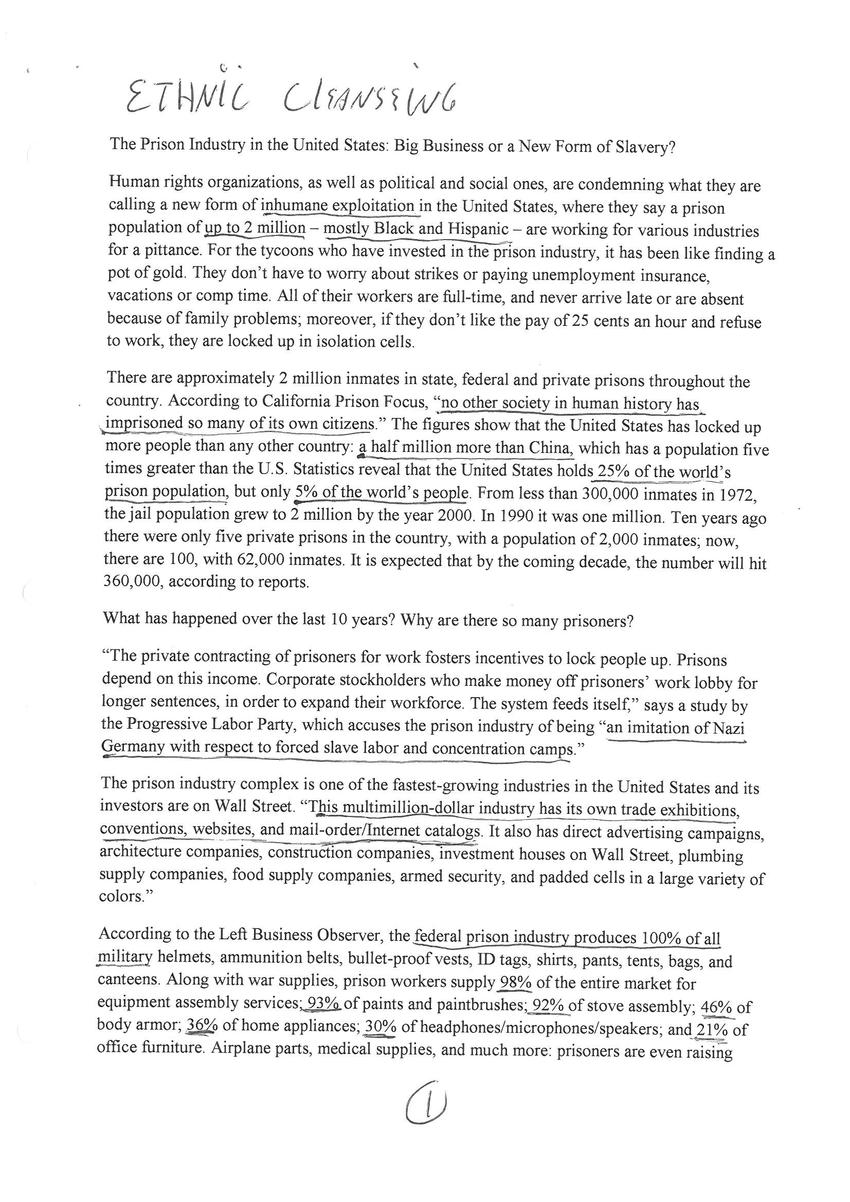 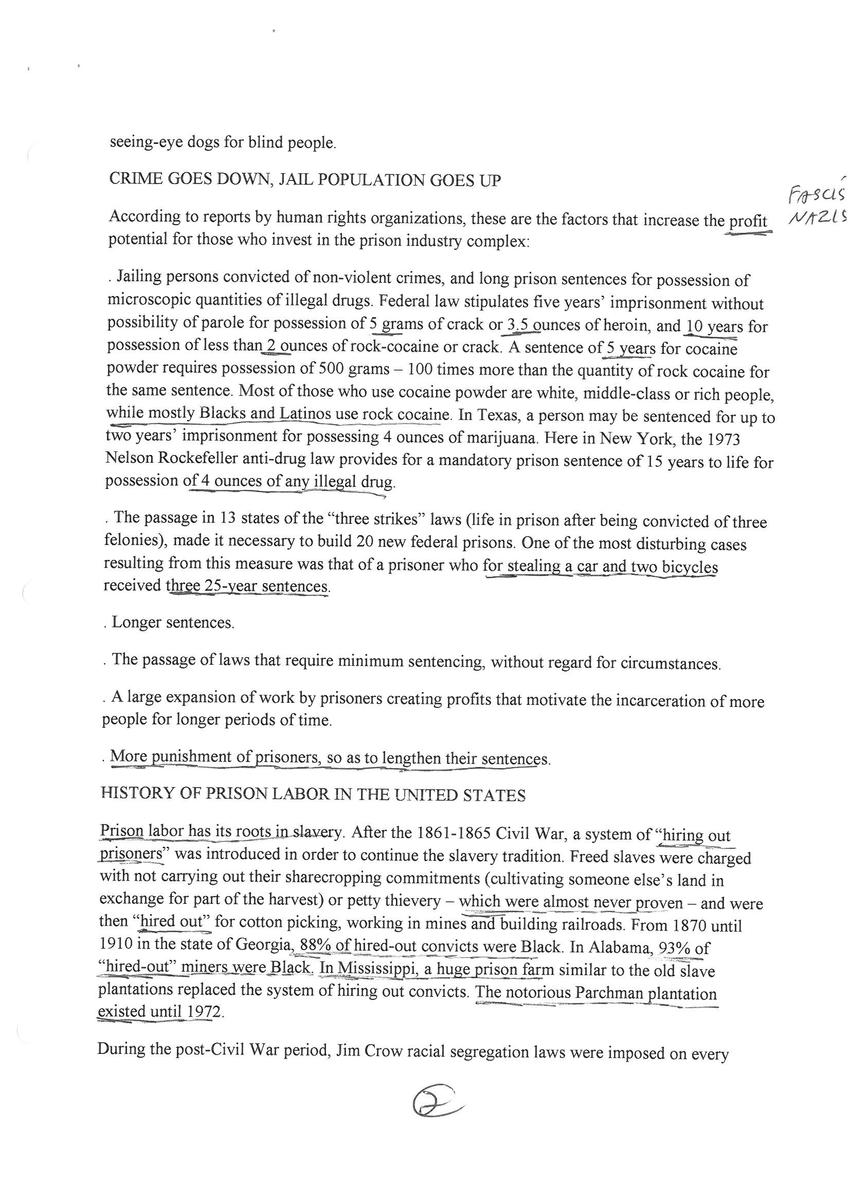 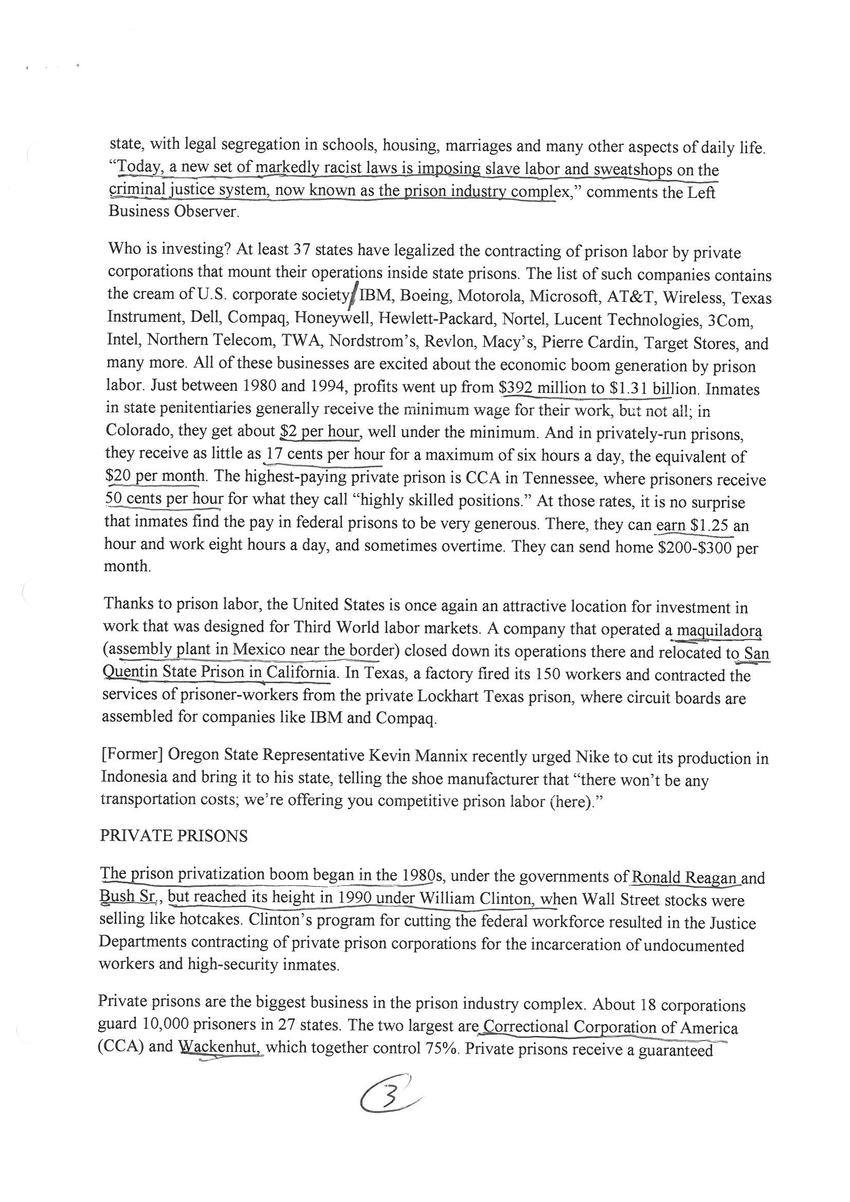 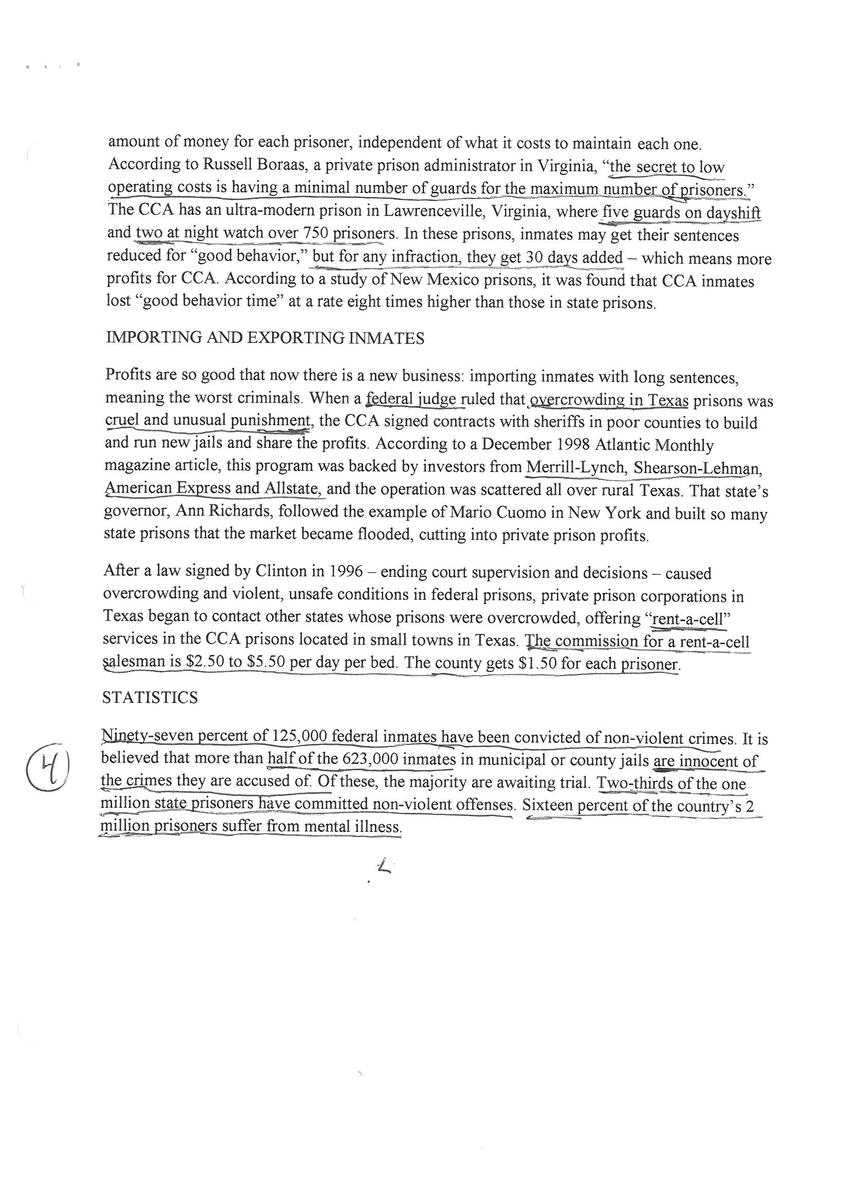 The Prison Industry in the United States: Big Business or a New Form of Slavery?

Human rights organizations, as well as political and social ones, are condemning what they are calling a new form of inhumane exploitation in the United States, where they say a prison population of up to 2 million - mostly Black and Hispanic - are working for various industries for a pittance. For the tycoons who have invested in the prison industry, it has been like finding a pot of gold. They don't have to worry about strikes or paying unemployment insurance, vacations or comp time. All of their workers are full-time, and never arrive late or are absent because of family problems; moreover, if they don't like the pay of 25 cents an hour and refuse to work, they are locked up in isolation cells.

There are approximately 2 million inmates in state, federal and private prisons throughout the country. According to California Prison Focus, "no other society in human history has imprisoned so many of its own citizens." The figures show that the United States has locked up more people than any other country: a half million more than China, which has a population five times greater than the U.S. Statistics reveal that the United States holds 25% of the world's prison population, but only 5% of the world's people. From less than 300,000 inmates in 1972, the jail population grew to 2 million by the year 2000. In 1990 it was one million. Ten years ago there were only five private prisons in the country, with a population of 2,000 inmates; now, there are 100, with 62,000 inmates. It is expected that by the coming decade, the number will hit 360,000, according to reports.

What has happened over the last 10 years? Why are there so many prisoners?

"The private contracting of prisoners for work fosters incentives to lock people up. Prisons depend on this income. Corporate stockholders who make money off prisoners' work lobby for longer sentences, in order to expand their workforce. The system feeds itself," says a study by the Progressive Labor Party, which accuses the prison industry of being "an imitation of Nazi Germany with respect to forced slave labor and concentration camps."

The prison industry complex is one of the fastest-growing industries in the United States and its investors are on Wall Street. "This multimillion-dollar industry has its own trade exhibitions, conventions, websites, and mail-order/Internet catalogs. It also has direct advertising campaigns, architecture companies, construction companies, investment houses on Wall Street, plumbing supply companies, armed security, and padded cells in a large variety of colors."

According to the Left Business Observer, the federal prison industry produced 100% of all military helmets, ammunition belts, bullet-proof vests, ID tags, shirts, pants, tents, bags, and canteens. Along with war supplies, prison workers supply 98% of the entire market for equipment assembly services; 93% of paints and paintbrushes; 92% of stove assembly; 46% of body armor; 36% of home appliances; 30% of headphones/microphones/speakers; and 21% of office furniture. Airplane parts, medical supplies, and much more: prisoners are even raising seeing-eye dogs for blind people.

According to reports by human rights organizations, these are the factors that increase the profit potential for those who invest in the prison industry complex:

- The passage in 13 states of the "three strikes" laws (life in prison after being convicted of three felonies), made it necessary to build 20 new federal prisons. One of the most disturbing cases resulting from this measure was that of a prisoner who for stealing a car and two bicycles received three 25-year sentences.

- The passage of laws that require minimum sentencing, without regard for circumstances.

- A large expansion of work by prisoners creating profits that motivate the incarceration of more people for longer periods of time.

- More punishment of prisoners, so as to lengthen their sentences.

HISTORY OF PRISON LABOR IN THE UNITED STATES

Prison labor has its roots in slavery. After the 1861-1865 Civil War, a system of "hiring out prisoners" was introduced in order to continue the slavery tradition. Freed slaves were charged with not carrying out their sharecropping commitments (cultivating someone else's land in exchange for part of the harvest) of petty thievery - which were almost never proven - and were then "hired out" for cotton picking, working in mines and building railroads. From 1870 until 1910 in the state of Georgia, 88% of hired-out convicts were Black. In Alabama, 93% of "hired-out" miners were Black. In Mississippi, a huge prison farm similar to the old slave plantations replaced the system of hiring out convicts. The notorious Parchman plantation existed until 1972.

During the post-Civil War period, Jim Crow racial segregation laws were imposed on every state, with legal segregation in schools, housing, marriages and many other aspects of daily life. "Today, a new set of markedly racist laws is imposing slave labor and sweatshops of the criminal justice system, now known as the prison industry complex," comments the Left Business Observer.

Who is investing? At least 37 states have legalized the contracting of prison labor by private corporations that mount their operations inside state prisons. The list of such companies contains the cream of U.S. corporate society / IBM, Boeing, Motorola, Microsoft, AT&T, Wireless, Texas Instrument, Dell, Compaq, Honeywell, Hewlett-Packard, Nortel, Lucent Technologies, 3Com, Intel, Northern Telecom, TWA, Nordstrom's, Revlon, Macy's, Pierre Cardin, Target Stores, and many more. All of these businesses are excited about the economic boom generation by prison labor. Just between 1980 and 1994, profits went up from $392 million to $1.31 billion. Inmates in state penitentiaries generally receive the minimum wage for their work, but not all; in Colorado, they get about $2 per hour, well under the minimum. And in privately-run prisons, they receive as little as 17 cents per hour for a maximum of six hours a day, the equivalent of $20 per month. The highest-paying private person is CCA in Tennessee, where prisoners receive 50 cents per hour for what they call "highly skilled positions." At those rates, it is no surprise that inmates find the pay in federal prisons to be very generous. There, they can earn $1.25 an hour and work eight hours a day, and sometimes overtime. They can send home $200-$300 per month.

Thanks to prison labor, the United States is once again an attractive location for investment in work that was designed for Third World labor markets. A company that operated a maquiladora (assembly plant in Mexico near the border) closed down its operations there and relocated to San Quentin State Prison in California. In Texas, a factory fires its 150 workers and contracted the services of prisoner-workers from the private Lockhart Texas prison, where circuit boards are assembled for companies like IBM and Compaq.

[Former] Oregon State Representative Kevin Mannix recently urged Nike to cut its production in Indonesia and bring it to his state, telling the show manufacturer that "there won't be any transportation costs; we're offering you competitive prison labor (here)."

The prison privatization boom began in the 1980s, under the governments of Ronald Reagan and Bush Sr., but reached its height in 1990 under William Clinton, when Wall Street stocks were selling like hotcakes. Clinton's program for cutting the federal workforce resulted in the Justice Departments contracting of private prison corporations for the incarceration of undocumented workers and high-security inmates.

Private prisons are the biggest business in the prison industry complex. About 18 corporations guard 10,000 prisoners in 27 states. The two largest are Correctional Corporation of America (CCA) and Wackenhut, which together control 75%. Private prisons receive a guaranteed amount of money for each prisoner, independent of what it costs to maintain each one. According to Russell Boraas, a private prison administrator in Virginia, "the secret to low operation costs is having a minimal number of guards for the maximum number of prisoners." The CCA has an ultra-modern prison in Lawrenceville, Virginia, where five guards in dayshift and two at night watch over 750 prisoners. In these prisons, inmates may get their sentences reduced for "good behaviour," but for any infraction, they get 30 days added - which means more profits for CCA. According to a study of New Mexico prisons, it was found that CCA inmates lost "good behaviour time" at a rate eight times higher than those in state prisons.

Profits are so good that now there is a new business: importing inmates with long sentences, meaning the worst criminals. When a federal judge ruled that overcrowding in Texas prisons was cruel and unusual punishment, the CCA signed contracts with sheriffs in poor counties to build and run new jails and share the profits. According to a December 1998 Atlantic Monthly magazine article, this program was backed by investors from Merrill-Lynch, Shearson-Lehman, American Express and Allstate, and the operation was scattered all over rural Texas. That state's governor, Ann Richards, followed the example of Mario Cuomo in New York and built so many state prisons that the market became flooded, cutting into private prison profits.

After a law signed by Clinton in 1996 - ending court supervision and decisions - caused overcrowding and violent, unsafe conditions in federal prisons, private prison corporation in Texas began to contact other states whose prisons were overcrowded, offering "rent-a-cell" services in the CCA prisons located in small towns in Texas. The commission for a rent-a-cell salesman is $2.50 to $5.50 per day per bed. The county gets $1.50 for each prisoner.

Ninety-seven percent of 125,000 federal inmates have been convicted of non-violent crimes. It is believed that more than half of the 623,000 inmates in municipal or county jails are innocent of the crimes they are accused of. Of these, the majority are awaiting trial. Two-thirds of the one million state prisoners have committed non-violent offenses. Sixteen percent of the country's 2 million prisoners suffer from mental illness.