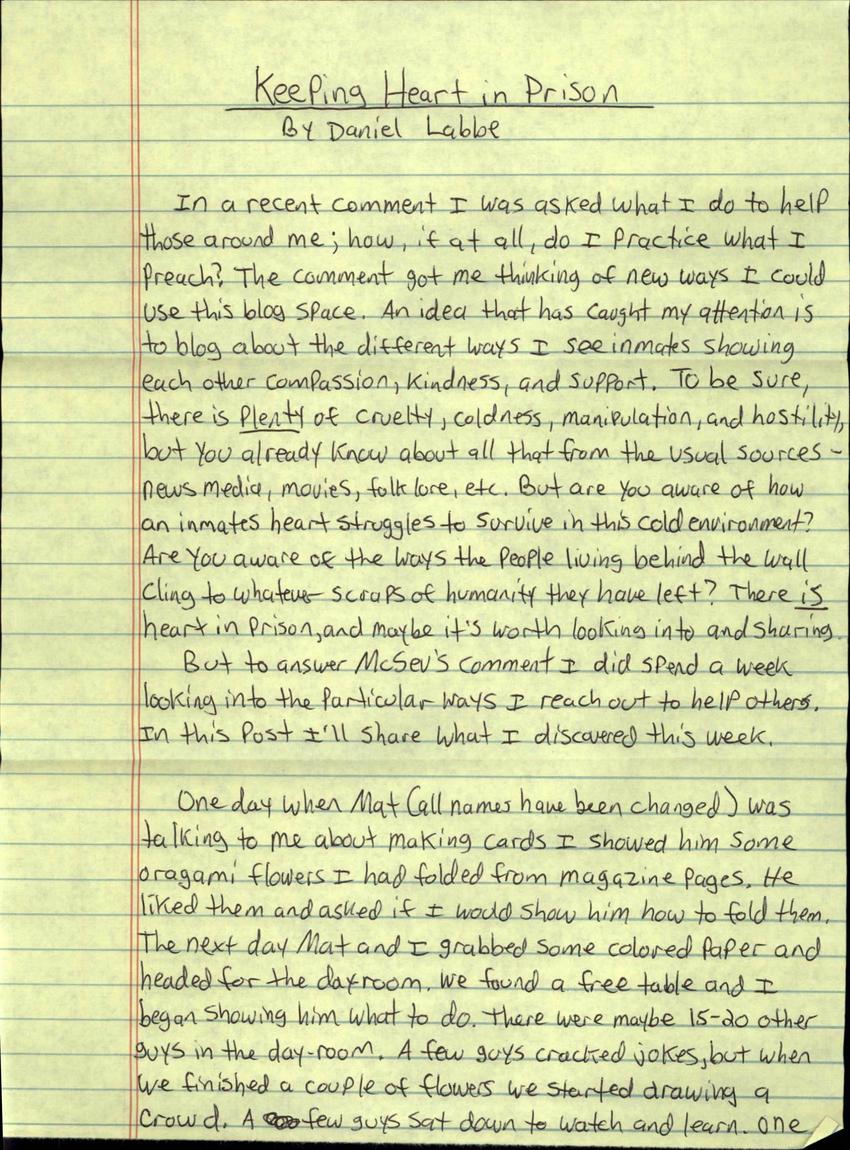 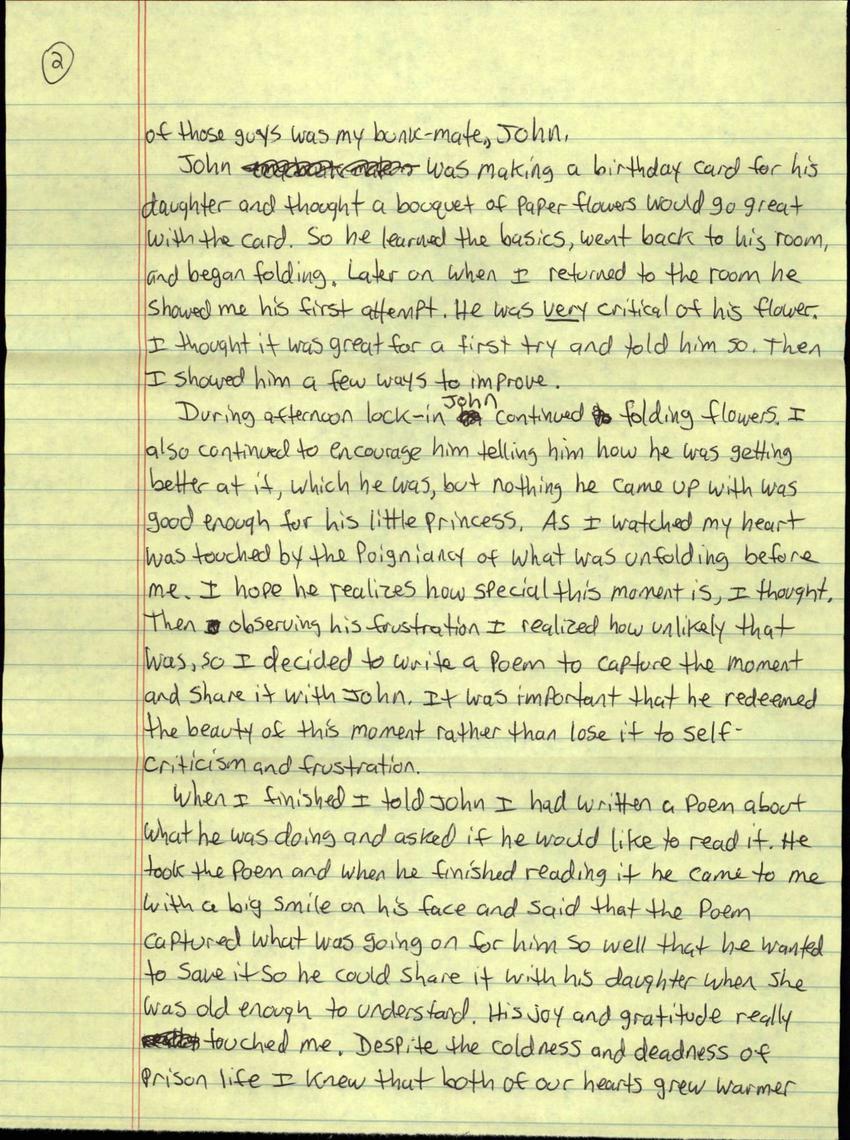 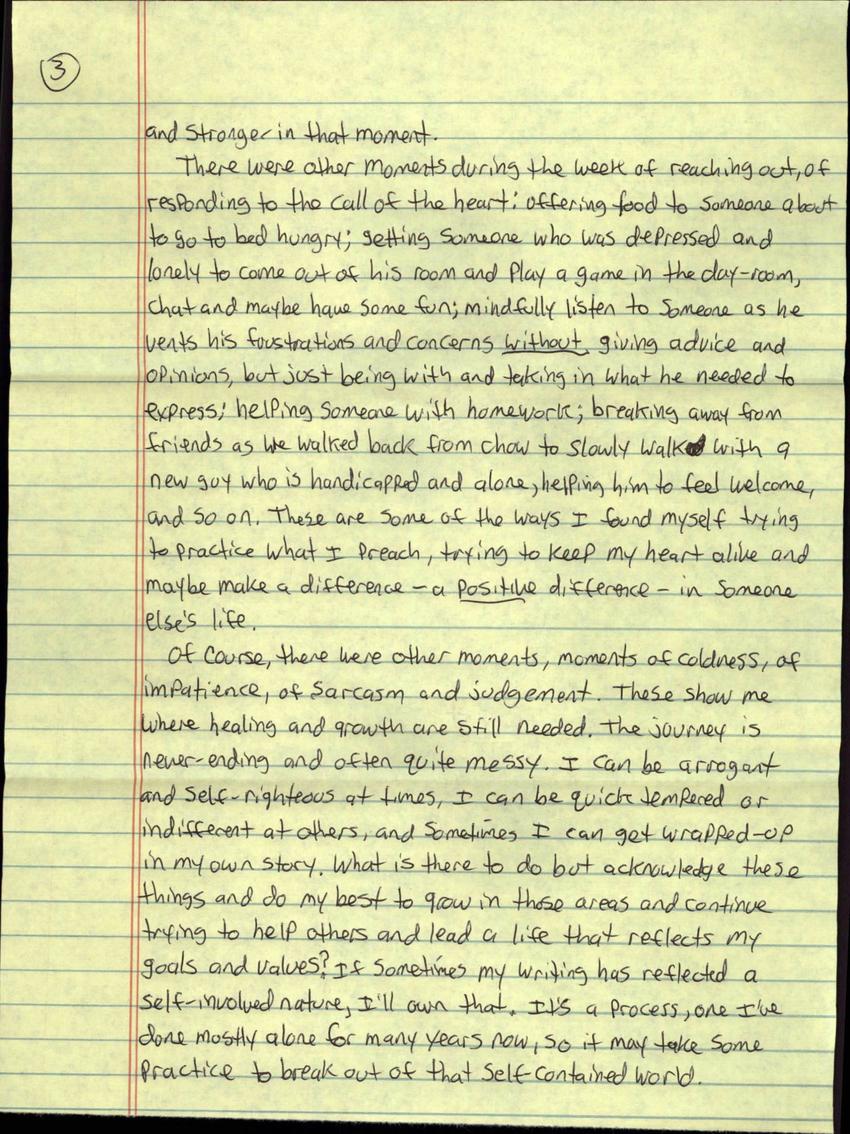 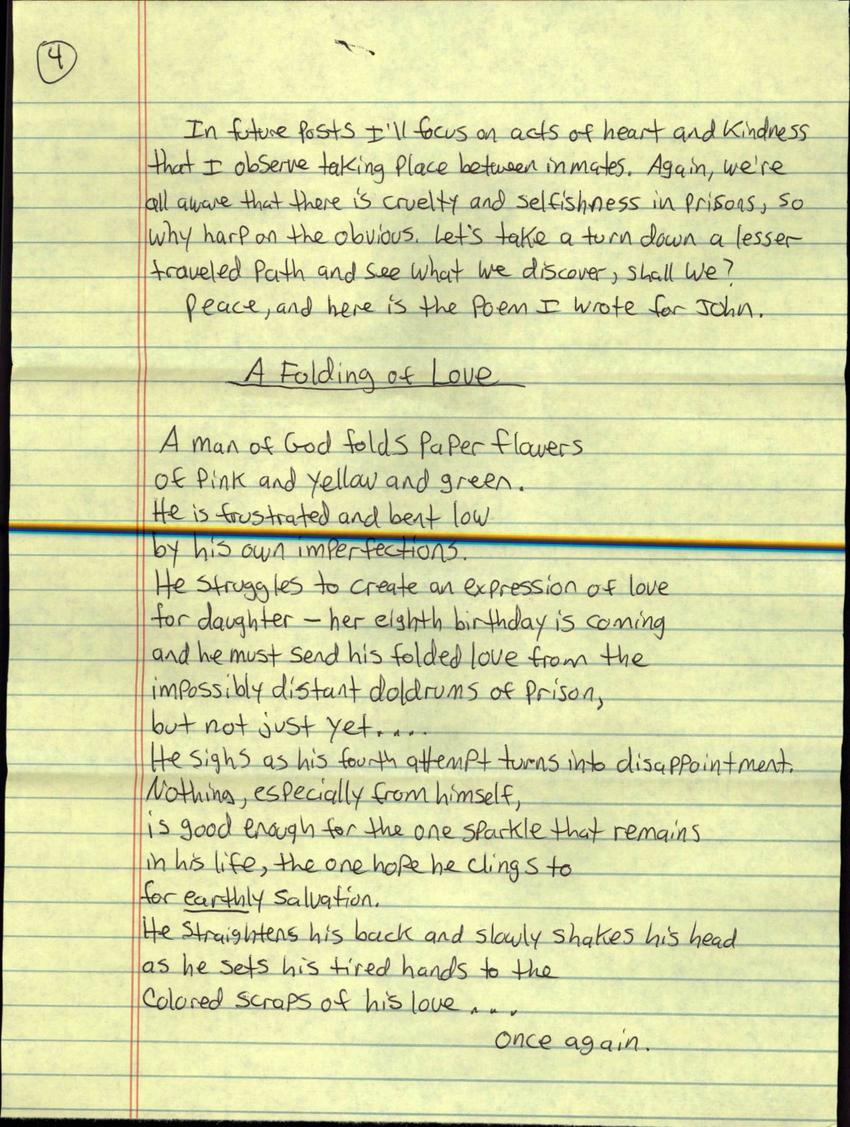 In a recent comment I was asked what I do to help those around me; how, if at all, do I practice what I preach? The comment got me thinking of new ways I could use this blog space. An idea that has caught my attention is to blog about the different ways I see inmates showing each other compassion, kindness, and support. To be sure, there is plenty of cruelty, coldness, manipulation, and hostility, but you already know about all that from the usual sources -news media, movies, folklore, ect. But are you aware of how an inmates heart struggles to survive in this cold environment? Are you aware of the ways the people living behind the wall cling to whatever scraps of humanity they have left? There is heart in prison, and maybe it's worth looking into and sharing.
But to answer McSev's comment I did spend a week looking into the particular ways I reach out to help others. In this post I'll share what I discovered this week.

One day when Mat (all names have been changed) was talking to me about making cards I showed him some origami flowers I had folded from magazine pages. he liked them and asked if I would show him how to fold them. The next day mat and I grabbed some colored paper and headed for the day-room. We found a free table and I began showing him what to do. There were maybe 15-20 other guys in the day-room. A few guys cracked jokes, but when we finished a couple of flowers we started drawing a crowd. A few guys sat down to watch and learn. One of those guys was my bunk-mate, John.
John was making a birthday card for his daughter and thought a bouquet of paper flowers would go great with the card. So he learned the basics, went back to his room, and began folding. Later on when I returned to the room he showed his first attempt. He was very critical of his flower. I thought it was great for a first try and told him so. Then I showed him a few ways to improve.
During afternoon lock-in, John continued folding flowers. I also continued to encourage him telling him how he was getting better at it, which he was, but nothing he came up with was good enough for his little princess. As I watched my heart was touched by the Poignancy of what was unfolding before me. I hope he realizes how special this moment is, I thought. Then observing his frustration I realized how unlikely that was, so I decided to write a poem to capture the moment and share it with John. It was important that he redeemed the beauty of this moment rather than lose it to self-criticism and frustration.
When I finished I told John I had written a poem about what he was doing and asked if he would like to read it. He took the poem and when he finished reading it he came to me with a big smile on his face and said that the poem captured what was going on for him so well that he wanted to save it so he could share it with his daughter when she was old enough to understand. His joy and gratitude really touched me. Despite the coldness and deadness of prison life I knew that both of out hearts grew warmer and stronger in that moment.
There were other moments during the week of reaching out, of responding to the call of the heart; offering food to someone about to go to bed hungry; getting someone who was depressed and lonely to come out of his room and play a game in the day-room, chat and maybe have some fun; mindful listen to someone as he vents his frustrations and concerns without giving advice and opinions, but just being with and taking in what he needed to express; helping someone with homework; breaking away from friends as we walked back from chow to slowly walk with a new guy who is handicapped and alone, helping him to feel welcome, and so on. These are some of the ways I found myself trying to practice what I preach, trying to keep my heart alive and maybe make a difference- a positive difference- in someone else's life.
Of course, there were other moments, moments of coldness, of impatience, of sarcasm and judgement. These show me where healing and growth are still needed. The journey is never-ending and often quite messy. I can be arrogant and self-righteous at times, I can be quick tempered or indifferent at others, and sometimes I can get wrapped-up in my own story. What is there to do but acknowledge these things and do my best and lead a life that reflects my goals and values? If sometimes my writing has reflected a self-involved nature, I'll own that. It's a process, one I've done mostly alone for many years now, so it may talk some practice to break out of that self-contained world.

In future posts I'll focus on acts of heart and kindness that I observe taking place between inmates. Again, we're all aware that there is cruelty and selfishness in prisons, so why harp on the obvious. Let's take a turn down a lesser traveled path and see what we discover, shall we?

Peace, and here is the poem I wrote for John.

A Folding of Love

A man of God fold paper flowers
of pink and yellow and green.
He is frustrated and bent low
by his own imperfections.
he struggles to create an expression of love
for daughter - her eighth birthday is coming
and he must send his folded love from the impossibly distant doldrums of prison,
but not just yet...
he sights as his fourth attempts turns into disappointment.
Nothing, especially from himself,
is good enough for the one sparkle that remains
in his life, the one hope he clings to
fore earthly salvation.
He straightens his back and slowly shakes his head
as he sets his tired hands to the colored scraps of his love...
Once again.

This comment has been flagged and is currently under review.