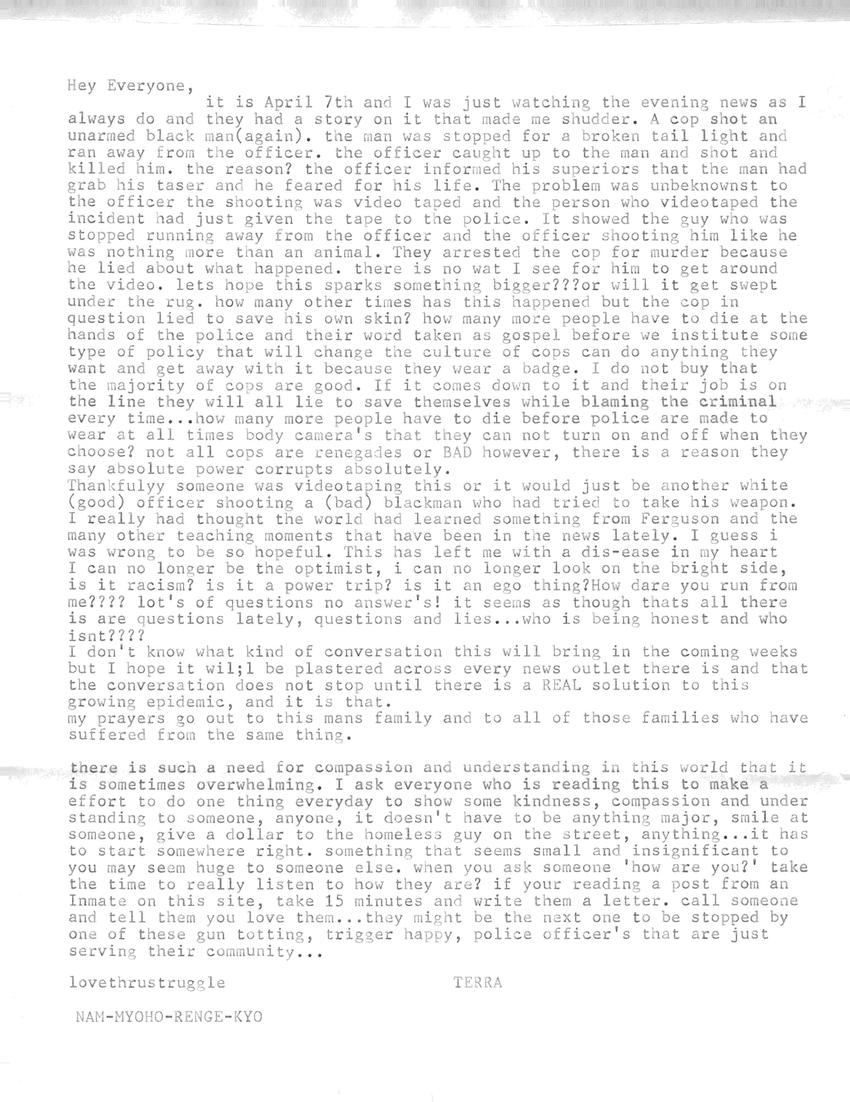 It is April 7, and I was just watching the evening news as I always do. They had a story on it that made me shudder.

A cop shot an unarmed black man (again). The man was stopped for a broken taillight and ran away from the officer. The officer caught up to the man and shot and killed him. The reason? The officer informed his superiors that the man had grabbed his taser, and he feared for his life.

The problem, unbeknown to the officer, was that the shooting was videotaped and the person who videotaped it gave the footage to the police. It showed the guy who stopped running away form the office, and the officer shooting him like he was nothing more than an animal. They arrested the cop for murder because he lied about what happened.

There is no way I see for him to get around the video. Let's hope this sparks something bigger. Or will it get swept under the rug? How many other times has this happened but the cop in question lied to save his own skin? How many more people have to die at the hands of the police and their word taken as gospel before we institute some type of policy that will change the culture of cops? They can do anything they want and get away with it because they wear a badge.

I do not buy that the majority of cops are good. If it comes down to it and their job is on the line, they will all lie to save themselves while blaming the criminal every time. How many more people have to die before the police are made to wear body cameras at all times that they cannot turn off when they choose? Not all cops are renegades or bad. However, there is a reason they say absolute power corrupts.

Thankfully, someone was recording this time or it would just be another white (good) officer shooting a black (bad) man who tried to take his weapon. I really had thought the world had learned something from Ferguson and the many other teaching moments that have been in the news lately. I guess I was wrong to be so hopeful. This has left me with a disease in my heart. I can no longer say that I am an optimist. I can no longer look on the bright side. Is it racism? Is it a power trip? Is it an ego thing? "How dare you run from me?" Lots of questions and no answers! It seems that's all there is lately, questions and lies. Who is being honest and who isn't?

I don't know what kind of conversation this will bring in the coming weeks, but I hope that it will be plastered across every news outlet there is and that the conversation does not stop until there is a REAL solution to growing epidemic. And that is that.

My prayers go out to this man's family and to all of those families who have suffered from the same thing.

There is such a need for compassion and understanding in this world that it is sometimes overwhelming. I ask everyone who is reading this to make an effort to do one kind thing every day, to show compassion to someone, to understand someone—anyone. It doesn't have to be anything major. Smile at someone. Give a dollar to the homeless man on the street. Anything. It has to start somewhere, right? Something that seems small and insignificant to you may seem huge to someone else. When you ask someone "How are you?," take the time to really listen to how they are. If you are reading a post from an inmate on this site, take fifteen minutes to write them a letter. Call someone and tell them you love them. They might be the next one to be stopped by one of those gun totting, trigger-happy police officers that are just serving their community.