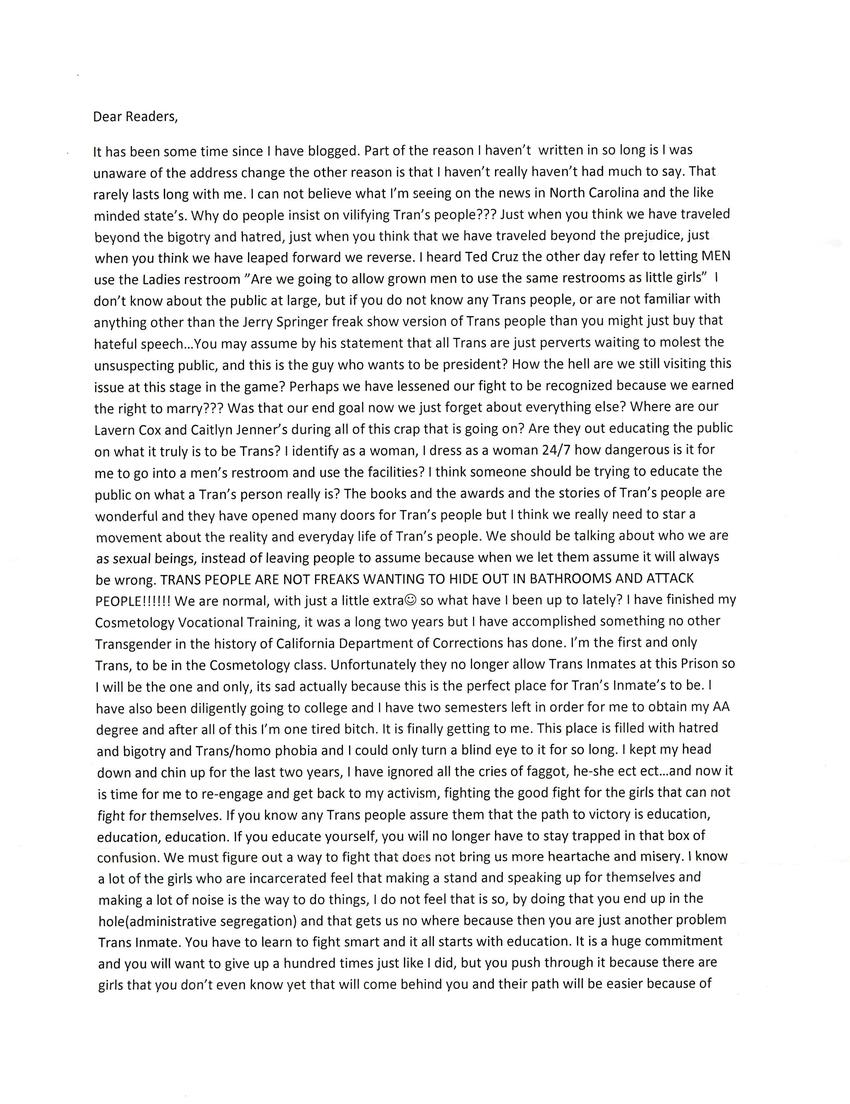 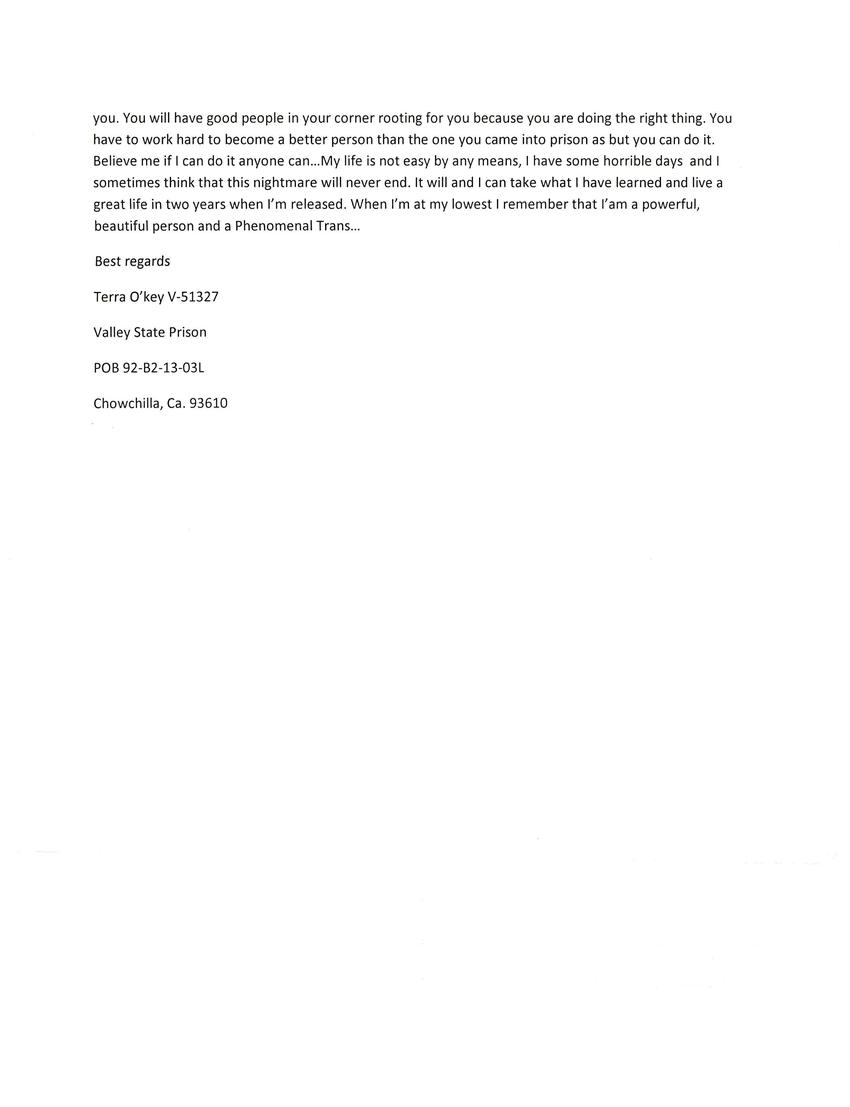 It has been some time since I have blogged. Part of the reason I haven't written in so long is I was unaware of the address change. The other reason is that I haven't really had much to say. That rarely lasts long with me.

I cannot believe what I'm seeing on the news in North Carolina and the like minded states. Why do people insist on vilifying trans people? Just when you think we have traveled beyond the bigotry and hatred, just when you think that we have traveled beyond the prejudice, just when you think we have leaped forward, we reverse. I heard Ted Cruz the other day refer to letting MEN use the ladies' restroom. "Are we going to allow grown men to use the same restrooms as little girls?" I don't know about the public at large, but if you do not know any trans people or are not familiar with anything other than the Jerry Springer freak show version of trans people, then you might just buy that hateful speech. You may assume by his statement that all trans are just perverts waiting to molest the unsuspecting public. And this is the guy who wants to be president?

How the hell are we still visiting this issue at this stage in the game? Was tha tour end goal now? We just forget about everything else? Where are our Lavern Cox and Caitlyn Jenners during all of this crap that is going on? Are they out educating the public on what it truly is to be trans? I identify as a woman, I dress as a woman 24/7. How dangerous is it for me to go into a men's restroom and use the facilities?

I think someone should be trying to educate the public on what a trans person really is. The books and the awards and the stories of trans people are wonderful, and they have opened many doors for trans people. But I think we really need to star a movement about the reality and everyday life of trans people. We should be talking about who we are as sexual beings instead of leaving people to assume. Because when we let them assume, it will always be wrong. TRANS PEOPLE ARE NOT FREAKS WANTING TO HIDE OUT IN BATHROOMS AND ATTACK PEOPLE! We are normal with just a little extra :).

So what have I been up to lately? I have finished my cosmetology vocational training. It was a long two years, but I have accomplished something no other transgender in the history of California Department of Corrections has done. I'm the first and only trans to be in the cosmetology class. Unfortunately, they no longer allow trans inmates at this prison so I will be the one and only. It's sad actually because this is the perfect place for trans inmates to be. I have also been diligently going to college, and I have two semesters left in order for me to obtain my AA degree. And after all of this, I'm one tired bitch.

It is finally getting to me. This place is filled with hatred and bigotry and trans/homophobia, and I could only turn a blind eye to it for so long. I kept my head down and chin up for the last two years. I have ignored all the cries of "faggot", "he-she", etc. And now it is time for me to reengage and get back to my activism. Fighting the good fight for the girls that cannot fight for themselves. If you know any trans people, assure them that the path to victory is education, education, education. If you educate yourself, you will no longer have to stay trapped in that box of confusion. We must figure out a way to fight that does not bring us more heartache and misery.

I know a lot of girls who are incarcerated feel that making a stand and speaking up for themselves and making a lot of noise is the way to do things. I do not feel that is so. By doing that, you end up in the hole (administrative segregation) and that gets us nowhere. Because then you are just another problem trans inmate. You have to learn to fight smart and it all starts with education. It is a huge commitment, and you give up a hundred times just like I did. But you push through it, because there are girls that you don't even know yet that will come behind you and their path will be easier because of you. You will have good people in your corner rooting for you because you are doing the right thing. You have to work hard to become a better person than the one you came into prison, but you can do it.

Believe me, if I can do it, anyone can. My life is not easy by any means. I have some horrible days, and I sometimes think that this nightmare will never end. It will, and I can take what I have learned and live a great life in two years when I'm released. When I'm at my lowest, I remember that I'm a powerful, beautiful person. And a phenomenal trans.

Congratulations on finishing your cosmetology program and on making such great practice toward your associate's degree! Please know that despite the recent election outcome and the hateful speech being covered by the media, there are still plenty of us out here who care about you. We care about our prison population, we care about the transgender people in our community, and we worry about the safety of both of the groups -- and especially of those who fit into both categories. Please know you're not alone, and keep fighting for your rights. I'm so glad you realize that you're a beautiful and powerful person. Never lose that.