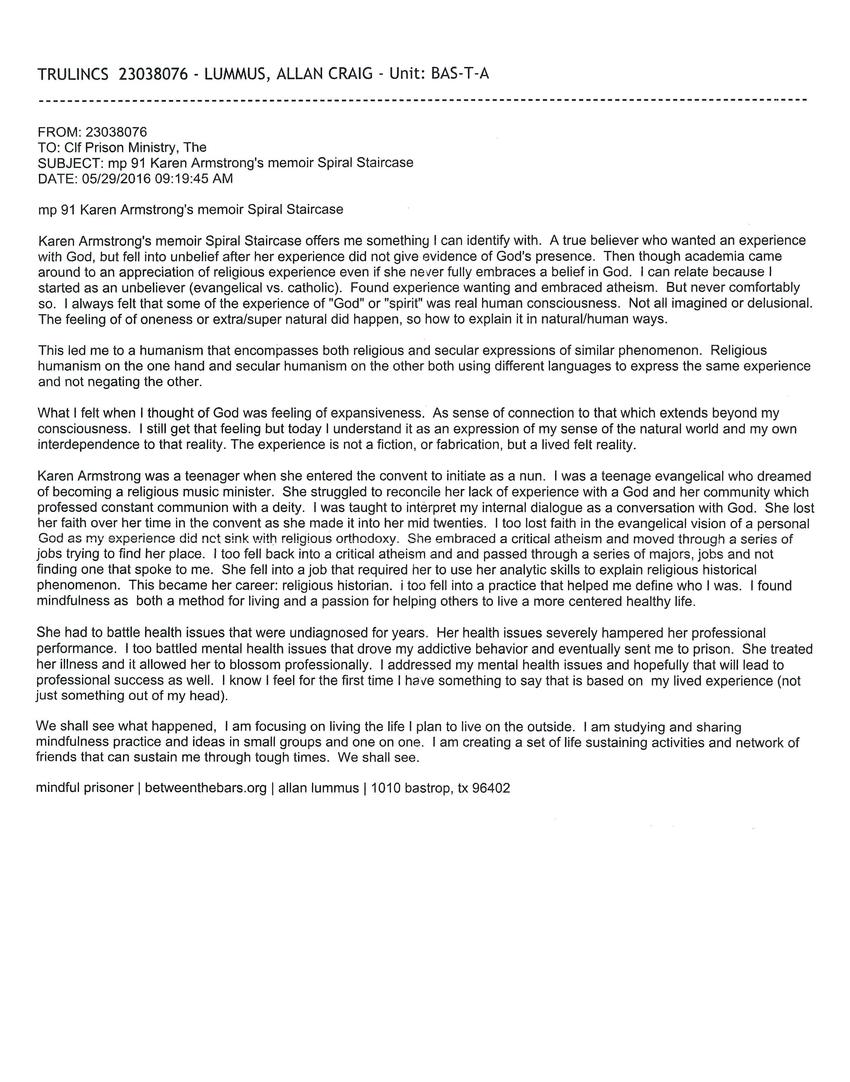 Karen Armstrong's memoir Spiral Staircase offers me something I can identify with. A true believer who wanted an experience with God, but fell into disbelief after her experience did not give evidence of God's presence. Then though academia came around to an appreciation of religious experience evne if she never fully embraces a belief in God. I can relate because I started as a disbeliever (Evangelical vs. Catholic). Found evidence wanting and embraced Atheism. But never comfortably so. I always felt that some of the experience of "God" or "spirit" was the real human consciousness. Not all imagined or delusional. The feeling of oneness or extra/supernatural did happen, so how to explain it in natural/human ways.

What I felt when I thought of God was feeling of expansiveness. As sense of connection to that which extends beyond my consciousness. I still get that feeling but today I understand it as an expression of my sense of the natural world and my own interdependence to that reality. The experience is not fiction or fabrication, but a lived felt reality.

Karen Armstrong was a teenager when she entered the convent to initiate as a nun. I was a teenager Evangelical who dreamed of becoming a religious music minister. She struggled to reconcile with her lack of experience with a God and her community which professed constant communion with a deity. I was taught to interpret my internal dialogue as a conversation with God. She lost her faith over her time in the convent as she made it into her mid twenties. I too lost faith in the Evangelical vision of a personal God as my experience did not sync with religious orthodoxy. She embraced a critical Atheism and moved through a series of jobs trying to find her place. I too fell back into critical Atheism and passed through a series of majors and jobs, not finding one that spoke to me. She feel into a job that required her to use her analytical skills to explain religious historical phenomenon. This became her career: religious historian. I too fell into a practice that helped me define who I was. I found mindfulness as both a method for living and a passion for helping others to live a more centered healthy life.

We shall see what happens. I am focusing on living the life I plan to live on the outside. I am studying and sharing mindful practices and ideas in small groups and one-on-one. I am creating a set of life-sustaining activities and a network of friends that can sustain me through tough times. We shall see.