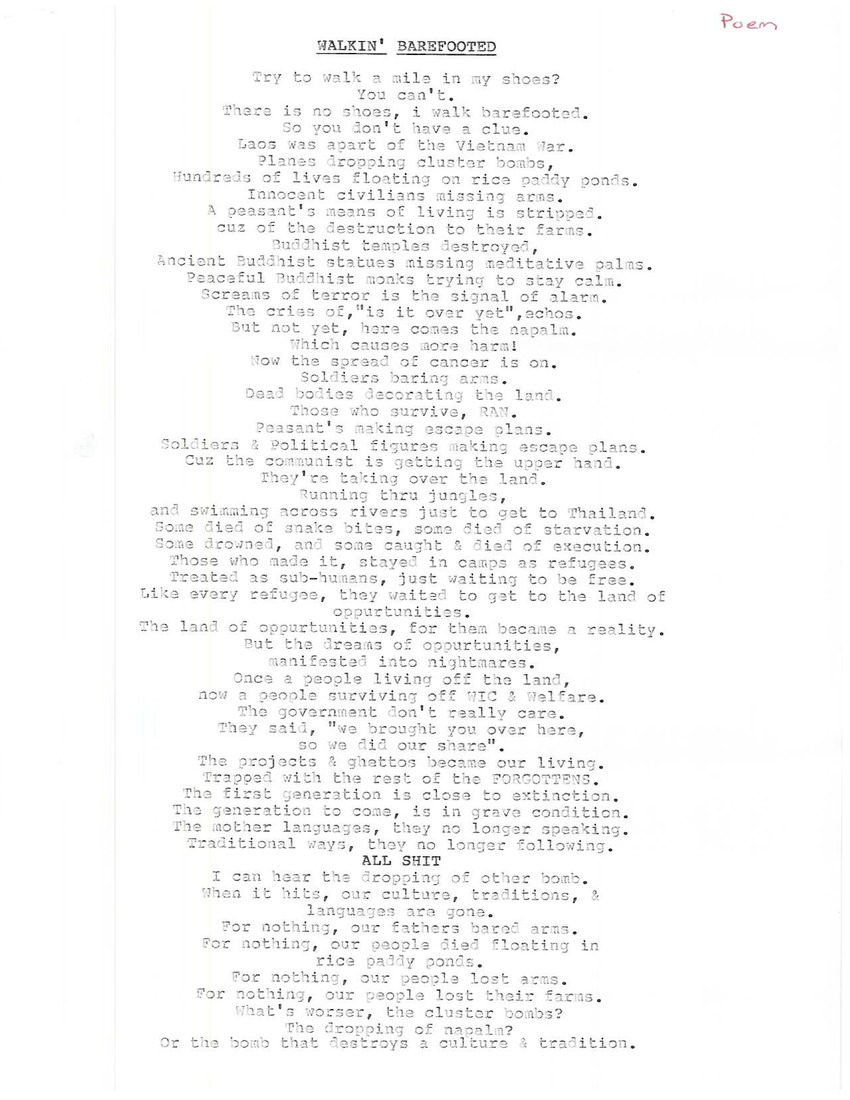 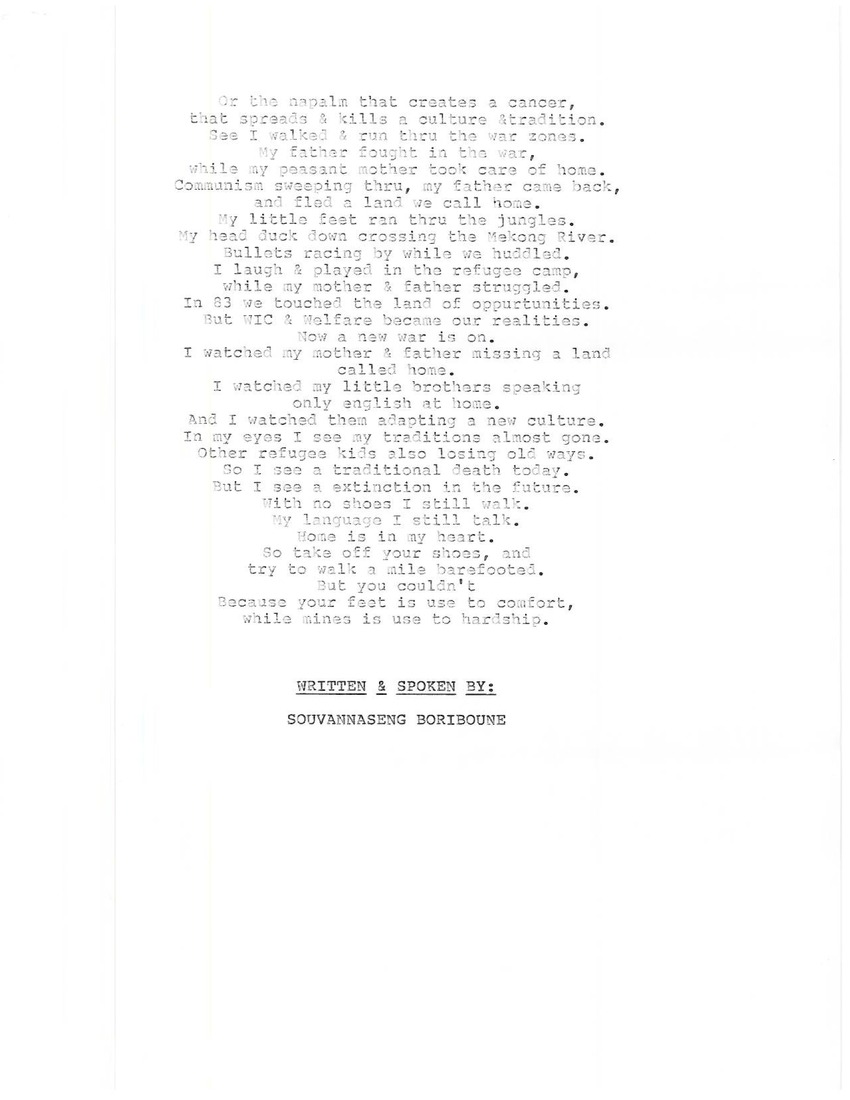 Try to walk a mile in my shoes?
You can't.
There is no shoes, I walk barefooted.
So you don't have a clue.
Laos was a part of the Vietnam War.
Planes dropping cluster bombs,
Hundreds of lives floating on rice paddy ponds.
Innocent civilians missing arms.
A peasant's means of living is stripped.
cuz of th destruction to their farms.
Buddhist temples destroyed,
Ancient Buddhist statues missing meditative palms.
Peaceful Buddhist monks trying to stay calm.
Screams of terror is th signal of alarm.
The cries of, "is it over yet", echos.
But not yet, here comes the napalm.
Which causes more harm!
Now the spread of cancer is on.
Soldiers baring arms.
Dead bodies decorating the land.
Those who survive, RAN.
Peasant's making escape plans.
Soldiers & Political figures making escape plans.
Cuz the communist is getting the upper hand.
Running thru jungles,
and swimming across rivers just to get to Thailand.
Some died of snake bites, some died of starvation.
Some drowned, and some caught & died of execution.
Those who made it, stayed in camps as refugees.
Treated as sub-humans, just waiting to be free.
Like every refugee, they waited to get to the land of
opportunities.
The land of opportunities, for them became a reality.
But the dreams of opportunities,
manifested into nightmares.
Once a people living off the land,
now a people surviving off WIC & Welfare.
The government don't really care.
They said, "we brought you over here,
so we did our share".
The projects & ghettos became our living.
Trapped with the rest of the FORGOTTENS.
The first generation is close to extinction.
The generation to come , is in grave condition.
The mother languages, they no longer speaking.
Traditional ways, they no longer following.
ALL SHIT
I can hear the dropping of the bomb.
When it hits, our culture, traditions, &
languages are gone.
For nothing, our fathers bared arms.
For nothing, our people died floating in
rice paddy ponds.
For nothing, our people lost arms.
For nothing, our people lost their farms.
What's worser, the cluster bombs?
The dropping of napalm?
Or the bomb that destroys a culture & tradition.
Or the napalm that creates a cancer,
that spread & kills a culture & tradition.
See I walked & run thru the war zones.
My father fought in the war,
while my peasant mother took care of home.
Communism sweeping thru, my father came back,
and fled a land we call home.
My little feet ran thru the jungles.
My head duck down crossing the Mekong River.
Bullets racing by while we huddled.
I laugh & played in the refugee camp,
while my mother & father struggled.
In 83 we touched the land of opportunities.
But WIC & Welfare became our realities.
Now a new war is on.
I watched my mother & father missing a land
called home.
And I watched them adapting a new culture.
In my eyes I see my traditions almost gone.
Other refugee kids also losing old ways.
So I see a traditional death today.
But I see a extinction in the future.
With no shoes I still walk.
My language I still talk.
Home is in my heart.
So take off your shoes, and
try to walk a mile barefooted.
But you couldn't
Because your feed is use to comfort,
while mines is use to hardship.

Thanks for writing! I finished the transcription for your post.
Hi Seng! It's Kat. As long as you remember the tradition and language will survive. Keep on telling your story!

"Three things cannot be long hidden: the sun, the moon and the truth."
/Buddha
:)