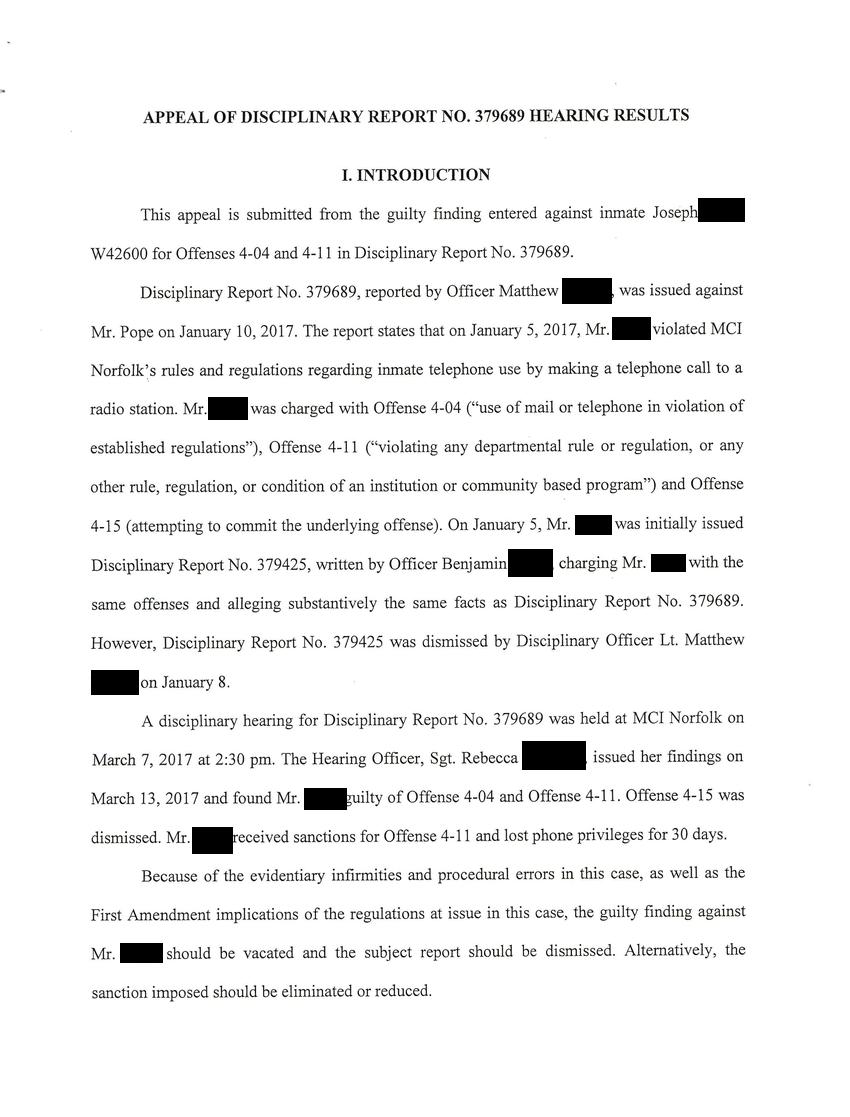 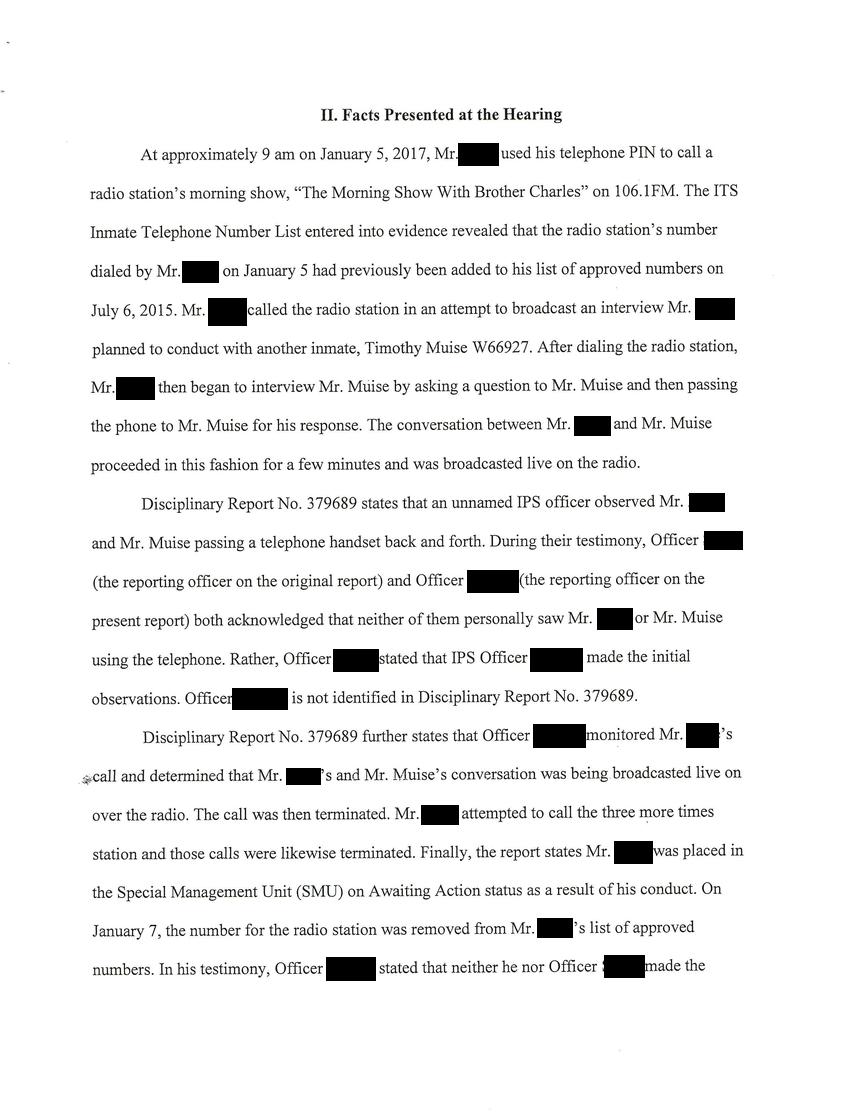 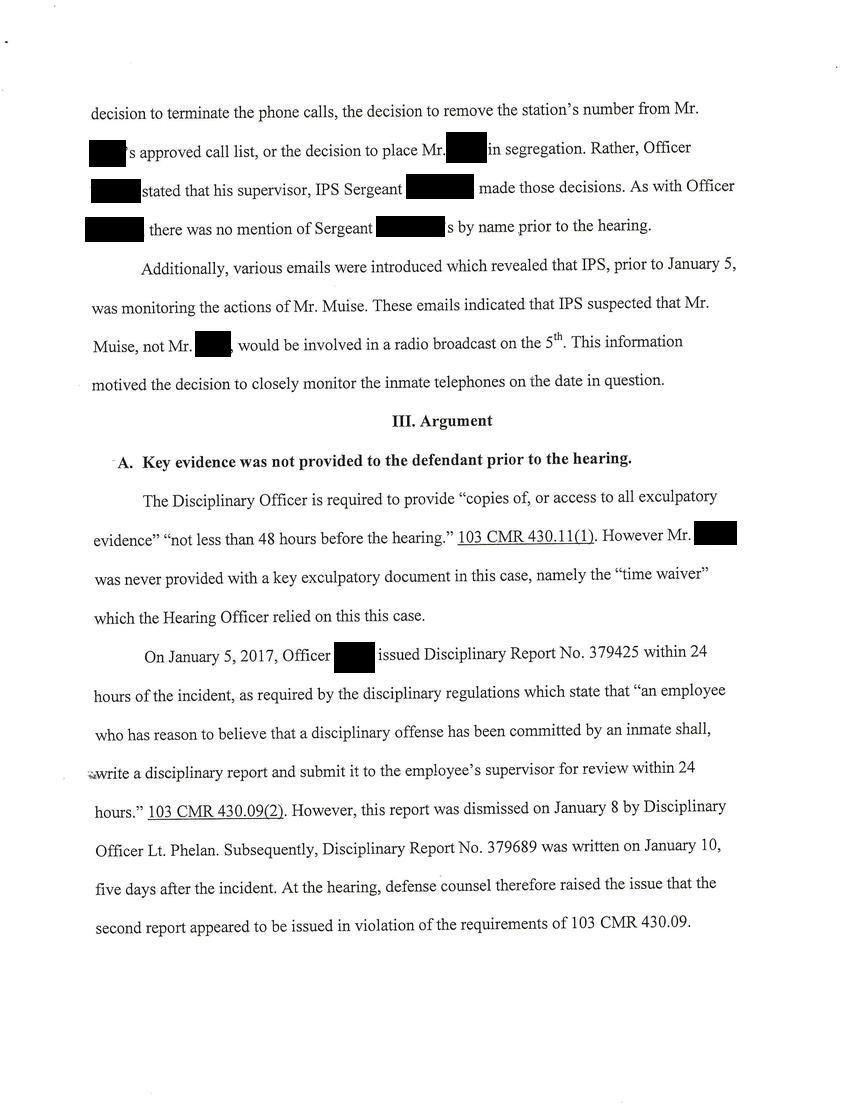 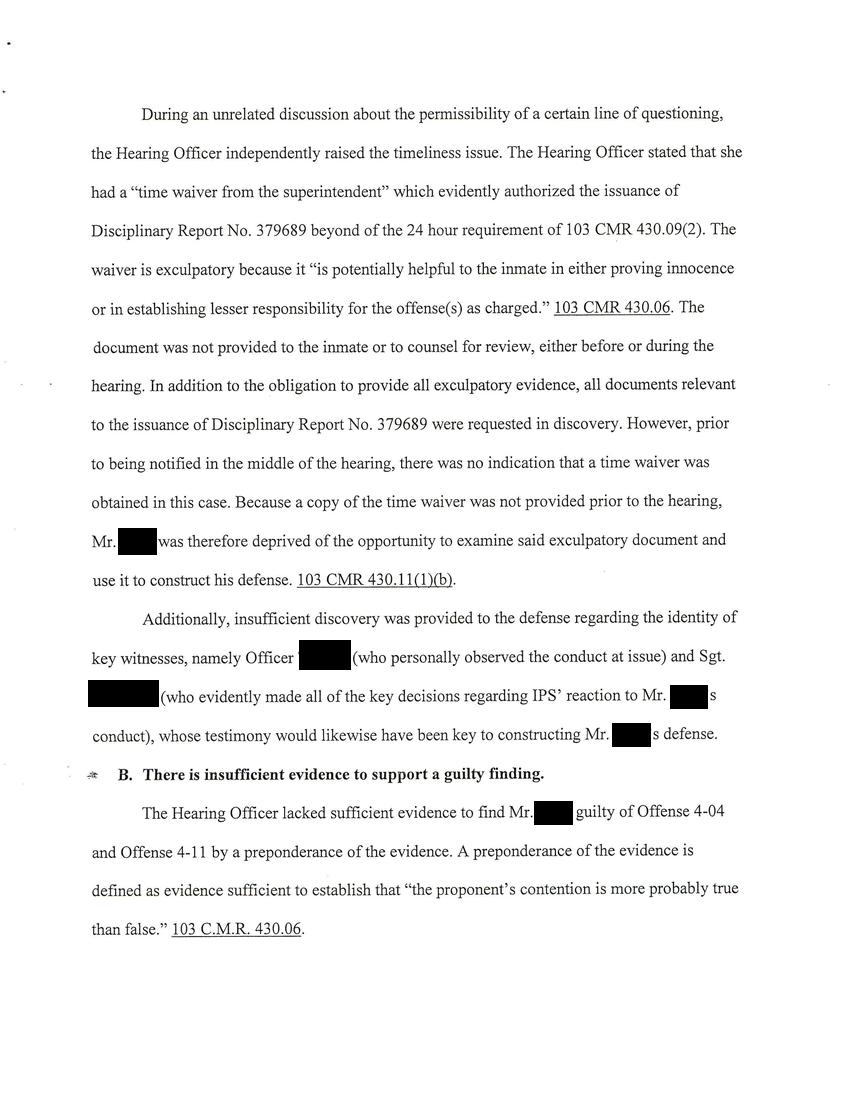 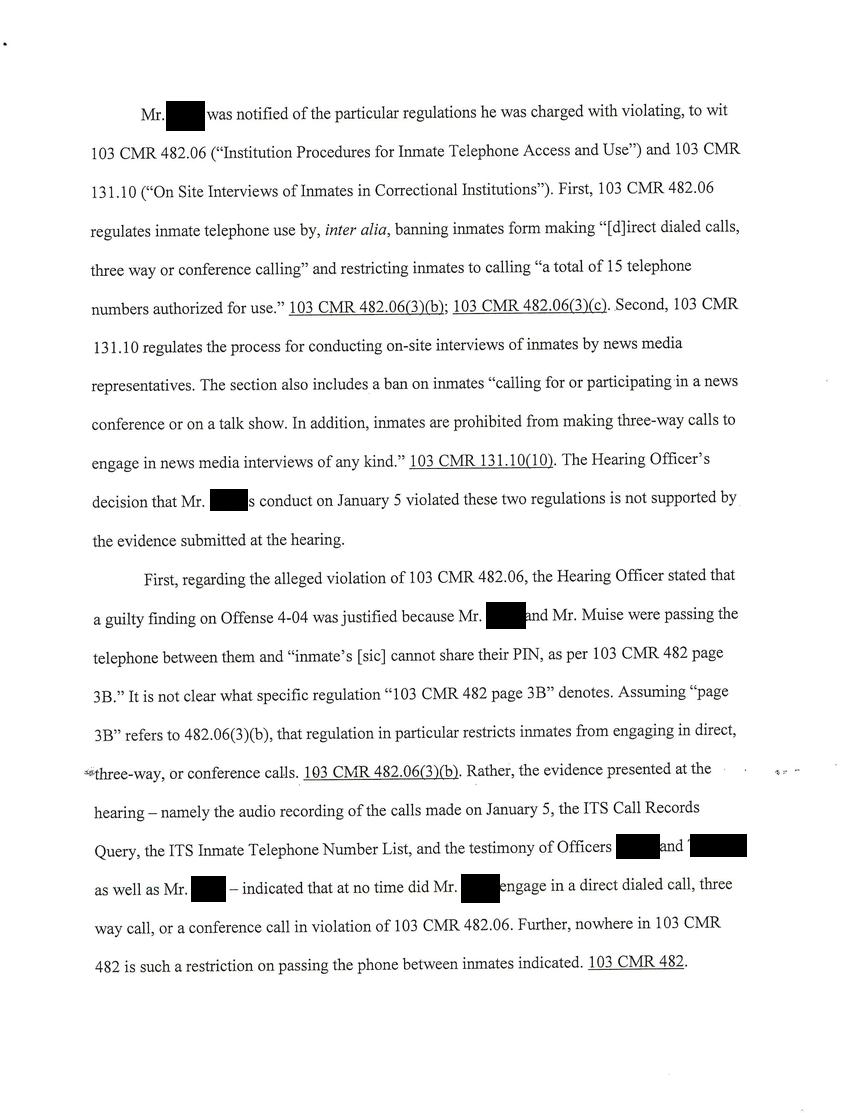 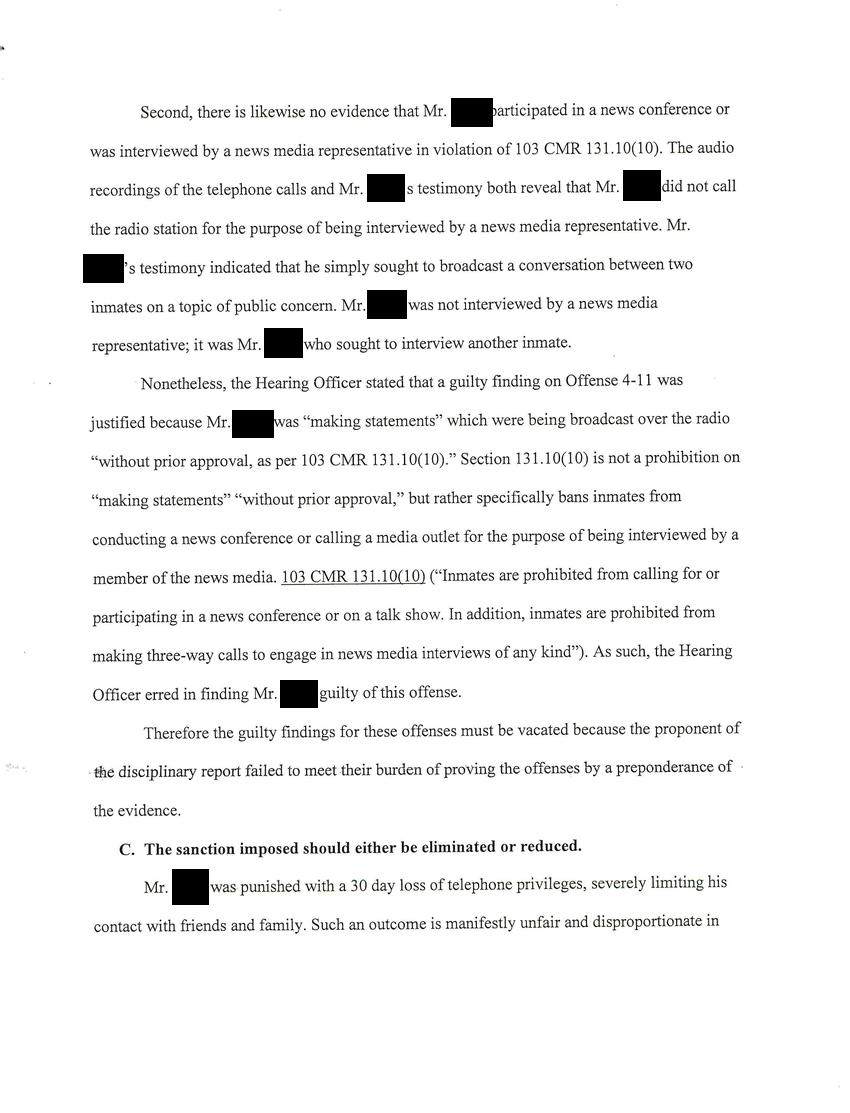 II. Facts Presented at the Hearing

At approximately 9 am on January 5, 2017, Mr. - used his telephone PIN to call a radio station's morning show, "The Morning Show With Brother Charles" on 106.1FM. The ITS Inmate Telephone Number List entered into evidence revealed that the radio station's number dialled by Mr. - on January 5 had previously been added to his list of approved numbers on July 6, 2015. Mr. - called the radio station in an attempt to broadcast an interview Mr. - planned to conduct with another inmate, Timothy Muise W66927. After dialling the radio station, Mr. - then began to interview Mr. Muise by asking a question to Mr. Muise and then passing the phone to Mr. Muise for his response. The conversation between Mr. - and Mr. Muise proceeded in this fashion for a few minutes and was broadcasted live on the radio.
Disciplinary Report No. 379689 states that an unnamed IPS officer observed Mr. - and Mr. Muise passing a telephone handset back and forth. During their testimony, Officer - (the reporting officer on the original report) and Officer - (the reporting officer on the present report) both acknowledged that neither of them personally saw Mr. - or Mr. Muise using the telephone. Rather, Officer - stated that IPS Officer - made the initial observations. Officer - is not identified in Disciplinary Report No. 379689.
Disciplinary Report No. 379689 further states that Officer - monitored Mr. -'s call and determined that Mr.-'s and Mr Muise's conversation was being broadcasted live on over the radio. The call was then terminated. Mr. - attempted to call the three more times station and those calls were likewise terminated. Finally, the report states Mr. - was placed in the Special Management Unit (SMU) on Awaiting Action status as a result of his conduct. On January 7, the number for the radio station was removed from Mr. -'s list of approved numbers. In his testimony, Officer - stated that neither he nor Officer - made the decision to terminate the phone calls, the decision to remove the station's number from Mr. -'s approved call list, or the decision to place Mr. - in segregation. Rather, Officer - stated that his supervisor, IPS Sergeant - made those decisions. As with Officer - there was no mention of Sergeant -'s by name prior to the hearing.
Additionally, various emails were introduced which revealed that IPS, prior to January 5, was monitoring the actions of Mr. Muise. These emails indicated that IPS suspected that Mr. Muise, not Mr. -, would be involved in a radio broadcast on the 5th. This information motivated the decision to closely monitor the inmate telephones on the date in question.

A. Key evidence was not provided to the defendant prior to the hearing.

The Disciplinary Officer is required to proved "copies of, or access to all exculpatory evidence" "not less than 48 hours before the hearing." 103 CMR 430.11(1). However Mr. - was never provided with a key exculpatory document in this case, namely the "time waiver" which the Hearing Officer relied on this case.
On January 5, 2017, Officer - issued Disciplinary Report No. 379425 within 24 hours of the incident, as required by the disciplinary regulations which state that "an employee who has reason to believe that a disciplinary offense has been committed by an inmate shall, write a disciplinary report and submit it to the employee's supervisor for review within 24 hours." 103 CMR 430.09(2). However, this report was dismissed on January 8 by Disciplinary Officer Lt. Phelan. Subsequently, Disciplinary Report No. 379689 was written on January 10, five days after the incident. At the hearing, defense counsel therefore raised the issue that the second report appeared to be issued in violation of the requirements of 103 CMR 430.09.

During an unrelated discussion about the permissibility of a certain line of questioning, the Hearing Officer independently raised the timeliness issue. The Hearing Officer stated that she had a "time waiver from the superintendent" which evidently authorized the issuance of Disciplinary Report No. 379689 beyond of the 24 hour requirement of 103 CMR 430.09(2). The waiver is exculpatory because it "is potentially helpful to the inmate in either proving innocence or in establishing lesser responsibility for the offense(s) as charged." 103 CMR 430.06. The document was not provided to the inmate or to counsel for review, either before or during the hearing. In addition to the obligation to provide all exculpatory evidence, all documents relevant to the issuance of Disciplinary Report No. 379689 were requested in discovery. However, prior to being notified in the middle of the hearing, there was no indication that a time waiver was obtained in this case. Because a copy of the time waiver was not provided prior to the hearing, Mr. - was therefore deprived of the opportunity to examine said exculpatory document and use it to construct his defense. 103 CMR 430.11(1)(b).
Additionally, insufficient discovery was provided to the defense regarding the identity of key witnesses, namely Officer - (who personally observed the conduct at issue) and Sgt. - (who evidently made all of the key decisions regarding IPS' reaction to Mr. -'s conduct), whose testimony would likewise have been key to constructing Mr. -'s defense.

B. There is insufficient evidence to support a guilty finding.

Mr. - was notified of the particular regulations he was charged with violating, to wit 103 CMR 482.06 ("Institution Procedures for Inmate Telephone Access and Use") and 103 CMR 131.10 ("On Site Interviews of Inmates in Correctional Institutions"). First, 103 CMR 482.06 regulates inmate telephone use by, inter alia, banning inmates form making "[d]irect dialled calls, three way or conference calling" and restricting inmates to calling "a total of 15 telephone numbers authorized for use." 103 CMR 482.06(3)(b); 103 CMR 482.06(3)(c). Second, 103 CMR 131.10 regulates the process for conducting on-site interviews of inmates by news media representatives. The section also includes a ban on inmates "calling for or participating in a news conference or on a talk show. In addition, inmates are prohibited from making three-way calls to engage in news media interviews of any kind." 103 CMR 131.10(10). The Hearing Officer's decision that Mr. -'s conduct on January 5 violated these two regulations is not supported by the evidence submitted at the hearing.
First, regarding the alleged violation of 103 CMR 482.06, the Hearing Officer stated that a guilty finding on Offense 4-04 was justified because Mr. - and Mr. Muise were passing the telephone between them and "inmate's [sic] cannot share their PIN, as per 103 CMR 482 page 3B." It is not clear what specific regulation "103 CMR 482 page 3B" denotes. Assuming "page 3B" refers to 482.06(3)(b), that regulation in particular restricts inmates from engaging in direct, three-way, or conference calls. 103 CMR 482.06(3)(b). Rather, the evidence presented at the hearing - namely the audio recording of the calls made on January 5, the ITS Call Records Query, the ITS Inmate Telephone Number List, and the testimony of Officers - and - as well as Mr. - - indicated that at no time did Mr. - engage in a direct dialled call, three way call, or a conference call in violation of 103 CMR 482.06. Further, nowhere in 103 CMR 482 is such a restriction on passing the phone between inmates indicated. 103 CMR 482.

Second, there is likewise no evidence that Mr. - participated in a news conference or was interviewed by a news media representative in violation of 103 CMR 131.10(10). The audio recordings of the telephone calls and Mr. -'s testimony both reveal that Mr. - did not call the radio station for the purpose of being interviewed by a news media representative. Mr. -'s testimony indicated that he simply sought to broadcast a conversation between two inmates on a topic of public concern. Mr. - was not interviewed by a news media representative; it was Mr. - who sought to interview another inmate.
Nonetheless, the Hearing Officer stated that a guilty finding on Offense 4-11 was justified because Mr. - was "making statements" which were being broadcast over the radio "without prior approval, as per 103 CMR 131.10(10)." Section 131.10(10) is not a prohibition on "making statements" "without prior approval," but rather specifically bans inmate from conducting a news conference or calling a media outlet for the purpose of being interviewed by a member of the news media. 103 CMR 131.10(10)("Inmates are prohibited from calling for or participating in a news conference or on a talk show. In addition, inmates are prohibited from making three-way calls to engage in news media interviews of any kind"). As such, the Hearing Officer erred in finding Mr. - guilty of this offense.
Therefore the guilty findings for these offenses must be vacated because the proponent of the disciplinary report failed to meet their burden of proving the offenses by a preponderance of the evidence.

C. The sanction imposed should either be eliminated or reduced.

Mr. - was punished with a 30 day loss of telephone privileges, severely limiting his contact with friends and family. Such an outcome is manifestly unfair and disproportionate in light of the First Amendment implications presented by this case. Even if the subject report is not dismissed, this sanction should be eliminated or reduced.
As indicated by Mr. - in his testimony, as well as in the opening and closing statements offered by counsel on his behalf, Mr. -'s purpose for conducting and broadcasting his interviews with other inmates was to help give inmates a voice, to raise public awareness about the realities of life in prison, and to advocate for criminal justice reform. Sanctioning an inmate for engaging in peaceful, non-disruptive conduct which was aimed at both boosting inmate moral and raising public awareness about matters of public concern raises serious First Amendment concerns. The constitutionality of the regulations on inmate contact with the media was not substantively argued at the hearing, as it is beyond the scope of a disciplinary proceeding, but the potential First Amendment implications were raised and therefore preserved for appeal.

For the foregoing reasons the guilty findings for Offense 4-04 and 4-11 should be vacated and the subject Disciplinary Report No. 379689 should be dismissed. In the alternative, the sanctions imposed should be eliminated or reduced.