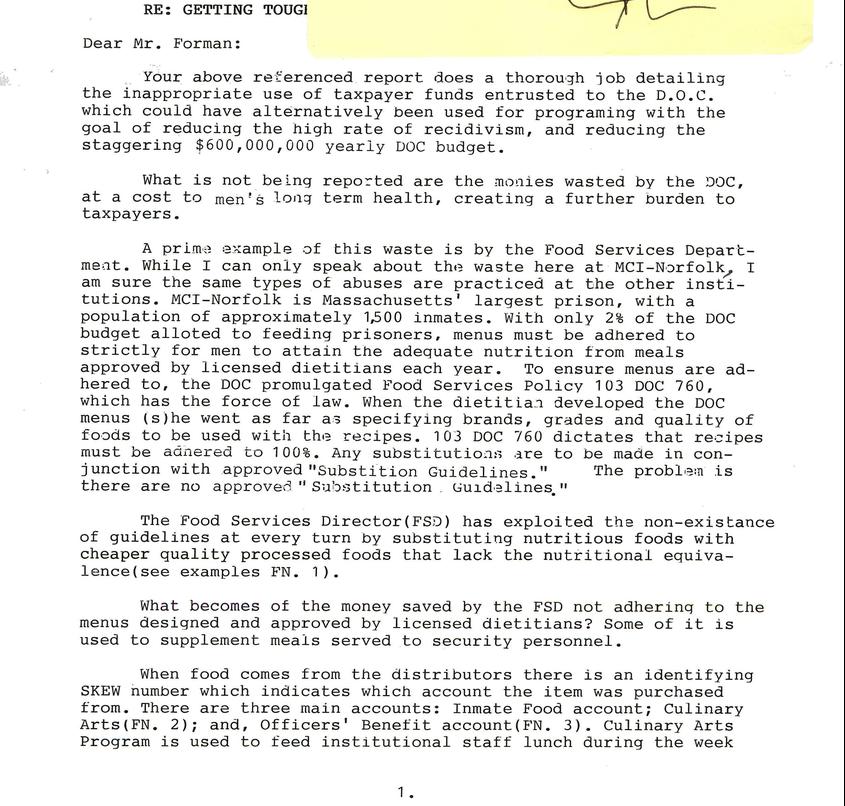 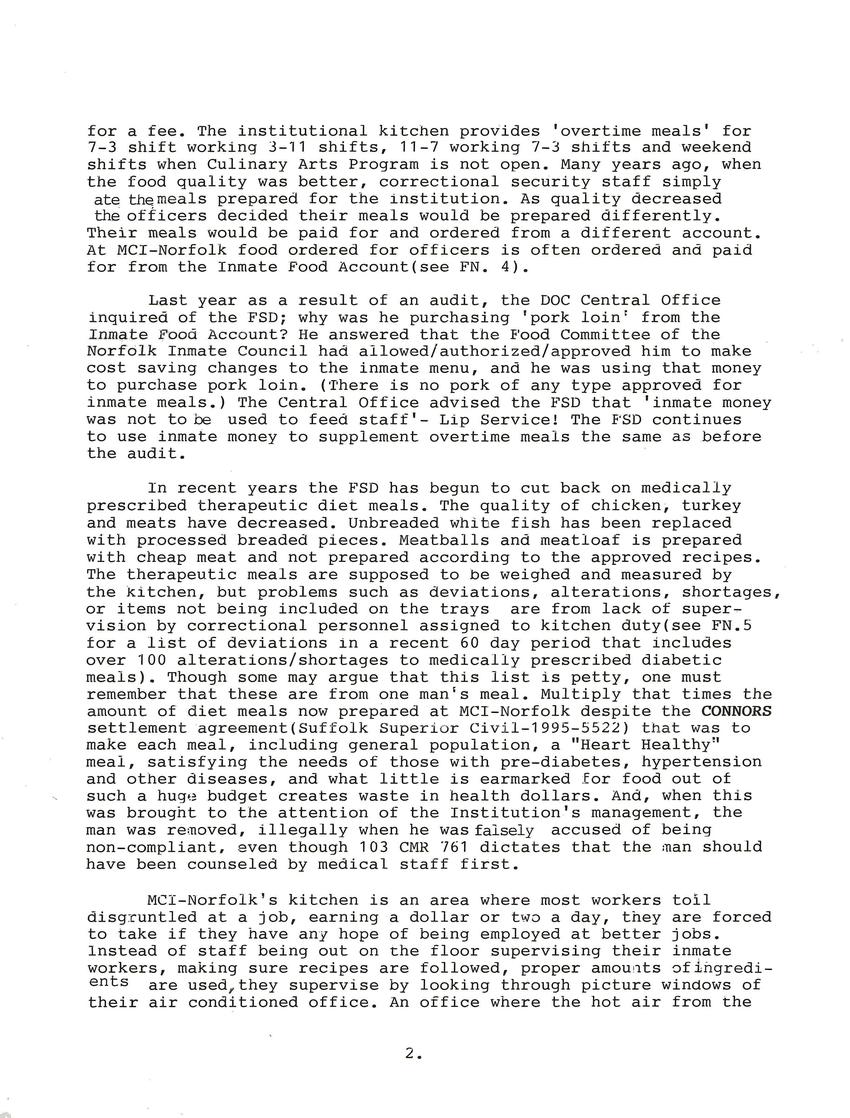 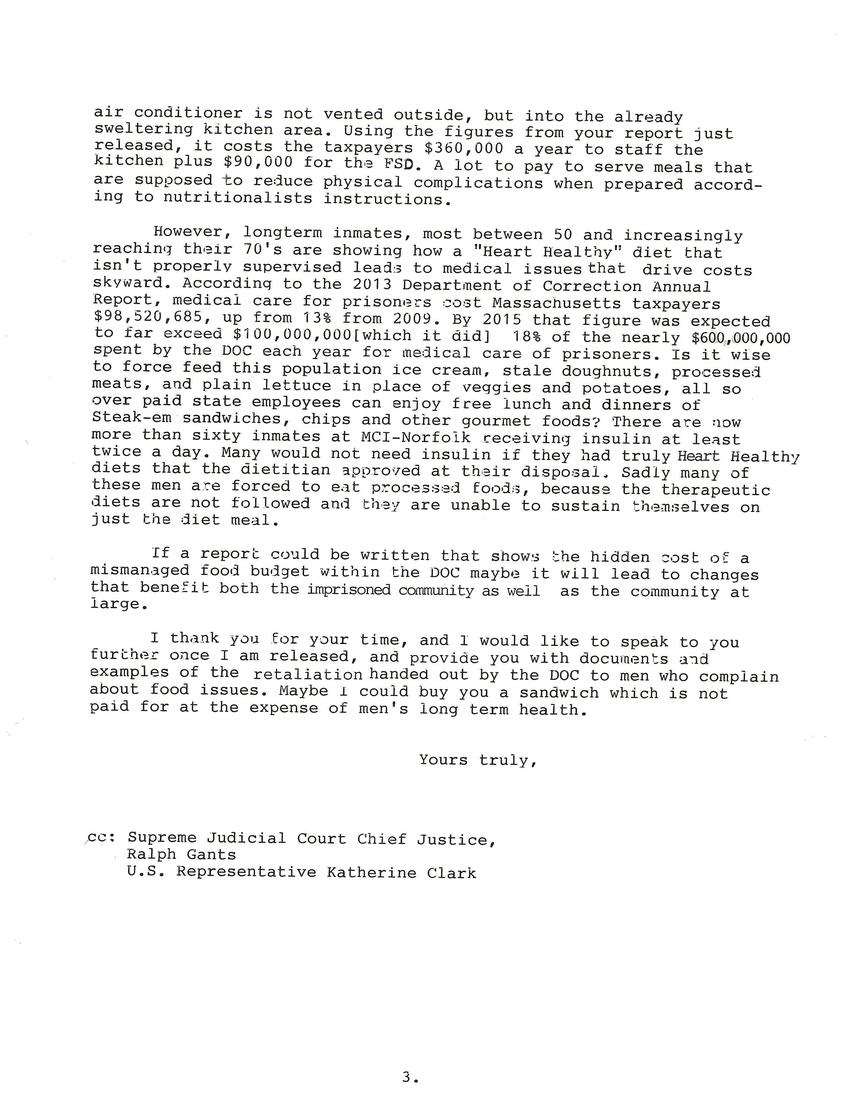 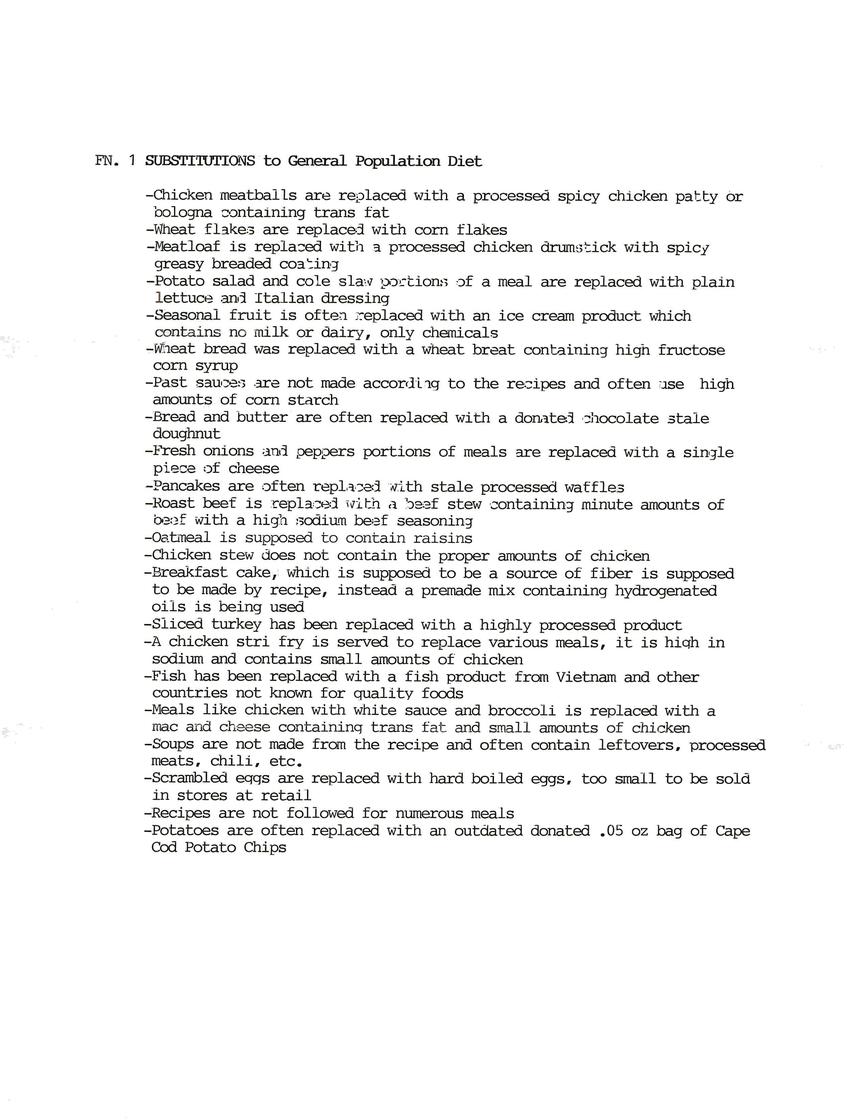 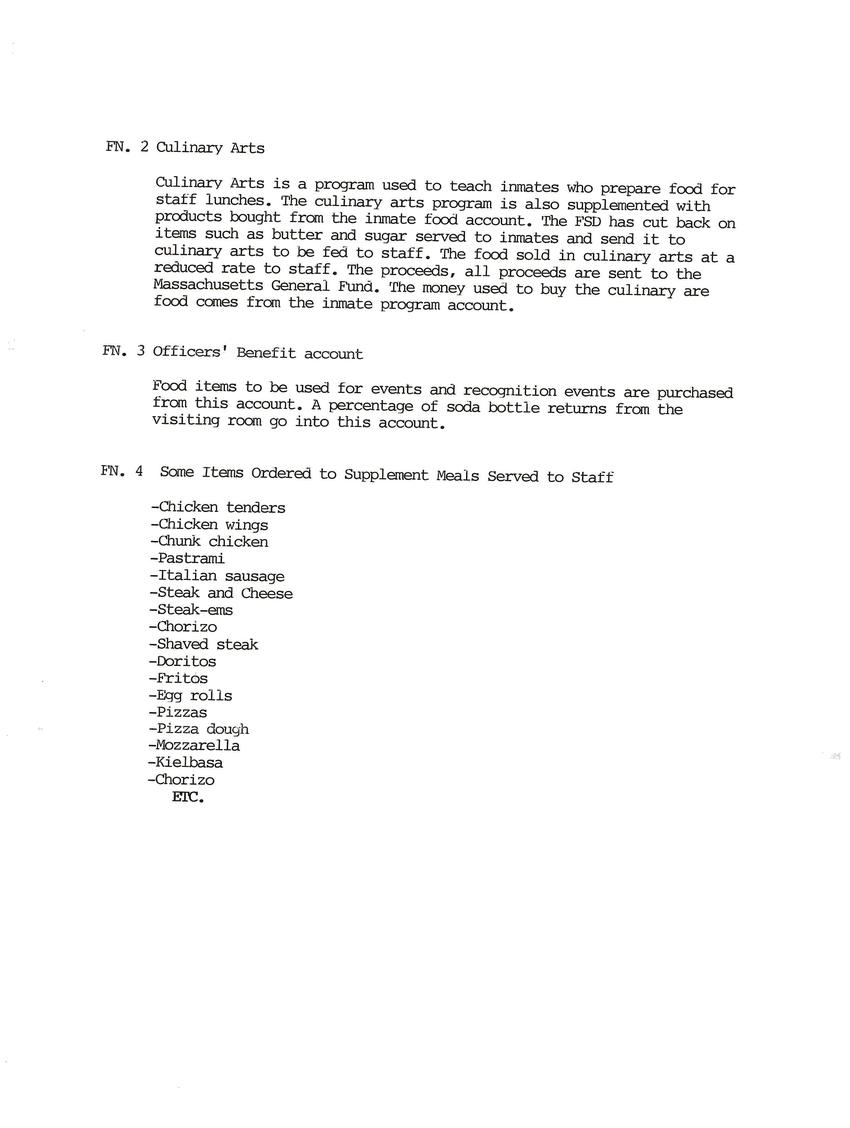 Your above referenced report does a thorough job detailing the inappropriate use of taxpayer funds entrusted to the D.O.C. which could have alternatively been used for programing with the goal of reducing the high rate of recidivism, and reducing the staggering $600,000,000 yearly DOC budget.

What is not being reported are the monies wasted by the DOC, at a cost to men's long term health, creating a further burden to taxpayers.

A prime example of this waste is by the Food Services Department. While I can only speak about the waste here at MCI-Norfolk, I am sure the same types of abuses are practiced at the other institutions. MCI-Norfolk is Massachusetts' largest prison, with a population of approximately 1,500 inmates. With only 2% of the DOC budget allotted to feeding prisoners, menus must be adhered to strictly for men to attain the adequate nutrition from meals approved by licensed dietitians each year. To ensure menus are adhered to, the DOC promulgated Food Services Policy 103 DOC 760, which has the force of law. When the dietitian developed the DOC menus (s)he went as far as specifying brands, grades and quality of foods to be used with the recipes. 103 DOC 760 dictates that recipes must be adhered to 100%. Any substitutions are to be made in conjunction with approved "Substition Guidelines." The problem is there are no approved "Substitution Guidelines."

When food comes from the distributors there is an identifying SKEW number which indicates which account the item was purchased from. There are three main accounts: Inmate Food account; Culinary Arts (FN. 2); and, Officers Benefit account (FN> 3). Culinary Arts Program is used to feed institutional staff lunch during the week for a fee. The institutional Kitchen provides "overtime meals' for 7-3 shift working 3-11 shifts, 11-7 working shifts and weekend shifts when Culinary Arts Program is not open. Many years ago, when the food quality was better, correctional security staff simply ate the meals prepared for the institution. As quality decreased the officers decided their meals would be prepared differently. Their meals would be paid for and ordered from a different account. At MIC-Norfolk food prepared for officers is often ordered and payed for from the Inmate Food Account( see FN. 4 ).

Last year as a result of an audit, the DOC Central Office inquired of the FSD; why was he purchasing 'pork loin' from the Inmate Food Account? He answered that the Food Committee of the Norfolk Inmate Council had allowed/ authorized/ approved him to make cost saving changes to the inmate menu, and he was using that money to purchase pork loin. ( There is no pork of any type approved for inmate meals.) The Central Office advised the FSD that ' inmate money was not to be used to feed staff Lip Service! The FSD continues to use inmate money to supplement overtime meals the same as before the audit.

In recent years the FSD had begun to cut back on medically prescribed therapeutic diet meals. The quality of chicken, turkey and meats have decreased. Un-breaded white fish has been replaced with processed breaded pieces. Meatballs and meatloaf is prepared with cheap meat and not prepared according to the approved recipes. The therapeutic meals are supposed to be weighed and measured by the kitchen, but problems such as deviations, alternation, shortages or items not being included on the trays are from lack of supervision by correctional personnel assigned to kitchen duty (see FN. 5) for a list of deviations in the recent 60 day period that included over 100 alterations/ Shortages to medically prescribed diabetic meals). Though some may argue that this list is petty, one must remember that these are from one man's meal. Multiply that times amount of diet meals now prepared at MIC- Norfolk despite the CONNORS settlement agreement(Suffolk Superior Civil- 1995-5522)
The Food Services Director(FSD) has exploited the non-existence of guidelines at every turn by substituting nutritious foods with cheaper quality processed foods that lack the nutritional equivalence(see examples FN. 1).

When food comes from the distributors there is an identifying SKEW number which indicates which account the item was purchased from. There are three main accounts: Inmate Food account; Culinary Arts(FN. 2); and, Officers' Benefit account(FN. 3). Culinary Arts Program is used to feed institutional staff lunch during the week for a fee. The institutional kitchen provides 'overtime meals' for 7-3 shift working 3-11 shifts, 11-7 working 7-3 shifts and weekend shifts when Culinary Arts Program is not open. Many years ago, when the food quality was better, correctional security staff simply ate the meals prepared for the institution. As quality decreased the officers decided their meals would be prepared differently. Their meals would be paid for and ordered from a different account. At MCI-Norfolk food ordered for officers is often ordered and paid for from the Inmate Food Account(see FN. 4). that was to make each meal, including general population, a " Heart Healthy" meal, satisfying the needs of those with pre-diabetes, hypertension and other diseases, and what little is earmarked for food out of such huge budget creates waste in health dollars. And when this was brought to the attention of the Institution's management, the man was removed, illegally when he was falsely accused of being non-compliant, even though 103 CMR 761 dictates that the man should have been counseled by medical staff first.

MIC-Norfolk's kitchen is an area where most workers toil disgruntled at a job, earning a dollar or two a day, they are forced to take if they have any hope of being employed at better jobs. Instead of staff being out on the floor supervising their inmate workers, making sure recipes are followed, proper amounts of ingredients are used, they supervised by looking through picture windows of their air conditioned office. An office where the hot air from the air conditioner is not vented outside, but into the already sweltering kitchen area. Using the figures from your report just released, it costs the taxpayer $ 360,000 a year to staff the kitchen pluss $ 90,000 for the FSD. A lot to pay to serve means that are supposed to reduce physical complications when prepared according to nutritionist instructions.

However, long-tern inmates, most between 50 and increasingly reaching their 70's are showing how a " Heart Healthy" diet that isn't properly supervised leads to medical issues that drive costs skyward. According to the 2013 Department of Correction Annual Report, medical care for prisoners cost Massachusetts taxpayers $98,520,685, up from 13% from 2009. By 2015 that figure was expected to far exceed $100,000,000( which it did) 18% for the nearly 600,000,000 spent by the DOC each year for medical care of prisoners. It is wise force feed this population ice cream, stale doughnuts, processed meats, and plain lettuce in place of veggies and potatoes, all so over paid state employees can enjoy free lunch and dinners of steak-em's sandwiches, chips and other gourmet foods? There are now more than sixty inmates at MIC-Norfolk receiving insulin at least twice a day. Many would not need insulin if they had truly Heart Healthy diets that the dietitian approved at their disposal. Sadly many of these men are forced to eat processed foods, because the therapeutic diets are not followed and they are unable to sustain themselves on just the diet meal.

If a report could be written the shows the hidden cost of a mismanaged food budget within the DOC maybe it will lead to changes that benefit both the imprisoned community as well as the community at large.

I thank you for your time, and I would like to speak to you further once I am released, and provided you with documents and example's of the retaliation handed out by the DOC to me who complain about food issues. Maybe I could buy you a sandwich which is not paid for at the expense of men's long term health.

Culinary Arts is a program used to teach inmates who prepare food for staff lunches. The culinary arts program is also supplemented with products bought from inmate food account. The FSD had cut back on items such as butter and sugar served to inmates and send it to culinary arts to be fed to staff. The food sold in culinary arts has reduced rate to staff. The proceeds, all processed are sent to the Massachuetts General Fund. The money used to buy the culinary are food comes from the inmate program account.

Food items used to be used for events and recognition events are purchased from this account. A percentage of soda bottle returns from the visiting room to go into this account.

FN. 4 Some items Ordered to Supplement Meals Served to Staff

This guy Muise has his shit together!
Hope he keeps writing.

Former Guard
MUISE IS RIGHT!
The system is broken!!!
Thanks for writing! I finished the transcription for your post.

Thank you for informing us about what's going on and your concern about paying attention to how money is spent and could be saved. Wish this message gets out to the right person.
Come on Timmy.........first we get 'Phantom' and then it's 'theemancipator'. I know you've been down for a while but you need a handle that isn't so transparent.

I know.....how about Timothy J Muise!