Close The Quad! / See No Evil, Hear No Evil, Speak No Evil 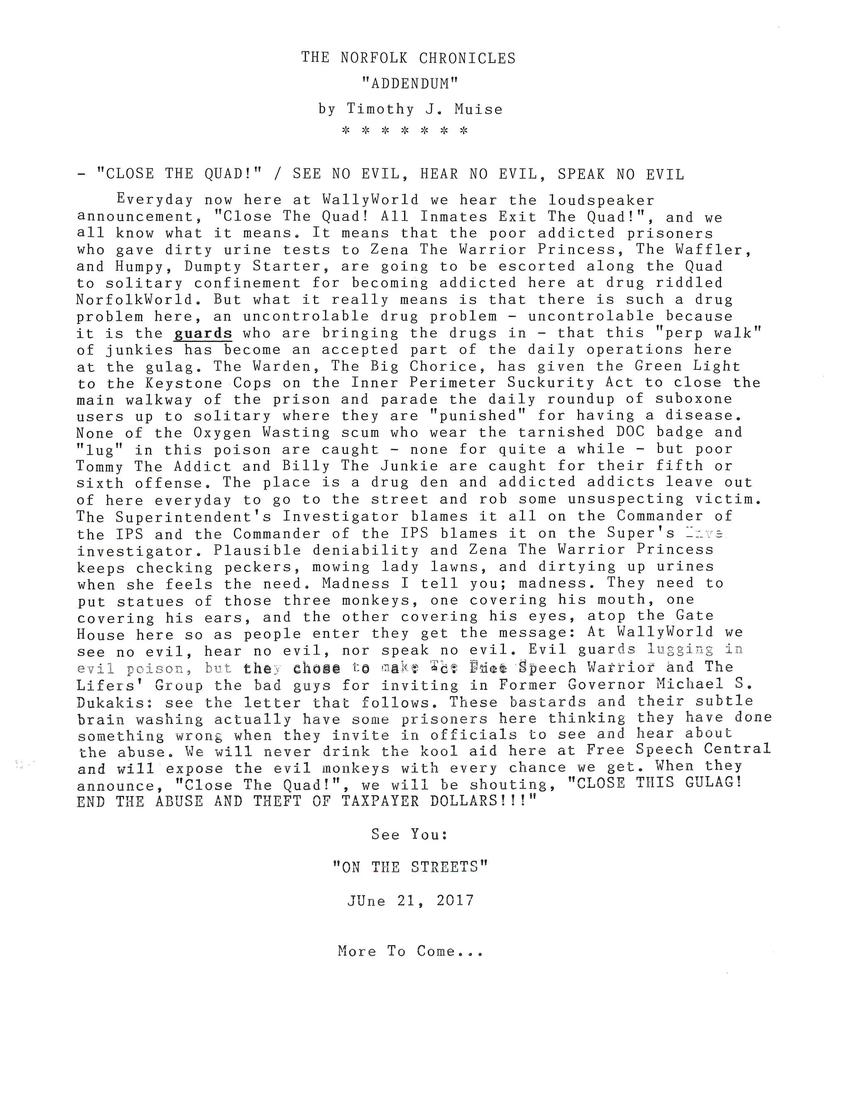 everyday now here at WallyWorld we here the loundspeaker announcement, " Close The Quad!", and we all know what it means. It means that the poor addicted prisoners who gave dirty urine test to Zena The Warrior Princess, The Waffler, and Humpty, Dumpty Starter, are going to be escorting along the Quad to solitary confinement for becoming addicted here at drug riddled NorfolkWorld. But what it really means is that there is such a drug problem here, an uncontrollable drug problem- uncontrollable because is is the guards who are bringing the drugs in- that this " prep walk" of junkies has become an accepted part of the daily operations here at the gulag. The Warden, The Big Chronicle, had given the Green Light ti the Keystone Cops on the Inner Perimeter Suckurity Act to close the main walkway of the prison and parade the daily roundup of suboxone users up to solitary where they are " punished" for having a disease. None of the Oxgen Wasting scum who wear the tarnished DOC badge and " lung"in this poison are caught- none for quite a while- but poor Tommy The Addict and Billu The junkie are caught for their fifth or sixth offence. The place is a drug den and addicted addicts leave out of here everyday to go to the stree and rob some unsuspecting victim. The superintendent's Investigator blames if al on the Commander of the IPS and the Commander of the IPS blames it on the Super's investigator. Plausible deniability and Zena The Warrior Princess keeps checking peckers, moving lady lawns, and dirtying up urines when she feels the need. Madness I tell you; madness. They need toput statues of thouse three monkeys, one covering his mouth, one covering his ears, and the other covering his eyes; atop the Gate House here so as people enter they get the message: At WallyWorld we see no evil, hear no evil, nor speak no evil. Evil guards lugging in evil posion, but the chose to make The Free Speech Warrior and the lifers Group the bad guys for inviting in Former Governor Micheal S. Dukakis: see the letter that follows. These bastards and their subtle brain washing actually have some prisoners here thinking they have sont something wrong when the incite in officials to see and hear about the abuse. We will never drink the Kool aid here at Free Speech Central and will expose the evil monkeys with every chance we get. When they announce, " Close the Quad!", we will be shouting, " Close THIS GULAG! END THE ABUSE AND THEFT OF TAXPAYER DOLLERS!!!"

Thank you Tim for your insight and wit. Don't "feel" the haters!
The Warden and his henchmen/henchwomen need to be sent to the unemployment line. Shame on them all!