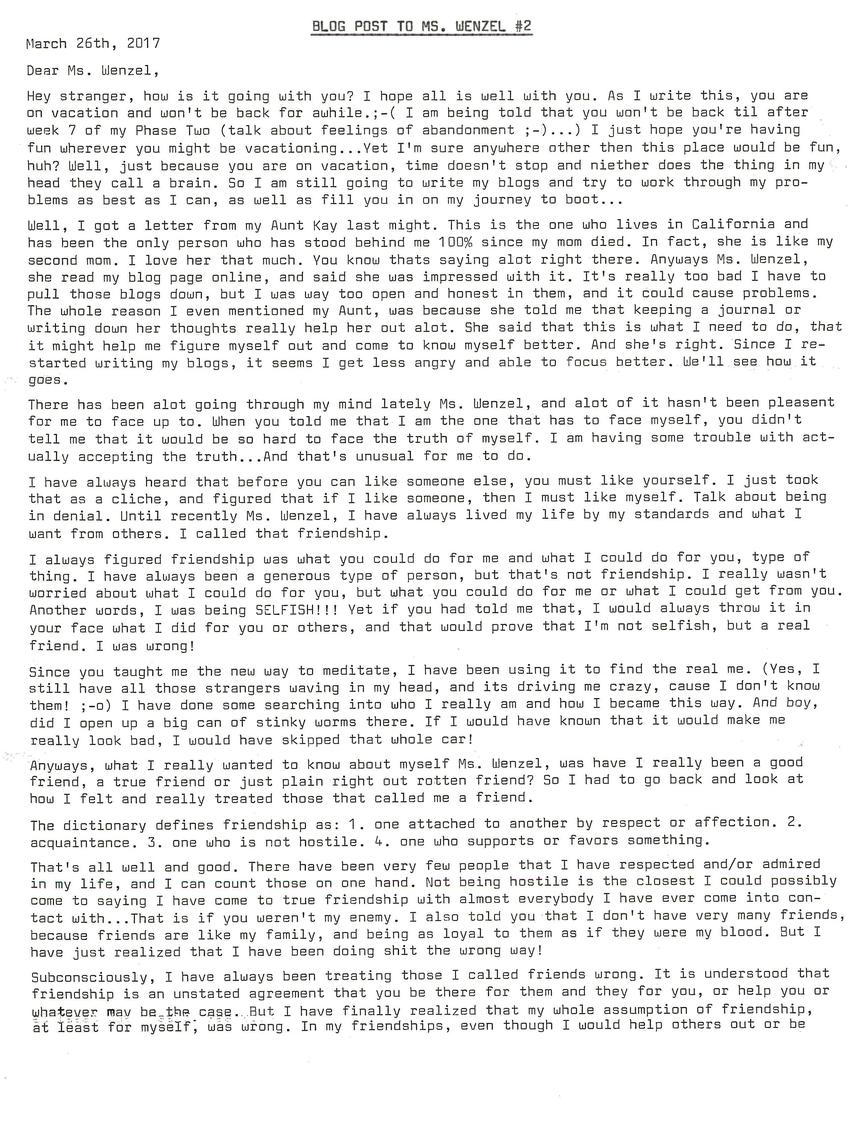 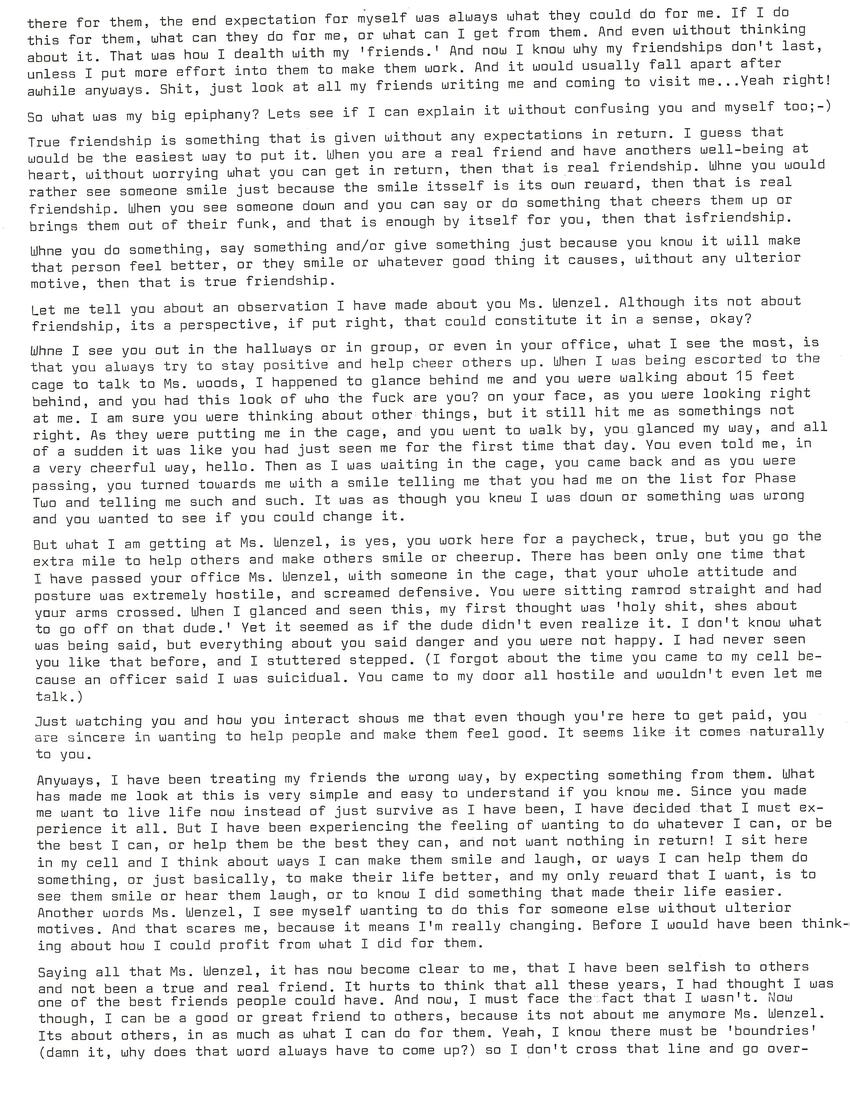 Hey stranger, how is it going with you? I hope all is well with you. As I write this, you are on vacation and won't be back for awhile.;-( I am being told that you won't be back til after week 7 of my Phase Two (talk about feelings of abandonment ;-)...) I just hope you're having fun wherever you might be vacationing...Yet I'm sure anywhere other then this place would be fun, huh? Well, just because you are on vacation, time doesn't stop and neither does the thing in my head they call a brain. So I am still going to write my blogs and try to work through my problems as best as I can, as well as fill you in on my journey to boot...

Well, I got a letter from my Aunt Kay last night. This is the one who lives in California and has been the only person who has stood behind me 100% since my mom died. In fact, she is like my second mom. I love her that much. You know that's saying a lot right there. Anyways Ms. Wenzel, she read my blog page online, and said she was impressed with it. It's really too bad I have to pull those blogs down, but I was way too open and honest in them, and it could cause problems. The whole reason I even mentioned my Aunt, was because she told me that keeping a journal or writing down her thoughts really help her out a lot. She said that this is what I need to do, that it might help me figure myself out and come to know myself better. And she's right. Since I restarted writing my blogs, it seems I get less angry and able to focus better. We'll see how it goes.

There has been a lot going through my mind lately Ms. Wenzel, and a lot of it hasn't been pleasant for me to face up to. When you told me that I am the one that has to face myself, you didn't tell me that it would be so hard to face the truth of myself. I am having some trouble with actually accepting the truth...And that's unusual for me to do.

I have always heard that before you can like someone else, you must like yourself. I just took that as a cliche, and figured that if I like someone, then I must like myself. Talk about being in denial. Until recently Ms. Wenzel, I have always lived my life by my standards and what I want from others. I called that friendship.

Since you taught me the new way to meditate, I have been using it to find the real me. (Yes, I still have all those strangers waving in my head, and it's driving me crazy, cause I don't know them! ;-o) I have done some searching into who I really am and how I became this way. And boy, did I open up a big can of stinky worms there. If I would have known that it would make me really look bad, I would have skipped that whole car!

Anyways, what I really wanted to know about myself Ms. Wenzel, was have I really been a good friend, a true friend or just plain right out rotten friend? So I had to go back and look at how I felt and really treated those that called me a friend.

The dictionary defines friendship as: 1. one attached to another by respect or affection. 2. acquaintance. 3, one who is not hostile. 4. one who supports or favors something.

That's all well and good. There have been very few people that I have respected and/or admired in my life, and I can count those on one hand. Not being hostile is the closest I could possibly come to saying I have come to true friendship with almost everybody I have ever come into con-tact with...That is if you weren't my enemy. I also told you that I don't have very many friends, because friends are like my family, and being as loyal to them as if they were my blood. But I have just realized that I have been doing shit the wrong way!

Subconsciously, I have always been treating those I called friends wrong. It is understood that friendship is an unstated agreement that you be there for them and they for you, or help you or whatever may be_the case. But I have finally realized that my whole assumption of friendship, at least for myself, was wrong. In my friendships, even though I would help others out or be

there for them, the end expectation for myself was always what they could do for me. If I do this for then, what can they do for me, or what can I get from them. And even without thinking about it. That was how I dealth with my 'friends.' And now I know why my friendships don't last, unless I put more effort into them to make them work. And it would usually fall apart after awhile anyways. Shit, just look at all my friends writing me and coming to visit me...Yeah right!

So what was my big epiphany? Let's see if I can explain it without confusing you and myself too;-)

When you do something, say something and/or give something just because you know it will make that person feel better, or they smile or whatever good thing it causes, without any ulterior motive, then that is true friendship.

Let me tell you about an observation I have made about you Ms. Wenzel. Although it's not about friendship, it's a perspective, if put right, that could constitute it in a sense, okay?

When I see you out in the hallways or in group, or even in your office, what I see the most, is that you always try to stay positive and help cheer others up. When I was being escorted to the cage to talk to Ms. Woods, I happened to glance behind me and you were walking about 15 feet behind, and you had this look of who the fuck are you? on your face, as you were looking right at me. I am sure you were thinking about other things, but it still hit me as something's not right. As they were putting me in the cage, and you went to walk by, you glanced my way, and all of a sudden it was like you had just seen me for the first time that day. You even told me, in a very cheerful way, hello. Then as I was waiting in the cage, you came back and as you were passing, you turned towards me with a smile telling me that you had me on the list for Phase Two and telling me such and such. It was as though you knew I was down or something was wrong and you wanted to see if you could change it.

But what I am getting at, Ms. Wenzel, is yes, you work here for a paycheck, true, but you go the extra mile to help others and make others smile or cheer up. There has been only one time that I have passed your office Ms. Wenzel, with someone in the cage, that your whole attitude and posture was extremely hostile, and screamed defensive. You were sitting ramrod straight and had your arms crossed. When I glanced and seen this, my first thought was 'holy shit, she's about to go off on that dude.' Yet it seemed as if the dude didn't even realize it. I don't know what was being said, but everything about you said danger and you were not happy. I had never seen you like that before, and I stuttered stepped. (I forgot about the time you came to my cell because an officer said I was suicidal. You came to my door all hostile and wouldn't even let me talk.)

Just watching you and how you interact shows me that even though you're here to get paid, you are sincere in wanting to help people and make them feel good. It seems like it comes naturally to you.

Anyways, I have been treating my friends the wrong way, by expecting something from them. What has made me look at this is very simple and easy to understand if you know me. Since you made me want to live life now instead of just survive as I have been, I have decided that I must experience it all. But I have been experiencing the feeling of wanting to do whatever I can, or be the best I can, or help them be the best they can, and not want nothing in return! I sit here in my cell and I think about ways I can make them smile and laugh, or ways I can help them do something, or just basically, to make their life better, and my only reward that I want, is to see them smile or hear them laugh, or to know I did something that made their life easier. In other words, Ms. Wenzel, I see myself wanting to do this for someone else without ulterior motives. And that scares me, because it means I'm really changing. Before I would have been thinking about how I could profit from what I did for them.

Saying all that, Ms. Wenzel, it has now become clear to me, that I have been selfish to others and not been a true and real friend. It hurts to think that all these years, I had thought I was one of the best friends people could have. And now, I must face the fact that I wasn't. Now though, I can be a good or great friend to others, because it's not about me anymore Ms. Wenzel. It's about others, in as much as what I can do for them. Yeah, I know there must be 'boundaries' (damn it, why does that word always have to come up?) so I don't cross that line and go over-

Thanks for writing! I finished the transcription for your post.
I see the progress you are making and am so proud of you.It isn't easy changing when you have had a wall built around yourself so as not to get hurt. Vulnerability is a scary thing even for those who have their heads on straight as we all have areas we are afraid to travel. you have had many years building that safety barrier and it won't be easy to tear it down. Just take it slow working one area at a time and IT WILL HAPPEN. Best of luck and many prayers going forth to help you in your journey
(scanned reply – view as blog post)
uploaded June 6, 2017.  Original (PDF) 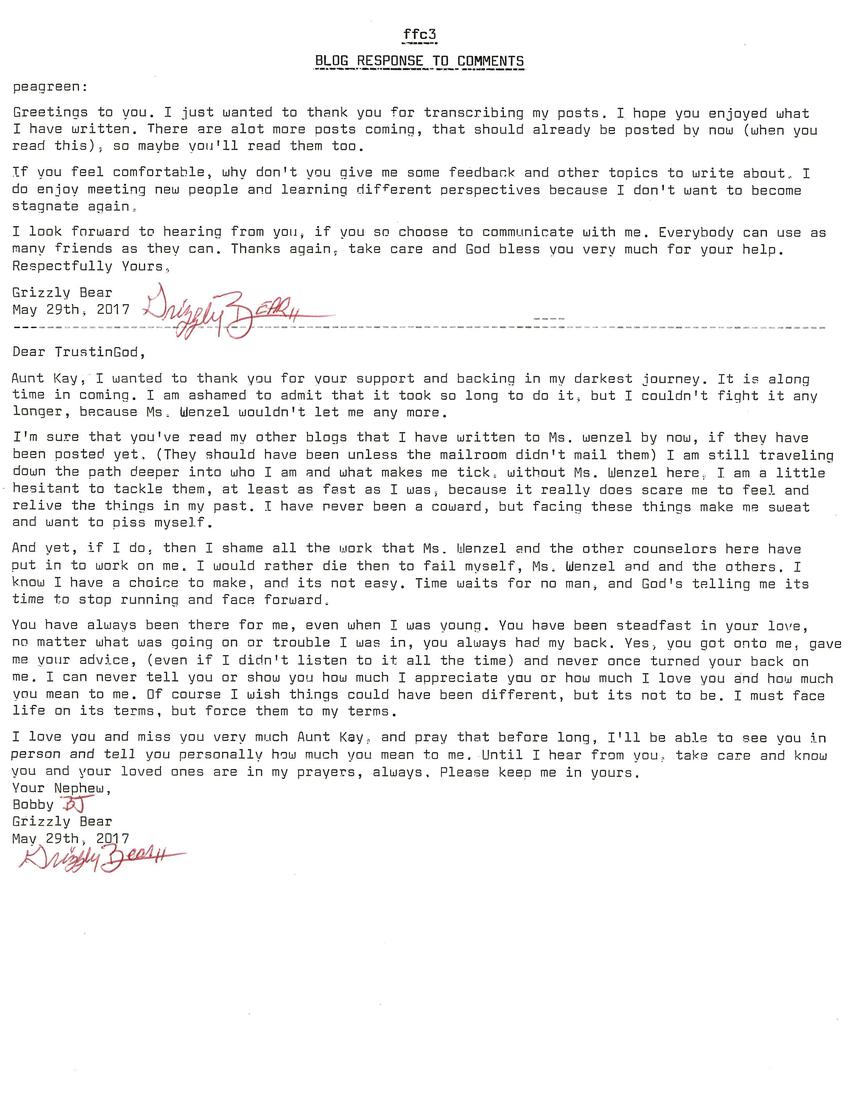