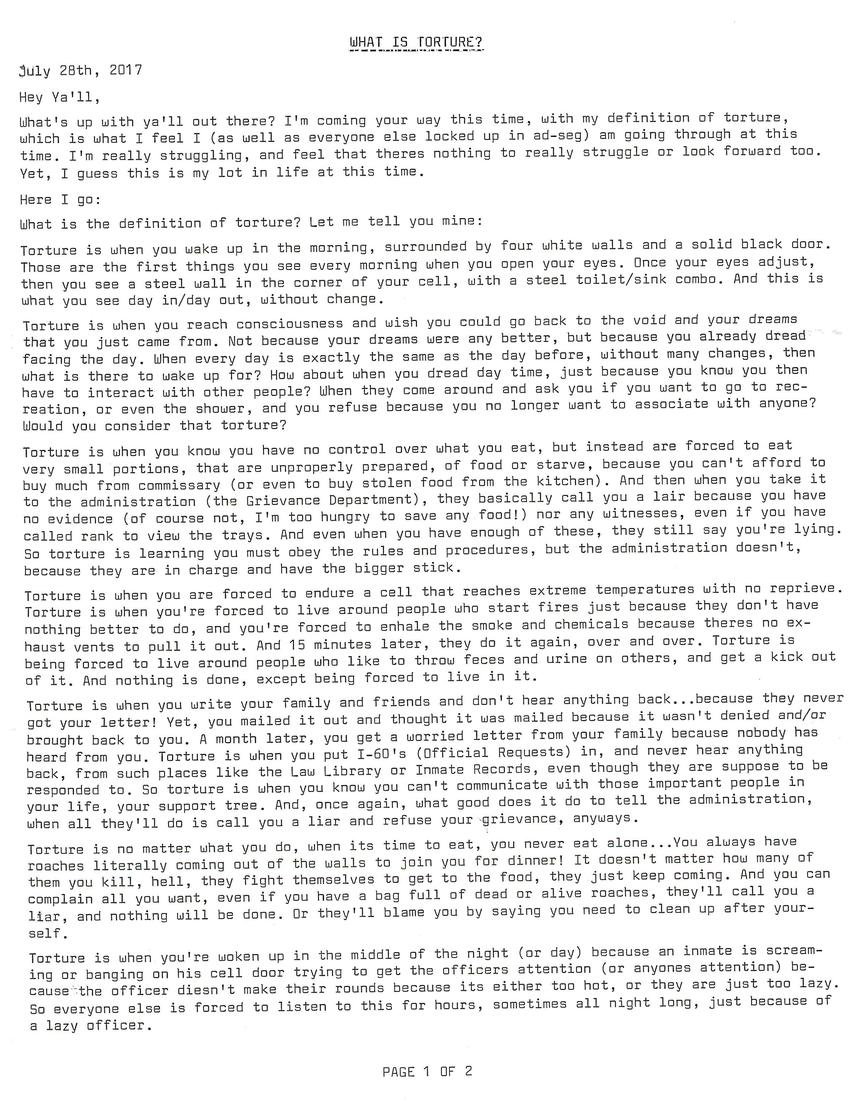 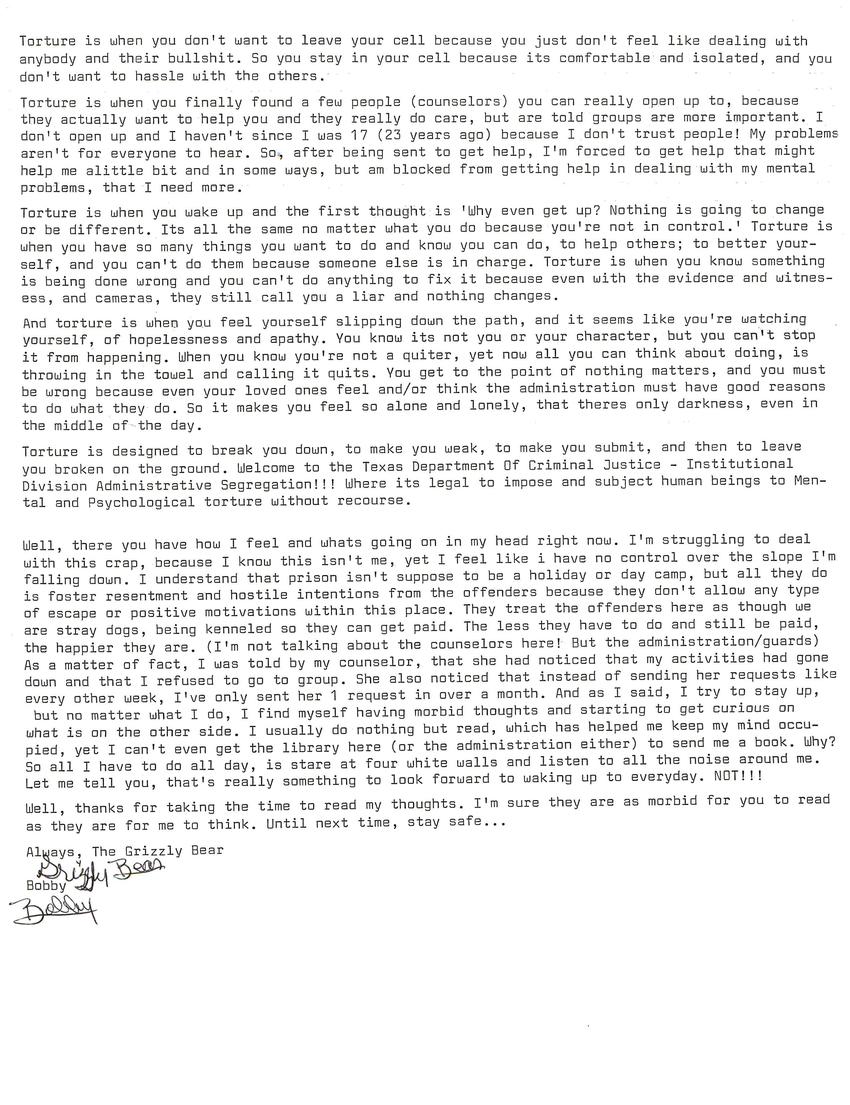 What's up with ya'll out there? I'm coming your way this time, with my definition of torture,
which is what I feel I (as well as everyone else locked up in ad-seg) am going through at this
time. I'm really struggling, and feel that theres nothing to really struggle or look forward too.
Yet, I guess this is my lot in life at this time.

What is the definition of torture? Let me tell you mine:

Torture is when you wake up in the morning, surrounded by four white walls and a solid black door.
Those are the first things you see every morning when you open your eyes. Once your eyes adjust.
then you see a steel wall in the corner of your cell, with a steel toilet/sink combo. And this is
what you see day in/day out, without change.

Torture is when you reach consciousness and wish you could go back to the void and your dreams
that you just came from. Not because your dreams were any better, but because you already dread
facing the day. When every day is exactly the same as the day before, without many changes, then
what is there to wake up for? How about when you dread day time, just because you know you then
have to interact with other people? When they come around and ask you if you want to go to recreation,
or even the shower, and you refuse because you no longer want to associate with anyone?
Would you consider that torture?

Torture is when you know you have no control over what you eat, but instead are forced to eat
very small portions, that are improperly prepared, of food or starve, because you can't afford to
buy much from commissary (or even to buy stolen food from the kitchen). And then when you take it
to the administration (the Grievance Department), they basically call you a liar because you have
no evidence (of course not, I'm too hungry to save any food!) nor any witnesses, even if you have
called rank to view the trays. And even when you have enough of these, they still say you're lying.
So torture is learning you must obey the rules and procedures, but the administration doesn't,
because they are in charge and have the bigger stick.

Torture is when you write your family and friends and don't hear anything back ... because they never
got your letter! Yte, you mailed it out and thought it was mailed because it wasn't denied and/or
brought back to you. A month later, you get a worried letter from your family because nobody has
heard from you. Torture is when you put I-60's (Official Requests) in, and never hear anything
back, from such places like the Law Library or Inmate Records, even though they are supposed to be
responded to. So torture is when you know you can't communicate with those important people in
your life, your support tree. And, once again, what good does it do to tell the administration,
when all they'll do is call you a liar and refuse your grievance, anyways?

Torture is no matter what you do, when it's time to eat ... you never eat alone ... You always have
roaches literally coming out of the walls to join you for dinner! It doesn't matter how many of
them you kill, hell, they fight themselves to get to the food, they just keep coming. And you can
complain all you want, even if you have a bag full of dead or alive roaches, they'll call you a
liar and nothing will be done. Or they'll blame you by saying you need to clean up after yourself.

Torture is when you're woken up in the middle of the night (or day) because an inmate is screaming
or banging on his cell door trying to get the officer's attention (or anyone's attention)
because the officer doesn't make their rounds because it's either too hot, or they are just too lazy.
So everyone else is forced to listen to this for hours, sometimes all night long, just because of
a lazy officer.

Torture is when you finally found a few people (counselors) you can really open up to, because
they actually want to help you and they really do care, but are told groups are more important. I
don't open up and I haven't since I was 17 (23 years ago) because I don't trust people! My problems
aren't for everyone to hear. So, after being sent to get help, I'm forced to get help that might
help me a little bit and in some ways, but am blocked from getting help in dealing with my mental
problems, that I need more.

Torture is when you wake up and the first thought is 'Why even get up? Nothing is going to change
or be different. It's all the same no matter what you do because you're not in control.' Torture is
when you have so many things you want to do and know you can do, to help others; to better yourself,
and you can't do them because someone else is in charge. Torture is when you know something
is being done wrong and you can't do anything to fix it because even with the evidence and witnesses,
and cameras, they still call you a liar and nothing changes.

And torture is when you feel yourself slipping down the path, and it seems like you're watching
yourself, of hopelessness and apathy. You know it's not you or your character, but you can't stop
it from happening. When you know you're not a quitter, yet not all you can think about doing, is
throwing in the towel and calling it quits. You get to the point of nothing matters, and you must
be wrong because even your loved ones feel and/or think the administration must have good reasons
to do what they do. So it makes you feel so alone and lonely, that there's only darkness, even in
the middle of the day.

Torture is designed to break you down, to make you weak, to make you submit, and then to leave
you broken on the ground. Welcome to the Texas Department of Criminal Justice - Institutional
Division Administrative Segregation!!! Where it's legal to impose and subject human beings to Mental and
Psychological torture without recourse.

Well, there you have how I feel and what's going on in my head right now. I'm struggling to deal
with this crap, because I know this isn't me, yet I feel like I have no control over the slope I'm
falling down. I understand that prison isn't supposed to be a holiday or day camp, but all they do
is foster resentment and hostile intentions from the offenders because they don't allow any type
of escape or positive motivations within this place. They treat the offenders here as though we
are stray dogs, being kenneled so they can get paid. The less they have to do and still be paid,
the happier they are. (I'm not talking about the counselors here! But the administration/guards)
As a matter of fact, I was told by my counselor, that she had noticed that my activities had gone
down and that I refused to go to group. She also noticed that instead of sending her requests like
every other week, I've only sent her 1 request in over a month. And as I said, I try to stay up,
but no matter what I do, I find myself having morbid thoughts and starting to get curious on
what is on the other side. I usually do nothing but read, which has helped me keep my mind occupied,
yet I can't even get the library here (or the administration either) to send me a book. Why?
So all I have to do all day, is stare at four white walls and listen to all the noise around me.
Let me tell you, that's really something to look forward to waking up to every day. NOT!!!

Well, thanks for taking the time to read my thoughts. I'm sure they are as morbid for you to read
as they are for me to think. Until next time, stay safe ...

I am so sorry and want you to know you are loved. We give illegals and terrorists better treatment then you it seems, yet all the outside hears is how great the Department is doing. Bull as I have had friends and relatives who worked in San Quentin and Folsom.They would speak of the mistreatment of prisoners by guards who just wanted some excitement.I may not write as often as I should as life seems to be going by at a faster rate each year but that isn't an excuse. hoping you aren't badly affected by the rain and flooding as there is nothing on the internet. And as there being anything on the other side there are only 2 things living with god by giving your life to Him or total destruction because the Bible doesn't describe Hell the way it has been taught in the churches.just remember as I have told you for years and I know (Paul?) has Jesus is always there to listen and give you the peace of mind to endure.
Thanks for writing - I finished the transcription for your post. God bless you.
Bobby Bayer,

Man I thought for sure you would be out by now !!

I was cleaning up my browser shortcuts and came across this one. To my surprise I see you are still "in". What is happening. I read your letter and can see you are quite despondent. Do you have access to a Bible?

Is anyone communicating or visiting with you? I am sorry that your comment is three years old, but it was my only link to you.