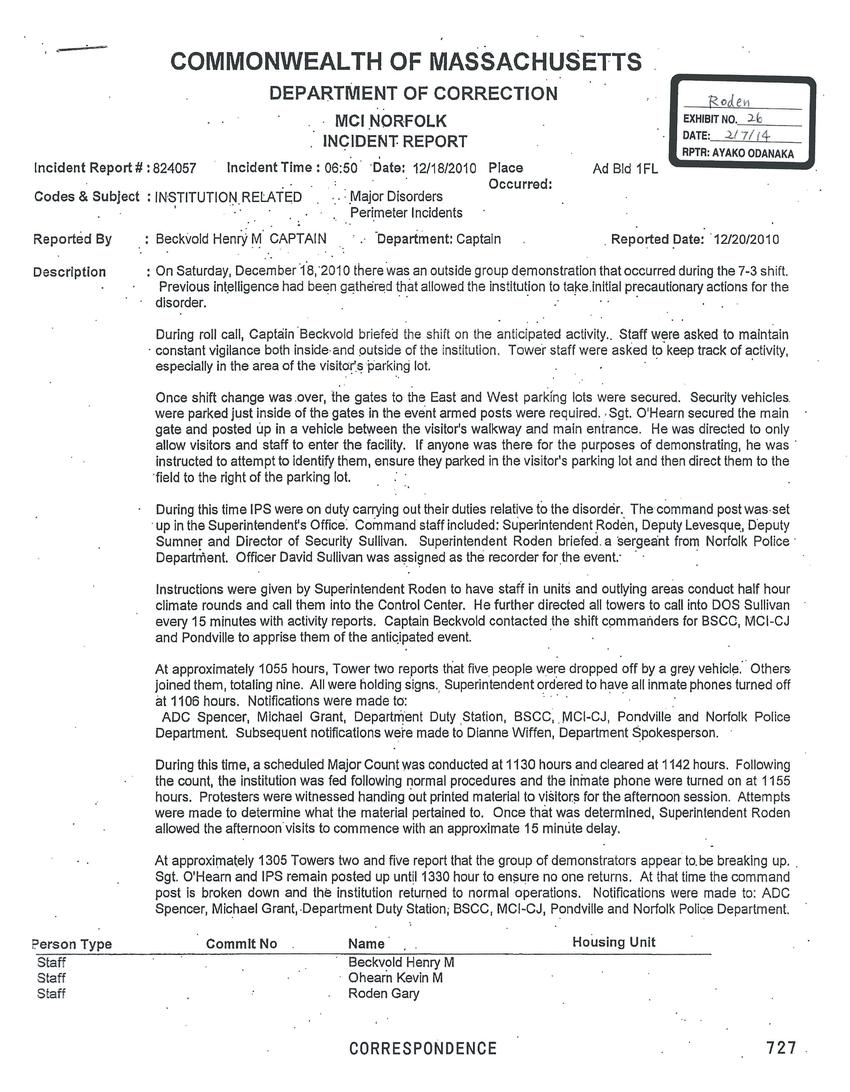 Description: On Saturday, December 18, 2010 there was an outside group demonstration that occurred during the 7-3 shift. Previous intelligence had been gathered that allowed the institution to take initial precautionary actions for the disorder.

During roll call, Captain Beckvold briefed the shift on the anticipated activity. Staff were asked to maintain constant vigilance both inside and outside of the institution. Tower staff were asked to keep track of activity, especially in the area of the visitor's parking lot.

Once shift change was over, the gates to the East and West parking lots were secured. Security vehicles were parked just inside of the gates in the event armed posts were required. Sgt. O'Hearn secured the main gate and posted up in a vehicle between the visitor's walkway and main entrance. He was directed to only allow visitors and staff to enter the facility. If anyone was there for the purpose of demonstrating, he was instructed to attempt to identify them, ensure they parked in the visitor's parking lot and then direct them to the field to the right of the parking lot.

During this time IPS were on duty carrying out their duties relative to the disorder. The command post was set up in the Superintendent's Office. Command staff included: Superintendent Roden, Deputy Levesque, Deputy Sumner and Director of Security Sullivan. Superintendent Roden briefed a sergeant from Norfolk Police Department. Officer David Sullivan was assigned as the recorder for the event.

Instructions were given by Superintendent Roden to have staff in units and outlying areas conduct half hour climate rounds and call them into the Control Center. He further directed all towers to call into DOS Sullivan every 15 minutes with activity reports. Captain Beckvold contacted the shift commanders for BSCC, MCI-CJ and Pondville to apprise them of the anticipated event.

At approximately 1055 hours, Tower two reports that five people were dropped off by a grey vehicle. Others joined them, totalling nine. Superintendent ordered to have all inmate phones turned off at 1106 hours. Notifications were made to:
ADC Spencer, Michael Grant, Department Duty Station, BSCC, MCI-CJ, Pondville and Norfolk Police Department. Subsequent notifications were made to Dianne Wiffen, Department Spokesperson.

During this time, a scheduled Major Count was conducted at 1130 hours and cleared at 1142 hours. Following the count, the institution was fed following normal procedures and the inmate phone were turned on at 1155 hours. Protestors were witnessed handing out printed material to visitors for the afternoon session. Attempts were made to determine what the material pertained to. Once that was determined, Superintendent Roden allowed the afternoon visits to commence with an approximate 15 minute delay.

At approximately 1305 Towers two and five report that the group of demonstrators appear to be breaking up. Sgt. O'Hearn and IPS remain posted up until 1330 hour to ensure no one returns. At that time the command post is broken down and the institution returned to normal operations. Notifications were made to: ADC Spencer, Michael Grant, Department Deputy Station, BSCC, MCI-CJ, Pondville and Norfolk Police Department.