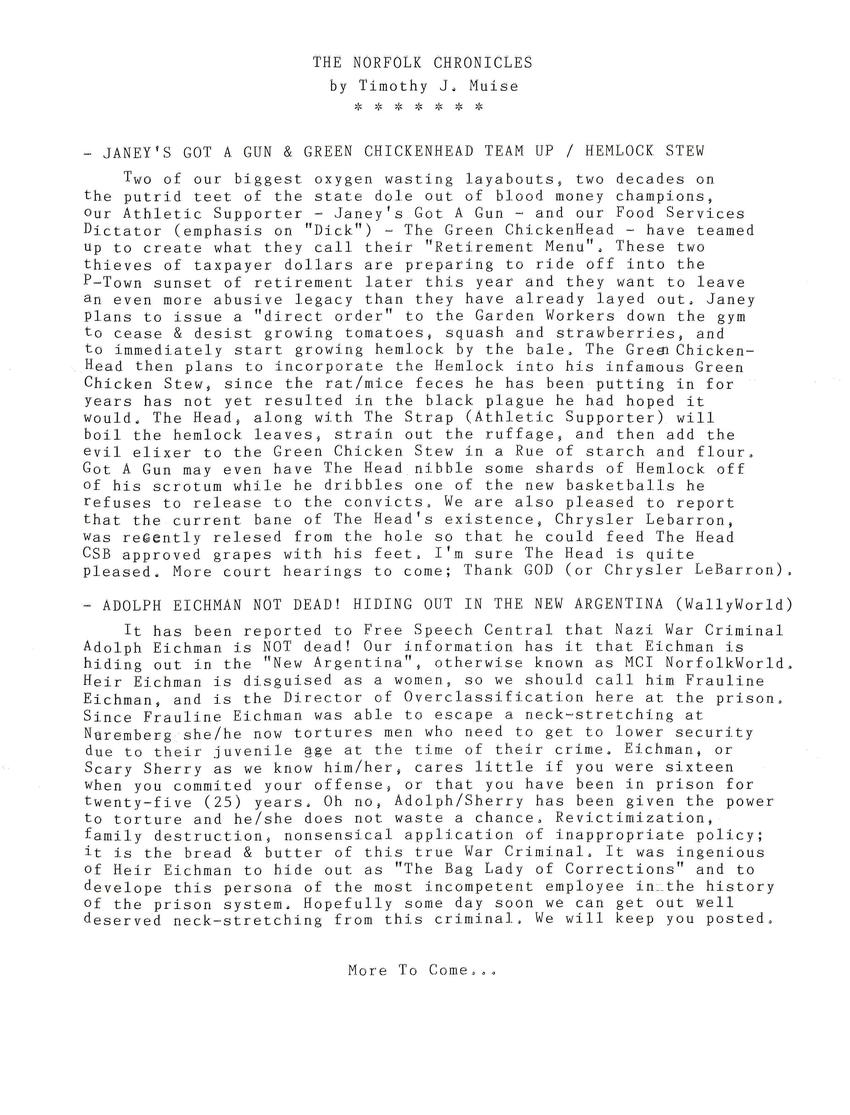 - JANEY'S GOT A GUN & GREEN CHICKENHEAD TEAM UP / HEMLOCK STEW

Two of our biggest oxygen wasting layabouts, two decades on the putrid teet of the state dole out of blood money champions, our Athletic Supporter - Janey's Got A Gun - and our Food Services Dictator (emphasis on "Dick") - The Green ChickenHead - have teamed up to create what they call their "Retirement Menu". These two thieves of taxpayer dollars are preparing to ride off into the P-Town sunset of retirement later this year and they want to leave an even more abusive legacy than they have already laid out. Janey plans to issue a "direct order" to the Garden Workers down the gym to cease & desist growing tomatoes, squash and strawberries, and to immediately start growing hemlock by the bale. The Green Chicken-Head then plans to incorporate the Hemlock into his famous Green Chicken Stew, since the rat/mice faeces he has been putting in for years has not yet resulted in the black plague he had hoped it would. The Head, along with The Strap (Athletic Supporter) will boil the hemlock leaves, strain out the ruffage, and then add thee evil elixir to the Green Chicken Stew in a Rue of starch and flour. Got A Gun may even have The Head nibble some shards of Hemlock off of his scrotum while he dribbles one of the new basketballs he refuses to release to the convicts. We are also pleased to report that the current bane of The Head's existence, Chrysler Lebarron, was recently released from the hole so that he could feed The Head CSB approved grapes with his feet. I'm sure The Head is quite pleased. More court hearings to come; Thank GOD (or Chrysler LeBarron).

- ADOLPH EICHMAN NOT DEAD! HIDING OUT IN THE NEW ARGENTINA (WallyWorld)

It has been reported to Free Speech Central that Nazi War Criminal Adolph Eichman is NOT dead! Our information has it that Eichman is hiding out in the "New Argentina", otherwise known as MCI NorfolkWorld. Heir Eichman is disguised as a woman, so we should call him Frauline Eichman, and is the Director of Overclassification here at the prison. Since Frauline Eichman was able to escape a neck-stretching at Nuremberg she/he now tortures men who need to get to lower security due to their juvenile age at the time of their crime. Eichman, or Scary Sherry as we know him/her, cares little if you were sixteen when you committed your offense, or that you have been in prison for twenty-five (25) years. Oh no, Adolph/Sherry has been given the power to torture and he/she does not waste a chance. Revictimization, family destruction, nonsensical application of inappropriate policy; it is the bread & butter of this true War Criminal. It was ingenious of Heir Eichman to hide out as "The Bag Lady of Corrections" and to develop this persona of the most incompetent employee in the history of the prison system. Hopefully some day soon we can get out well deserved neck-stretching from this criminal. We will keep you posted.