It's Just a Matter of Time 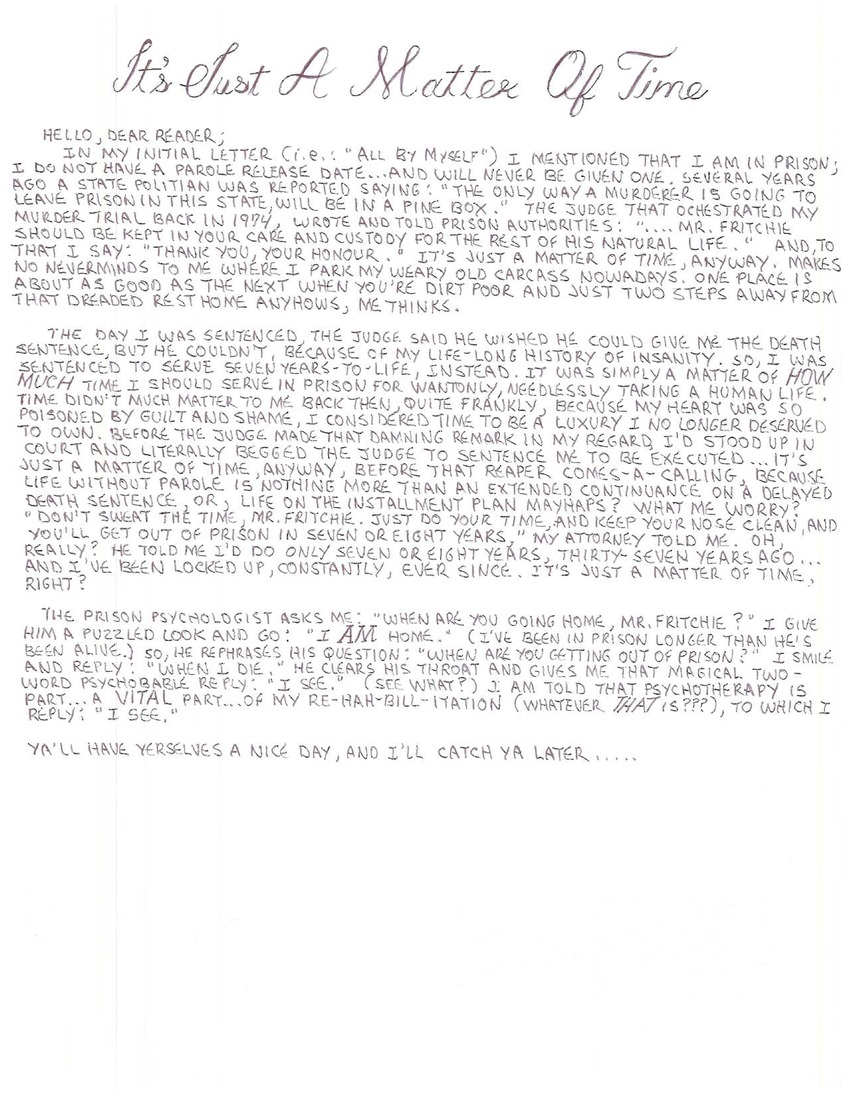 It's Just a Matter of Time

In my initial letter (i.e. "All by Myself"), I mentioned that I am in prison; I do not have a parole release date and will never be given one. Several years ago, a state politician was reported saying: "The only way a murderer is going to leave prison in this state will be in a pine box." The judge that orchestrated my murder trial back in 1974 wrote and told prison authorities: "...Mr. Fritchie should be kept in your care and custody for the rest of his natural life." And to that I say: "Thank you, your honor." It's just a matter of time, anyway. Never made me mind where I park my weary old carcass nowadays. One place is about as good as the next when you're dirt poor and just two steps away from that dreaded rest home anyhows, me thinks.

The day I was sentenced, the judge said he wished he could give me the death sentence. But he couldn't because of my lifelong history of insanity. So I was sentenced to serve seven years-to-life instead. It was simply a matter of how much time I should serve in prison for wantonly and needlessly taking a human life. Time didn't matter much to me back then, quite frankly, because my heart was so poisoned by guilt and shame. I considered time to be a luxury I no longer deserved to own. Before the judge made that damning remark in my regard, I'd stoop up in court and literally begged the judge to sentence me to be executed. It's just a matter of time anyway before that reaper comes-a-calling because life without parole is nothing more than an extended continuance on a delayed death sentence or life in the installment plan maybe. What, me worry?

"Don't sweat the time, Mr. Fritchie. Just do your time and keep your nose clean, and you'll get out of prison in seven or eight years," my attorney told me. Oh, really? He told me I'd only do seven or eight years, thirty-seven years ago. And I've been locked up, constantly, ever since. It's just a matter of time, right?

The prison psychologist asks me: "When are you going home, Mr. Fritchie?" I give him a puzzled look and go: "I AM home." I've been in prison longer than he's been alive. So he rephrases his question. "When are you getting out of prison?" I smile and reply: "When I die." He clears his throat and gives me that magical two word psychobable reply: "I see." (See what?) I am told that psychotherapy is part—a vital part—of my re-hah-bill-itation (whatever THAT is), to which I reply: "I see."

Y'all have yerselves a nice day, and I'll catch ya later...