The Pettiest Officer Of Them All = Green Chickenhead 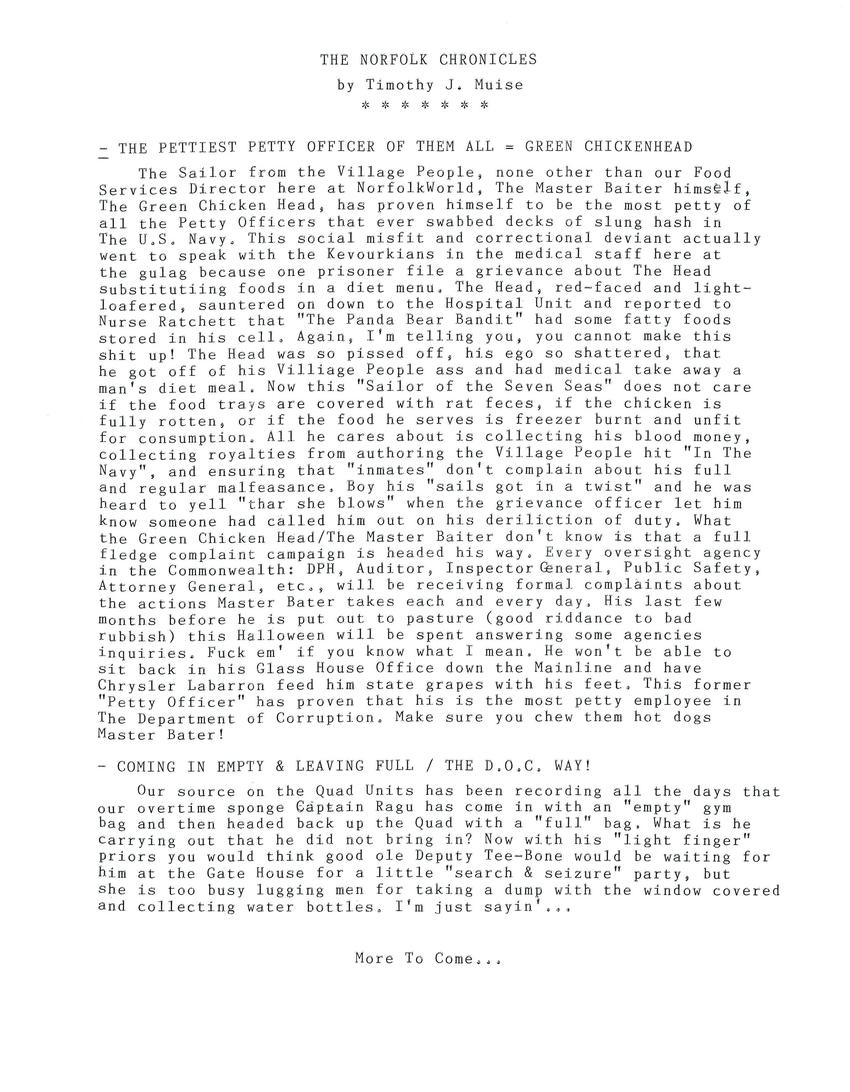 THE PETTIEST PETTY OFFICER OF THEM ALL = GREEN CHICKENHEAD

The Sailor from the Village People, none other than our Food Services Director here at NorfolkWorld, The Master Baiter himself, The Green Chicken Head, has proven himself to be the most petty of all the Petty Officers that ever swabbed decks of slung hash in The U.S. Navy. This social misfit and correctional deviant actually went to speak with the Kevourkians in the medical staff here at the gulag because one prisoner file a grievance about The Head Substituting foods in a diet menu. The Head, red-faced and light-loafered, sauntered on down to the Hospital Unit and reported to Nurse Ratchett that "The Panda Bear Bandit" had some fatty foods stored in his cell. Again, I'm telling you, you cannot make this shit up! The Head was so pissed off, his ego so shattered, that he got off his Village People ass and had medical take away a man's diet meal. Now this "Sailor of the Seven Seas" does not care if the food trays are covered with rat feces, if the chicken is fully rotten, or if the food he serves is freezer burnt and unfit for consumption. All he cares about is collecting his blood money, collecting royalties from authoring the Village People hit "In The Navy", and ensuring that "inmates" don't complain about his full and regular malfeasance. Boy his "sails got in a twist" and he was heard to yell "thar she blows" when the grievance officer let him know someone had called him out on his dereliction of duty. What the Green Chicken Head/The Master Baiter don't know is that a full fledge complaint campaign is headed his way. Every oversight agency in the Commonwealth: DHP, Auditor, Inspector General, Public Safety, Attorney General, etc., will be receiving formal complaints about the actions Master Bater takes each and every day. His last few months before he is put out to pasture (good riddance to bad rubbish) this Halloween will be spent answering some agencies inquiries. Fuck 'em if you know what I mean. He won't be able to sit back in his Glass House Office down the Mainline and have Chrysler Labarron feed him state grapes with his feet. This former "Petty Officer" has proven that his is the most petty employee in The Department of Corruption. Make sure you chew them hot dogs Master Bater!

Our source on the Quad Units has been recording all the days that out overtime sponge Captain Ragu has come in with an "empty" gym bag and then headed back up the Quad with a "full" bag. What is he carrying out that he did not bring in? Now with his "light finger" priors you would think good ole Deputy Tee-Bone would be waiting for him at the Gate House for a little "search & seizure" party, but she is too busy lugging men for taking a dump with the window covered and collecting water bottles. I'm just saying'...