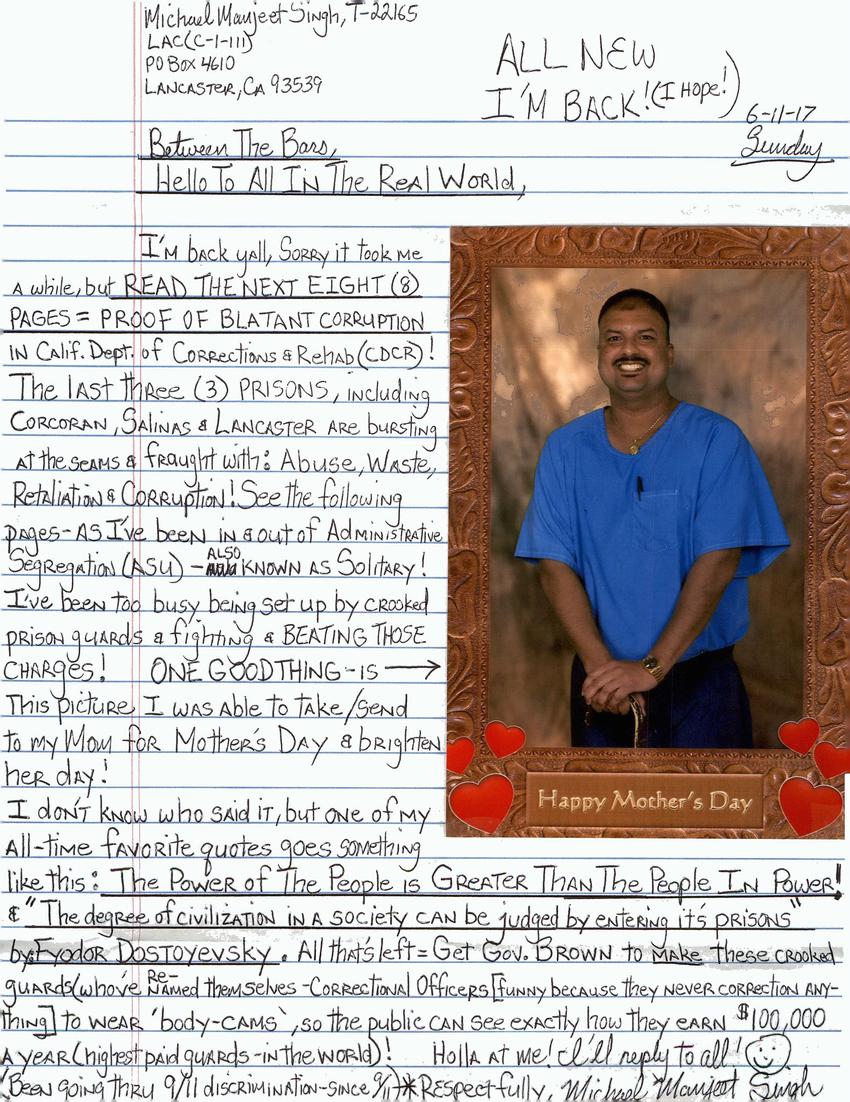 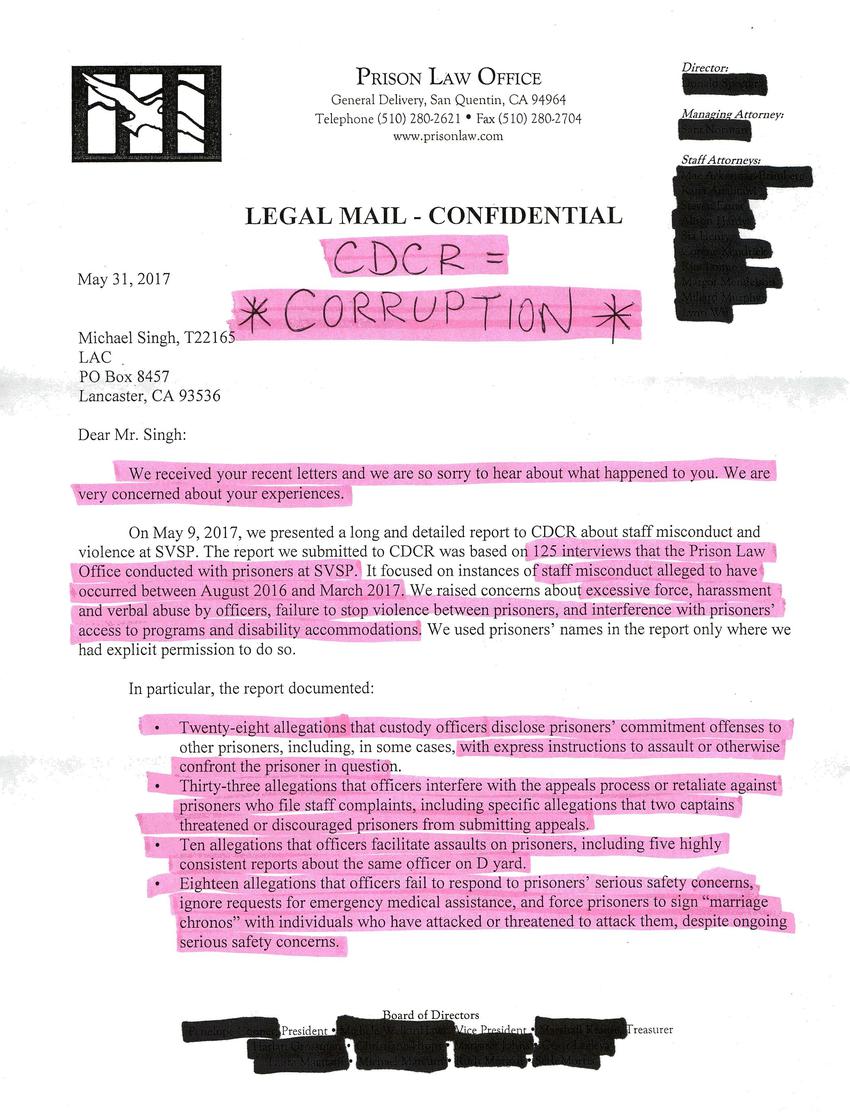 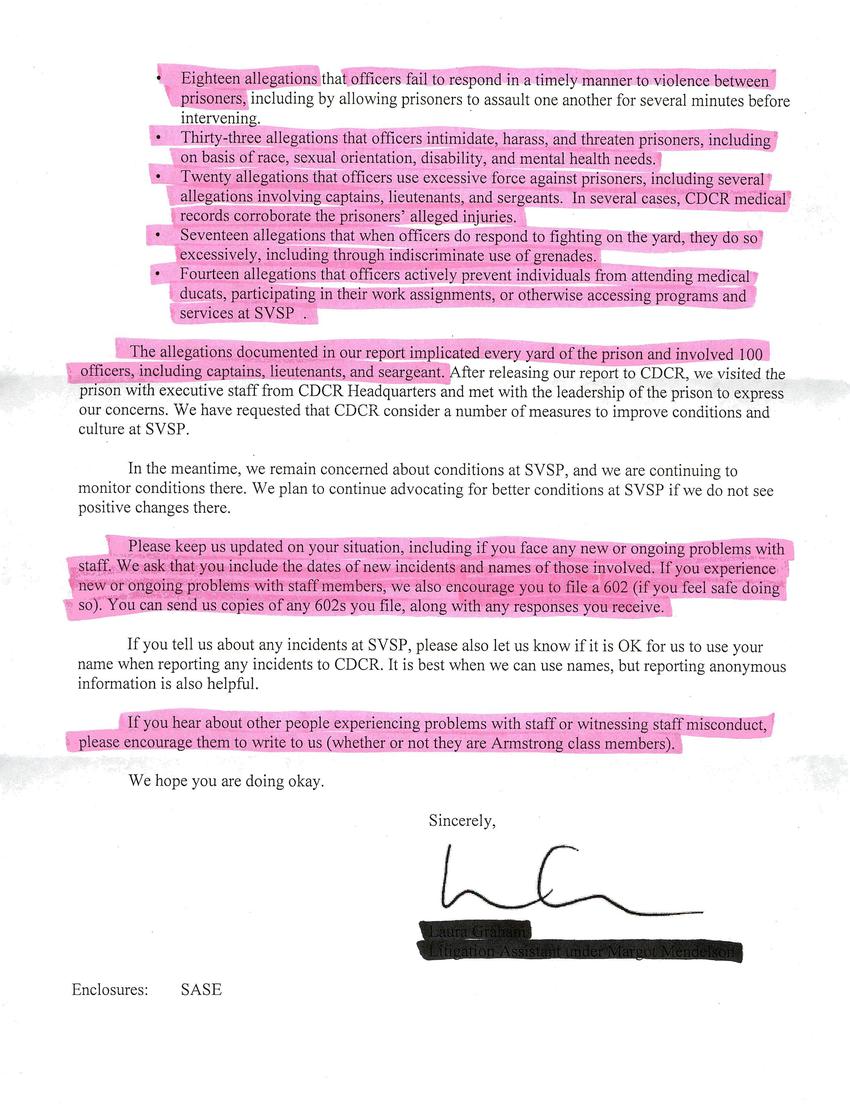 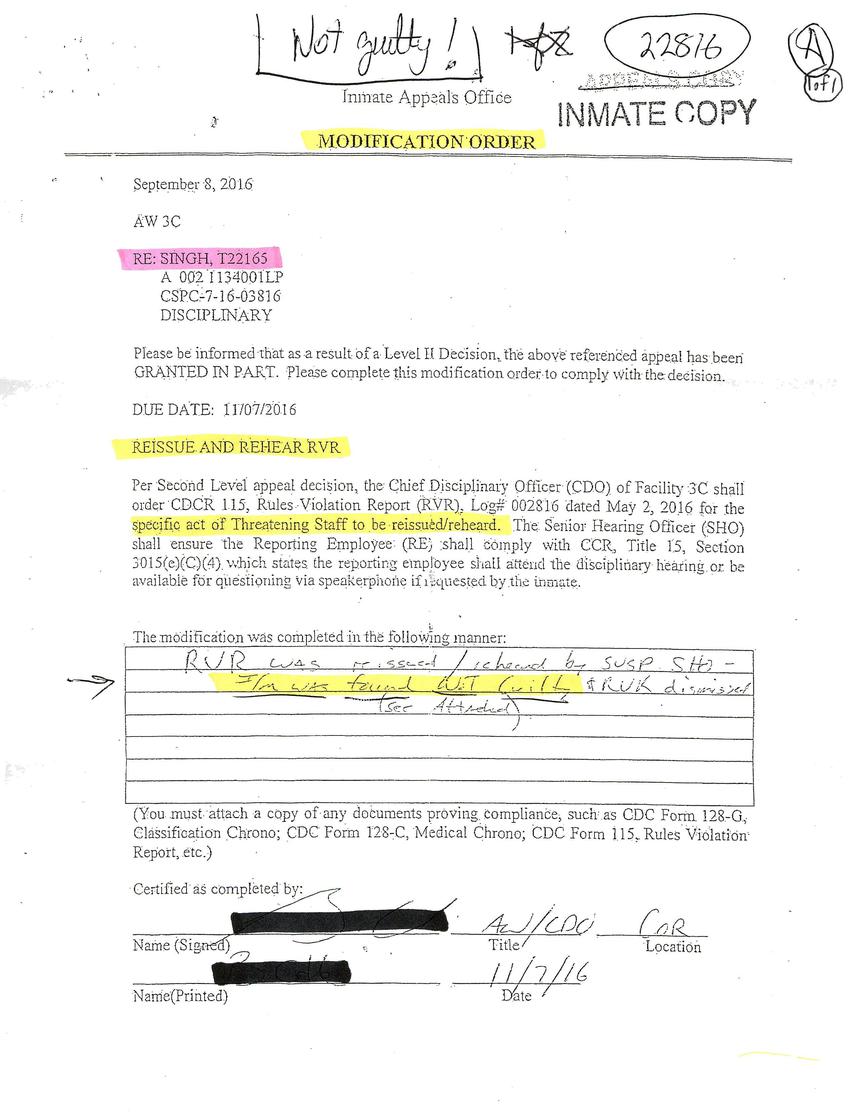 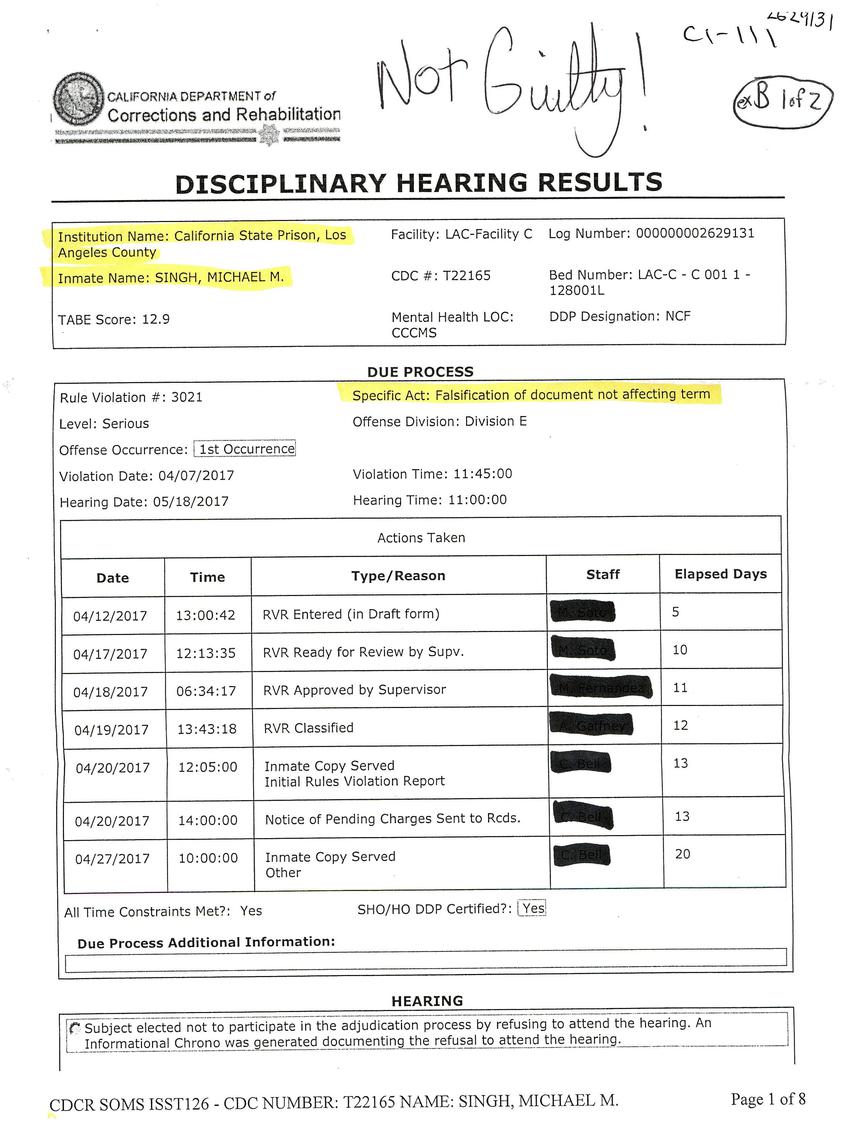 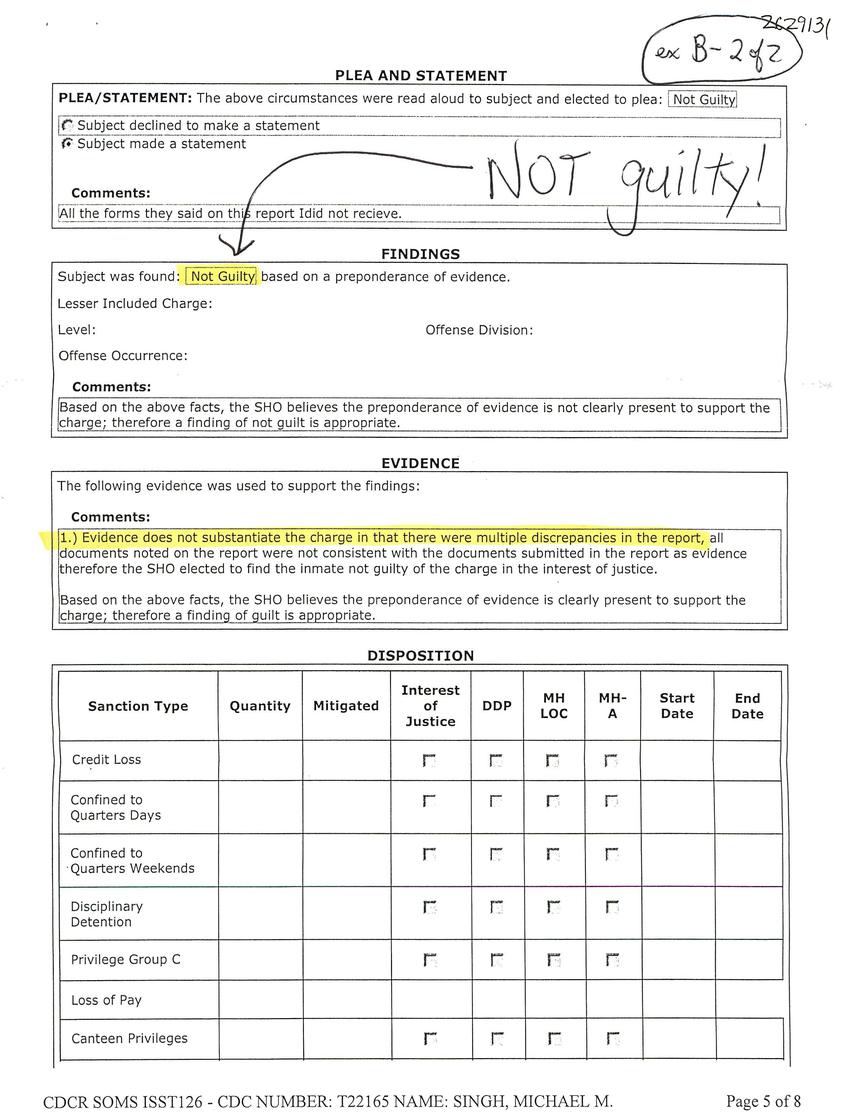 Between the Bars,
Hello To All In The Real World,

I'm back yall, Sorry it took me a while but READ THE NEXT EIGHT (8) PAGES = PROOF OF BLATANT CORRUPTION IN Calif. Dept. of Corrections & Rehab (CDCR)! The last three (3) PRISONS, including CORCORAN, SALINAS & LANCASTER ARE bursting at the seams & fraught with: Abuse, Waste, Retaliation & Corruption! See the following pages - As I've been in & out of Administrative Segregation (ASU) - ALSO KNOWN AS Solitary! I've been too busy being set up by crooked prison guards & fighting & BEATING THOSE CHARGES! ONE GOOD THING IS ---> [image - picture of Michael Singh above the words 'Happy Mother's Day'] This picture I was able to take/send to my mom for Mother's Day & brighten her day!
I don't know who said it, but one of my all-time favorite quotes goes something like this: The Power of The People is Greater Than The People In Power! & "The degree of civilization in a society can be judged by entering it's prisons" by: FYODOR DOSTOYEVSKY. All that's left = Get Gov. BROWN to make these crooked guards (who've re-named themselves - Correctional Officers [funny because they never correction anything] to wear 'body-cams', so the public can see exactly how they earn $100,000 a year (highest paid guards - in the world)! Holla At Me! I'll reply to all! Been going thru 9/11 discrimination - since 9/11) *Respectfully, Michael Manjeet Singh

We received your recent letters and we are so sorry to hear about what happened to you. We are very concerned about your experiences.

On May 9, 2017, we represented a long and detailed report to CDCR about staff misconduct and violence at SVSP. The report we submitted to CDCR was based on 125 interviews that the Prison Law Office conducted with prisoners at SVSP. It focused on instances of staff misconduct alleged to have occurred between August 2016 and March 2017. We raised concerns about excessive force, harassment and verbal abuse by officers, failure to stop violence between prisoners, and interference with prisoners' access to programs and disability accommodations. We used prisoners' names in the report only where we had explicit permission to do so.

In particular, the report documented:

The allegations documented in our report implicated every yard of the prison and involved 100 officers, including captains, lieutenants, and seargeant. After releasing our report to CDCR, we visited the prison with executive staff from CDCR Headquarters and met with the leadership of the prison to express our concerns. We have requested that CDCR consider a number of measures to improve conditions and culture at SVSP.

Please keep us updated on your situation, including if you face any new or ongoing problems with staff. We ask that you include dates of new incidents and names of those involved. If you experience new or ongoing problems with staff members, we also encourage you to file a 602 (if you feel safe doing so). You can send us copies of any 602s you file, along with any responses you receive.

If you tell us about any incidents at SVSP, please also let us know if it is OK for us to use your name when reporting any incidents to CDCR. It is best when we can use names, but reporting anonymous information is also helpful.

If you hear about other people experiencing problems with staff or witnessing staff misconduct, please encourage them to write to us (whether or not they are Armstrong class members).

We hope you are doing okay.

Please be informed that as a result of a Level II Decision, the above referenced appeal has been GRANTED IN PART. Please complete this modification order to comply with the decision.

Per Second Level appeal decision, the Chief Disciplinary Officer (CDO) of Facility 3C shall order CDCR 115, Rules Violation Report (RVR), Log# 002816 dated May 2, 2016 for the specific act of Threatening Staff to be reissued/reheard. The Senior Hearing Officer (SHO) shall ensure the Reporting Employee (RE) shall comply with CCR, Title 15, Section 3015(e)(C)(4) which states the reporting employee shall attend the disciplinary hearing or be available for questioning via speakerphone if requested by the inmate.

The modification was complete in the following manner:
RVR was reissued/reheard by SUSP SHO - I/M was found NOT GUILTY & RVR dismissed (see Attached)

Certified as completed by:

PLEA/STATEMENT: The above circumstances were read aloud to subject and elected to plea: Not Guilty

Not guilty!
Comments:
All the forms they said on this report I did not receive.

FINDINGS
Subject was found: Not Guilty based on a preponderance of evidence.

Comments:
Based on the above facts, the SHO believes the preponderance of evidence is not clearly present to support the charge; therefore a finding of not guilt is appropriate.

EVIDENCE
The following evidence was used to support the findings:

Based on the above facts, the SHO believes the preponderance of evidence is clearly present to support the charge; therefore a finding of guilt is appropriate.

CALIFORNIA DEPARTMENT of Corrections and Rehabilitation

PLEA AND STATEMENT
PLEA/STATEMENT: The above circumstances were read aloud to subject and elected to plea: Not Guilty

Comments:
I have never threatened staff.

FINDINGS
Subject was found: Not Guilty based on a preponderance of evidence.
Lesser Included Charge:
Level:
Offense Occurrence:
Offense Division:

EVIDENCE
The following evidence was used to support the findings:

ENEMY CONCERNS
Not Applicable
[box ticked] Subject states he/she does not have Enemy or Safety Concerns.
One or more of the inmates involved has stated there is lingering animosity towards one another. Therefore, the SHO has entered non-confidential separation alerts for the following inmates: