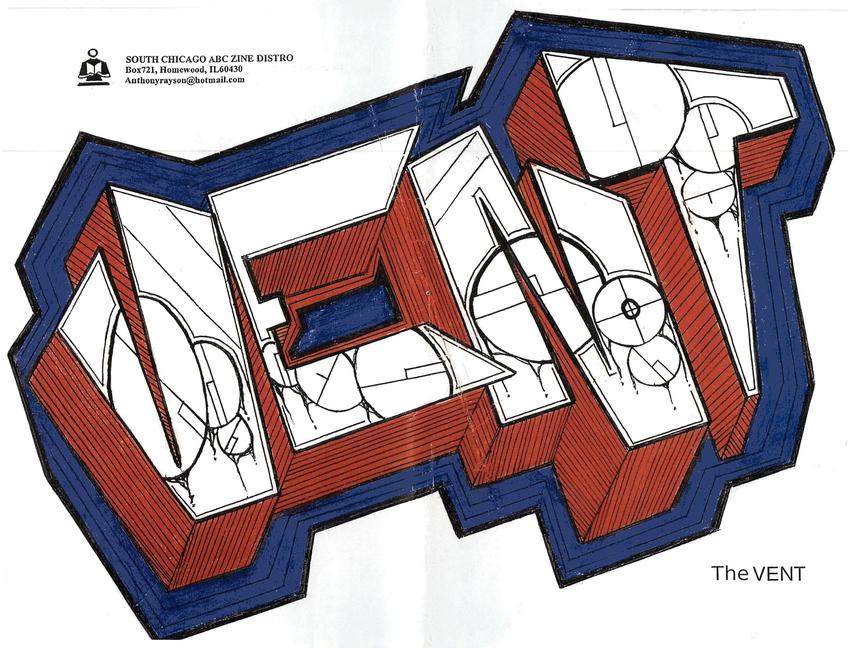 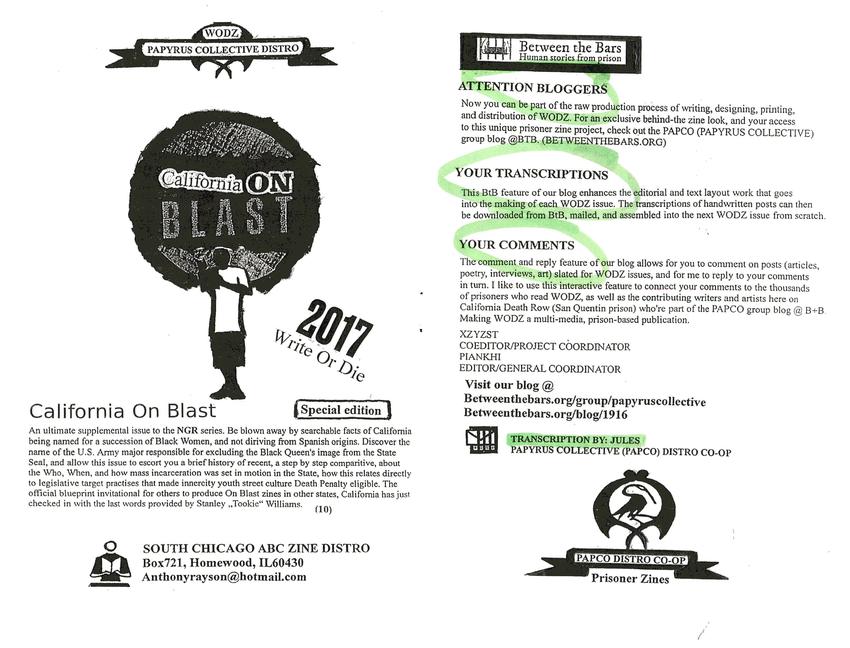 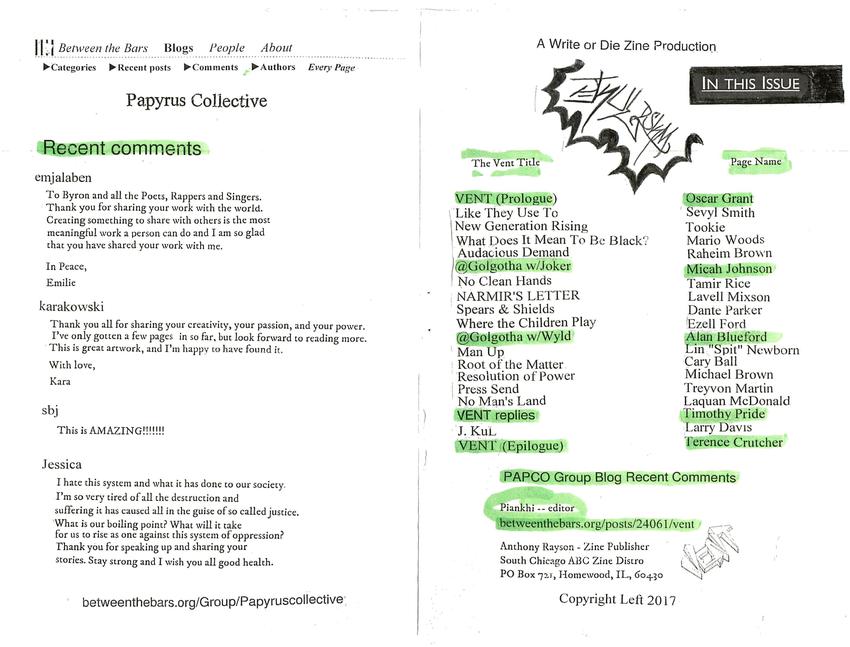 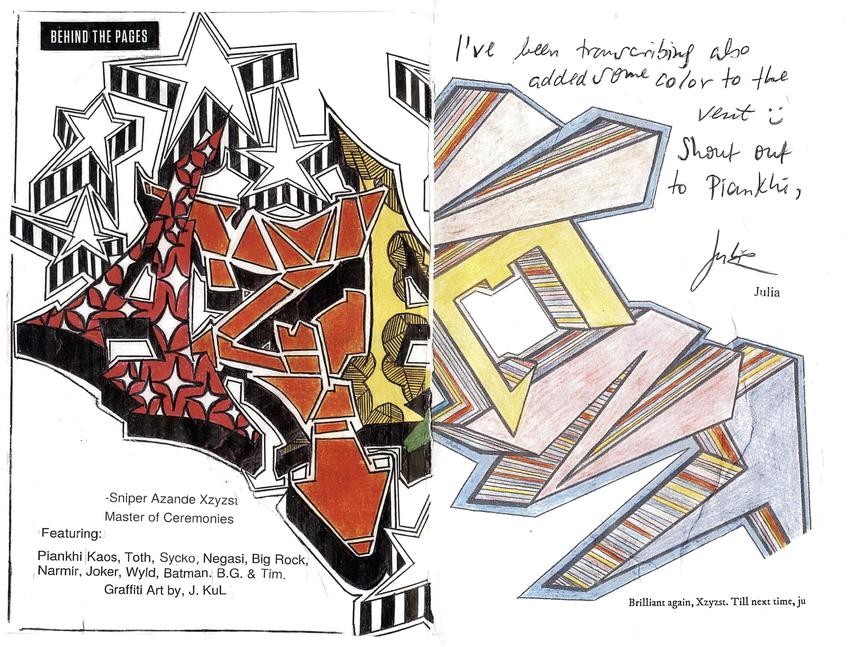 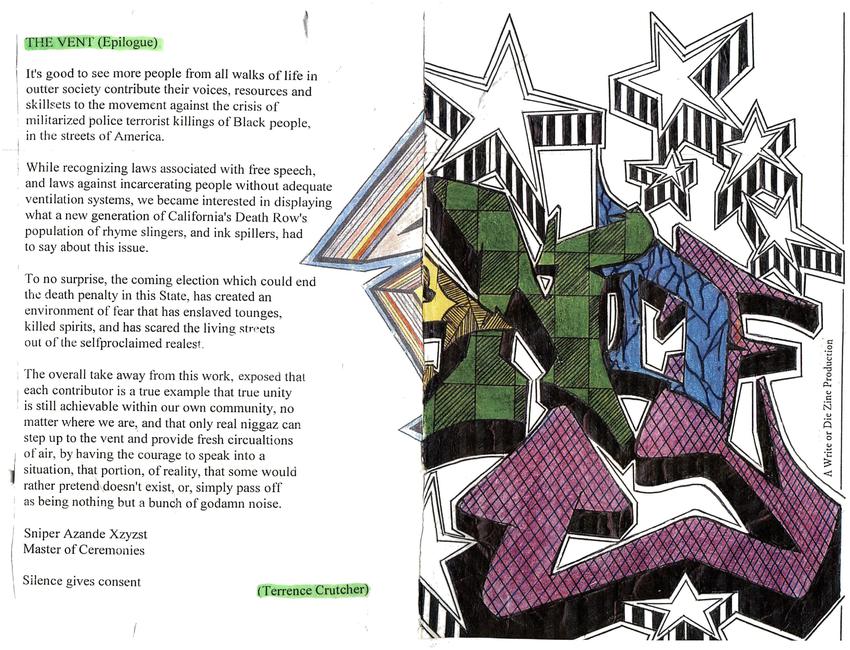 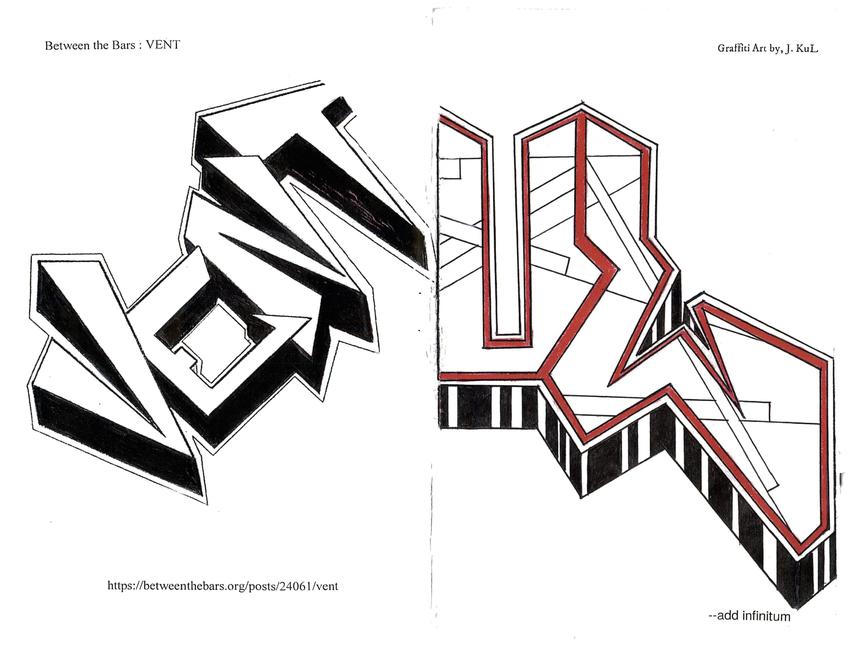 California On Blast Special Edition
An ultimate supplemental issue to the NGR series. Be blown away by searchable facts of California being named for a succession of Black Women, and not deriving from Spanish origins. Discover the name of the U.S. Army major responsible for excluding the Black Queen's image from the State Seal, and allow this issue to escort you a brief history of recent, a step by step comparative, about the Who, When and how mass incarceration was se in motion in the State, how this relates directly to legislative target practices that made innercity youth street culture Death Penalty eligible. The official blueprint invitational for others to produce On Blast zines in other states, California has just checked in with the last words provided by Stanley "Tookie" Williams.
(10)

Between the Bars
Human stories from prison

Now you can be part of the raw production process of writing, designing, printing, and distribution of WODZ. For an exclusive behind-the-zine look, and your access to this unique prisoner zine project, check out the PAPCO (PAPYRUS COLLECTIVE) group blog @BTB. (BETWEENTHEBARS.ORG)

This BtB feature of our blog enhances the editorial and text layout work that goes into the making of each WODZ issue. The transcriptions of handwritten posts can then be downloaded from BtB, mailed, and assembled into the next WODZ issue from scratch.

The comment and reply feature of our blog allows for you to comment on posts (articles, poetry, interviews, art) slated for WODZ issues, and for me to reply to your comments in turn. I like to use this interactive feature to connect your comments to the thousands of prisoners who read WODZ, as well as the contributing writers and artists here on California Death Row (San Quentin prison) who're part of the PAPCO group blog @ B+B Making WODZ a multi-media, prison-based publication.

emjalaben
To Byron and all the Poets, Rappers and Singers. Thank you for sharing your work with the world. Creating something to share with other is the most meaningful work a person can do and I am so glad that your have shared your work with me.

karakowski
Thank you all for sharing your creativity, your passion, and your power. I've only gotten a few pages in so far, but look forward to reading more. This is great artwork, and I'm happy to have found it.

Jessica
I hate this system and what it has done to our society. I'm so very tired of all the destruction and suffering it has caused all in the guise of so called justice. What is our boiling point? What will it take for us to rise as one against this system of oppression? Thank you for speaking up and sharing your stories. Stay strong and I wish you all good health.

A Write or Die Zine Production

[VENT coloured in]
I've been transcribing also added some color to the vent :) Shout out to Piankhi,

It's good to see more people from all walks of life in outer society contribute their voices, resources and skillsets to the movement against the crisis of militarized police terrorist killings of Black people, in the streets of America.

While recognizing laws associated with free speech, and laws against incarcerating people without adequate ventilation systems, we became interested in displaying what a new generation of California's Death Row's population of rhyme slingers, and ink spillers, had to say about this issue.

To no surprise, the coming election which could end the death penalty in this State, has created an environment of fear that has enslaved tongues, killed spirits, and has scared the living streets out of the self-proclaimed realest.

The overall take away from this work, exposed that each contributor is a true example that true unity is still achievable within our own community, no matter where we are, and that only real niggaz can step us to the vent and provide fresh circulations of air, by having the courage to speak into a situation, that portion, of reality, that some would rather pretend doesn't exist, or, simply pass off as being nothing but a bunch of goddamn noise.

[image of graffiti writing]
A Write or Die Zine Production

Between the Bars: VENT
Graffiti Art by, J. Kul

Vent - to give vigorous or emotional expression to, an opportunity, or way of escape, or passage, or relief of pressure, to cause fresh air to circulate, so as to replace foul air.

Welcome to The Vent,
a subculture within a subculture. So, imagine, well, just those of you who haven't already experienced this, but imagine being arrested in America, oh lawd!

Yes, it's personal, and life just got real, on unexpected levels, you're sitting in a jail cell, prison cell, or Juvenile Detention cell, like so many of us, you hear sounds of rhythmic pounding; designers of institutions renders every captive blind, so there is no way you can see where the sounds are coming from, so, where is it coming from?

The sink? No, The toilet? yeah maybe, but for You, hell no, it's got to be the air vent, right? And by captive nature, you climb on top of the sink to press your ear against the air vent and discover an underworld, in real time, live sessions of other worldly spoken word performances, recitals of Poetic Asides, political dialogue, and commentary, All day, all night rap battles, and some of the best singing you've ever heard No busters allowed clause in full effect.

Massive euphoria, applause, oohz and awwhhz, laughter, and the thick tension of silence when you hear voices inside the vent calling out to you, mostly to see if the new homie got flows, as the vent craves new energy.

Now, for a few of the elderly, the haters, and racist cops, all of this ain't nothing but a bunch of goddamn noise, and even those brief Rude interruptive static moments seem to be a natural component to what happens inside of the Vent, locked up, and locked down, and yet, still free.

A human beatboxer, or Table D.J. are the first people in our generation known to have spoken about this subterranean history, of musical and social connective creative space, that incarcerated Americans experienced before, during, and after many Civil Rights Movements and eras dating back into the days of blatant slavery.

Same songs, different lyrics, same movement, different generation, same hateful enemy, new solidarity of love, where the killing of dead time, with the energy of live entertainment, from some of the youngest voices that can only be heard, when the souls of the inner city streets of America consolidate in true power, simply by breathing in the fresh air of the fresh circulation of Will, and determination, flowing through the ventilation system of incarceration.

For this demo, we requested each contributing scribble to identify by street Tribal name only, to highlight and honor the names located on each page, of just a few, of the thousands of victims, of militarized police terrorist murders, of American inner city youth, hey, y'all ready for some grimy consciousness?

So, without further adulation, Ladies and Gentlemen, again, welcome to The Vent, in prisoner zine format, at California death row.
Dialect and Slang

Man I can't even call it, it's scary
this solitary confinement, no commissary,
to dine in, tryin hard to keep my thoughts str8
God got a plan for me what is my fate
I know it's not to sit here and rot in this place
I'm cryin on tha inside but all you see is mean mugz
having visions of my paper is what I dream of
But what am I to do while I'm locked in this pit
visualizing tha streets but I wake up staring at bricks
I'm sick and tired of being tired, what's required of a Rider homie
I'm not a sympathizer, I'll light a nigga ass on fire
And they tell me don't ever fire a bitch while you in the penitentiary
letters and visits is cool, but bread is what I really neeed
For my Ndugus, c-walkers and Su-woops, who was makin boo coo
bucks and they bitched fell out like loose tooths
now she act like she don't know me and she know I was rappin Ru's
situation got ugly not she don't love me like she used to
She don't love me like she use to and now she found somebody new
What is she gonna do, He don't love me like he use to
yeah tha homies acting brand new what are they gonna do
Family don't love me like they use to, I don't hear nothing but bad news
What are we gonna do, damn man I been down for a minute
Tell-Me-What-Am-I-gonna do
I'm tryin hard to get out but still stuck in this predicament tryin to
collect my dividends I was living like a stick up Man, hit a lick again
I will stick it in ya face and tell you open up the safe, I'm on a major
paper chase for paper from the caper to the razor, pistol packin
blastin shit even though I knew law and now I'm sittin in my cell
in nothin but socks and draws, it's not the life for a gangsta man,
never that, Babylons took my paper and I will never get that
cheddar back. Easy come easy go they make it to where we can't
stack it, you gotta learn don't put ya eggs all in the same basket.
Always roll solo man I found out the hard way, now I'm stuck
between a rock and a hard place, I'm deep in this game man, now
in too deep to get out, my dick so deep in her mouth I feel what
she thinking about. Now what am I gone do if I get out of jail
knock a hoe and collect my mail, then build up my clientele, stop
staring at me breakin ya keck, like I'm a fine hoe, when I get to
bustin you runnin like I'm tha 5.0, I'm doing time but you act like I
died nigga I should shoot you out there claiming what's mine, why don't
you love me like you use to.
(Sevyl Smith)

So this is all good, talking about the "Resolution Of Power", but there is already Black Cops, Mayors, and political figures, and things are getting worse in the hood. I mean it's great to work with kids, but it would also be even greater to see love given to the young people already caught up.
-Trisha B.

If people aren't allowed to Vent, the U.S.A. could self destruct, so this is a cool starter idea.
-YoungSeven7

I'm used to hearing Rap, but reading this stuff brings it home where nobody is listening but us.
-Word2tha

Unk, thanks for letting me see some of the artwork, savage on some savage. The words, is making me think about some shit tho.
-Da'Kid

A little too much cussing for an old man like me, but I did a DUI, in tha county jail and actually heard this, you guys did a good job with this, when the zine comes out, send me one so I can give it to my wife's young neff @risk, he needs it.
-Carl J.

We've all been sitting here looking at this, everybody likes it, I started crying because all of the writers are on death row, so much talent, we love you out there, and my favorite is the one by Kaos, love you boo.
-Brig

Wyld and Joker got skillz, I see you still at it, this used to be us all day, I'll shoot you a lil something to put in the zine, tell Wyld and Joker I said save a few bars for me, I'm comin wit it.
-Striker8