A Sermon from Death Row 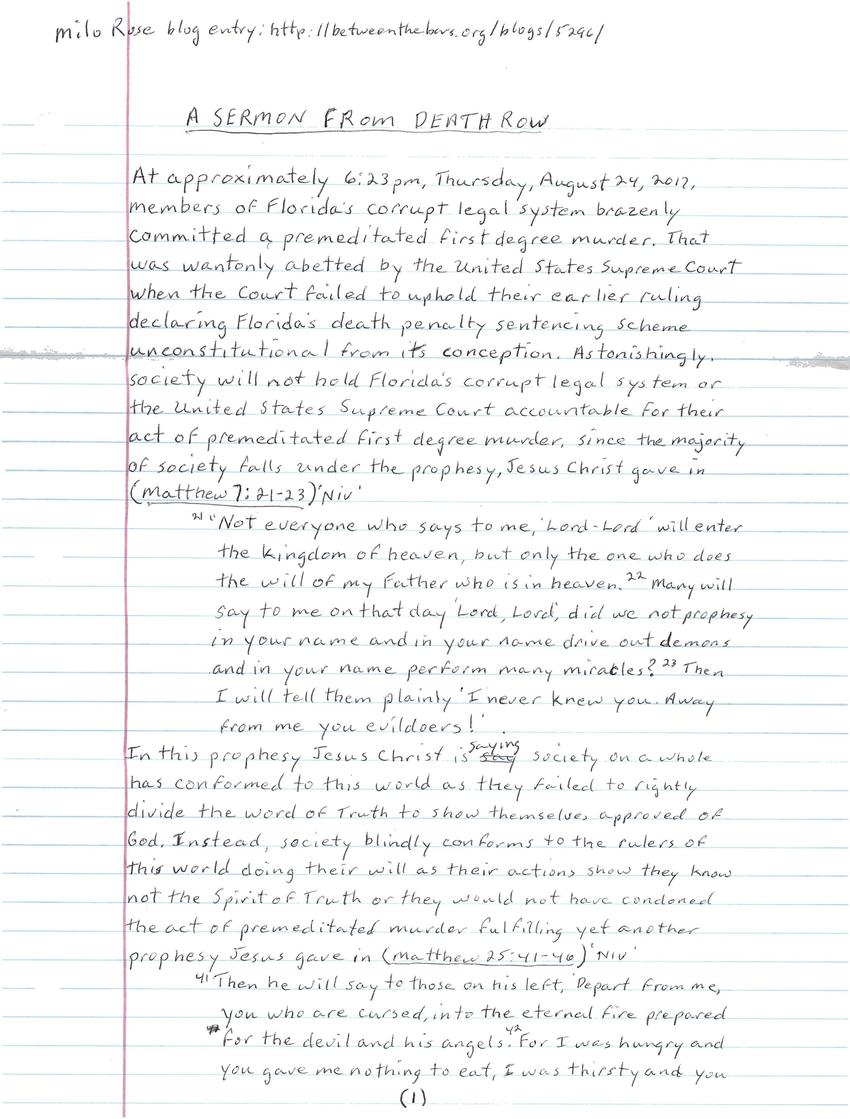 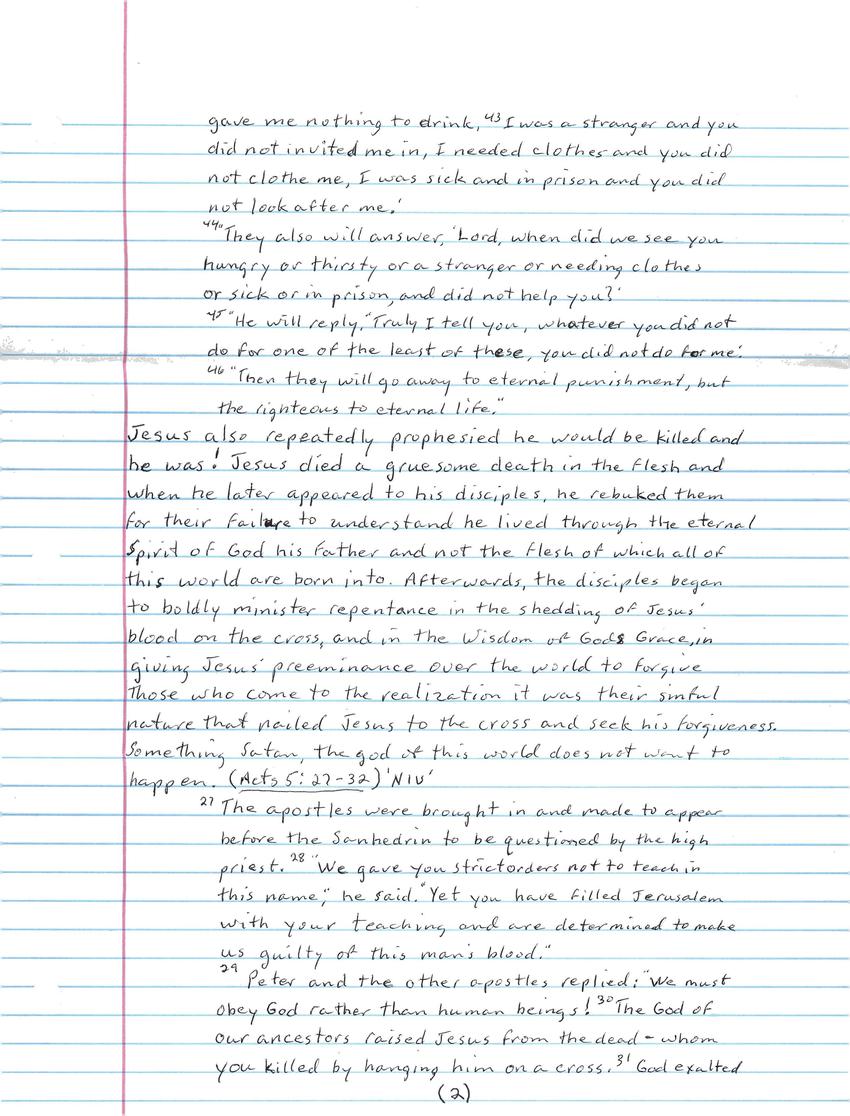 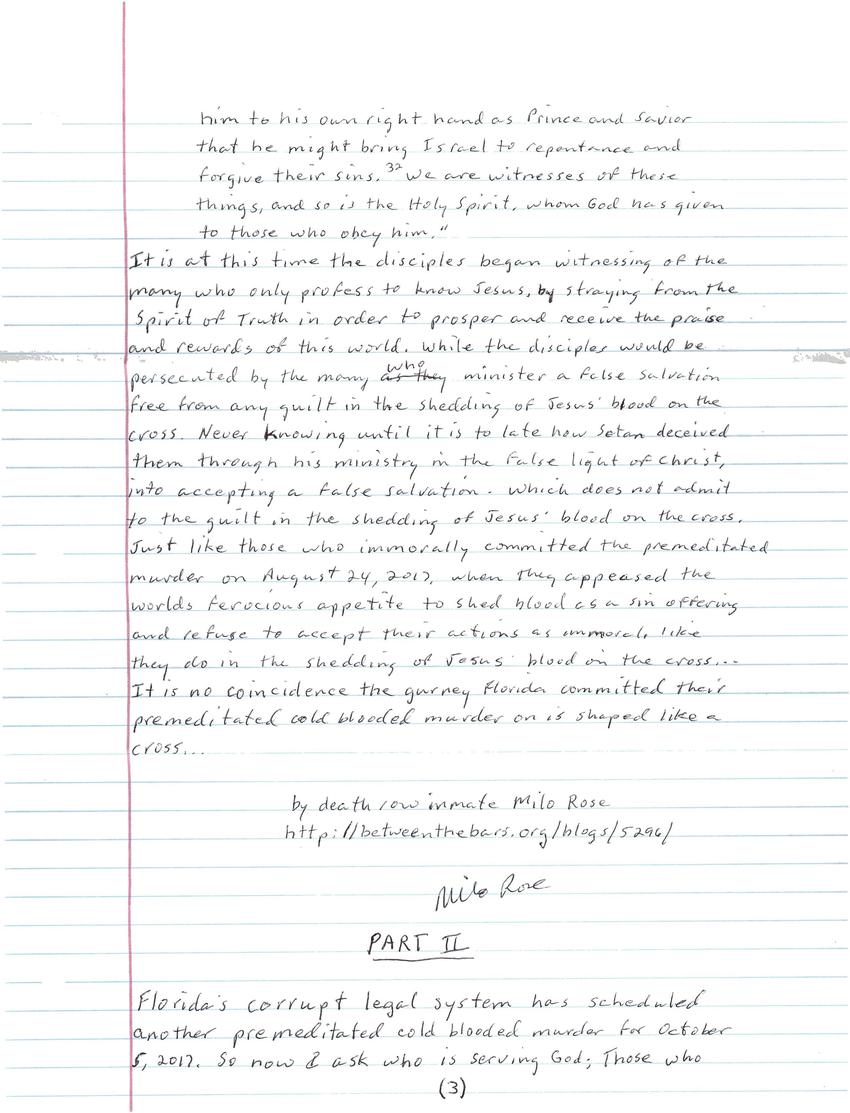 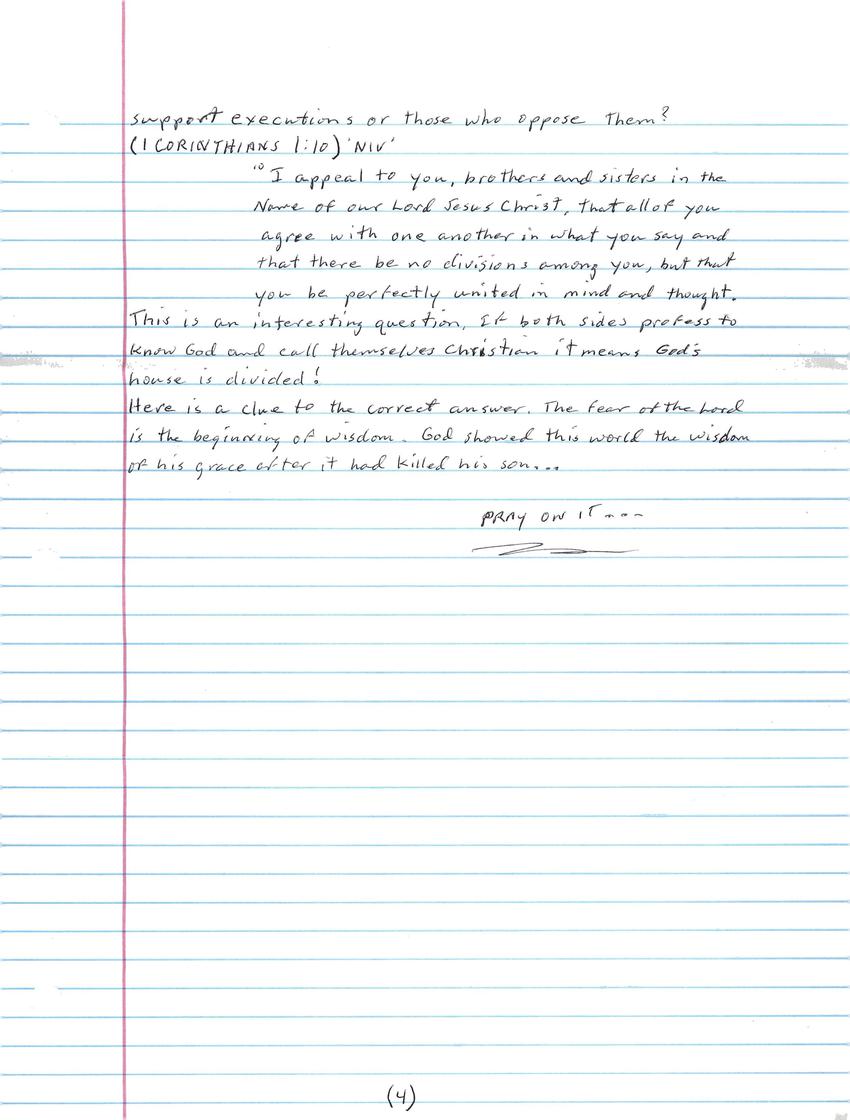 A SERMON FROM DEATH ROW

At approximately 6:23 pm, Thursday, August 24, 2017, members of Florida's corrupt legal system brazenly committed a premeditated first degree murder. That was wantonly abetted by the United States Supreme Court when the Court failed to uphold their earlier ruling declaring Florida's death penalty sentencing scheme unconstitutional from its conception. Astonishingly, society will not hold Florida's corrupt legal system or the United States Supreme Court accountable for their act of premeditated first degree murder, since the majority of society falls under the prophesy, Jesus Christ gave in (Matthew 7:21-23)'Niv'

21"Not everyone who says to me, 'Lord-Lord' will enter the kingdom of heaven, but only the one who does the will of my Father who is in heaver. 22Many will say to me on that day 'Lord, Lord', did we not prophesy in your name and in your name drive out demons and in your name perform many miracles? 23Then I will tell them plainly 'I never knew you. Away from me you evildoers!'
In this prophesy Jesus Christ is saying society on a whole has conformed to this world as they failed to rightly divide the word of truth to show themselves approved of God. Instead, society blindly conforms to the rulers of this world doing their will as their actions show they know not the Spirit of Truth or they would not have condoned the act of premeditated murder fulfilling yet another prophesy Jesus gave in (Matthew 25:41-46) 'NIV'
41Then he will say to those on his left, 'Depart from me, you who are cursed, into the eternal fire prepared for the devil and his angels. 42For I was hungry and you gave me nothing to eat. I was thirsty and you gave me nothing to drink, 43I was a stranger and you did not invited me in, I needed clothes and you did not clothe me, I was sick and in prison and you did not look after me.'
44"They also will answer, 'Lord, when did we see you hungry or thirsty or a stranger or needing clothes or sick or in prison, and did not help you?
45"He will reply, 'Truly I tell you, whatever you did not do for one of the least of these, you did not do for me.'
46"Then they will go away to eternal punishment, but the righteous to eternal life."
Jesus also repeatedly prophesied he would be killed and he was! Jesus died a gruesome death in the flesh and when he later appeared to his disciples, he rebuked them for their failure to understand he lived through the eternal Spirit of God his Father and not the flesh of which all of this world are born into. Afterwards, the disciples began to boldly minister repentance in the shedding of Jesus' blood on the cross and in the wisdom of Gods grace, in giving Jesus' pre-eminence over the world to forgive those who come to the realization it was their sinful nature that nailed Jesus to the cross and seek his forgiveness. Something Satan, the god of this world does not want to happen. (Acts 5:27-31)'NIV'
27The apostles were brought in and made to appear before the Sanhedrin to be questioned by the high priest. 28"We gave you strict orders not to teach in this name," he said. "Yet you have filled Jerusalem with your teaching and are determined to make us guilty of this man's blood."
29Peter and the other apostles replied: "We must obey God rather than human beings! 30The God of our ancestors raised Jesus from the dead - whom you killed by hanging him on a cross. 31God exalted him to his own right hand as Prince and Savior that he might bring Israel to repentance and forgive their sins. 32We are witnesses of these things, and so is the Holy Spirit, whom God has given to those who obey him."
It is at this time the disciples began witnessing of the many who only profess to know Jesus, by straying from the Spirit of Truth in order to prosper and receive the praise and rewards of this world. While the disciples would be persecuted by the many who minister a false salvation free from any guilt in the shedding of Jesus' blood on the cross. Never knowing until it is to late how Satan deceived them through his ministry in the false light of Christ, into accepting a false salvation which does not admit to the guilt in the shedding of Jesus' blood on the cross. Just like those who immorally committed the premeditated murder on August 24, 2017, when they appeased the world ferocious appetite to shed blood as a sin offering and refuse to accept their actions as immoral, like they do in the shedding of Jesus' blood on the cross... It is no coincidence the gurney Florida committed their premeditated cold blooded murder on is shaped like a cross...

Florida's corrupt legal system has scheduled another premeditated cold blooded murder for October 5, 2017. So now I ask who is serving God; Those who support executions or those who oppose them?
(1 Corinthians 1:10) 'NIV'
10I appeal to you, brothers and sisters in the Name of our Lord Jesus Christ, that all of you agree with one another in what you say and that there be no divisions among you, but that you be perfectly united in mind and thought.
This is an interesting question, if both sides profess to know God and call themselves Christian it means God's house is divided!
Here is a clue to the correct answer. The fear of the Lord is the beginning of wisdom. God showed this world the wisdom of his grace after it had killed his son...

Hello Milo
Well, here we are on your blog and it seems that correspondence between us has a very similar vein to others and I'm just going to sit with that for a while.
Love and light
H
(scanned reply – view as blog post)
uploaded Dec. 7, 2017.  Original (PDF) 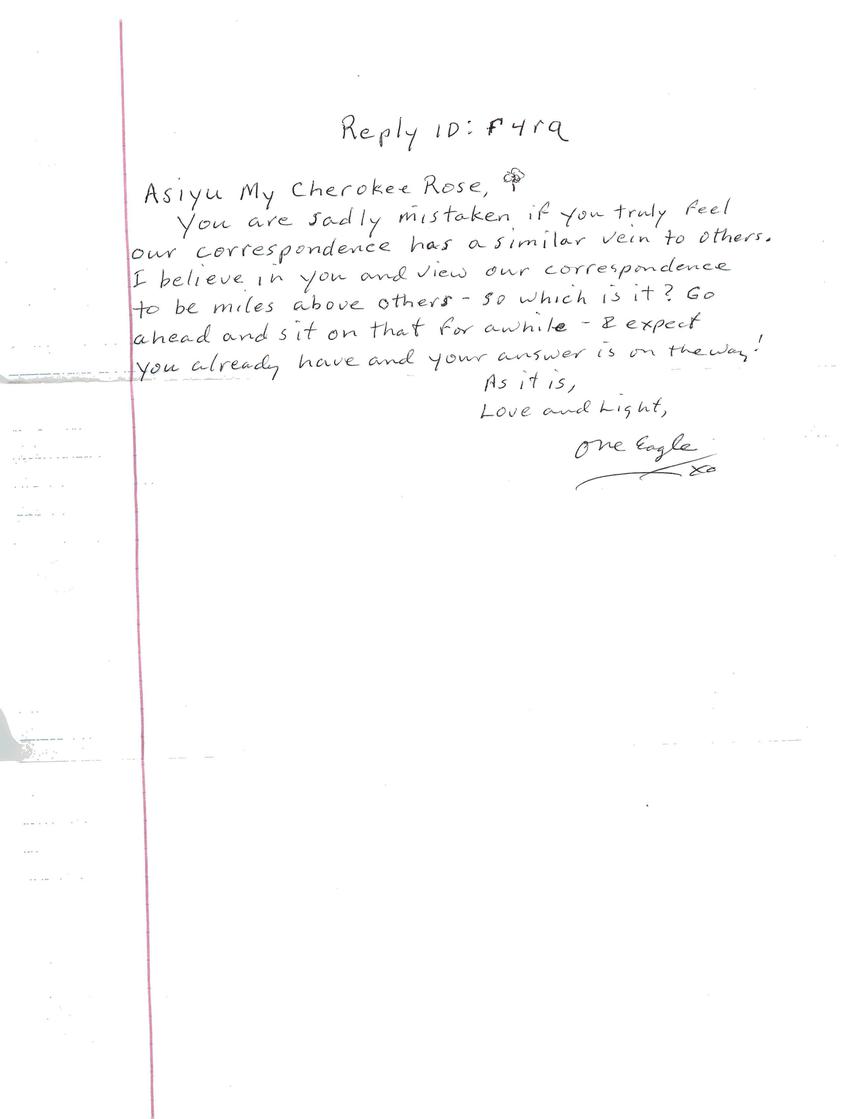