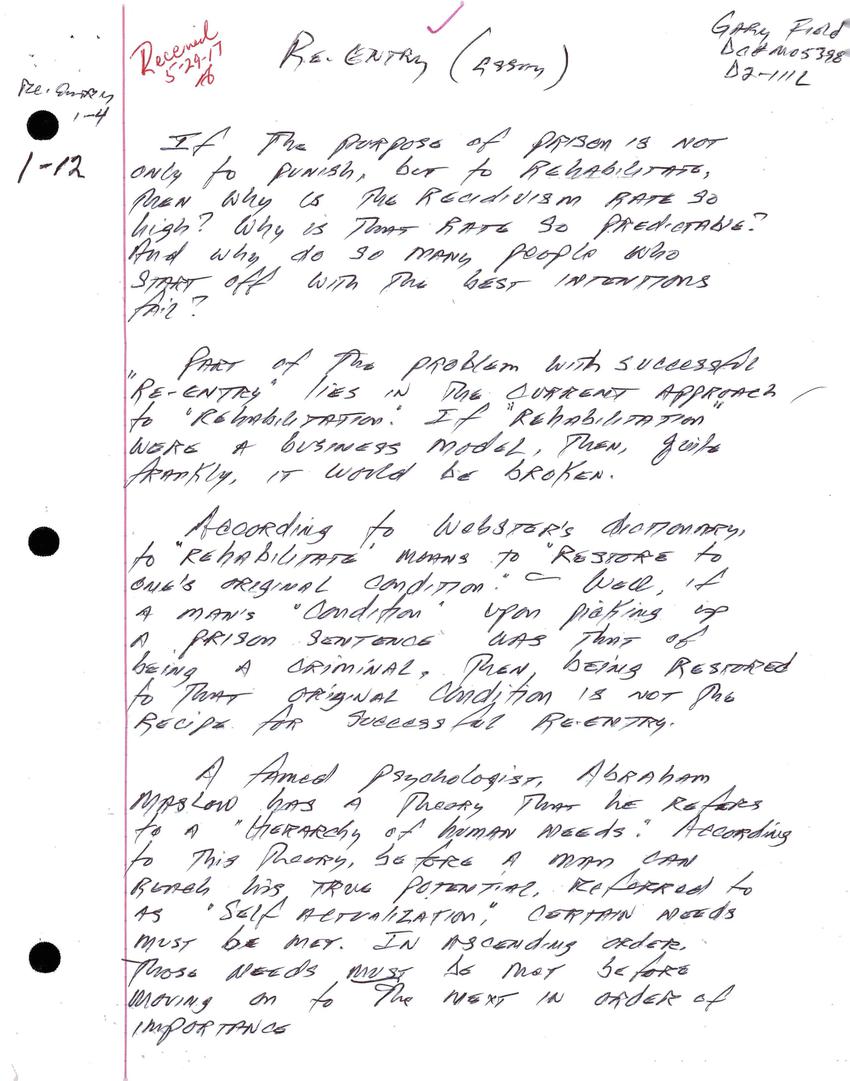 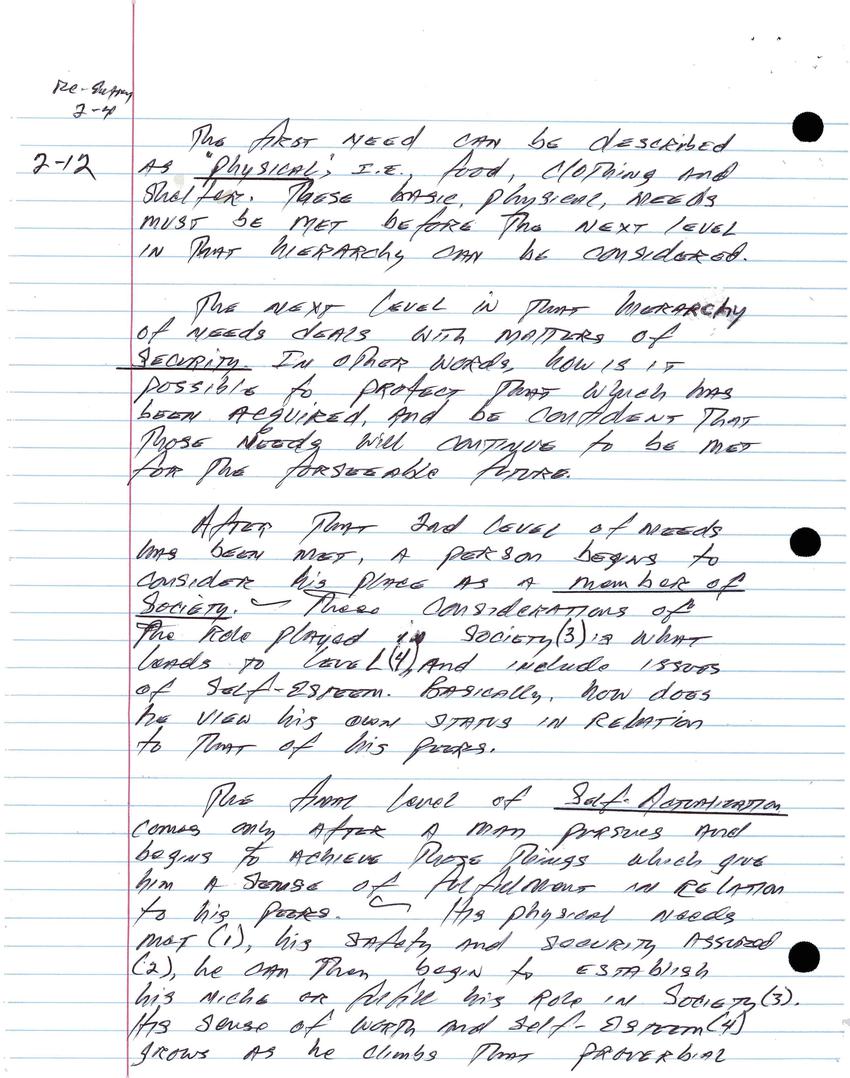 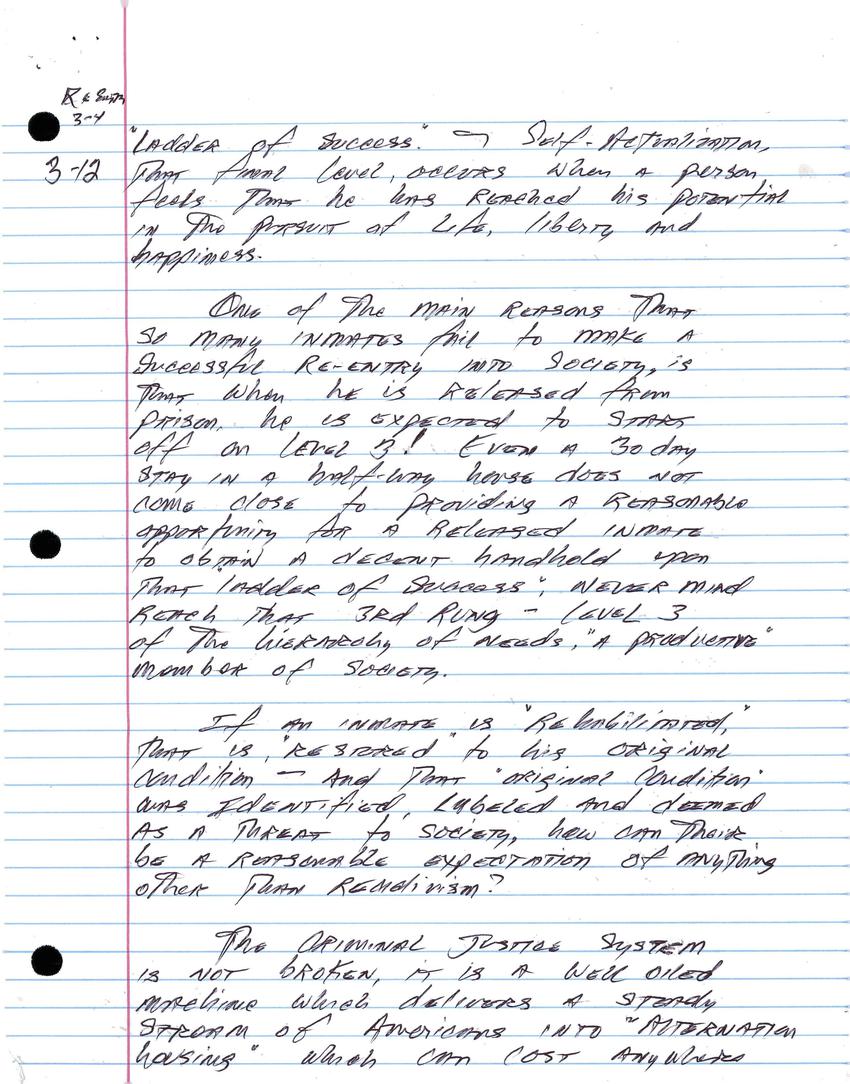 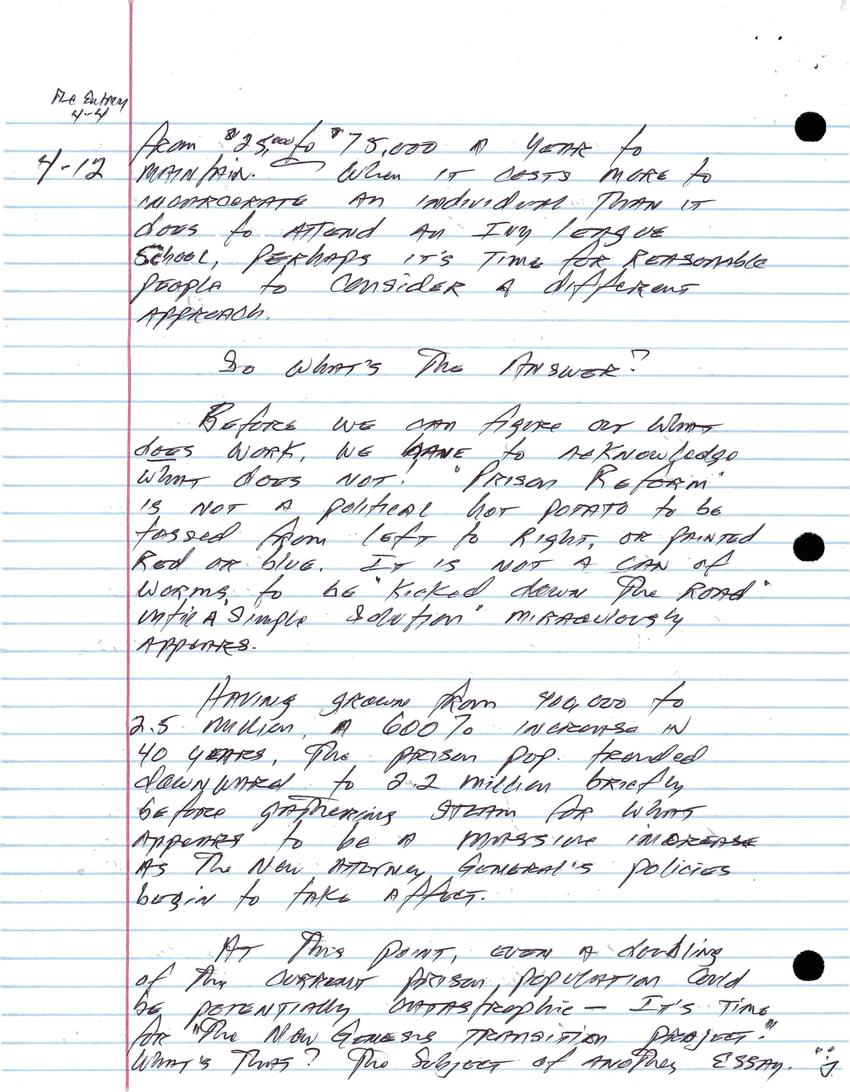 If the purpose of prison is not only to punish, but to rehabilitate, then why is the recidivism rate so high? Why is this rate so predictable And why do so many people who start off with the best intentions fair?

Part of the problem with successful "Re-Entry" lies in the current approach to "Rehabilitation." If "Rehabilitation" were a business model, then, quite frankly, it would be broken.

According to Webster's dictionary, to "Rehabilitate" means to "restore to one's original condition." Well, if a man's "condition" upon picking up a prison sentence was that of being a criminal. Then, being restored to that original condition is not the recipe for successful Re-Entry.

The first need can be described as "physical," i.e., food, clothing and shelter. These basic, physical, needs must be met before the next level in that hierarchy can be considered. The next level in that hierarchy of needs deals with matters of security. In other words, how is it possible to protect that which has been required, and be confident that those needs will continue to be met for the foreseeable future.

After that and level of needs has been met, a person begins to consider his place as a member of society. These considerations of the role played in society (3) is bonds to level (4), and include issues of self-esteem. Basically, how does he view his own _____ in relation to that of his peers.

The final level of Self-Actualization comes only after a man pursues and begins to achieve these things which give him a sense of __________ in relation to his peers. This physical needs mat (1), his safety and security assured (2), he can then begin to establish his niche or fulfil his role in society (3). This sense of worth and self-esteem (4) grows as he climbs that proverbial "ladder of success." Self-Actualization, that final level, occurs when a person feels that he has reached his potential in the pursuit of life, liberty, and happiness.

One of the main reasons that so many inmates fail to make a successful re-entry into society, is that when he is released from prison, he is expected to start off on level 3! Even a 30 day stay in a half-way house doe snot come close to providing a reasonable opportunity for a released inmate to obtain a decent handhold upon that ladder of success", nevermind reach that 3rd rung - level 3 of the hierarchy of needs, "a productive" member of society.

If an inmate is "rehabilitated," that is, "restored" to his original condition - and that original condition was identified, labeled and deemed as a threat to society, how can their be a reasonable expectation of anything other than recidivism?

The Criminal Justice System is not broken, it is a well oiled machine which delivers a steady stream of Americans into "Alternation housing" which can cost anywhere from $25,000 to $75,000 a year to maintain. When it costs more to incarnate an individual than it does to attend an Ivy league school, perhaps its time for reasonable people to consider a different approach.

So what's the Answer?

Before we can figure out what does work, we have to acknowledge what does not! "Prison Reform" is not a political hot potato to be tossed from left to right, or printed red or blue. It is not a can of worms to be "kicked down the road" until a simple solution miraculously appears.

Having grown from 400,000 to 2.5 million, a 600% increase in 40 years. The prison population trended downward to 2.2 million briefly before gatherings steam for what appears to be a massive increase as the now Attorney General's policies begin to take affect.

At this point, even a doubling of the current prison population could be potentially catastrophic - It's time for "the now geneses transition project." What's that? The subject of another essay. :D

Thanks for writing! I finished the transcription for your post. I really enjoyed your message especially when it came to the "hot potato" of red versus blue. I feel like this really is accurate when looking at today's society. We haven't been able to make any real changes because we care more about a party compared to the people that are effected by the decisions that we make.