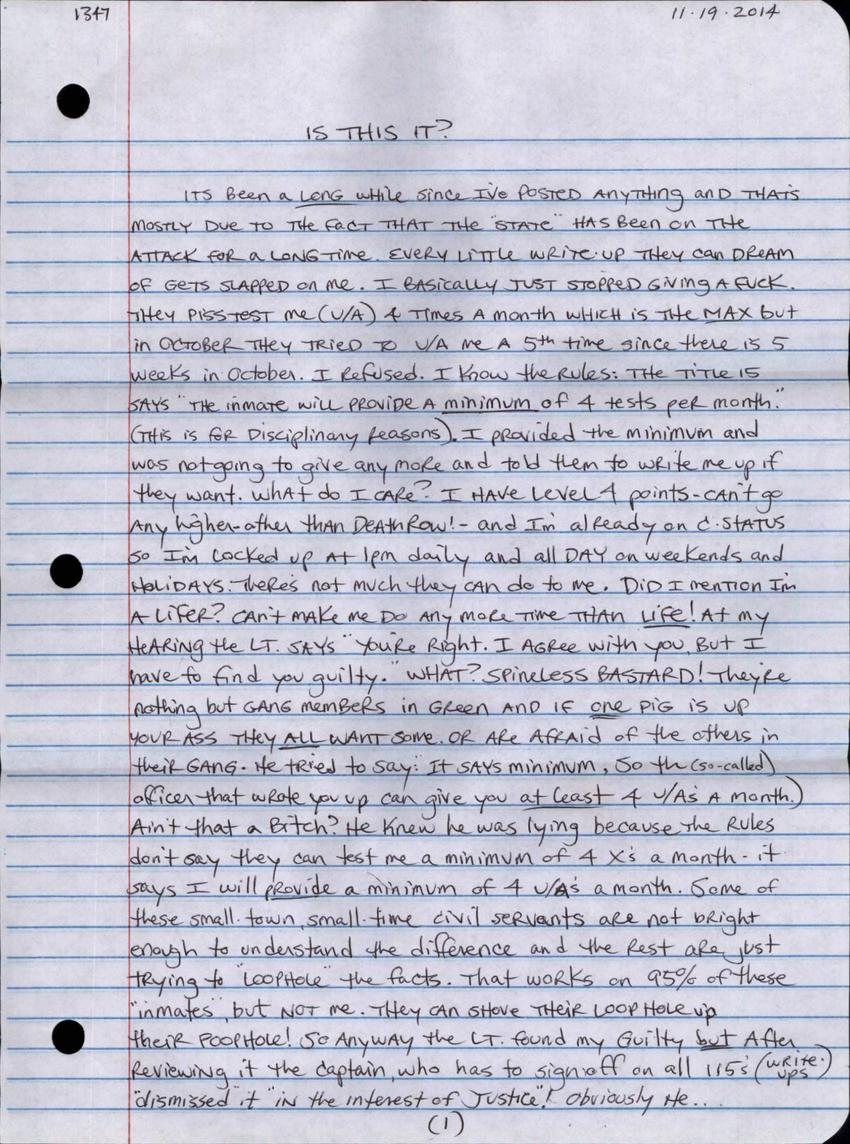 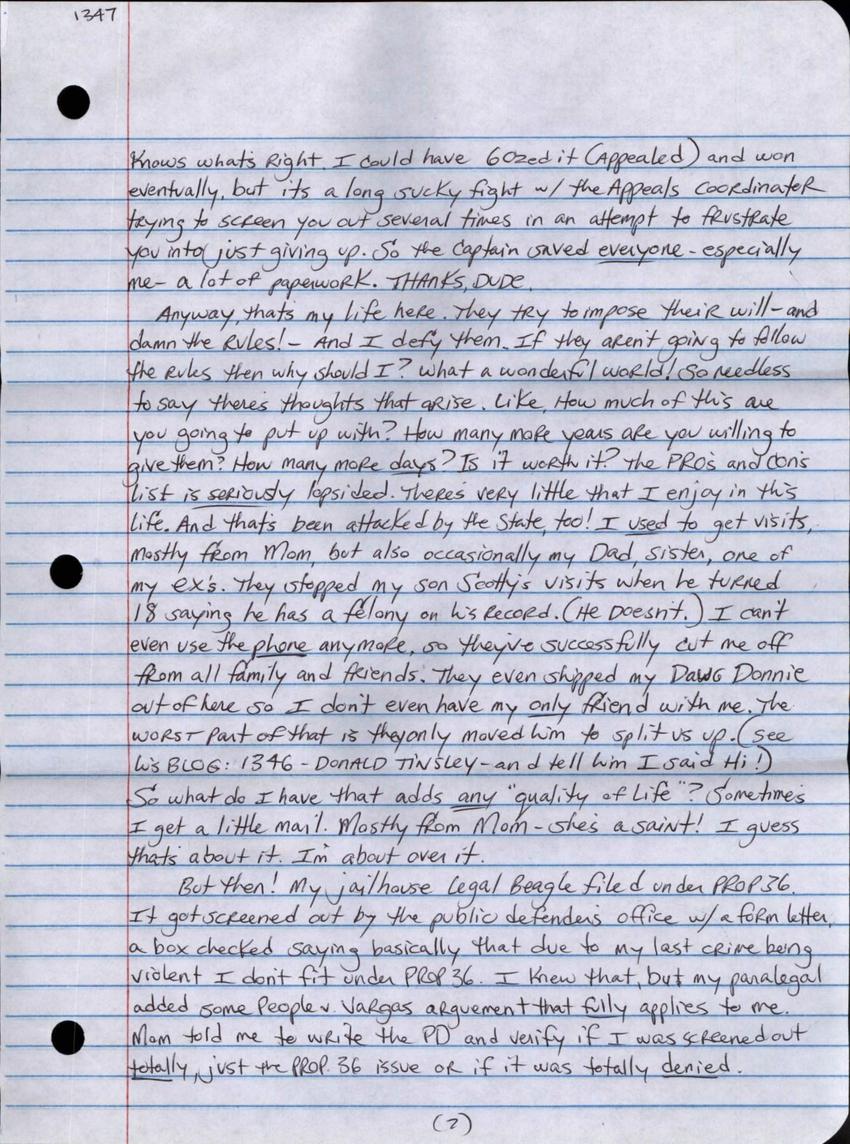 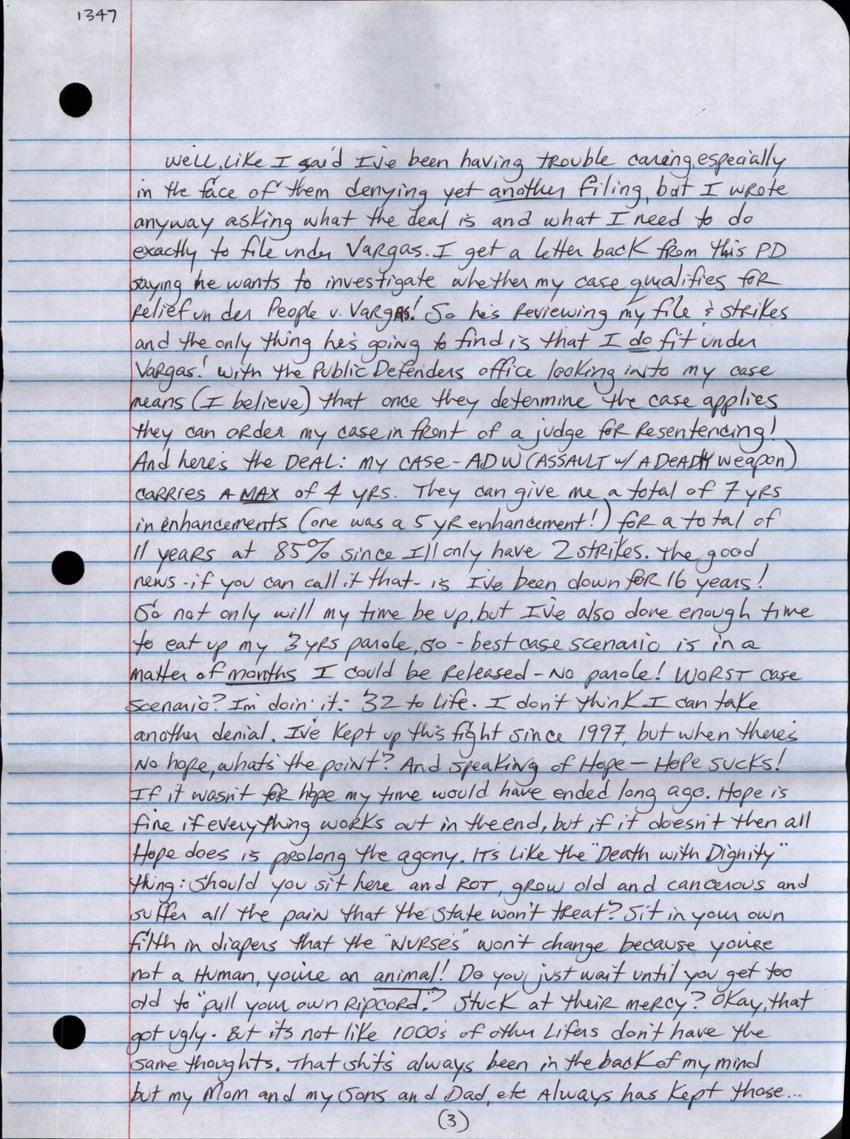 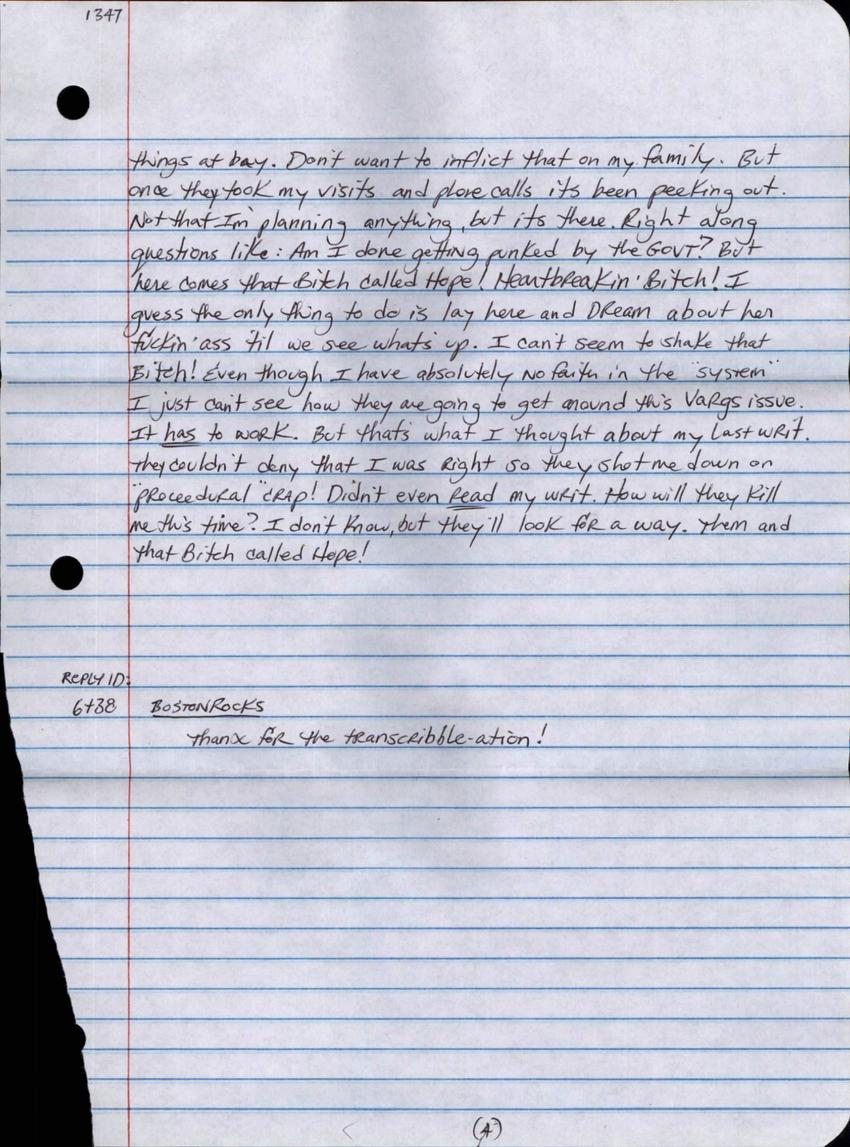 It's been a long while since I've posted anything and that's mostly due to the fact that the "state" has been on the attack for a long time. Every little write up they can dream of gets slapped on me. I basically just stopped giving a fuck. They piss test me (U/A) 4 times a month which is the max but in October they tried to V/A me a 5th time since there is 5 weeks in October. I refused. I know the rules: The title 15 says "the inmate will provide a minimum of 4 tests per month." (This is for disciplinary reasons.) I provided the minimum and was not going to give any more and told them to write me up if they want. What do I care? I have level 4 points. Can't go any higher other than death row! And I'm already on C Status so I'm locked up at 1pm daily and all day on weekends and holidays. There's not much they can do to me. Did I mention I'm a lifer? Can't make me do any more time than life! At my hearing the lieutenant says, "You're right. I agree with you, but I have to find you guilty." What? Spineless bastard! They're nothing but gang members in green and if one pig is up your ass they all want some or are afraid of the others in their gang. He tried to say, "It's a minimum, so the (so-called) officer that wrote you up can give you at least 4 V/As a month. Ain't that a bitch? He knew he was lying because the rules don't say they can test me a minimum of 4 times a month. It says I will provide a minimum of 4 V/As a month. Some of these small town, small time civil servants are not bright enough to understand the difference and the rest are just trying to "loophole" the facts. That works on 95% of these "inmates", but not me. They can shove their loophole up their loophole! So anyway the lieutenant found me guilty but after reviewing it the captain, who has to sign off on all 115s (write-ups) "dismissed" it "in the interest of justice"! Obviously he knows what's right. I could have 602ed it (appealed) and won eventually, but it's a long sucky fight with the appeals coordinator trying to screen you out several times in an attempt to frustrate you into just giving up. So the captain saved everyone--especially me--a lot of paperwork. Thanks, dude.

Anyway, that's my life here. They try to impose their will--and damn the rules! And I defy them. If they aren't going to follow the rules then why should I? What a wonderful world! So needless to say there's thoughts that arise, like, how much of this are you going to put up with? How many more years are you willing to give them? How many more days? Is it worth it? The pros and cons list is seriously lopsided. There's very little that I enjoy in this life. And that's been attacked by the state too! I used to get visits, mostly from Mom, but also occasionally my Dad, sister, one of my ex's. They stopped my son Scotty's visits when he turned 18 saying he has a felony on his record. (He doesn't.) I can't even use the phone anymore so they've successfully cut me off from all family and friends. They even shipped my dawg, Donnie, out of here so I don't even have my only friend with me. The worst part of that is they only moved him to split us up. (See his blog: 1346--Donald Tinsley--and tell him I said Hi!) So what do I have that adds any "quality of life"? Sometimes I get a little mail. Mostly from Mom--she's a saint! I guess that's about it. I'm about over it.

But then! My jailhouse legal be able filed under Prop 36, it got screened out by the public defender's office with a form letter, a box checked saying basically that due to my last crime being violent I don't fit under Prop 36. I knew that, but my paralegal added some People v. Vargas argument that fully applies to me. Mom told me to write the PD and verify if I was screened out totally, just the Prop 36 issue or if it was totally denied.

Well, Iike I said, I've been having trouble caring, especially in the face of them denying yet another filing, but I wrote anyway asking what the deal is and what I need to do exactly to file under Vargas. I get a letter back from this PD saying he wants to investigate whether my case qualifies for relief under People v. Vargas! So he's reviewing my file and strikes and the only thing he's going to find is that I do fit under Vargas! With the public defender's office looking into my case means (I believe) that once they determine the case applies they can order my tase in front of a judge for re-sentencing! And here's the deal: my case ADW (assault with a deadly weapon) carries a max of 4 years. They can give me a total of 7 years in enhancements (one was a 5 year enhancement!) for a total of 11 years at 85% since I'll only have 2 strikes. The good news--if you can call it that--is I've been down for 16 years! So not only will my time be up, but I've also done enough time to eat up my 3 years parole, so--best case scenario is in a matter of months I could be released--no parole! Worst case scenario? I'm doin' it. 32 to life. I don't think I can take another denial. I've kept up this fight since 1997, but when there's no hope, what's the point? And speaking of hope--hope sucks! If it wasn't for hope my time would have ended long ago. Hope is fine if everything works out in the end, but if it doesn't then all hope does is prolong the agony. It's like the "death with dignity" thing: should you sit here and rot, grow old and cancerous and suffer all the pain that the state won't treat? Sit in your own filth in diapers that the "nurses" won't change because you're not a human, you're an animal! Do you just wait until you get too old to "pull your own ripcord"? Stuck at their mercy? Okay, that got ugly. But it's not like thousands of other lifers don't have the same thoughts. That shit's always been in the back of my mind but my mom and my sons and dad, etc always have kept those things at bay. Don't want to inflict that on my family, but once they took my visits and phone calls it's been peeking out. Not that Im planning anything, but it's there. Right alone questions like: Am I done getting punched by the government? But here comes that bitch called hope! Heartbreakin' bitch! I guess the only thing to do is lay here and dream about her fuckin' ass till we see what's up. I can't seem to shake that bitch! Even though I have absolutely no faith in the "system" I just can't see how they are going to get around this Vargas issue. It has to work, but that's what I thought about my last writ. They couldn't deny that I was right so they shot me down on "procedural" crap! Didn't even read my writ. How will they kill me this time. I don't know but they'll look for a way. Then and that Bitch called Hope!

Thanks for the story
Hi Scot,
just read your last post, is there any news to your case? I hope it works out as well as you can find a way to deal with this situation. Fingers crossed. Julia
Hi Scot,
Sorry it's been so long. I have so many letters I started and never finished. Now my house is just coming back from a major shamble and I'm getting with it. Just wanted to let you to know I'm thinking of you. I still have one stamp left, reserved for you, when I find where the envelopes are, very soon.
Hi there Scot!
I don't know if you get this, you haven't been posting anything for a long time - but I just wanted to say hi from your friend Donnie, he asked me to. So, hello!! :-)
And I just have to say that you have some spectacular art work - it's pretty amazing stuff!
Well, hope you're ok.

Wrote another transcription today. Keep writing. I know you don't like to get too much into it in our letters, but I think it's important to get your story out there.