The Lee Correctional Massacre: 7 Dead And 22 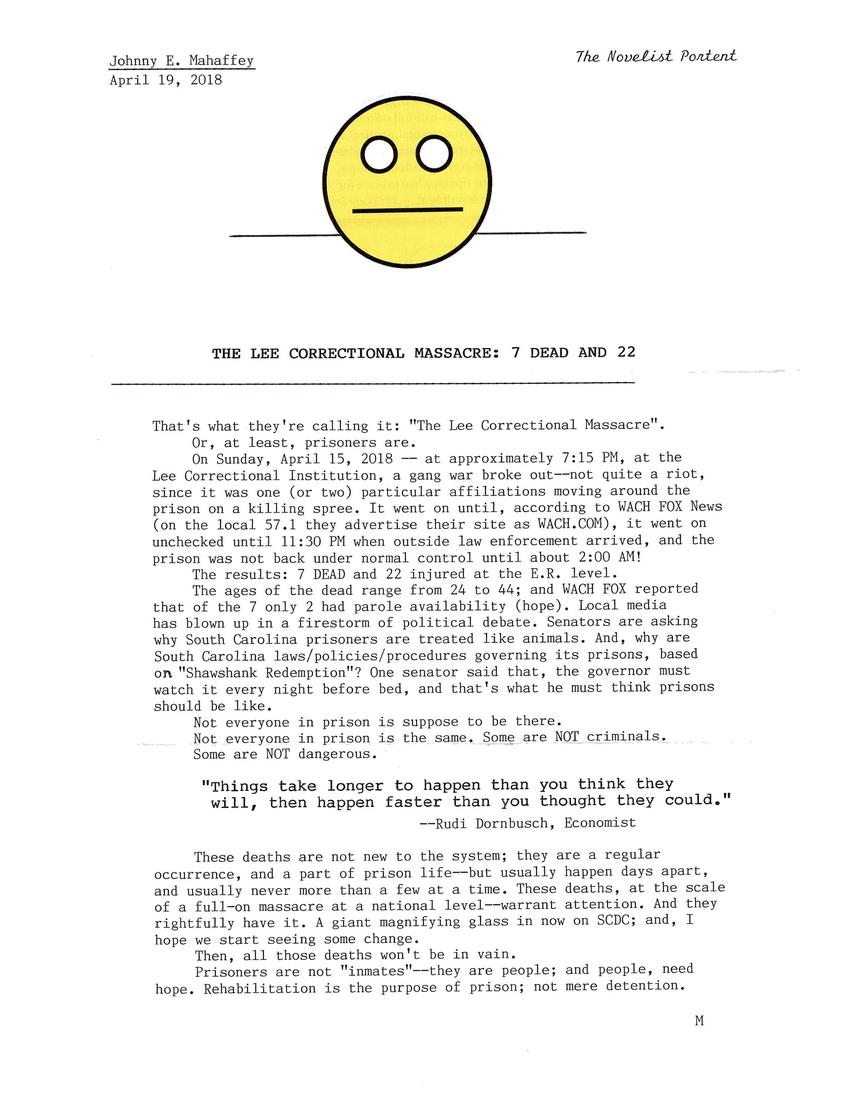 THE LEE CORRECTIONAL MASSACRE: 7 DEAD AND 22

That's what they're calling it: "The Lee Correctional Massacre".
Or, at least, prisoners are.
On Sunday, April 15, 2018 -- at approximately 7:15 PM, at the Lee Correctional Institution, a gang war broke out -- not quite a riot, since it was one (or two) particular affiliations moving around the prison on a killing spree. It went on until, according to WACH FOX News (on the local 57.1 they advertise their site as WACH.COM), it went on unchecked until 11:30 PM when outside law enforcement arrived, and the prison was not back under normal control until about 2:00 AM!
The results: 7 DEAD and 22 injured at the E.R. level.
The ages of the dead range from 24 to 44; and WACH FOX reported that of the 7 only 2 had parole availability (hope). Local media has blown up in a firestorm of political debate. Senators are asking why South Carolina prisoners are treated like animals. And, why are South Carolina laws/policies/procedures governing its prisons, based on "Shawshank Redemption"? One senator said that, the governor must watch it every night before bed, and that's what he must think prisoners should be like.
Not everyone in prison is suppose to be there.
Not everyone in prison is the same. Some are NOT criminals.
Some are NOT dangerous.

"Things take longer to happen than you think they will, then happen faster than you thought they could."
--Rudi Dornbusch, Economist

These deaths are not new to the system; they are a regular occurrence, and a part of prison life--but usually happen days apart, and usually never more than a few at a time. These deaths, at the scale of a full-on massacre at a national level -- warrant attention. And they rightfully have it. A giant magnifying glass in now on SCDC; and, I hope we start seeing some change.
Then, all those deaths won't be in vain.
Prisoners are not "inmates" -- they are people; and people, need hope. Rehabilitation is the purpose of prison; not mere detention.