How To End Premeditated Gun Violence Once And For All 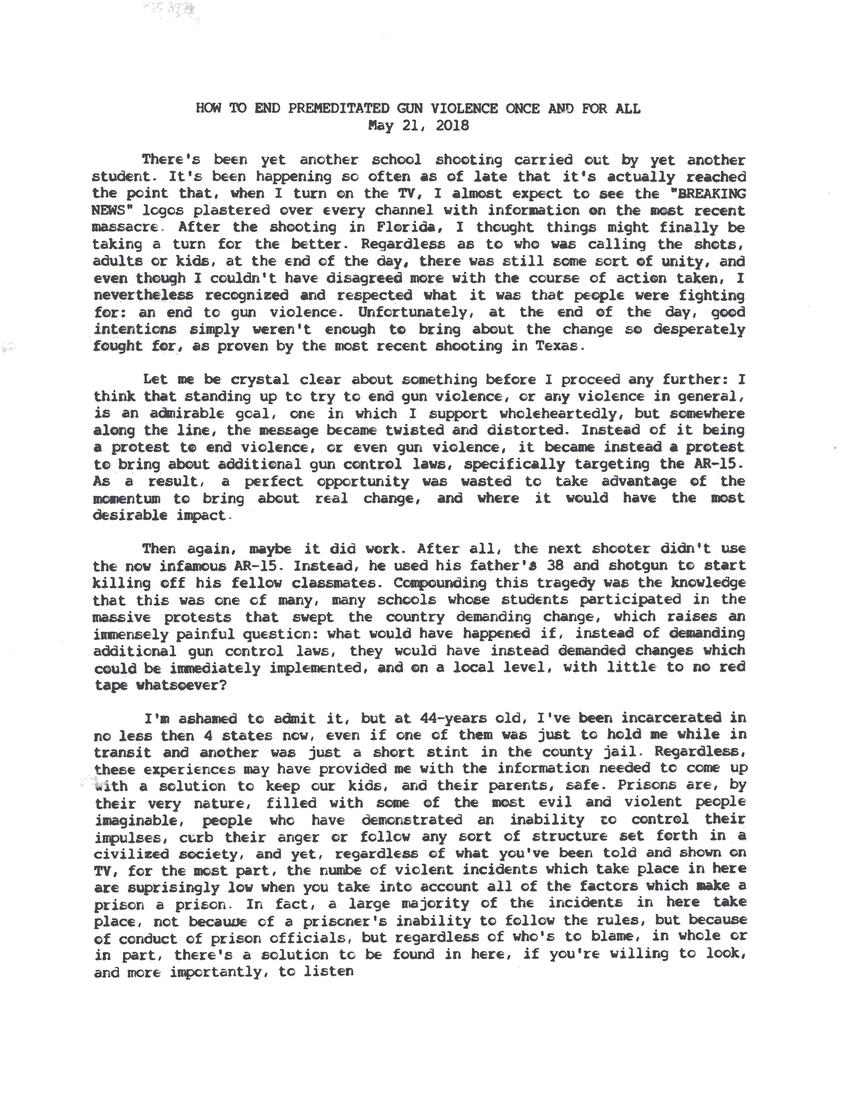 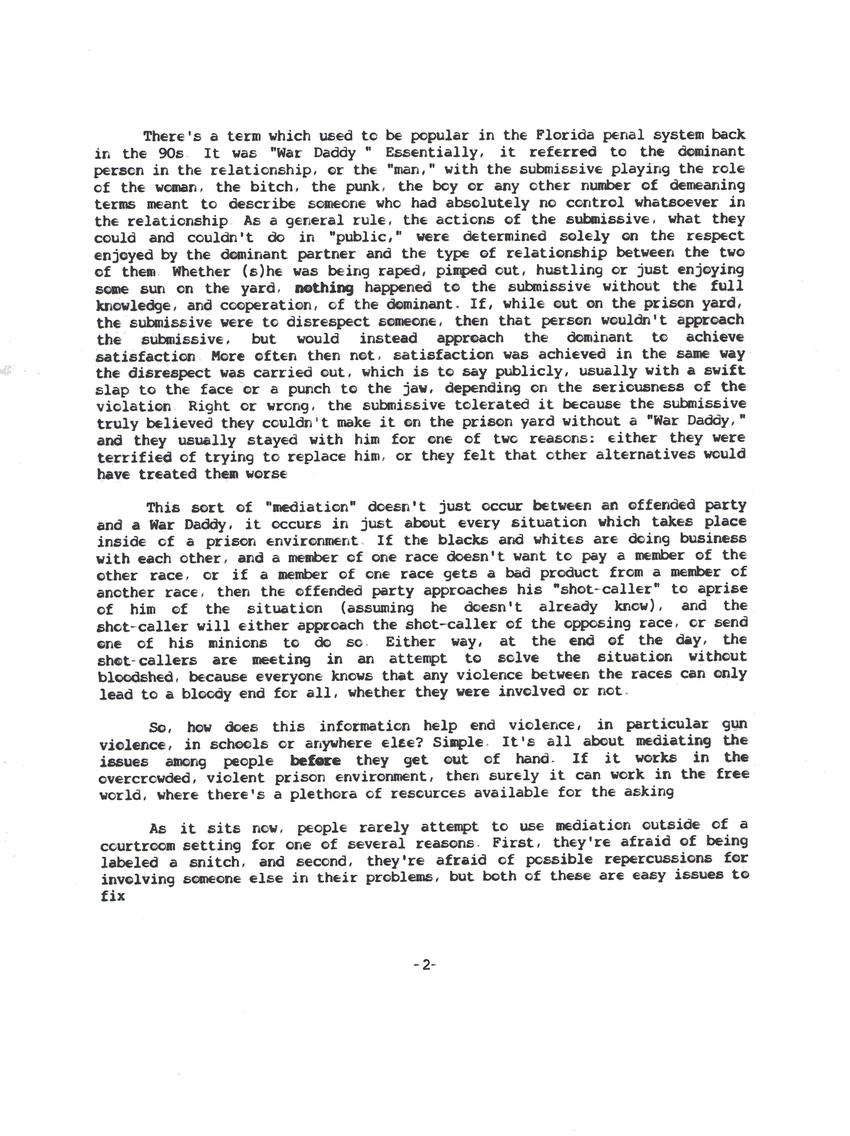 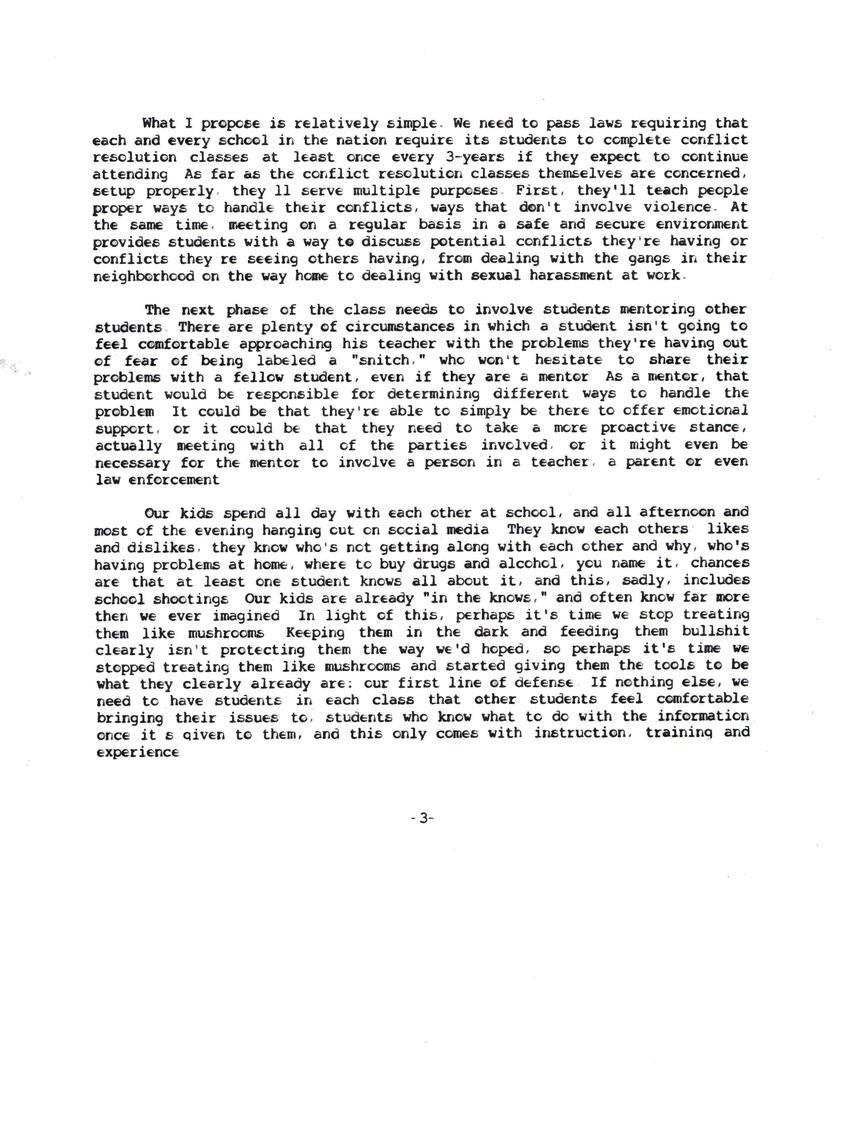 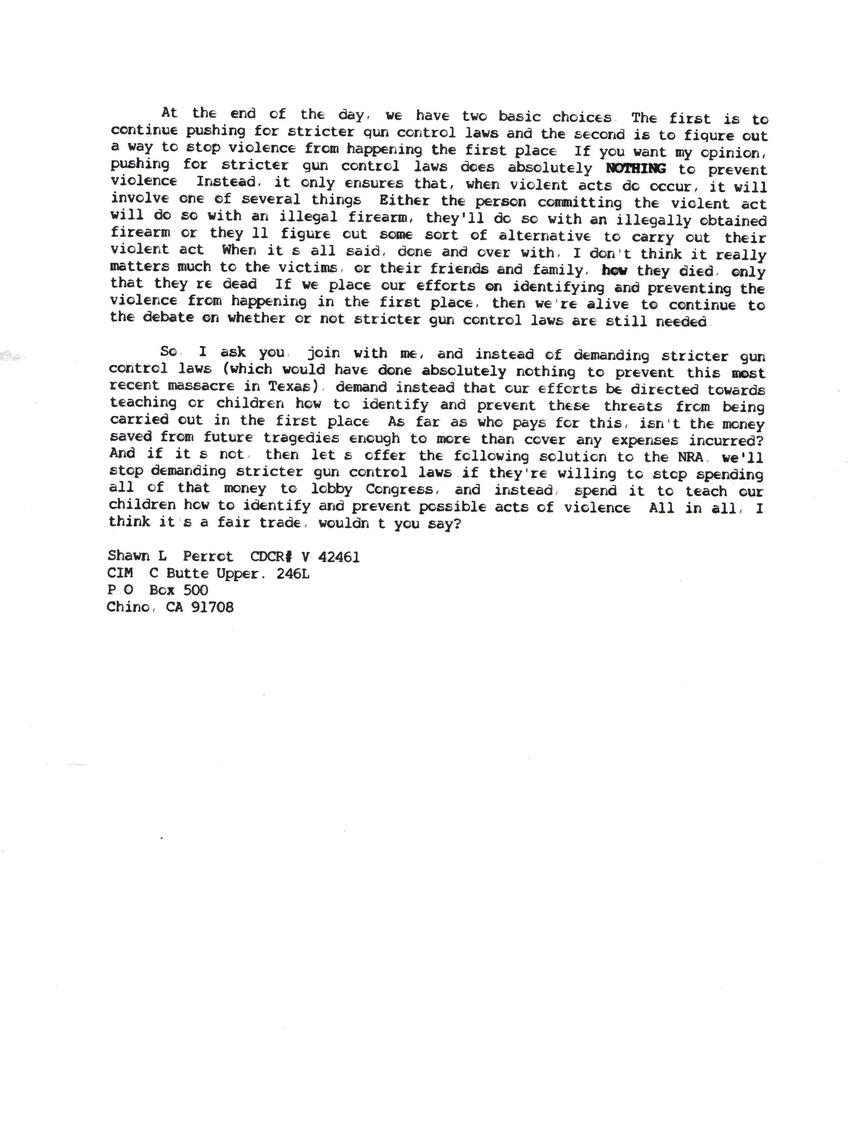 HOW TO END PREMEDITATED GUN VIOLENCE ONCE AND FOR ALL
May 21, 2018

There's been yet another school shooting carried out by yet another student. It's been happening so often as of late that it's actually reached the point that, when I turn on the TV, I almost expect to see the "BREAKING NEWS" logos plastered over every channel with information on the most recent massacre. After the shooting in Florida, I thought things might finally be taking a turn for the better. Regardless as to who was calling the shots, adults or kids, at the end of the day, there was still some sort of unity, and even though I couldn't have disagreed more with the course of action taken, I nevertheless recognized and respected what it was that people were fighting for: an end to gun violence. Unfortunately, at the end of the day, good intentions simply weren't enough to bring about the change so desperately fought for, as proven by the most recent shooting in Texas.

Let me be crystal clear about something before I proceed any further: I think that standing up to try to end gun violence, or any violence in general, is an admirable goal, one in which I support wholeheartedly, but somewhere along the line, the message became twisted and distorted. Instead of it being a protest to end violence, or even gun violence, it became instead a protest to bring about additional gun control laws, specifically targeting the AR-15. As a result, a perfect opportunity was wasted to take advantage of the momentum to bring about real change, and where it would have the most desirable impact.

Then again, maybe it did work. After all, the next shooter didn't use the now infamous AR-15. Instead, he used his father's 38 and shotgun to start killing off his fellow classmates. Compounding this tragedy was the knowledge that this was one of many, many schools whose students participated in the massive protests that swept the country demanding change, which raises an immensely painful question: what would have happened if, instead of demanding additional gun control laws, they would have instead demanded changes which could be immediately implemented, and on a local level, with little to no red tape whatsoever?

I'm ashamed to admit it, but at 44-years old, I've been incarcerated in no less than 4 states now, even if one of them was just to hold me while in transit and another was just a short stint in the county jail. Regardless, these experiences may have provided me with the information needed to come up with a solution to keep our kids, and their parents, safe. Prisons are, by their very nature, filled with some of the most evil and violent people imaginable, people who have demonstrated an inability to control their impulses, curb their anger or follow any sort of structure set forth in a civilized society, and yet, regardless of what you've been told and shown on TV, for the most part, the number of violent incidents which take place in here are surprisingly low when you take into account all of the factors which make a prison a prison. In fact, a large majority of the incidents in here take place, not because of a prisoner's inability to follow the rules, but because of conduct of prison officials, but regardless of who's to blame, in whole or in part, there's a solution to be found in here, if you're willing to look, and more importantly, to listen

There's a term which used to be popular in the Florida penal system back in the 90s. It was "War Daddy". Essentially, it referred to the dominant person in the relationship, of the "man," with the submissive playing the role of the woman, the bitch, the punk, the boy or any other number of demeaning terms meant to describe someone who had absolutely no control whatsoever in the relationship. As a general rule, the actions of the submissive, what they could and couldn't do in "public," were determined solely on the respect enjoyed by the dominant partner and the type of relationship between the two of them. Whether (s)he was being raped, pimped out, hustling or just enjoying some sun on the yard, nothing happened to the submissive without the full knowledge, and cooperation, of the dominant. If, while out on the prison yard, the submissive were to disrespect someone, then that person wouldn't approach the submissive, but would instead approach the dominant to achieve satisfaction. More often than not, satisfaction was achieved in the same way the disrespect was carried out, which is to say publicly, usually with a swift slap to the face or a punch to the jaw, depending on the seriousness of the violation. Right or wrong, the submissive tolerated it because the submissive truly believed they couldn't make it on the prison yard without a "War Daddy," and they usually stayed with him for one of two reasons: either they were terrified of trying to replace him, or they felt that other alternatives would have treated them worse.

This sort of "mediation" doesn't just occur between an offended party and a War Daddy, it occurs in just about every situation which takes place inside of a prison environment. If the blacks and whites are doing business with each other, and a member of one race doesn't want to pay a member of the other race, or if a member of one race gets a bad product from a member of another race, then the offended party approaches his "shot-caller" to apprise of him of the situation (assuming he doesn't already know), and the shot-caller will either approach the shot-caller of the opposing race, or send one of his minions to do so. Either way, at the end of the day, the shot-callers are meeting in an attempt to solve the situation without bloodshed, because everyone knows that any violence between the races can only lead to a bloody end for all, whether they were involved or not.

So, how does this information help end violence, in particular gun violence, in schools or anywhere else? Simple. It's all about mediating the issues among people before they get out of hand. If it works in the overcrowded, violent prison environment, then surely it can work in the free world, where there's a plethora of resources available for the asking.

As it sits now, people rarely attempt to use mediation outside of a courtroom setting for one of several reasons. First, they're afraid of being labelled a snitch, and second, they're afraid of possible repercussions for involving someone else in their problems, but both of these are easy issues to fix.

What I propose is relatively simple. We need to pass laws requiring that each and every school in the nation require its student to complete conflict resolution classes at least once every 3-years if they expect to continue attending. As far as the conflict resolution classes themselves are concerned, setup properly, they'll serve multiple purposes. First, they'll teach people proper ways to handle their conflicts, ways that don't involve violence. At the same time, meeting on a regular basis in a safe and secure environment provides students with a way to discuss potential conflicts they're having or conflicts they're seeing others having, from dealing with the gangs in their neighbourhood on the way home to dealing with sexual harassment at work.

The next phase of the class needs to involve students mentoring other students. There are plenty of circumstances in which a student isn't going to feel comfortable approaching his teacher with the problems they're having out of fear of being labelled a "snitch," who won't hesitate to share their problems with a fellow student, even if they are a mentor. As a mentor, that student would be responsible for determining different ways to handle the problem. It could be that they're able to simply be there to offer emotional support or it could be that they need to take a more proactive stance, actually meeting with all of the parties involved, or it might even be necessary for the mentor to involve a person in a teacher, a parent or even law enforcement.

Our kids spend all day with each other at school, and all afternoon and most of the evening hanging out on social media. They know each others likes and dislikes, they know who's not getting along with each other and why, who's having problems at home, where to buy drugs and alcohol, you name it, chances are that at least one student knows all about it, and this, sadly, includes school shootings. Our kids are already "in the knows," and often know far more than we ever imagined. In light of this, perhaps it's time we stop treating them like mushrooms. Keeping them in the dark and feeding them bullshit clearly isn't protecting them the way we'd hoped, so perhaps it's time we stopped treating them like mushrooms and started giving them the tools to be what they clearly already are: our first line of defense. If nothing else, we need to have students in each class that other students feel comfortable bringing their issues to, students who know what to do with the information once it's given to them, and this only comes with instruction, training and experience.

At the end of the day, we have two basic choices. The first is to continue pushing for stricter gun control laws and the second is to figure out a way to stop violence from happening in the first place. If you want my opinion, pushing for stricter gun control laws does absolutely NOTHING to prevent violence. Instead, it only ensures that, when violent acts do occur, it will involve one of several things. Either the person committing the violent act will do so with an illegal firearm, they'll do so with an illegally obtained firearm or they'll figure out some sort of alternative to carry out their violent act. When it's all said, done and over with, I don't think it really matters much to the victims, or their friends and family, how they died, only that they are dead. If we place our efforts on identifying and preventing the violence from happening in the first place, then we're alive to continue to the debate on whether or not stricter gun control laws are still needed.

So, I ask you, join with me, and instead of demanding stricter gun control laws (which would have done absolutely nothing to prevent this most recent massacre in Texas), demand instead that our efforts be directed towards teaching our children how to identify and prevent these threats from being carried out in the first place. As far as who pays for this, isn't the money saved from future tragedies enough to more than cover any expenses incurred? And if it's not, then let's offer the following solution to the NRA, we'll stop demanding stricter gun control laws if they're willing to stop spending all of that money to lobby Congress, and instead, spend it to teach our children how to identify and prevent possible acts of violence. All in all, I think it's a fair trade, wouldn't you say?