The Liar and the Hoax 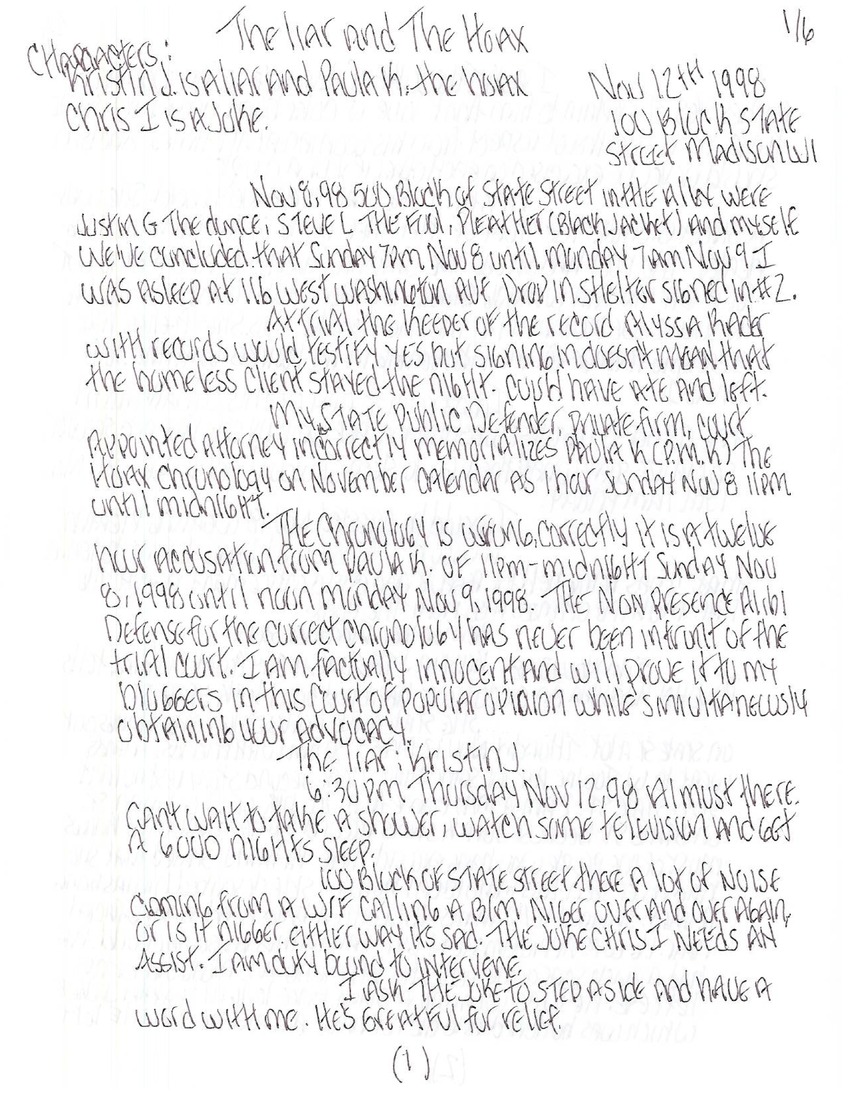 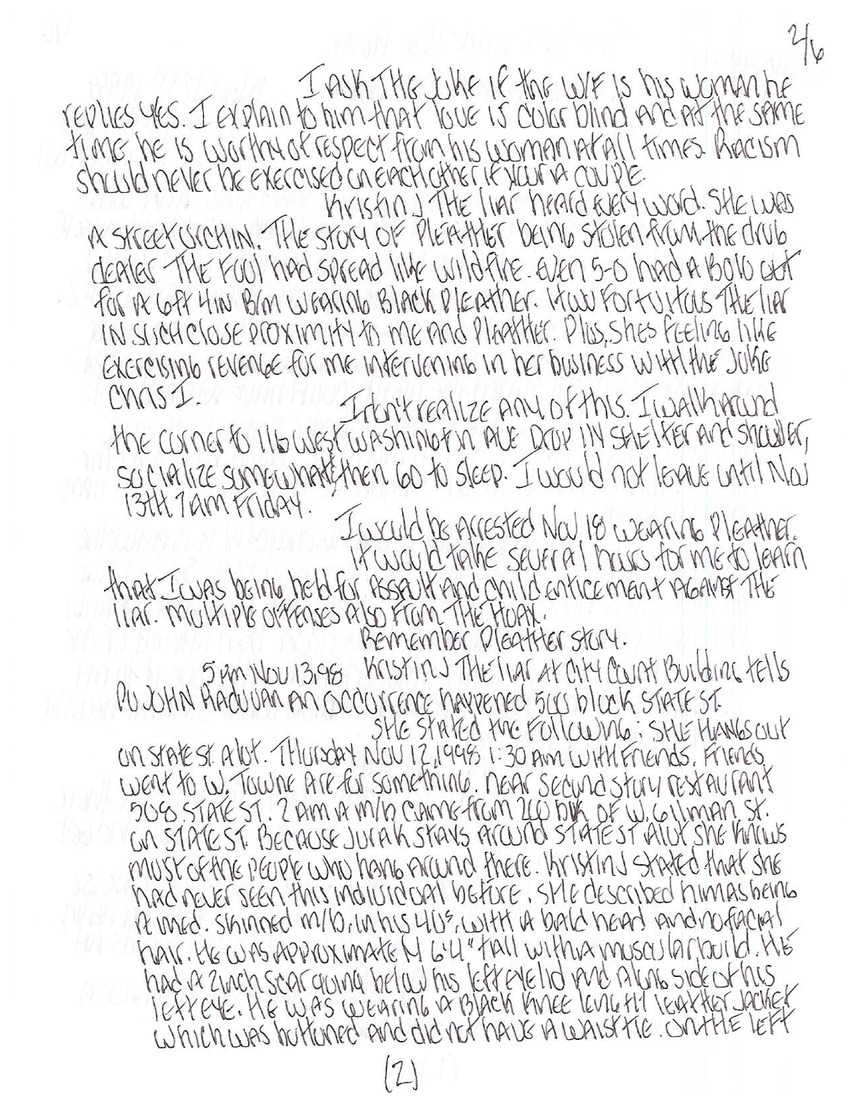 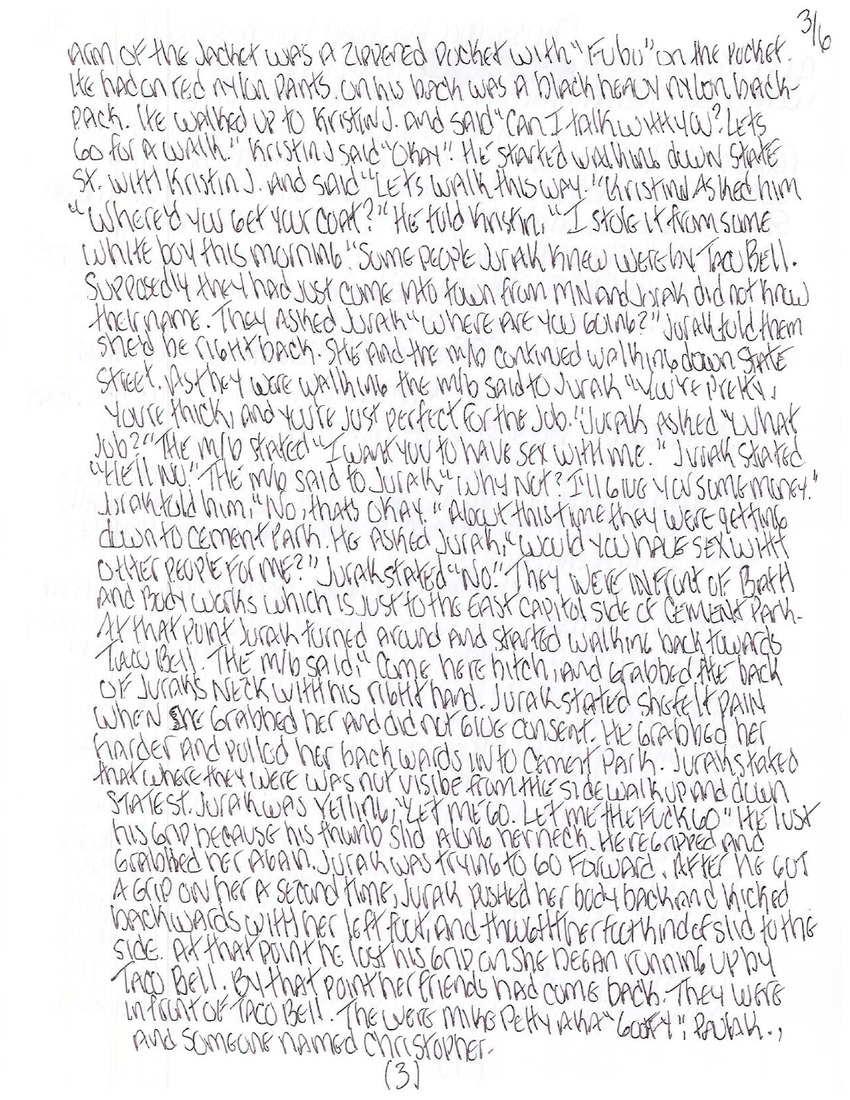 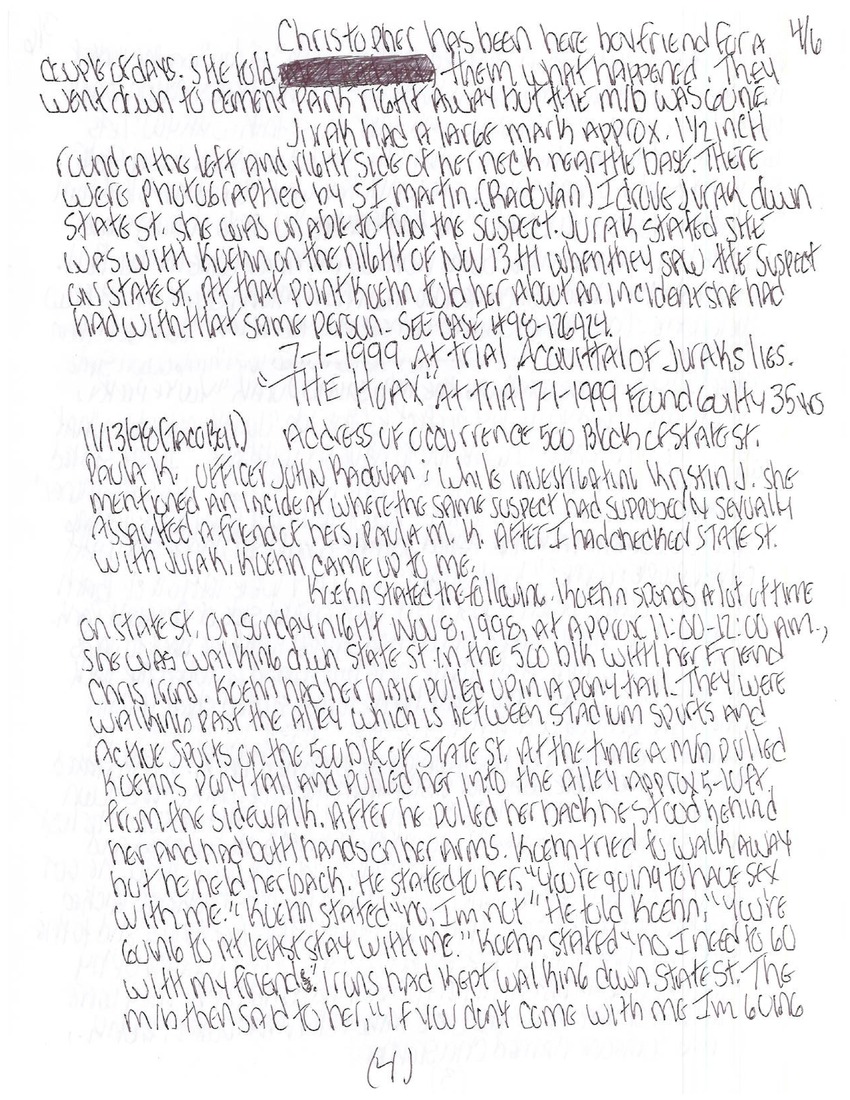 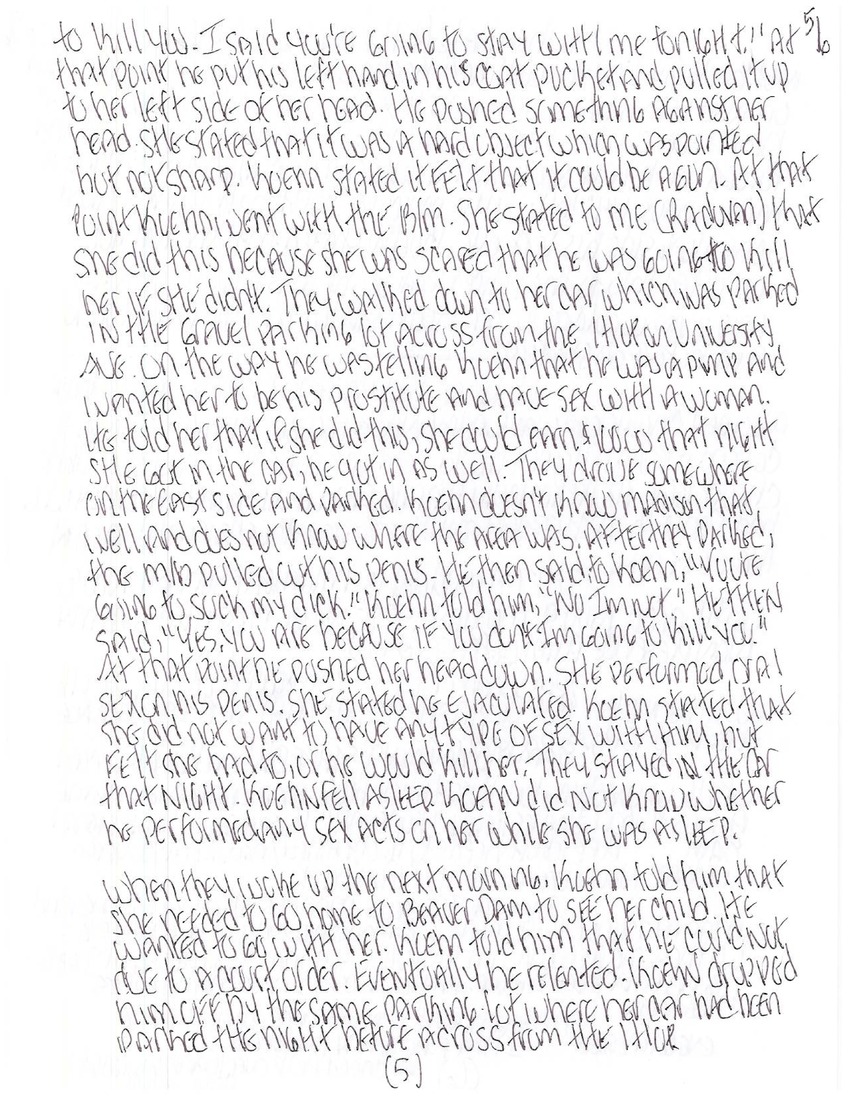 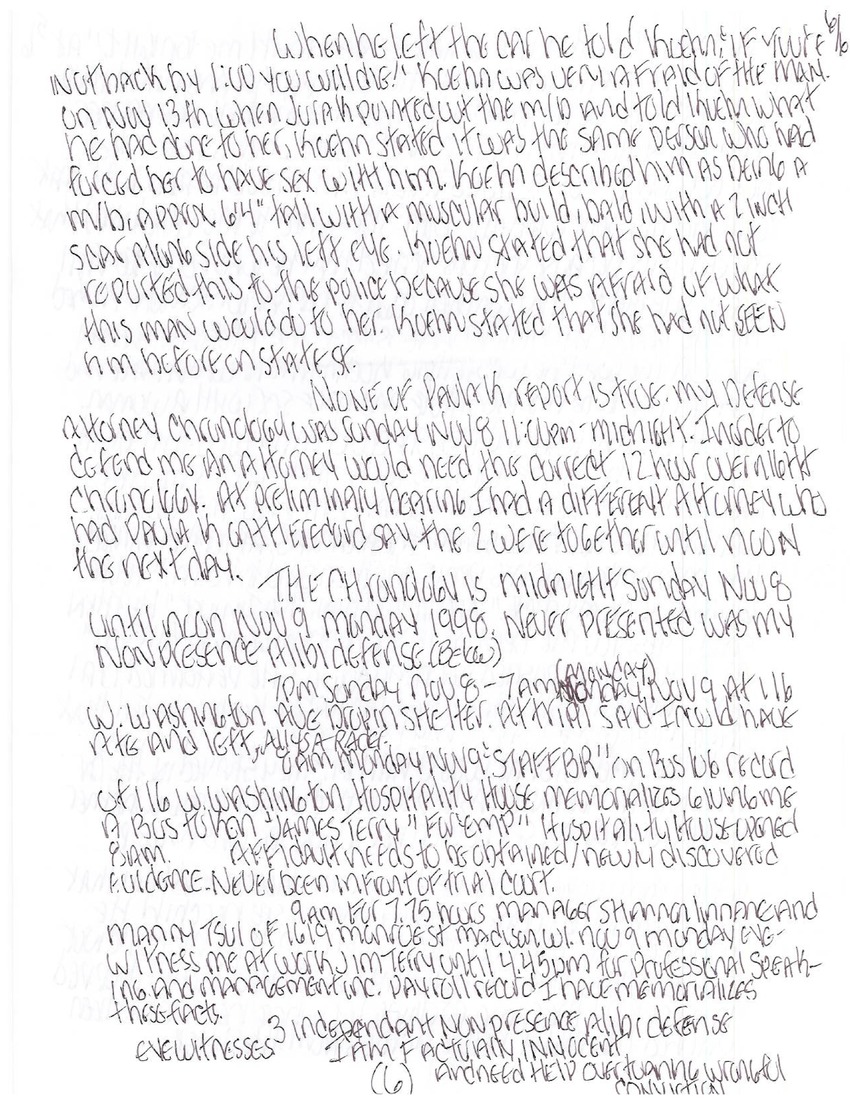 Characters: The liar and The Hoax 1/6
Kristin J. is a liar and Paula K. the hoax Nov 12th 1998
Chris I. is a joke. 100 Block State
Street Madison WI
Nov 8, 98 500 Block of State Street in the alley were
Justin G the dunce, Steve L the fool, Pleather (black jacket) and myself
we've concluded.that Sunday 7 PM Nov 8 until Monday 7 AM Nov 9 I
was asleep at 116 West Washington drop in shelter si6ned in #2.
At trial, the keeper of the record Alyssa Rader with records would testify yes but signing in doesn't mean that the homeless client stayed the night. Could have ate and left.
My state public defender, private firm, court-appointed attorney incorrectly memorializes Paula K (P.M.K) The hoax chronology on Novemeber calendar as that Sunday NW8 11PM until midnight.
The chronology is wrong, correctly it is a twelve hour accusation from Paula K. of 11Pm - midnight Sunday Nov 8, 1998 until noon Monday Nov 9, 1998. The nonpresence alibi defense for the correct chronology has never been in front of the trial court. I am factually innocent and will prove it to my bloggers in this court of popular opinion while simultaneously obtaining your advocacy.
The liar: Kristin J.
6:30 pm Thursday, Nov 12, 98 Almost there. Can't wait to take a shower, watch some television and get a good night's sleep.
100 block of state street there a lot of noise coming from a WIF calling a BLM niger over and over again, or is it nigger. Either way its sad. The joke Chris I. needs an assist. I am duty-bound to intervene.
I ask the joke to step aside and have a word with me. He's grateful for relif.
I ask the joke if the W/F is his woman he replies yes. I explain to him that love is colorblind and at the same time he is worthy of respect from his woman at all times. Racism should never be exercised on each other if you're a couple.
Kristin J. the liar heard every word. She was a street urchin. The story of pleather being stolen from the drug dealer The Fool had spread like wildfire. Even 5-0 had a bold out for a 6ft 4in b/m wearing black pleather. How fortuitous the liar in such close proximity to me and pleather. Plus, shes feeling like exercising revenge for me intervening in her business with the joke Chris I.
I don't realize any of this. I walk around the corner to 116 West Washington Ave drop in shelter and shower, socialize somewhat & then go to sleep. I would not leave until Nov 13th at 7 AM Friday.
I would be arrested Nov 18 wearing pleather. It would take several hours for me to learn that I was being held for assault and child enticement against the liar. Multiple offenses also from the hoax.
Remember pleather story.
5 pm Nov 13, 98 Kristin J. the liar at city count building tells PU John Raduuan an occurrence happened 500 block state st.
She stated the following: she hangs out on State st. a lot. Thursday Nov 12, 1998 1:30 AM with friends, friends went to W. Towne are for something. Near second story restaurant 508. State St. 2 Am Am/N came from 200 blk of W. Ellman St.