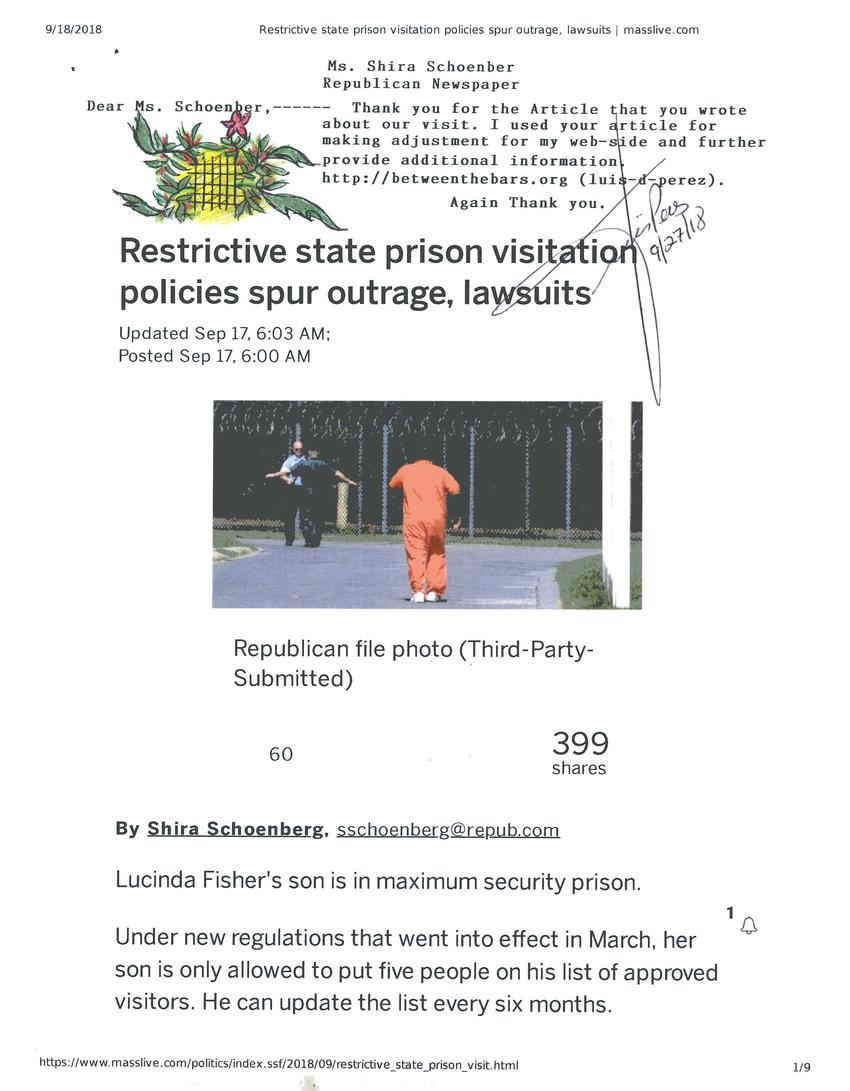 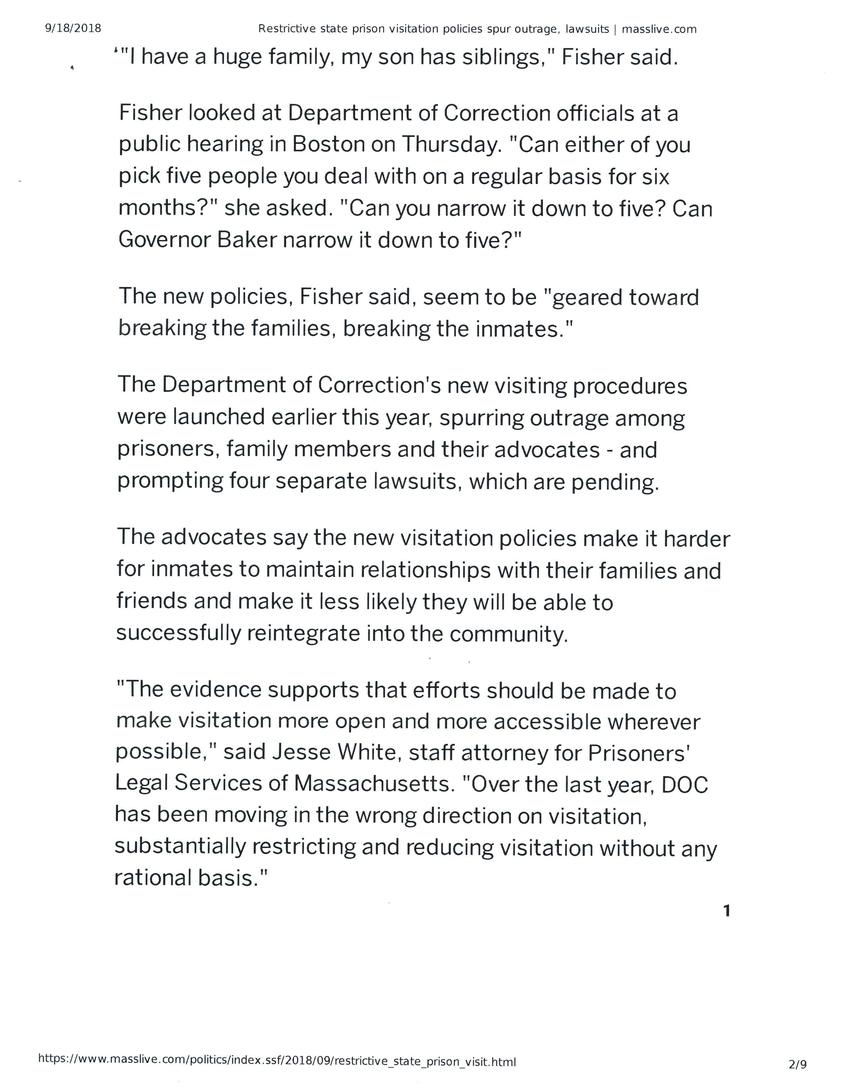 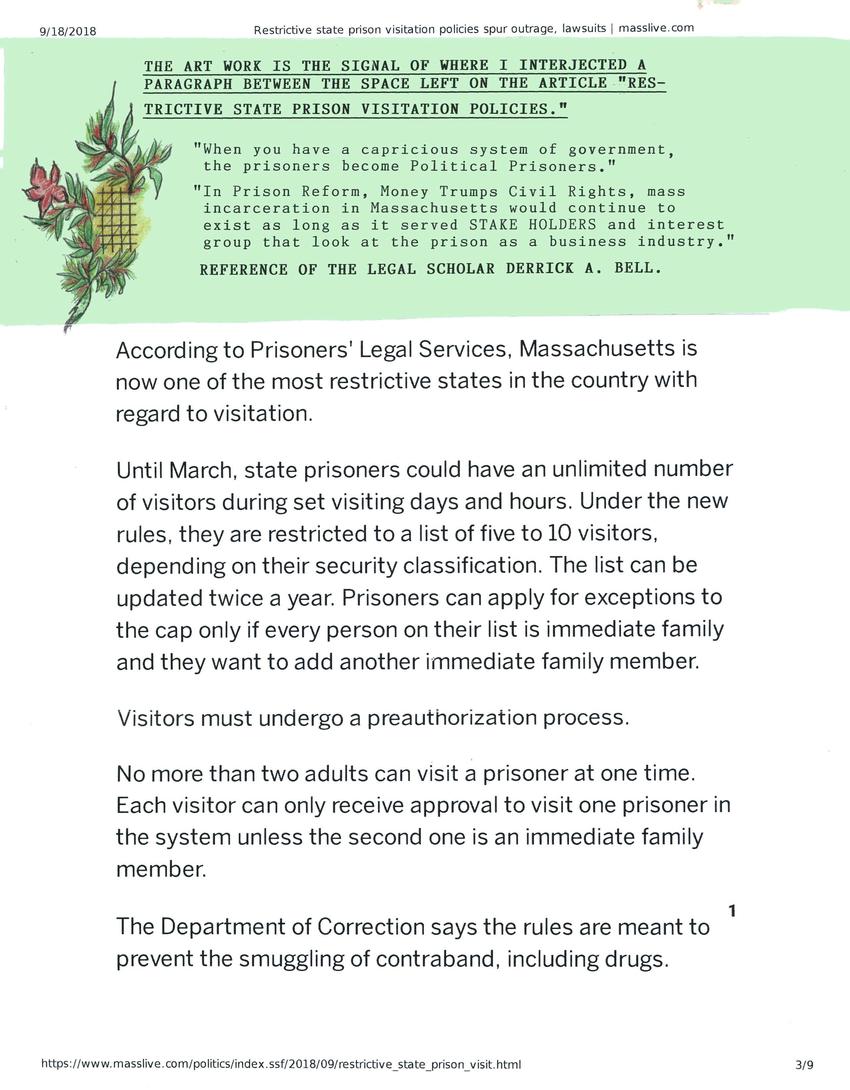 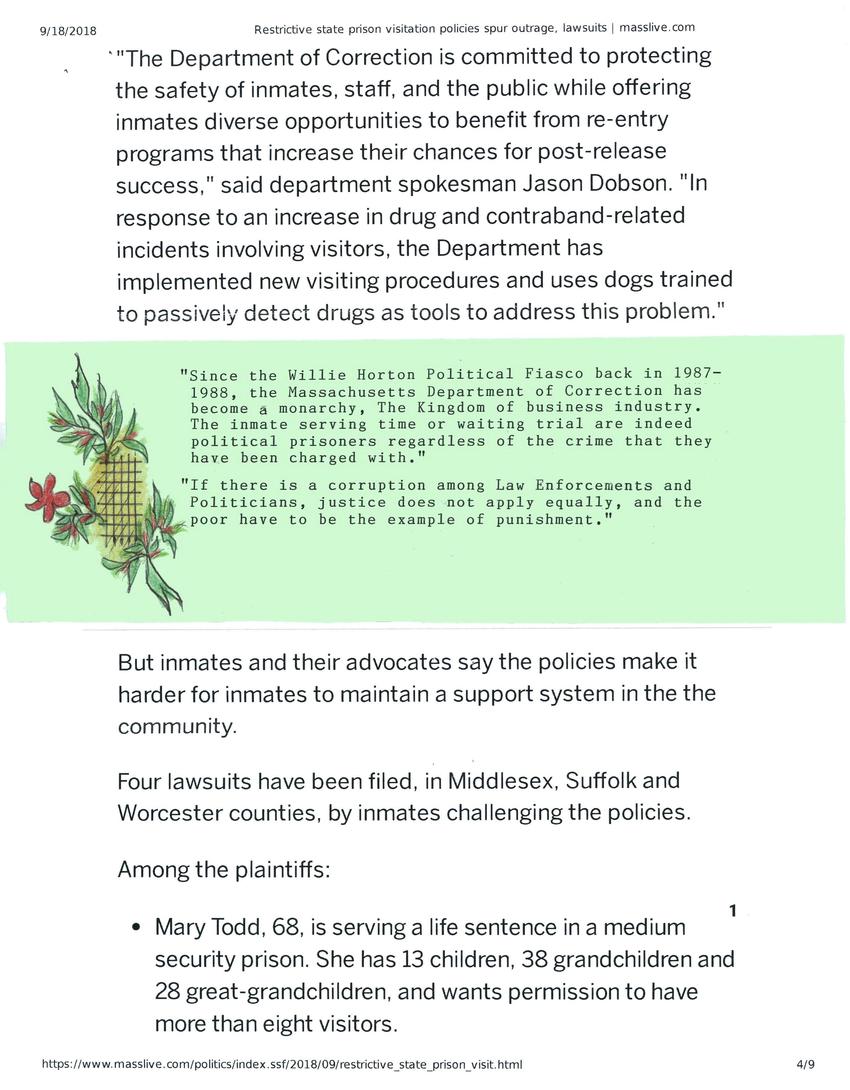 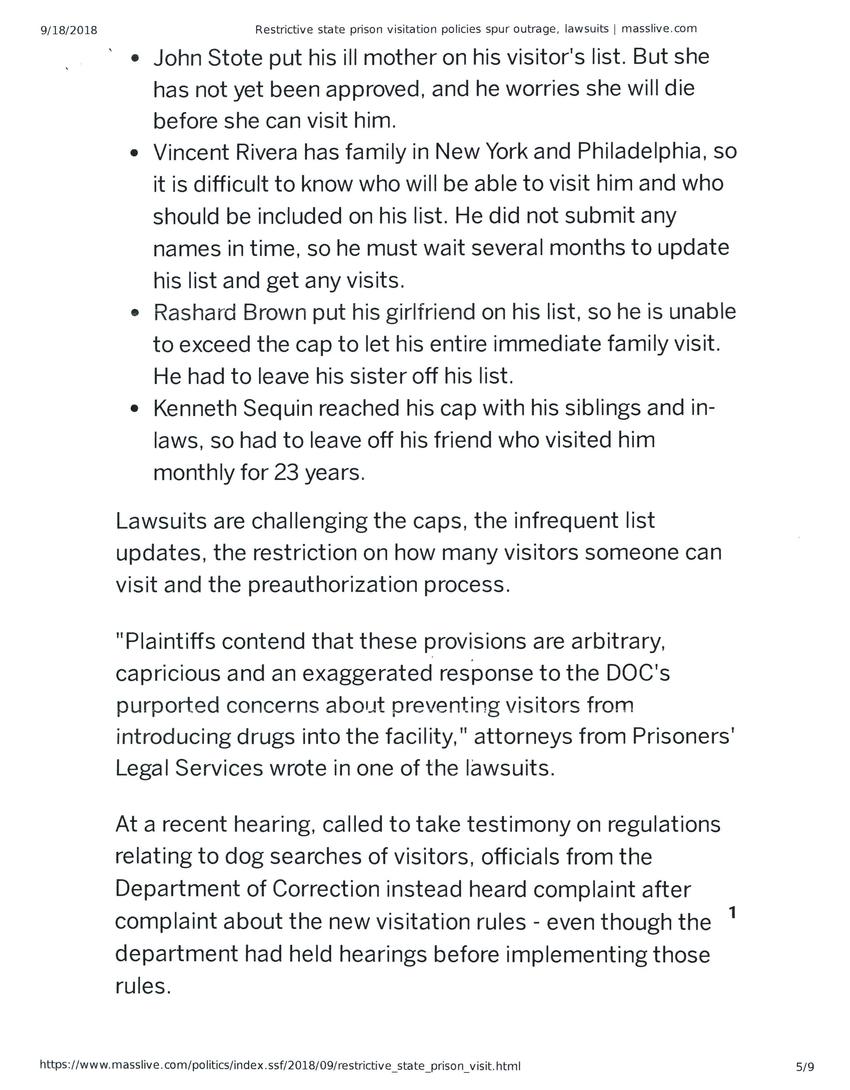 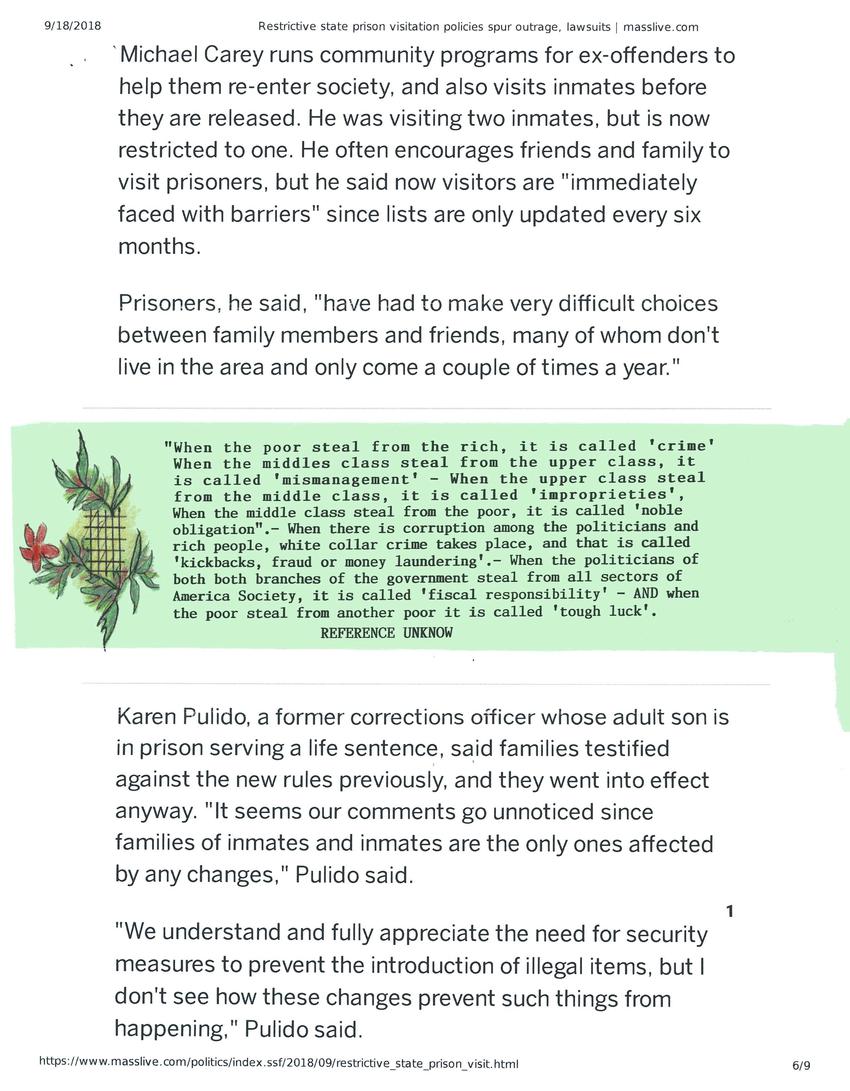 Thank you for the Article that you wrote about our visit. I used your article for making adjustment for my web-site and further provide additional information.

Under new regulations that went into effect in March, her son is only allowed to put five people on his list of approved visitors. He can update the list every six months.

"I have a huge family, my son has siblings", Fisher said.

The Department of Correction's new visiting procedures were launched earlier this year, spurring outrage among prisoners, family members and their advocates - and prompting four separate lawsuits, which are pending.

The advocates say the new visitation policies make it harder for inmates to maintain relationships with their families and friends and make it less likely they will be able to successfully reintegrate into the community.

"The evidence supports that efforts should be made to make visitation more open and more accessible wherever possible", said Jesse White, staff attorney for Prisoners' Legal Services of Massachusetts. "Over the last year, DOC has been moving in the wrong direction on visitation, substantially restricting and reducing visitation without any rational basis."

THE ART WORK IS THE SIGNAL OF WHERE I INTERJECTED A PARAGRAPH BETWEEN THE SPACE LEFT ON THE ARTICLE "RESTRICTIVE STATE PRISON VISITATION POLICIES".

"When you have a capricious system of government, the prisoners become Political Prisoners."

"In Prison Reform, Money Trumps Civil Rights, mass incarceration in Massachusetts would continue to exist as long as it served STAKE HOLDERS and interest groups that look at the prison as a business industry."

REFERENCE OF THE LEGAL SCHOLAR DERRICK A. BELL.

According to Prisoners' Legal Services, Massachusetts is now one of the most restrictive states in the country with regard to visitation.

Until March, state prisoners could have an unlimited number of visitors during set visiting days and hours. Under the new rules, they are restricted to a list of five to 10 visitors, depending on their security classification. The list can be updated twice a year. Prisoners can apply for exceptions to the cap only if every person on their list is immediate family and they want to add another immediate family member.

Visitors must undergo a preauthorization process.

No more than two adults can visit a prisoner at one time. Each visitor can only receive approval to visit one prisoner in the system unless the second one is an immediate family member.

The Department of Correction says the rules are meant to prevent the smuggling of contraband, including drugs.

"The Department of Correction is committed to protecting the safety of inmates, staff, and the public while offering inmates diverse opportunities to benefit from re-entry programs that increase their chances for post-release success", said department spokesman Jason Dobson. "In response to an increase in drug and contraband-related incidents involving visitors, the Department has implemented new visiting procedures and uses dogs trained to passively detect drugs as tools to address this problem."

"Since the Willie Horton Political Fiasco back in 1987-1988, the Massachusetts Department of Correction has become a monarchy, The Kingdom of business industry. The inmate serving time or waiting trial are indeed political prisoners regardless of the crime that they have been charged with."

"If there is a corruption among Law Enforcements and Politicians, justice does not apply equally, and the poor have to be the example of punishment."

But inmates and their advocates say the policies make it harder for inmates to maintain a support system in the community.

Four lawsuits have been filed, in Middlesex, Suffolk and Worcester counties, by inmates challenging the policies.

* Mary Todd, 68, is serving a life sentence in a medium security prison. She has 13 children, 38 grandchildren and 28 great-grandchildren, and wants permission to have more than eight visitors.

* John Stote put his ill mother on his visitor's list. But she has not yet been approved, and he worries she will die before she can visit him.

* Vincent Rivera has family in New York and Philadelphia, so it is difficult to know who will be able to visit him and who should be included on his list. He did not submit any names in time, so he must wait several months to update his list and get any visits.

* Rashard Brown put his girlfriend on his list, so he is unable to exceed the cap to let his entire immediate family visit. He had to leave his sister off his list.

* Kenneth Sequin reached his cap with his siblings and in-laws, so had to leave off his friend who visited him monthly for 23 years.

Lawsuits are challenging the caps, the infrequent list updates, the restriction on how many visitors someone can visit and the preauthorization process.

"Plaintiffs contend that these provisions are arbitrary, capricious and an exaggerated response to the DOC's purported concerns about preventing visitors from introducing drugs into the facility", attorneys from Prisoners' Legal Services wrote in one of the lawsuits.

At a recent hearing, called to take testimony on regulations relating to dog searches of visitors, officials from the Department of Correction instead heard complaint after complaint about the new visitation rules - even though the department had held hearings before implementing those rules.

Michael Carey runs community programs for ex-offenders to help them re-enter society, and also visits inmates before they are released. He was visiting two inmates, but is now restricted to one. He often encourages friends and family to visit prisoners, but he said now visitors are "immensely faced with barriers" since lists are only updated every six months.

Prisoners, he said, "have had to make very difficult choices between family members and friends, many of whom don't live in the area and only come a couple of times a year."

Karen Pulido, a former corrections officer whose adult son is in prison serving a life sentence, said families testified against the new rules previously, and they went into effect anyway. "It seems our comments go unnoticed since families of inmates and inmates are the only ones affected by any changes", Pulido said.

"We understand and fully appreciate the need for security measures to prevent the introduction of illegal items, but I don't see how these changes prevent such things from happening", Pulido said.

Mary Valerio, whose husband is in prison, said, "What has struck me most about the prisons is the absence of any humanity. To the DOC the men are only numbers, but to us they are our husbands, fathers, brothers, sons and family members."

Valerio said family members "are your partners in their successful re-entry, not your enemy", and visitation should be expanded, not reduced, to lower recidivism rates.

Don Perry, who spent 18 years in prison, said his daughter was born three days after he got to prison in Walpole. As his daughter grew up, he had the opportunity to see her on family days, where they could play in the prison yard. "That visit was instrumental in helping me maintain my relationship with my daughter, family and community. It helped contribute overall to my rehabilitation", Perry said.

Perry read a letter from a prisoner who asked the state to reconsider the policy.

The man wrote that he has no family in New England and his visitors travel from out of state unexpectedly whenever they are able. "The new visiting policy will eliminate this from ever happening", the man wrote.

Several people also spoke out against the use of dogs to search visitors, saying it could discourage visitors who are afraid of or allergic to dogs, and it creates a more frightening atmosphere for visitors, especially children.

Caroline Bays, a Watertown town councilor who visits a friend of a friend in solitary confinement, said the vast majority of drugs are not being smuggled in by visitors. With dog searches, she said, "Visits will plummet, families will suffer and drugs will continue to make their way into prison as you focus on the wrong people."

[information about hospitals and treatment centers]