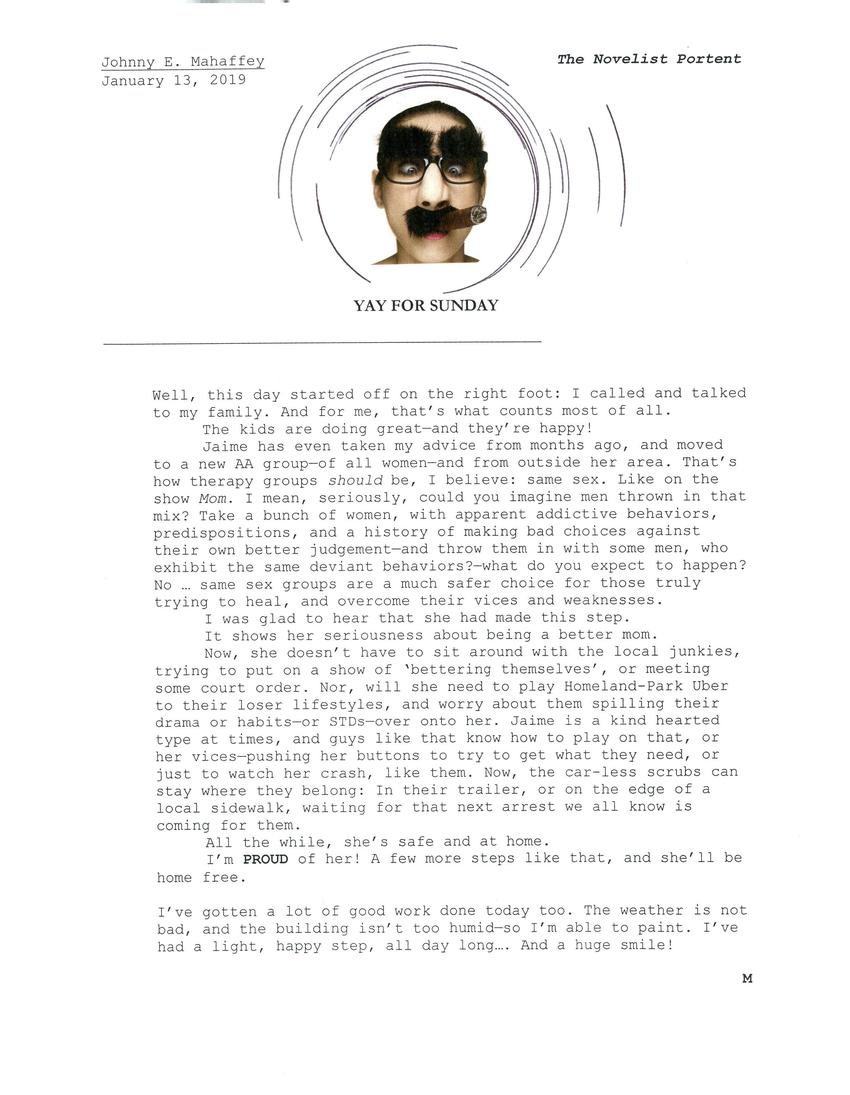 Well, this day started off on the right foot: I called and talked to my family. And for me, that's what counts most of all.
The kids are doing great - and they're happy!
Jaime has even taken my advice from months ago, and moved to a new AA group - of all women - and from outside her area. That's how therapy groups should be, I believe: same sex. Like on the show Mom. I mean, seriously, could you imagine men thrown in that mix? Take a bunch of women, with apparent addictive behaviors, predispositions, and a history of making bad choices against their own better judgement - and thrown them in with some men, who exhibit the same deviant behaviors? - what do you expect to happen? No … same sex groups are a much safer choice for those truly trying to heal, and overcome their vices and weaknesses.
I was glad to hear that she had made this step.
It shows her seriousness about being a better mom.
Now, she doesn't have to sit around with the local junkies, trying to put on a show of 'bettering themselves', or meeting some court order. Nor, will she need to play Homeland-Park Uber to their loser lifestyles, and worry about them spilling their drama or habits - or STDs - over onto her. Jaime is a kind hearted type at times, and guys like that know how to play on that, or her vices - pushing her buttons to try to get what they need, or just to watch her crash, like them. Now, the car-less scrubs can stay where they belong: In their trailer, or on the edge of a local sidewalk, waiting for that next arrest we all know is coming for them.
All the while, she's safe and at home.
I'm PROUD of her! A few more steps like that, and she'll be home free.

I've gotten a lot of good work done today too. The weather is not bad, and the building isn't too humid - so I'm able to paint. I've had a light, happy step, all day long... And a huge smile!

I didn't join an all women's group and it's 15 minutes from my house. As smart as you are, you do not understand addiction.
This is good stuff and i agree with it. I went to AA for 2 years and got nowhere until i joined an all female group. Most of us realized that men were the causes of our drinking and there they were looking at us in regular AA. But with just us girls we could talk without sexual innuendos from the guys. It really helped us open up when it was just us. A lot more honesty. And no one asking u out for a drink afterwards.