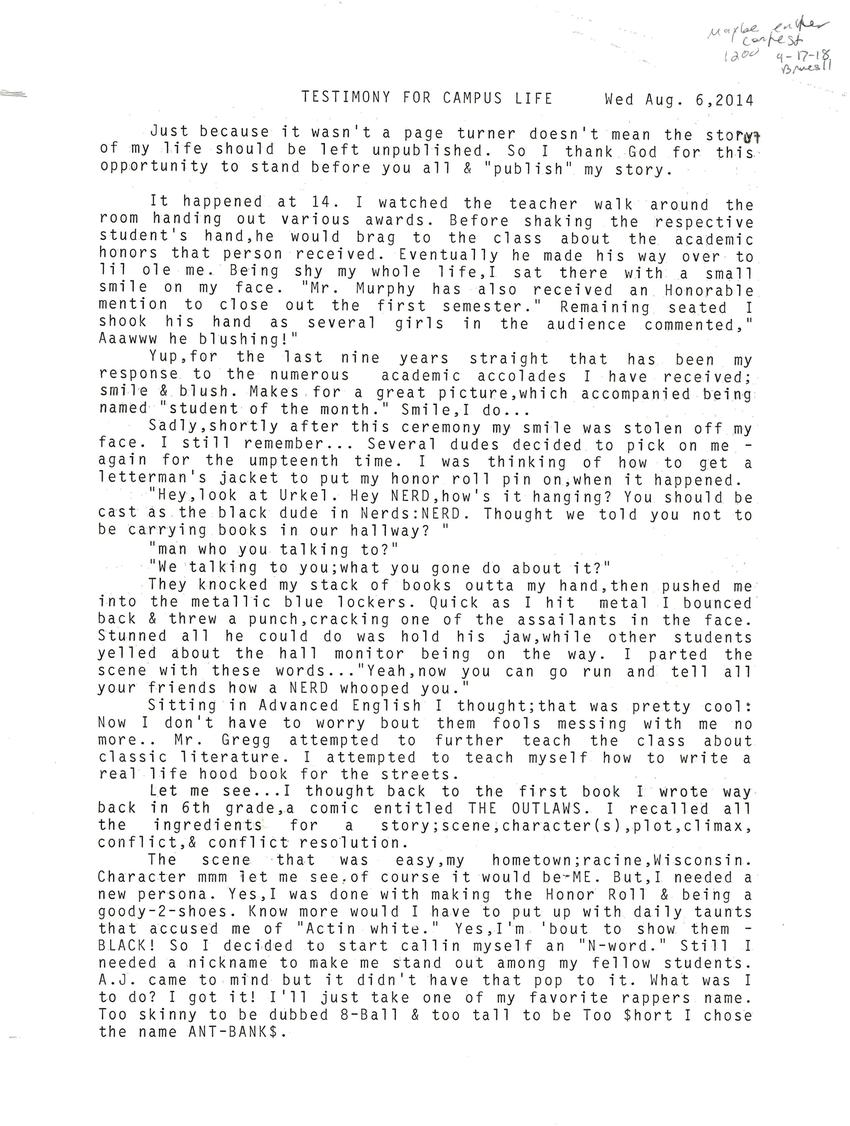 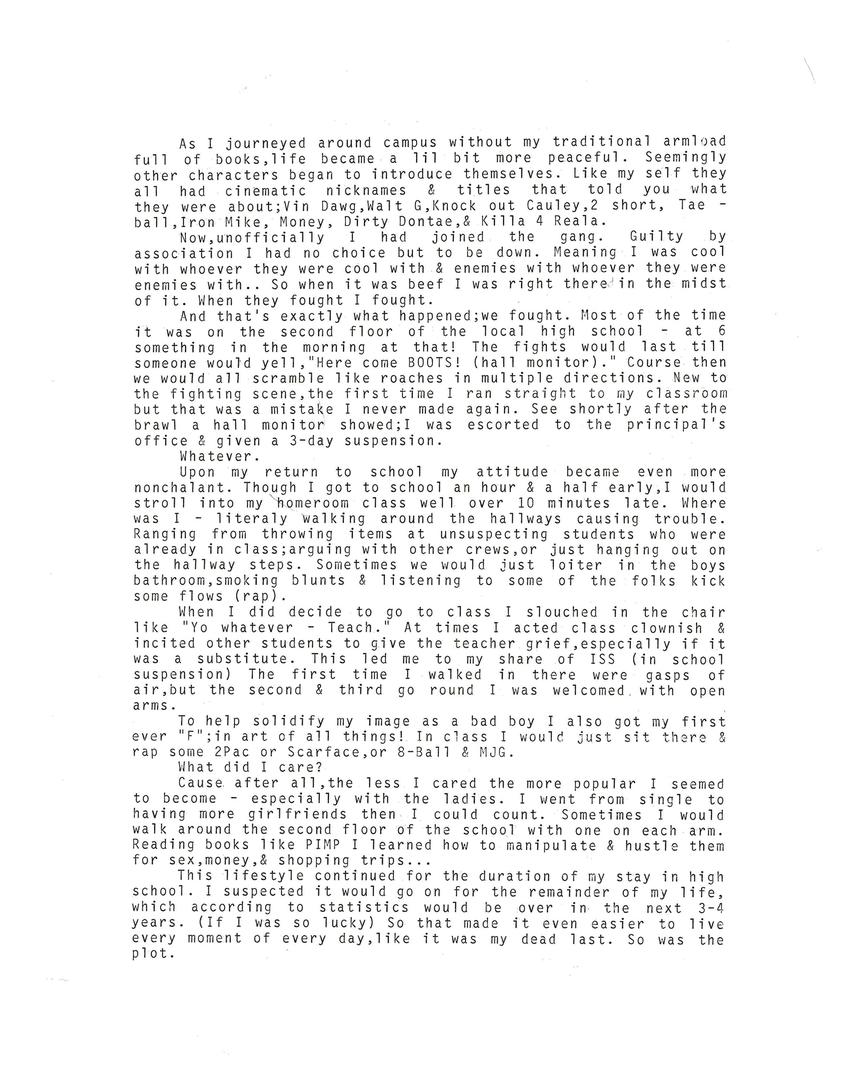 Just because it wasn't a page turner doesn't mean the story of my life should be left unpublished. So I thank God for this opportunity to stand before you all & "publish" my story.

It happened at 14. I watched the teacher walk around the room handing out various awards. Before shaking the respective student's hand, he would brag to the class about the academic honors that person received. Eventually he made his way over to lil ole me. Being shy my whole life, I sat there with a small smile on my face. "Mr. Murphy has also received an Honorable mention to close out the first semester." Remaining seated I shook his hand as several girls in the audience commented, "Aaawww he blushing!"

Yup, for the last nine years straight that has been my response to the numerous academic accolades I have received; smile & blush. Makes for a great picture, which accompanied being names "student of the month". Smile, I do...

Sadly, shortly after this ceremony my smile was stolen off my face. I still remember... Several dudes decided to pick on me - again for the umpteenth time. I was thinking of how to get a letterman's jacket to put my honor roll pin on, when it happened.

"Hey, look at Urkel. Hey NERD, how's it hanging? You should be cast as the black dude in Nerds: NERD. Thought we told you not to be carrying books in our hallway?"

"man who you talking to?"

"We talking to you; what you gone do about it?"

They knocked my stack of books outta my hand, then pushed me into the metallic blue lockers. Quick as I hit metal I bounced back & threw a punch, cracking one of the assailants in the face. Stunned all he could do was hold his jaw, while other students yelled about the hall monitor being on the way. I parted the scene with these words... "Yeah, now you can go run and tell all your friends how a NERD whooped you."

Sitting in Advanced English I thought; that was pretty cool: Now I don't have to worry bout them fools messing with me no more... Mr. Gregg attempted to further teach the class about classic literature. I attempted to teach myself how to write a real life hood book for the streets.

Let me see... I thought back to the first book I wrote way back in 6th grade, a comic entitled THE OUTLAWS. I recalled all the ingredients for a story; scene, character(s), plot, climax, conflict, & conflict resolution.

The scene that was easy, my hometown: racine, Wisconsin. Character mmm let me see. Of course it would be - ME. But, I needed a new persona. Yes, I was done with making the Honor Roll & being a goody-2-shoes. Know more would I have to put up with daily taunts that accused me of "Actin white". Yes, I'm 'bout to show them - BLACK! So I decided to start callin myself an "N-word". Still I needed a nickname to make me stand out among my fellow students. A.J. came to mind but it didn't have that pop to it. What was I to do? I got it! I'll just take one of my favorite rappers name. Too skinny to be dubbed 8-Ball & too tall to be Too $hort I chose the name ANT-BANK$.

As I journeyed around campus without my traditional armload full of books, life became a lil bit more peaceful. Seemingly other characters began to introduce themselves. Like my self they all had cinematic nicknames & titles that told you what they were about; Vin Dawg, Walt G, Knock out Cauley, 2 short, Tae-ball, Iron Mike, Money, Dirty Dontae, & Killa 4 Reala.

And that's exactly what happened; we fought. Most of the time it was on the second floor of the local high school - at 6 something in the morning at that! The fights would last until someone would yell, "Here come BOOTS! (hall monitor)". Course then we would all scramble like roaches in multiple directions. New to the fighting scene, the first time I ran straight to my classroom but that was a mistake I never made again. See shortly after the brawl a hall monitor showed; I was escorted to the principal's office & given a 3-day suspension.

Upon my return to school my attitude became even more nonchalant. Though I got to school an hour & a half early, I would stroll into my homeroom class well over 10 minutes late. Where was I - literally walking around the hallways causing trouble. Ranging from throwing items at unsuspecting students who were already in class; arguing with other crews, or just hanging out on the hallway steps. Sometimes we would loiter in the boys bathroom, smoking blunts & listening to some of the folks kick some flows (rap).

When I did decide to go to class I slouched in the chair like "Yo whatever - Teach." At times I acted class clownish & incited other students to give the teacher grief, especially if it was a substitute. This led me to my share of ISS (in school suspension). The first time I walked in there were gasps of air, but the second & third go round I was welcomed with open arms.

To help solidify my image as a bad boy I also got my first ever "F"; in art of all things! In class I would just sit there & rap some 2Pac or Scarface, or 8-Ball & MJG.

What did I care?

Cause after all, the less I cared the more popular I seemed to become - especially with the ladies. I went from single to having more girlfriends then I could count. Sometimes I would walk around the second floor of the school with one on each arm. Reading books like PIMP I learned how to manipulate & hustle them for sex, money, & shopping trips...

This lifestyle continued for the duration of my stay in high school. I suspected it would go on for the remainder of my life, which according to statistics would be over in the next 3-4 years. (If I was so lucky) So that made it even easier to live every moment of every day, like it was my dead last. So was the plot.