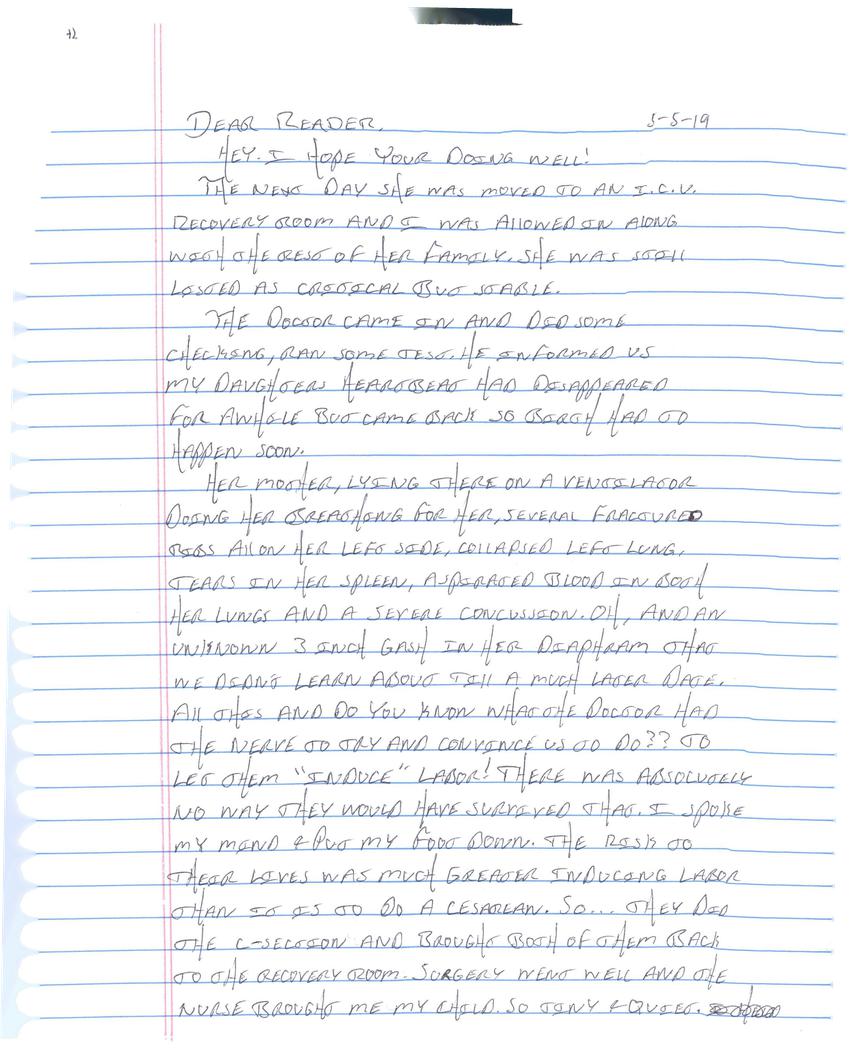 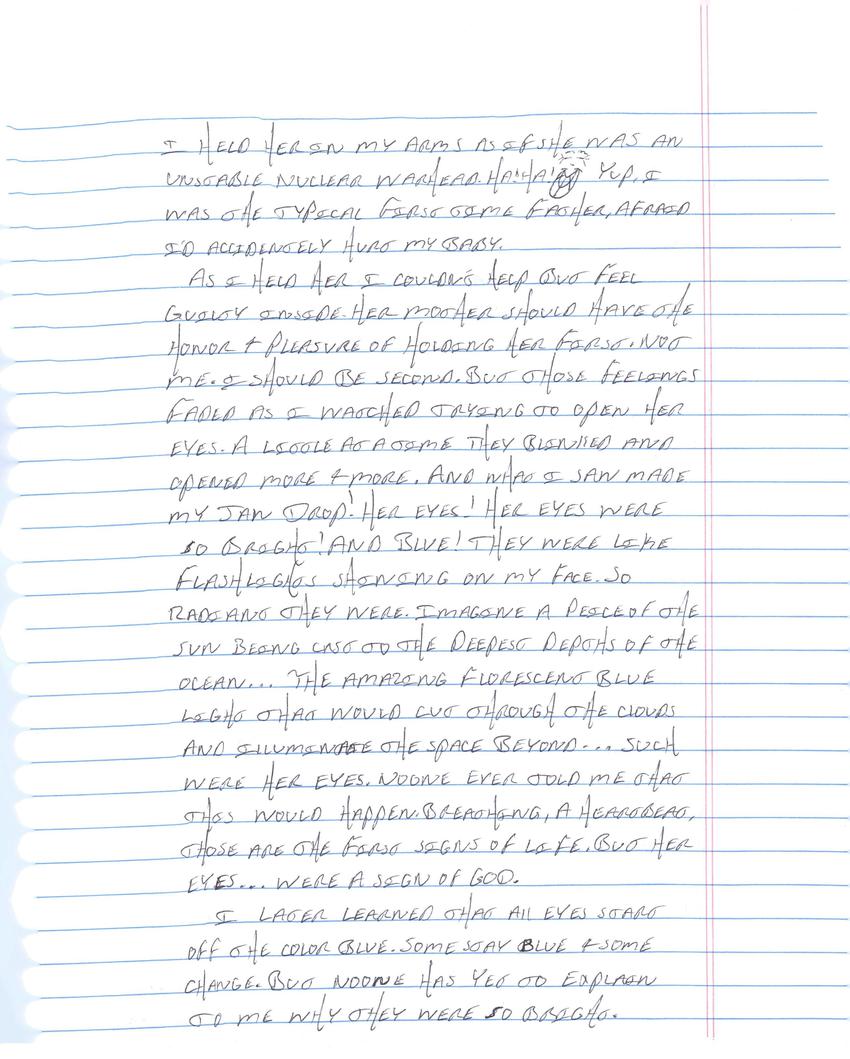 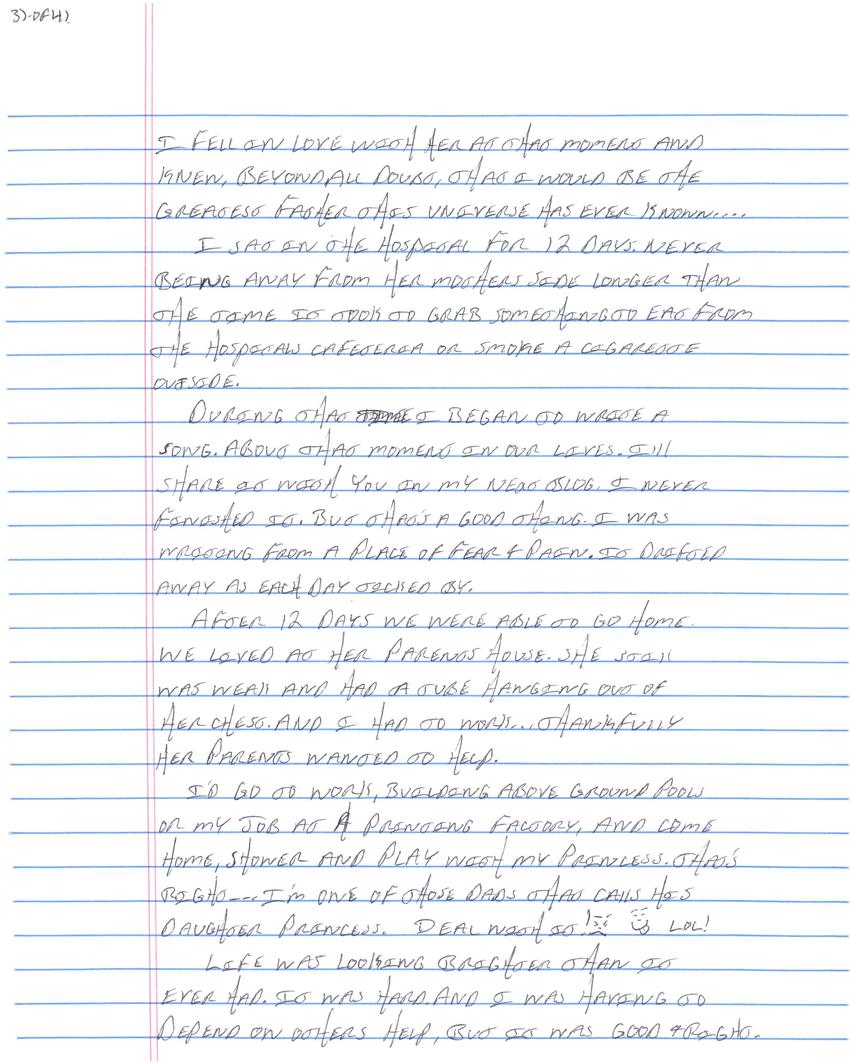 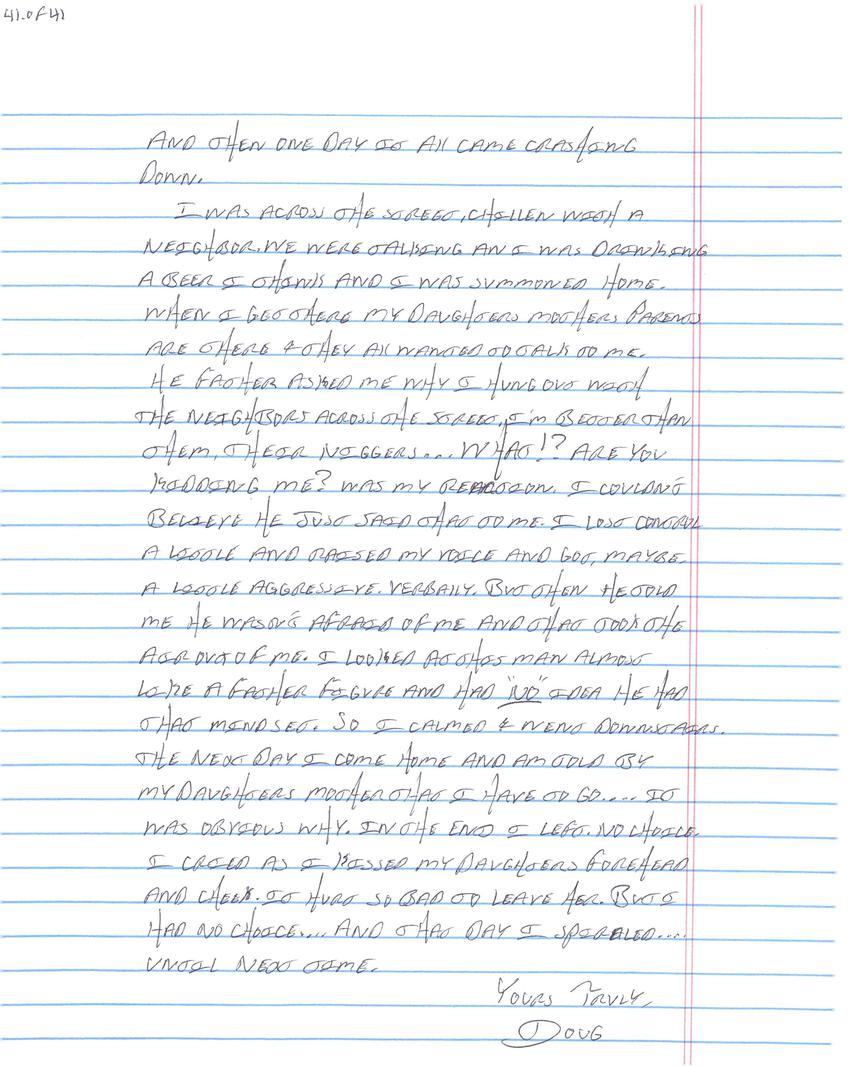 Hey. I hope you're doing well!

The next day she was moved to an ICU recovery room and I was allowed in along with the rest of her family. She was still listed as critical but stable.

The doctor came in and did some checking, ran some tests. He informed us my daughter's heartbeat had disappeared for awhile but came back so birth had to happen soon.

Her mother, lying there on a ventilator doing her breathing for her, several fractured ribs along her left side, collapsed left lung, tears in her spleen, aspirated blood in both her lungs and a severe concussion. Oh, and an unknown 3 inch gash in her diaphragm that we didn't learn about till a much later date. All this and do you know what the doctor had the nerve to try and convince us to do?? To let them "induce" labor! There was absolutely no way they would have survived that. I spoke my mind + put my foot down. The risk to their lives was much greater inducing labor than it is to do a Cesarean. So... they did the C-section and brought both of them back to the recovery room. Surgery went well and the nurse brought me my child. So tiny + quiet. I held her in my arms as if she was an unstable nuclear warhead. Ha! Ha! :D Yup, I was the typical first time father, afraid I'd accidentally hurt my baby.

As I held her I couldn't help but feel guilty inside. Her mother should have the honor + pleasure of holding her first. Not me. I should be second. But those feelings faded as I watched trying to open her eyes. A little at a time they blinked and opened more + more. And what I saw made my jaw drop! Her eyes! Her eyes were so bright! And blue! They were like flashlights shining on my face. So radiant they were. Imagine a piece of the sun being cast to the deepest depths of the ocean... The amazing fluorescent blue light that would cut through the clouds and illuminate the space beyond... such were her eyes. No one ever told me that this would happen. Breathing, a heartbeat, those are the first signs of life. But her eyes... were a sign of God.

I later learned that all eyes start off the color blue. Some stay blue + some change. But no one has yet to explain to me why they were so bright. I fell in love with her at that moment and knew, beyond all doubt, that I would be the greatest father this universe has ever known...

I sat in the hospital for 12 days. Never being away from her mother's side longer than the time it took to grab something to eat from the hospital cafeteria or smoke a cigarette outside.

During that time I began to write a song. About that moment in our lives. I'll share it with you in my next blog. I never finished it. But that's a good thing. I was writing from a place of fear + pain. It drifted away as each day ticked by.

After 12 days we were able to go home. We lived at her parents' house. She still was weak and had a tube hanging out of her chest. And I had to work... Thankfully her parents wanted to help.

I'd go to work, building above ground pools or my job at a printing factory, and come home,shower and play with my princess. That's right... I'm one of those dads that calls his daughter Princess. Deal with it! [angry emoticon] :P LOL!

Life was looking brighter than it ever had. It was hard and I was having to depend on others' help, but it was good + right. And then one day it all came crashing down.

I was across the street, chillen with a neighbor. We were talking and I was drinking a beer I think and I was summoned home. When I got there my daughter's mother's parents are there + they all wanted to talk to me. Her father asked me why I hung out with the neighbors across the street, I'm better than them. They're niggers... What!? Are you kidding me? was my reaction. I couldn't believe he just said that to me. I lost control a little and raised my voice and got, maybe, a little aggressive, verbally. But then he told me he wasn't afraid of me and that took the air out of me. I looked at this man almost like a father figure and had NO idea he had that mindset. So I calmed + went downstairs. The next day I come home and am told by my daughter's mother that I have to go... It was obvious why. In the end I left. No choice. I cried as I kissed my daughter's forehead and cheek. It hurt so bad to leave her. But I had no choice... and that day I spiraled... until next time.