Mass Punishment In The Women Prison...... 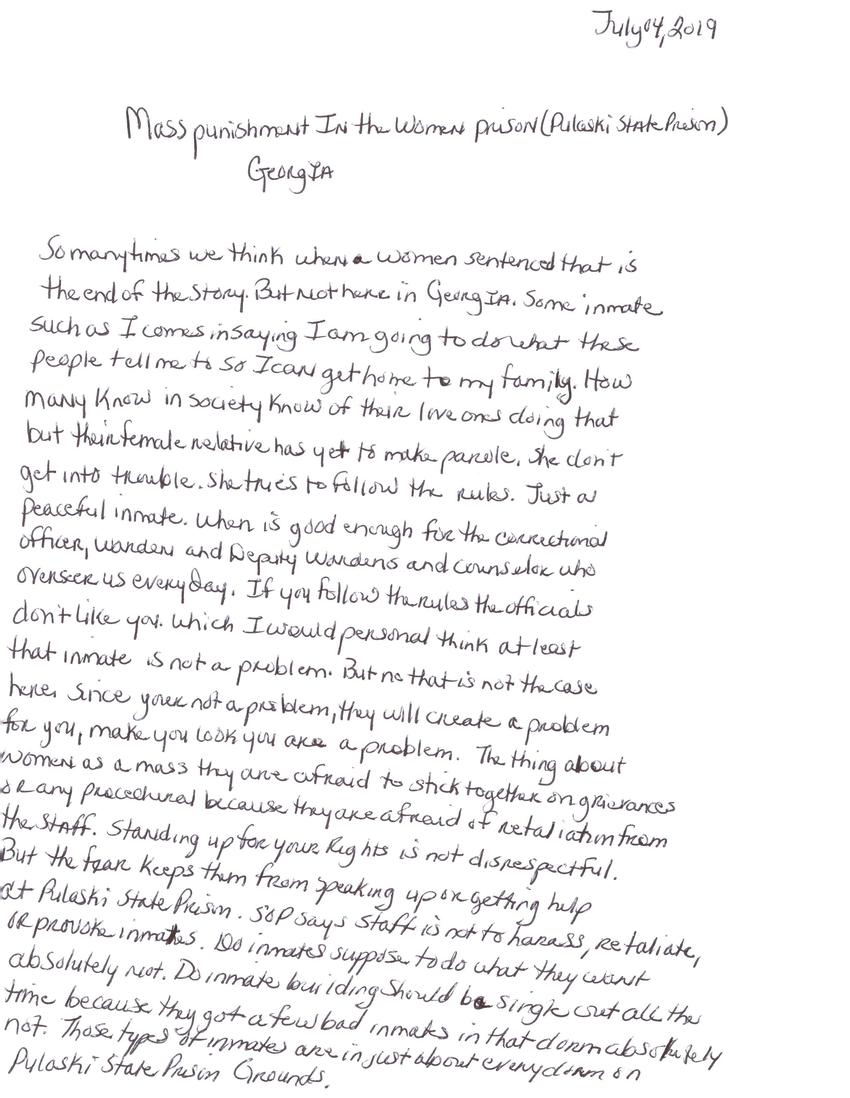 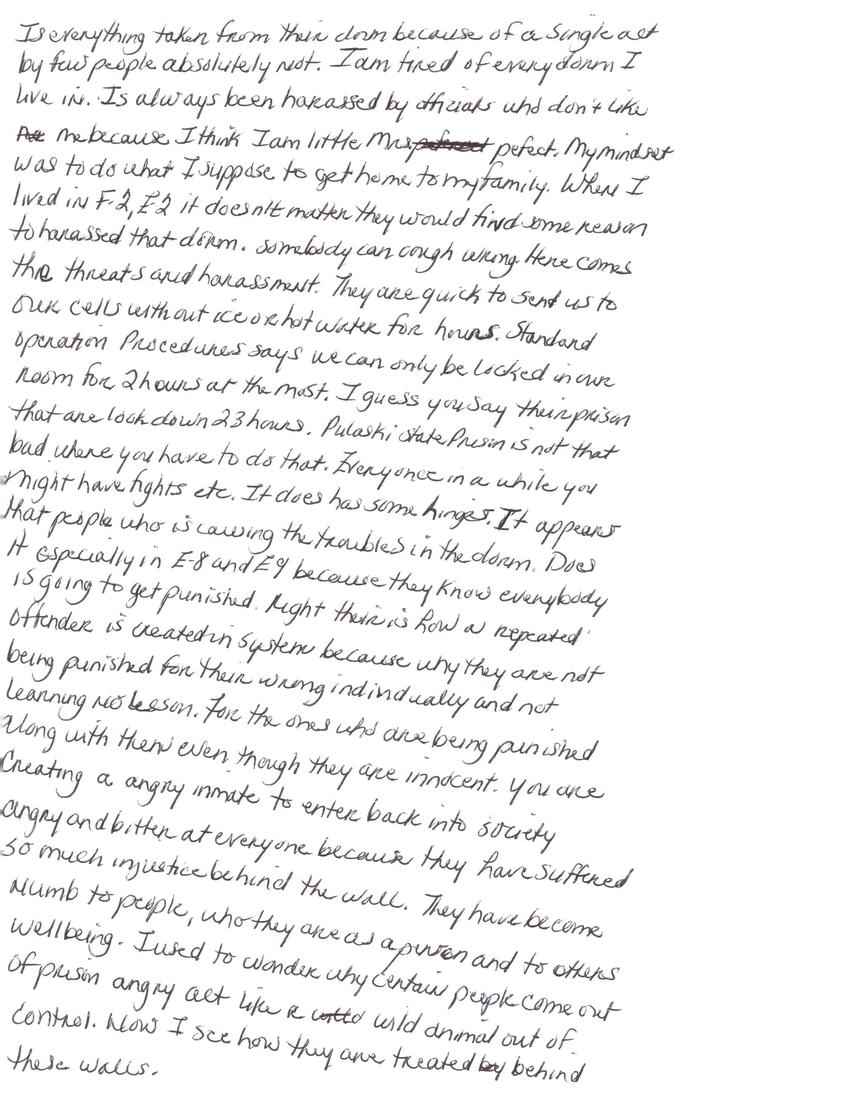 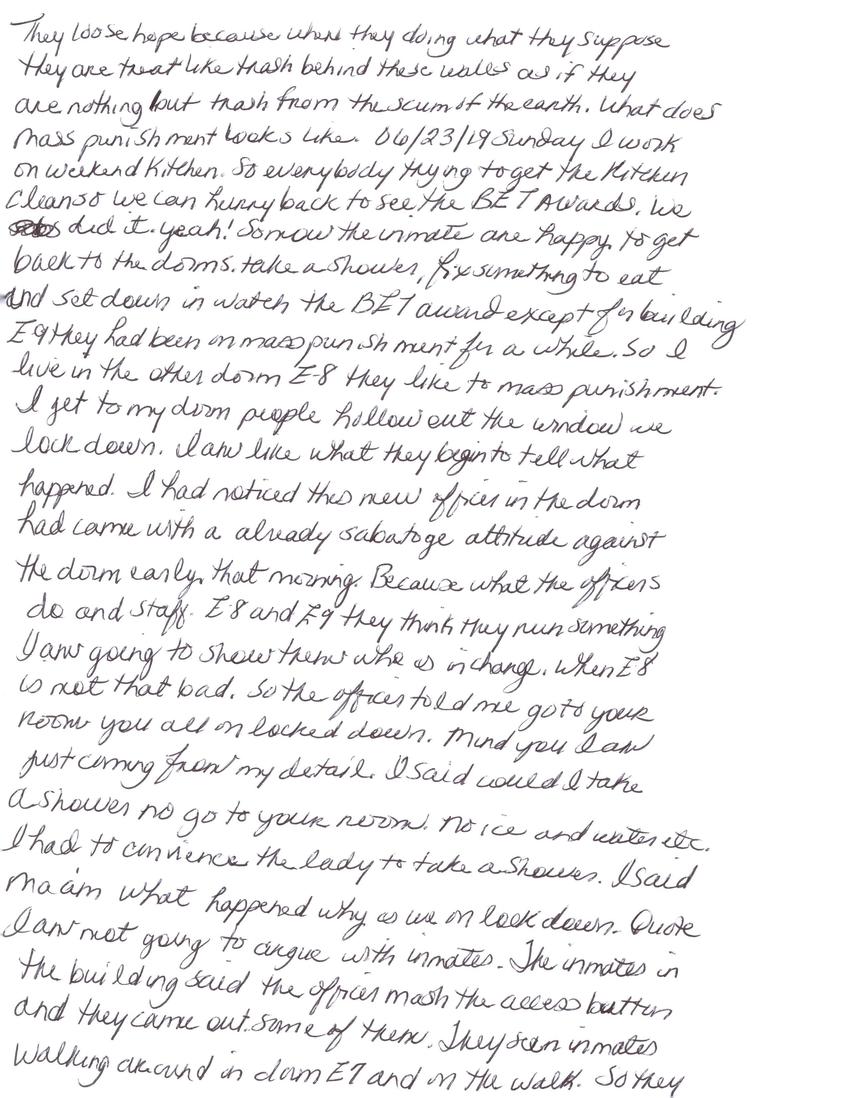 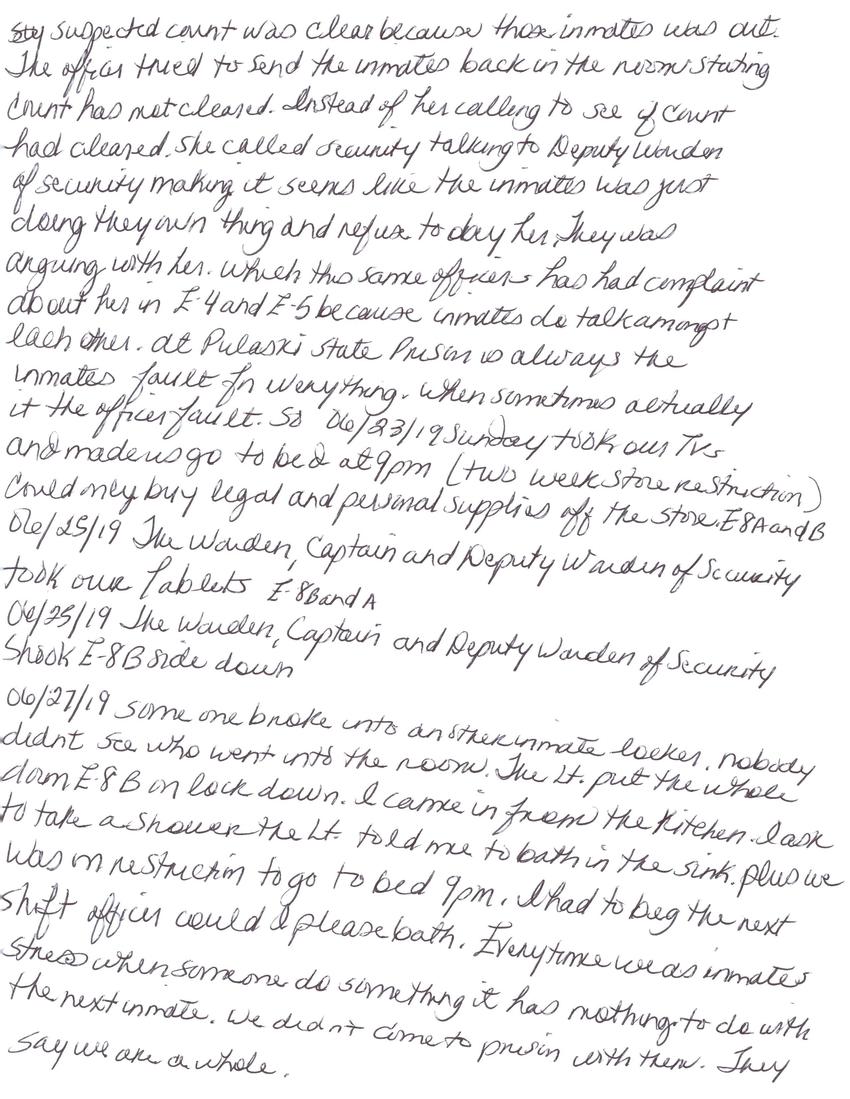 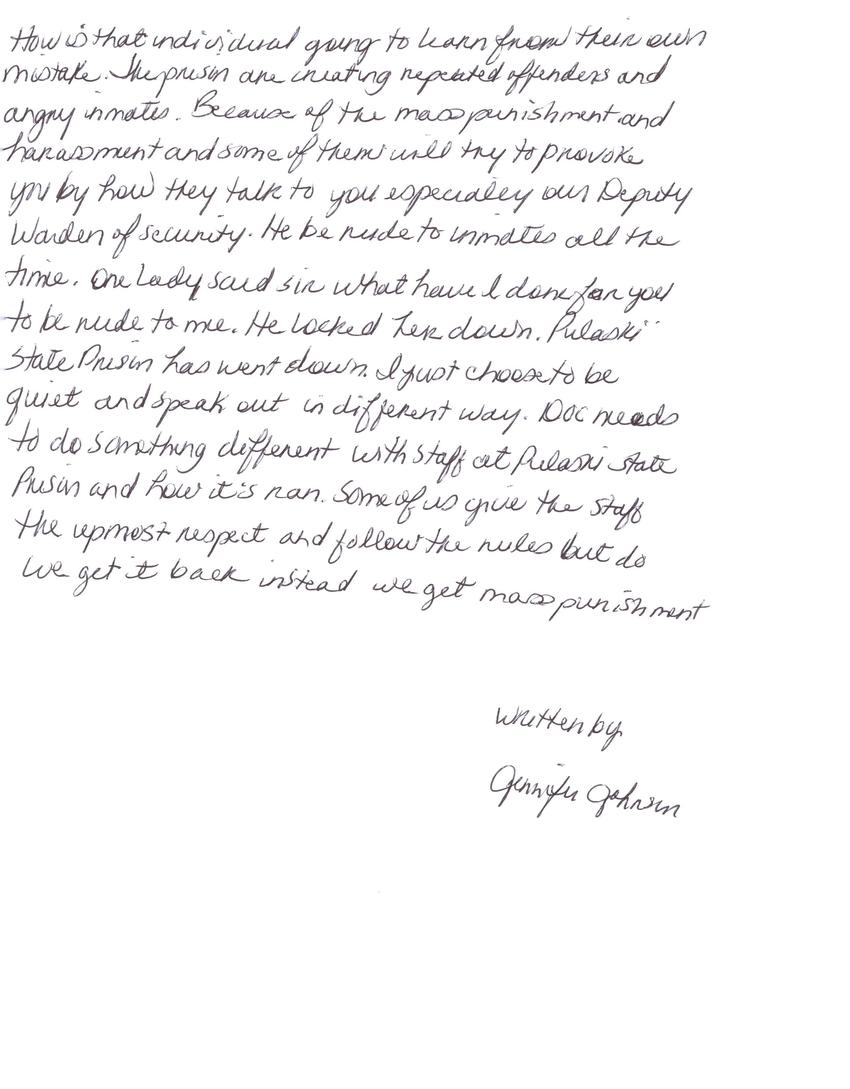 So many times we think when a women is sentenced, that is the end of the story. But not here in Georgia. Some inmates such as I come in saying, "I'm going to do what these people tell me to so I can get home to my family."

How many know in society that their loved ones are doing that, but their female relatives have yet to make parole? She doesn't get into trouble. She tries to follow the rules. Just a peaceful inmate. When is "good enough" for the correctional officers, warden, and deputy wardens, and counselors who oversee us every day? If you follow the rules, the officials don't like you. Which I would personally think at least that inmate is not a problem.

But no, that is not the case here.

Since you're not a problem, they will create a problem for you. Make you look like you are the problem.

Are inmates supposed to do what they want? Absolutely not. Should inmate buildings be singled out all the time because they got a few bad inmates in that dorm? Absolutely not. Those types of inmates are in just about every dorm on Pulaski State Prison grounds. Should everything be taken from their dorm because of a single act by a few people? Absolutely not.

I am tired of every dorm I live in. It's always been harassed by officials who don't care like me because I think I am Little Ms. Perfect. My mindset is I do what I am supposed to do to get home to my family.

When I lived in F-2, E-2, it doesn't matter—they would find some reason to harass that dorm. Somebody can cough wrong, and here comes the threats and harassment. They are quick to send us to our cells without ice or hot water for hours. Standard operation procedures says we can only be locked in room for two hours at the most. I guess you can say their prison are locked down for 23 hours.

Pulaski State Prison is not that bad, where you have to do that. Every once in a while, you might have fights, etc. It does have some hinges.

It appears that people who are causing the troubles in the dorm. They do it especially in E-8 and E-9 because they know everybody is going to get punished. Right there is how a repeat offender is created in the system because why are they not being punished for their wrongs individually? They don't learn any lesson that way.

For the ones being punished with them, even though they are innocent, you are creating an angry inmate to re-enter society. Angry and bitter at everyone because they have suffered so much injustice behind the wall. They have become numb to people, who they are as a person and to others' well-being.

06/23/19 (Sunday) I work on weekend kitchen. So, everybody is trying to get the kitchen cleaned so we can hurry back to the see the BET Awards. We did it. Yeah! So, now the inmates are happy to get back to the dorms, take a shower, fix something to eat, and set down and watch the BET award except for building E9. They had been on mass punishment for a while.

So, I live in the other dorm E-8. They like to mass punishment. I get to my dorm people, hollow out the window we lockdown. I am like, "What, they begin to tell what happened?" I had noticed this new officer in the dorm had come with an "already sabotage" attitude against the dorm early that morning. Because what the officers and staff do in E-8 and E-9, they think they can run something.

I am going to show them who is in charge. When E-8 is not that bad. So, the officer told me, "Go to your room. You're all locked down."

Mind you, I am just coming from my detail. I said, "Could I take a shower?" "No, go to your room." No ice and water, etc. I had to convince the lady to take a shower. I said, "Ma'am, what happened? Why are we on lockdown?"

Quote: "I am not going to argue with inmates."

The inmates in the building said that the officer mash the button, and they came out. Some of them, they saw inmates walking around in dorm E9 and on the walk. So, they suspected count was clear because those inmates were out. The officer tried to send the inmates back in the room, stating count has not been cleared.

Instead of her calling to see if count had already, she called security, talking to deputy warden of security, making it seem like the inmates were just doing their own thing and refused to obey her. They were arguing with her. Which this same officer has had complaints about her in E-4 and E-5 because inmates do talk among each other.

At Pulaski State Prison, it's always the inmates' fault for everything. When sometimes, it's actually the officer's fault.

So, 06/27/19 Someone broke into another inmate locker. Nobody didn't see who went into the room. The Lt. put the whole dorm (E8B) on lockdown. I came in from the kitchen. I ask to take a shower. The Lt. told me to bathe in the sink. Plus, we were on restriction to go to bed 9 PM. I had to beg the next shift officer. "Could I please bathe?"

Every time we inmates stress when someone is doing something, it has nothing to do with the next inmate. We didn't come to prison with them. They say we are a whole.

How is that individual going to learn from their own mistake? The prisons are creating repeat offenders and angry inmates because of the mass punishments and harassment. Some of them will try to provoke you by how they talk to you, especially our deputy warden of security. He is rude to inmates all the time.

One lady said, "Sir, what have I done to you to be rude to me?" He locked her down.