A Death That Didn't Have To Happen 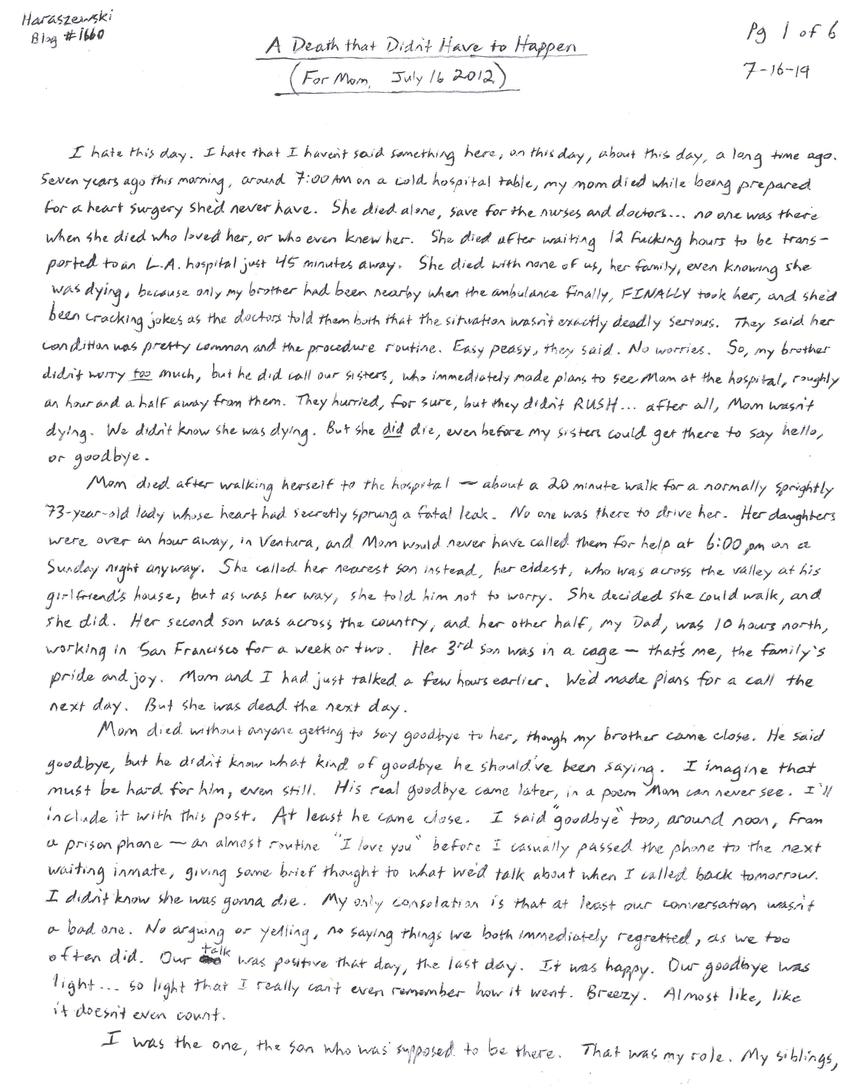 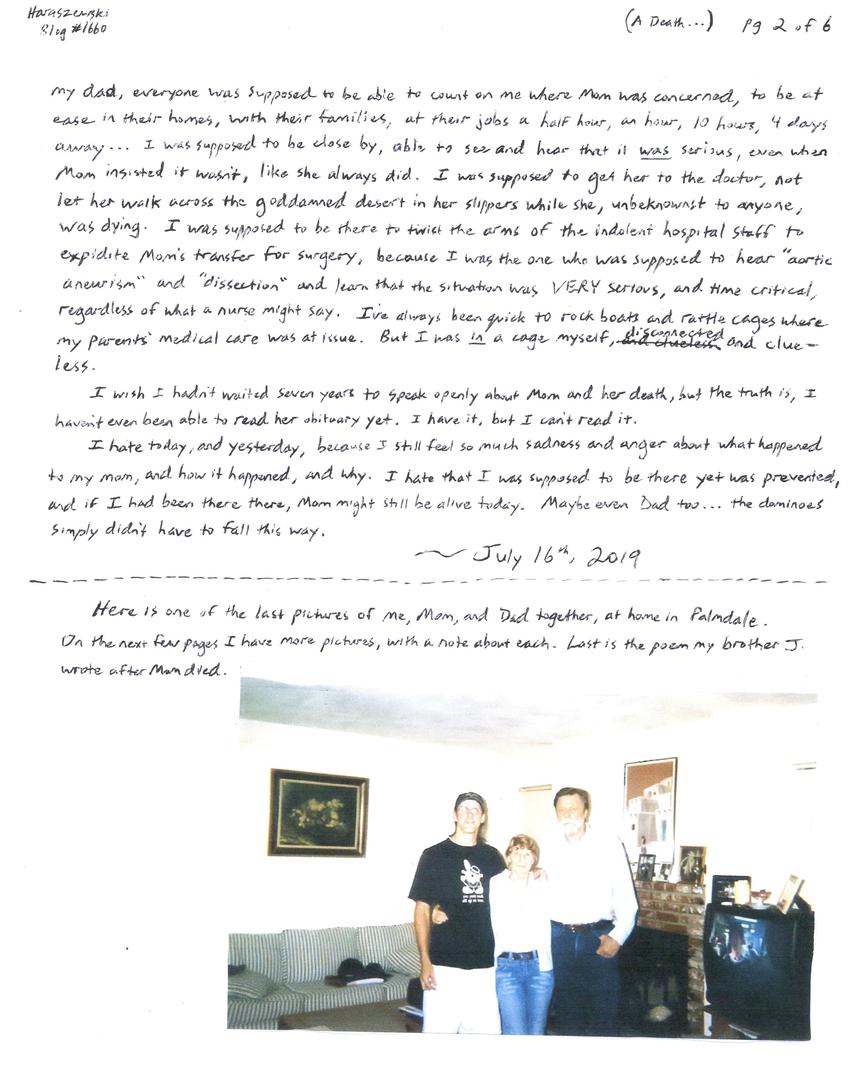 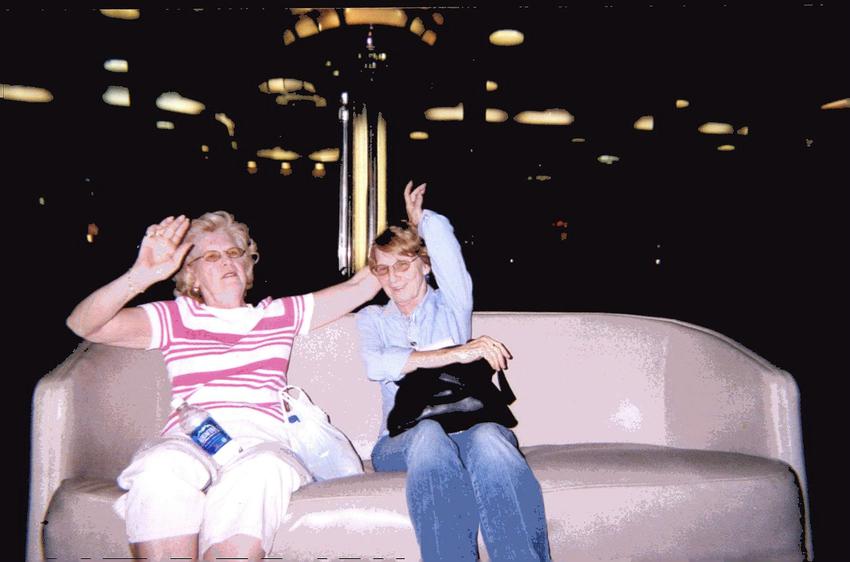 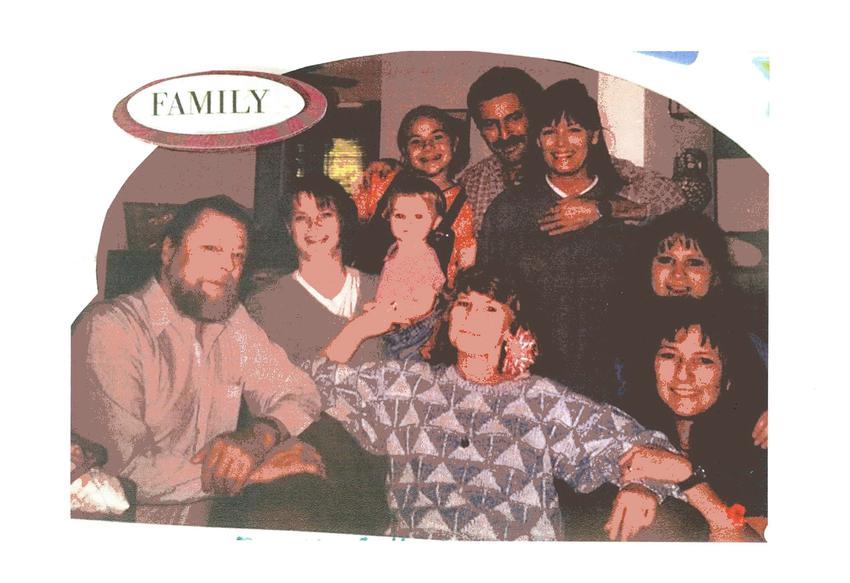 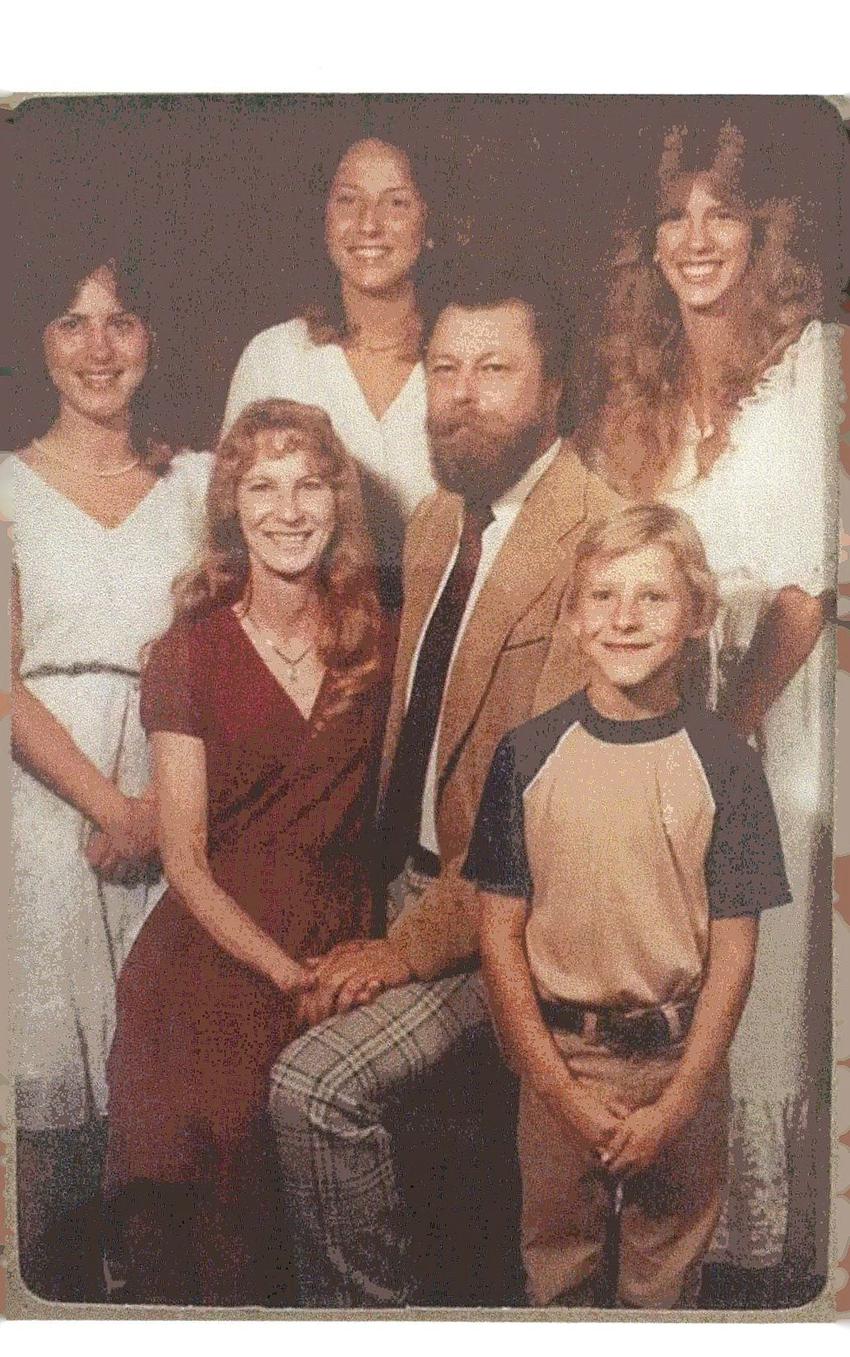 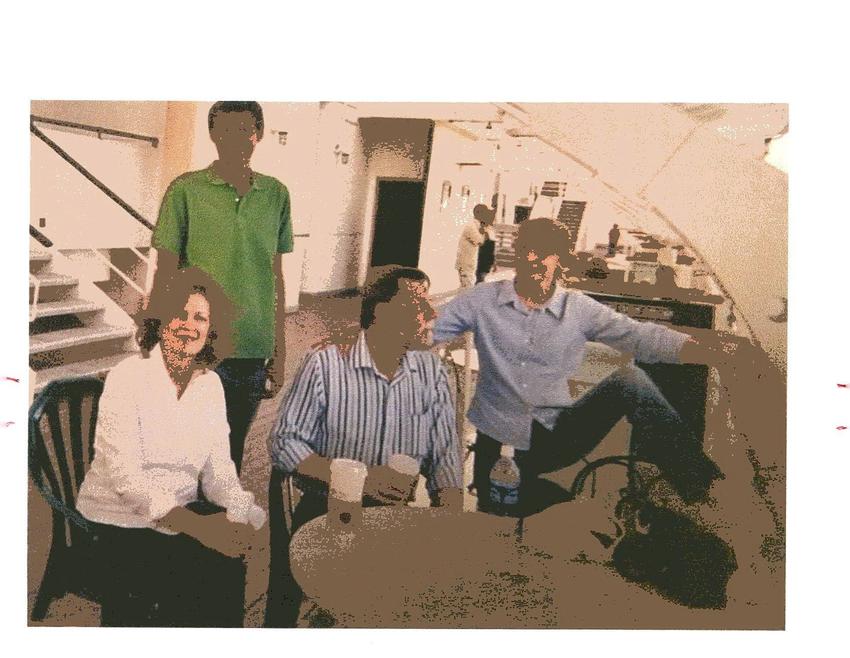 I hate this day. I hate that I haven't said something here, on this day, about this day, a long time ago.

Seven years ago this morning, around 7 AM on a cold hospital table, my mom died while being prepared for a heart surgery she'd never have. She died alone, save for the nurses and doctors. No one was there when she died who loved her or who even knew her. She died after waiting 12 fucking hours to be transported to an LA hospital just 45 minutes away. She died with none of us, her family, even knowing she was dying because only my brother had been nearby when the ambulance finally, FINALLY, took her, and she'd been cracking jokes as the doctors told them both that the situation wasn't exactly deadly serious.

They said her condition was pretty common and the procedure routine. Easy peasy, they said. No worries. So, my brother didn't worry too much.

But he did call our sisters who immediately made plans to see Mom at the hospital, roughly an hour and a half away from them. They hurried, for sure, but they didn't RUSH... After all, Mom wasn't dying. We didn't know she was dying. But she did die, even before my sisters could get there to say hello, or goodbye.

Mom died after walking herself to the hospital—about a 20 minute walk for a normally sprightly 73-year-old lady whose heart had secretly sprung a fatal leak. No one was there to drive her. He daughters were over an hour away in Ventura, and Mom would never have called them for help at 6 PM on a Sunday night anyway. She called her nearest son instead, her eldest, who was across the valley at his girlfriend's house, but, as was her way, she told him not to worry. She decided she could walk, and she did.

Her second son was across the country and her other half, my dad, was 10 hours north working in San Francisco for a week or two. Her third son was in a cage—that's me, the family's pride and joy. Mom and I had just talked a few hours earlier. We'd made plans for a call the next day. But she was dead the next day.

Mom died without anyone getting to say goodbye to her, though my brother came close. He said goodbye, but he didn't know what kind of goodbye he should've been saying. I imagine that must be hard for him, even still. His real goodbye came later in a poem Mom could never see. I'll include it with this post. At least he came close.

I said "goodbye", too, around noon. From a prison phone—an almost routine "I love you" before I casually passed the phone to the next waiting inmate, giving some brief thought to what we'd talk about when I called back tomorrow. I didn't know she was gonna die. My only consolation is that at least our conversation wasn't a bad one. No arguing or yelling, no saying things we both immediately regretted, as we too often did. Our talk was positive that day, the last day. It was happy. Our goodbye was light... so light that I really can't even remember how it went. Breezy. Almost like—like it doesn't even count.

I've always been quick to rock boats and rattle cages where my parents' medical care was at issue. But I was in a cage myself, disconnected and clueless.

I wish I hadn't waited seven years to speak openly about Mom and her death. But the truth is, I haven't even been able to read her obituary yet. I have it, but I can't read it.

I hate today, and yesterday, because I still feel so much sadness and anger about what happened to my mom and how it happened, and why. I hate that I was supposed to be there yet was prevented. If I had been there there, Mom might still be alive today. Maybe even Dad too... the dominoes simply didn't have to fall this way.

Here is one of the last pictures of me, Mom, and Dad together at home in Palmdale. One the next few pages, I have more pictures, with a note about each. Last is the poem my brother J. wrote after Mom died.

Mother, I just want to tell you
It's hard to find words but I'll try
I think of the last time that I held you close to me
And how hard it was saying goodbye

Mother, I'll be your son forever
No matter the miles that keep us apart
Because in my heart we're always together you and me
And think that you've known that right from the start

You've always stood by me, when I found myself lost
And you said everything would work itself out
I found that the pain that I felt was not worth the cost
You've known all along with never a doubt

Mother, you make me so happy
Whenever I'm sad and feeling blue
I give you a call and you bring back sunshine in my life
And I feel so much better after talking to you

Mother, you gave me two sisters
And you gave me a brother and then one more
And a whole other family from that man that you adore
And now I call them my sisters... need I say more

When I think of our family, I get this feeling inside
It's a feeling of love and I'll tell you what's more
When I think how we all love you, my heart fills up with pride
Because each one of us knows what a family is for

Mother, I just want to tell you
It's hard to find words but I'll try
I think of the last time that I held you close to me
And how hard it was saying goodbye
Goodbye... goodbye

Your post really touched my heart. In a world that has held you accountable, the system was not accountable in your mother's death. Take solace in the fact she apparently loved you and you had dealt with whatever issues you had in the past. I hope you can make peace with yourself. As a mother of a son who shows no love or respect for me, I admire you even more. I would have loved to have had a son like you. Peace. Toni
(scanned reply – view as blog post)
uploaded Sept. 16, 2019.  Original (PDF) 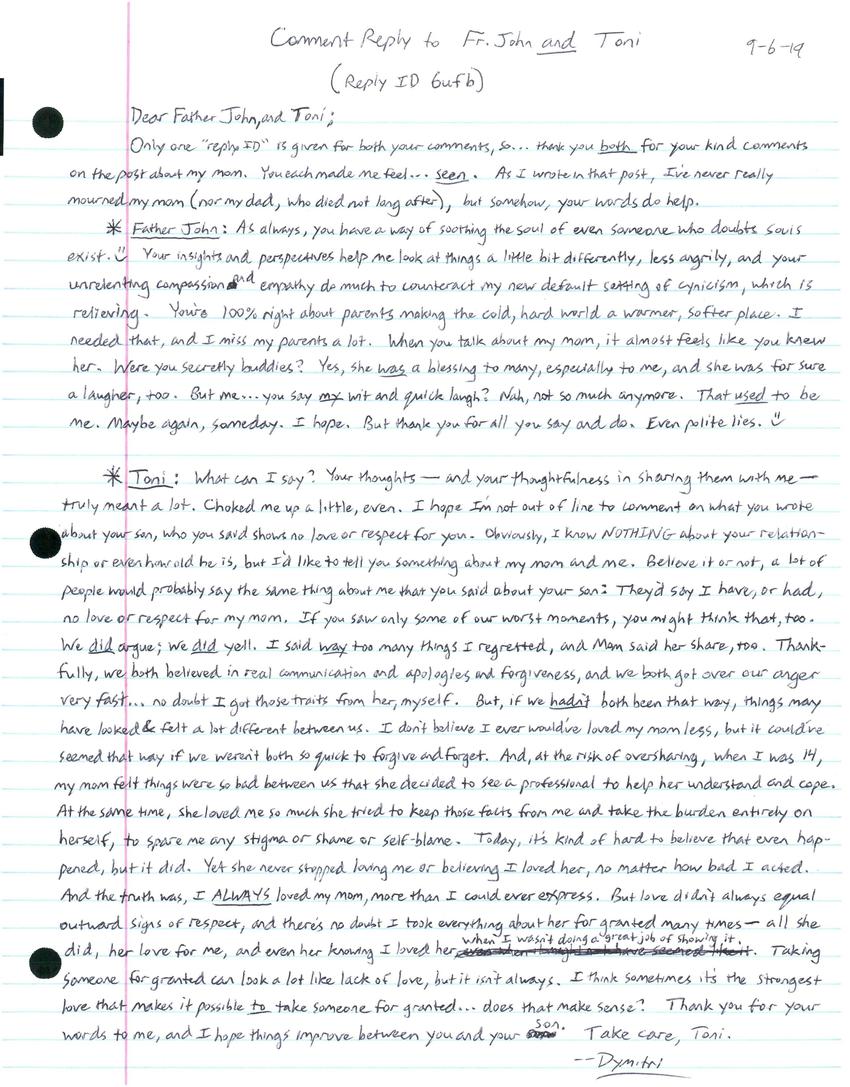