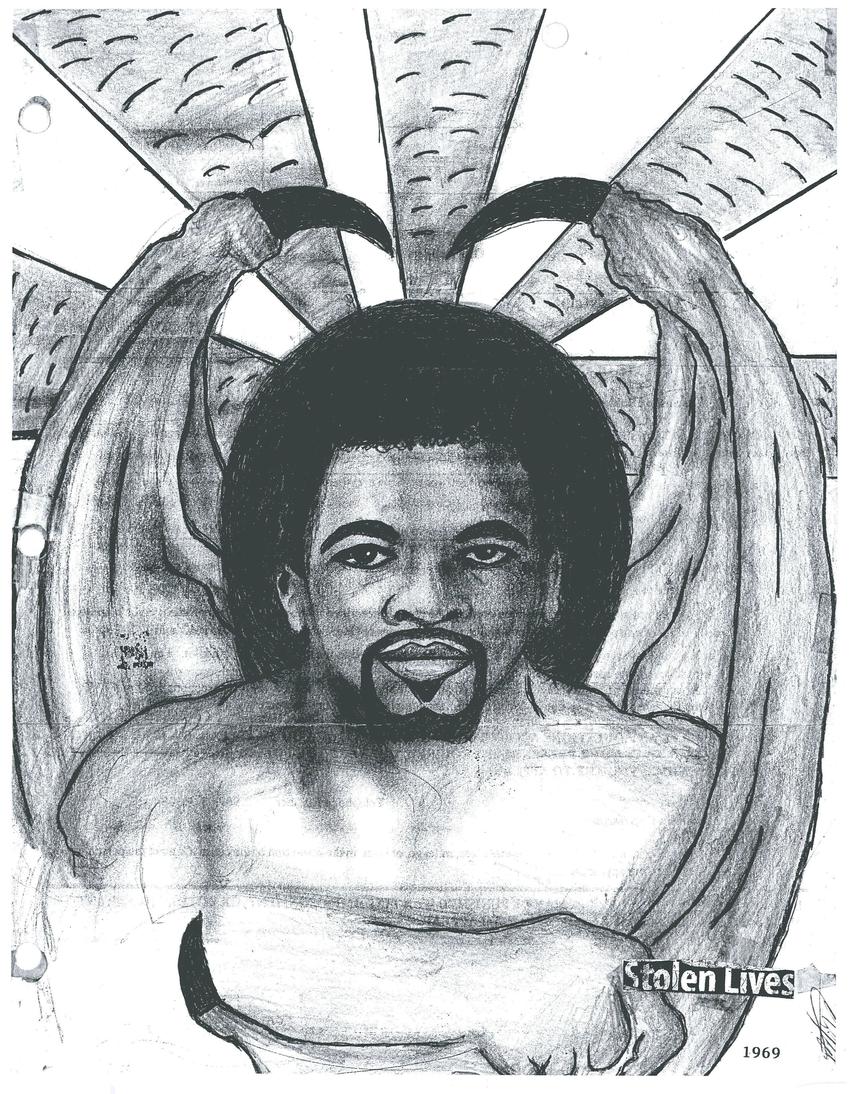 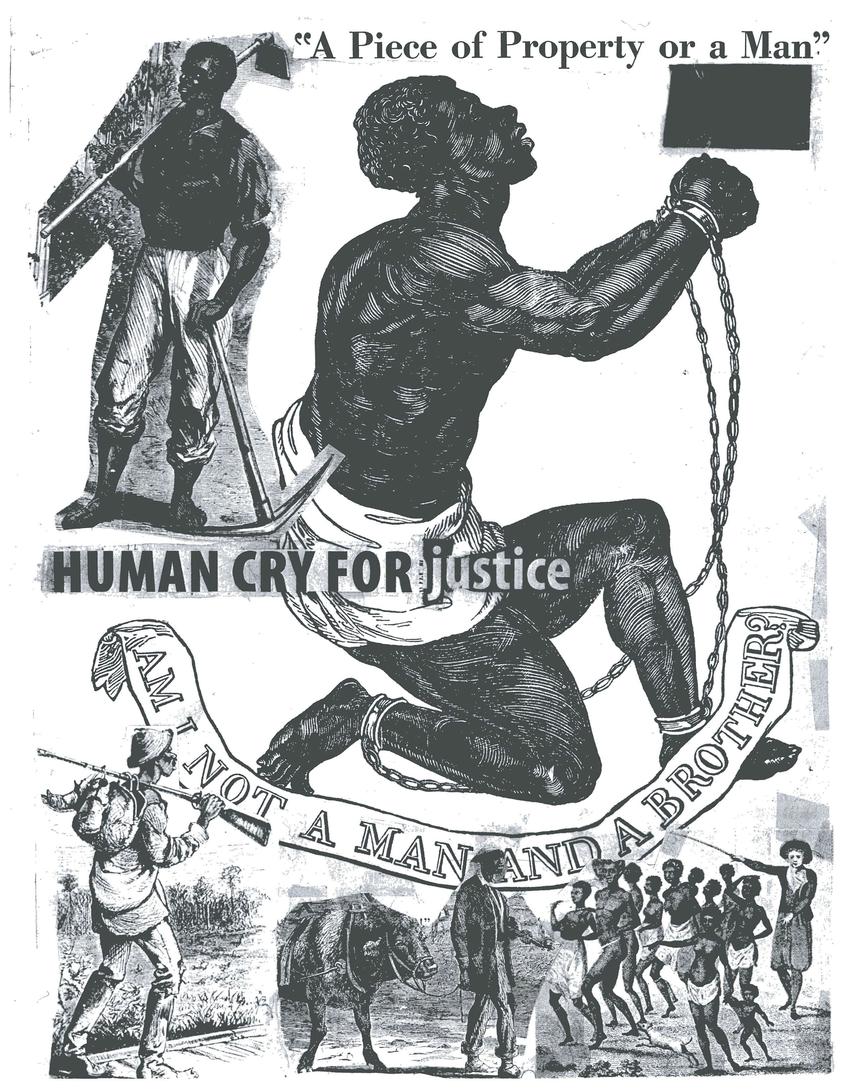 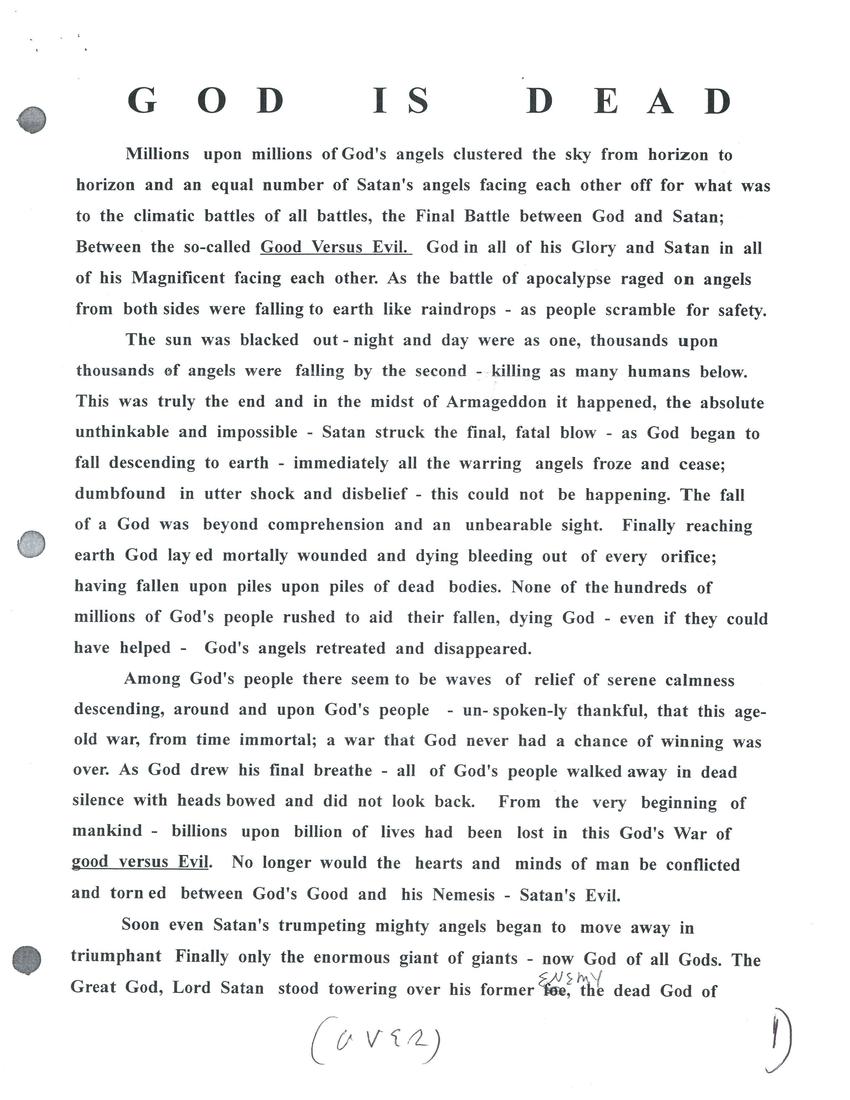 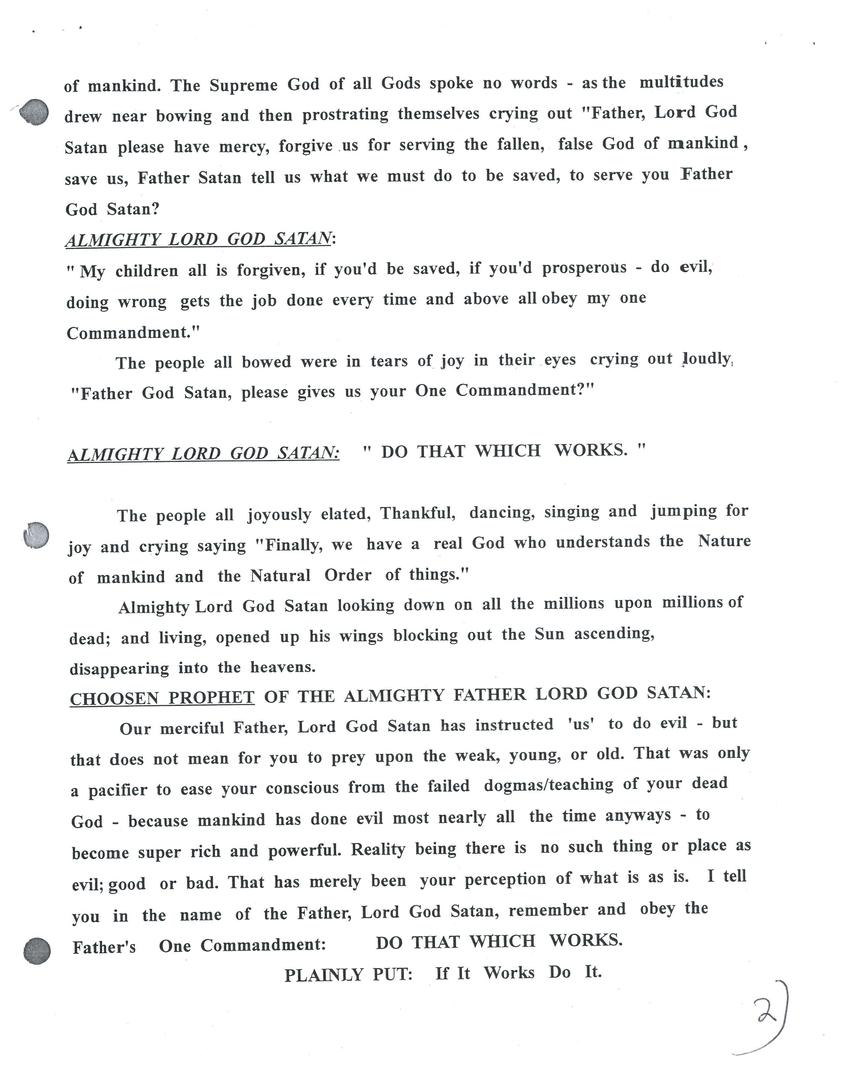 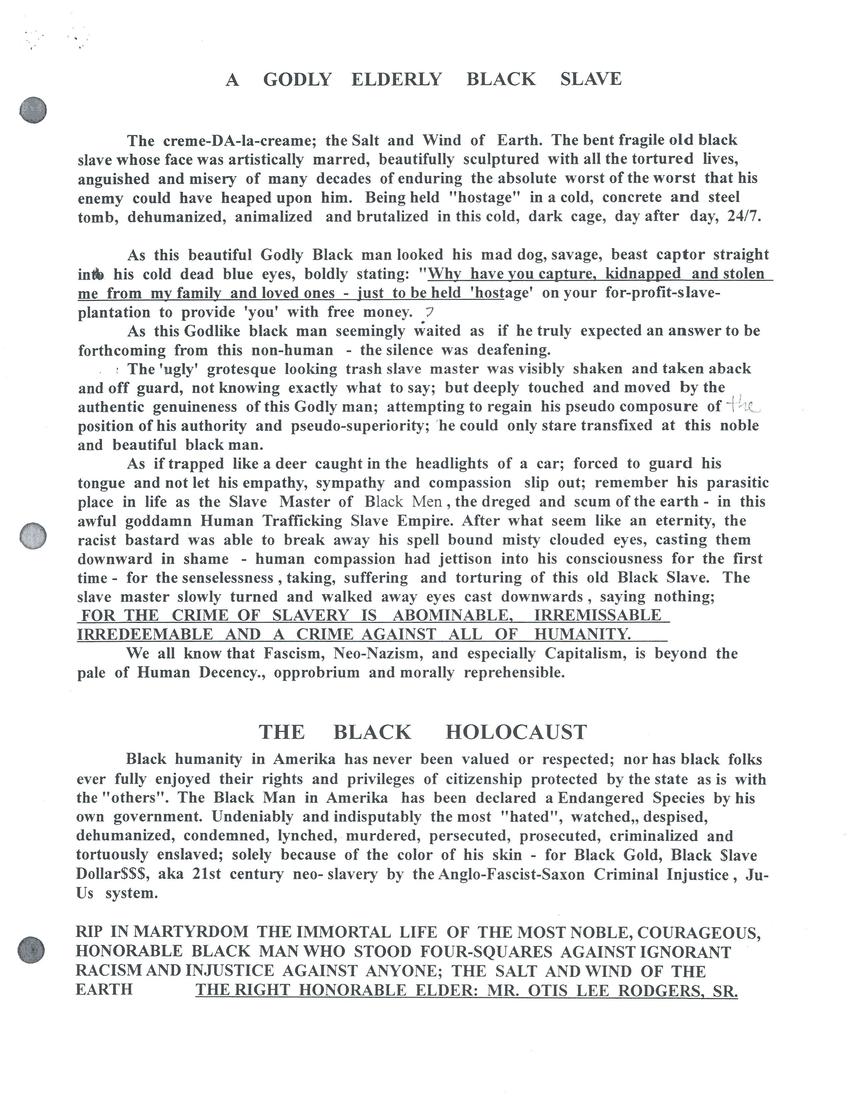 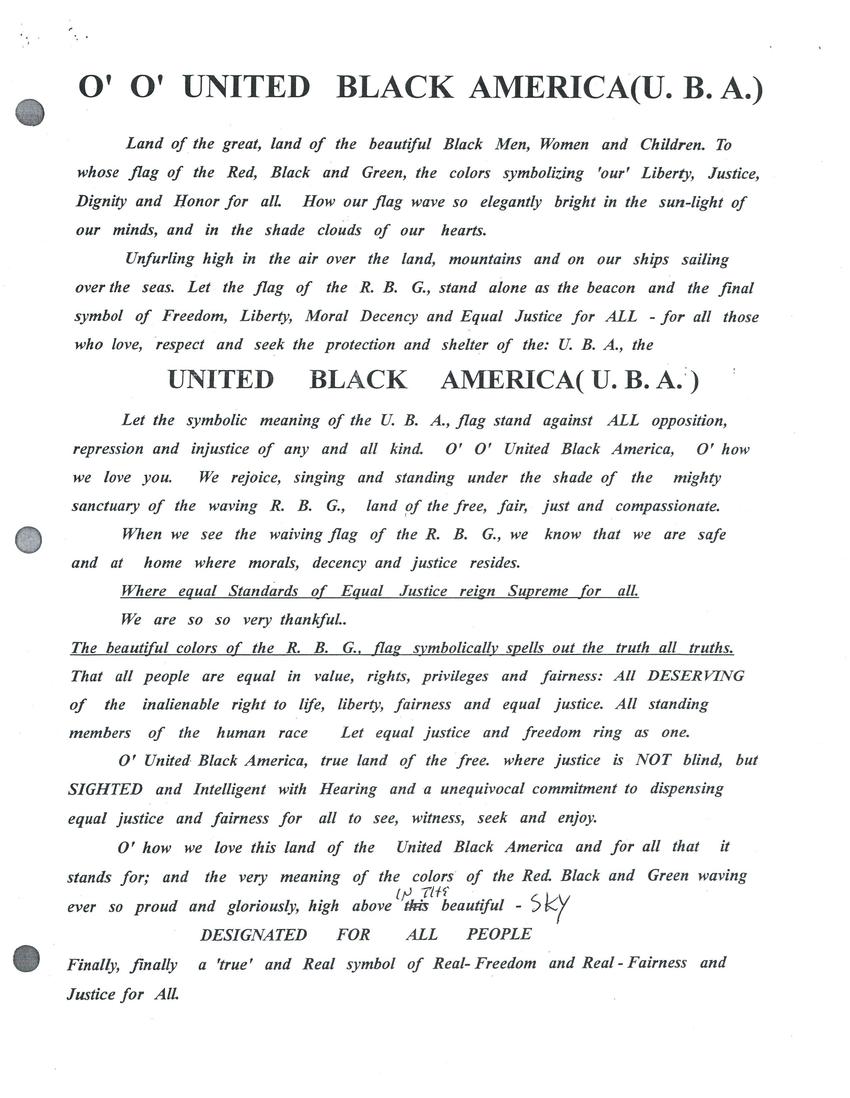 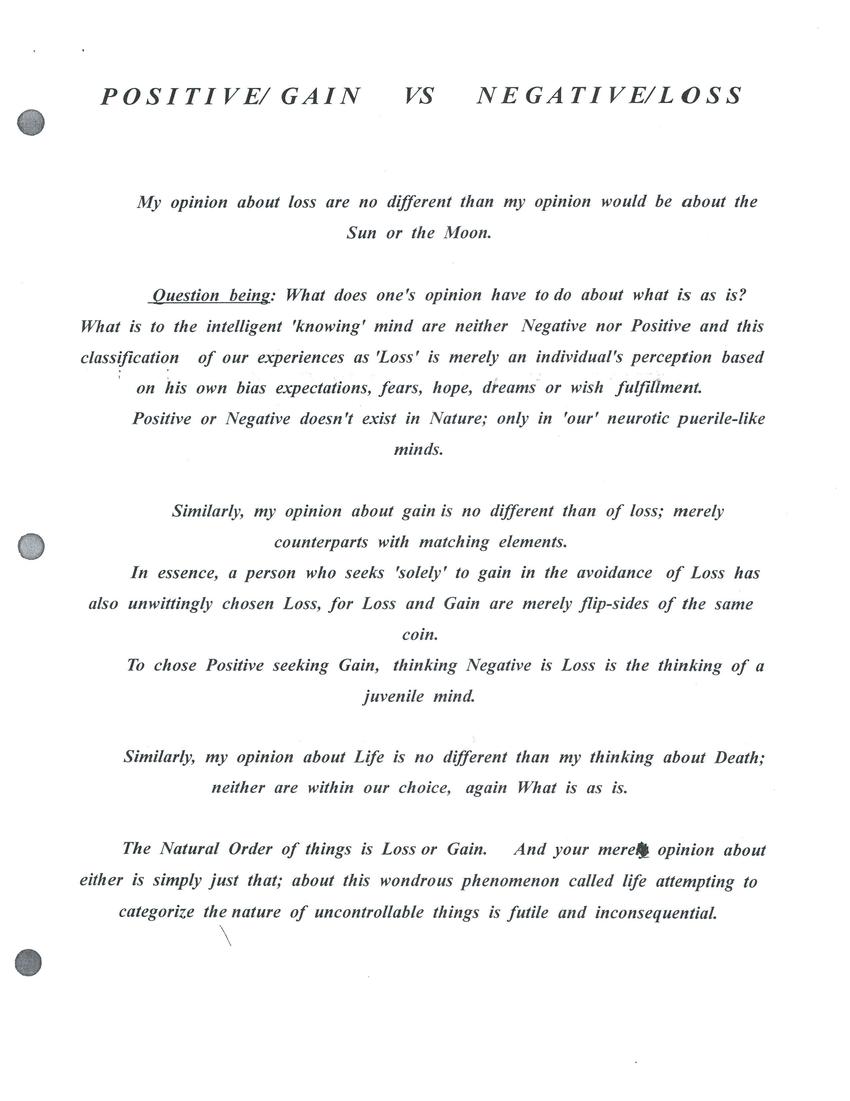 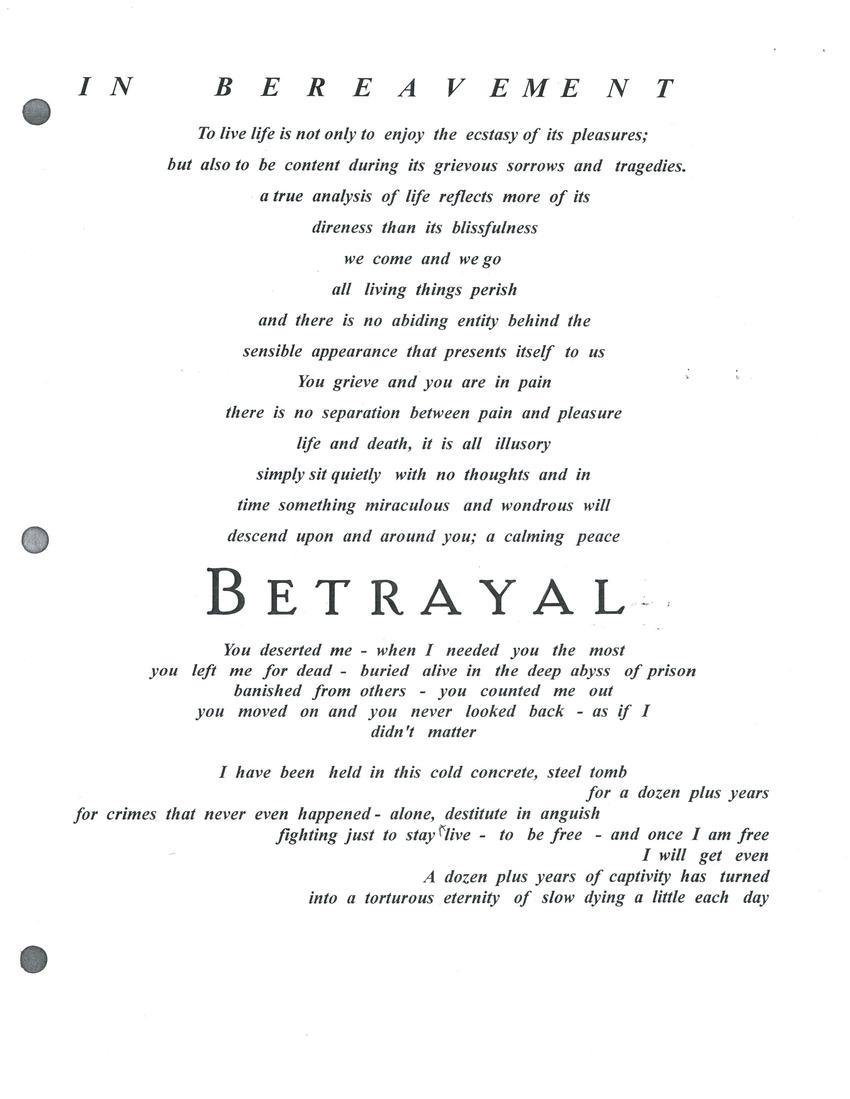 [image of man, "Stolen Lives" in the bottom right corner]

[man in chains on knees, "A Piece of Property or a Man" in top left corner, "HUMAN CRY FOR justice" in the middle, and "AM I NOT A MAN AND A BROTHER?" on the bottom]

Millions upon millions of God's angel clustered the sky from horizon to horizon and an equal number of Satan's angels facing each other off for what was to the climatic battles of all battles, the Final Battle between God and Satan; Between the so-called Good Versus Evil. God in all of his Glory and Satan in all of his Magnificent facing each other. As the battle of apocalypse raged on, angels from both sides were falling to earth like raindrops - as people scramble for safety.

The sun was blacked out - night and day were as one, thousands upon thousands of angels were falling by the second - killing as many humans below. This was truly the end and in the midst of Armageddon it happened, the absolute unthinkable and impossible - Satan struck the final, fatal blow - as God began to fall descending to earth - immediately all the warring angels froze and cease; dumbfound in utter shock and disbelief - this could not be happening. The fall of God was beyond comprehension and an unbearable sight. Finally reaching earth, God laid mortally wounded and dying bleeding out of every orifice; having fallen upon piles of dead bodies. None of the hundreds of millions of God's people rushed to aid their fallen, dying God - even if they could have helped - God's angels retreated and disappeared.

Among God's people there seem to be waves of relief of serene calmness descending, around and upon God's people - un-spokenly thankful, that this age-old war, from time immortal; a war that God never had a chance of winning was over. As God drew his final breath - all of God's people walked away in dead silence with heads bowed and did not look back. From the very beginning of mankind - billions upon billions of lives had been lost in this God's War of Good Versus Evil. No longer would the hearts and minds of man be conflicted and torn between God's Good and his Nemesis - Satan's Evil.

Soon even Satan's trumpeting mighty angels began to move away in triumphant. Finally only the enormous giant of giants - now God of all Gods. The Great God, Lord Satan stood towering over his former enemy, the dead God of mankind. The Supreme God of all Gods spoke no words - as the multitudes drew near bowing and then prostrating themselves crying out "Father, Lord God Satan please have mercy, forgive us for serving the fallen, false God or mankind, save us, Father Satan tell us what we must do to be saved, to serve you Father God Satan?

ALMIGHTY LORD GOD SATAN:
"My children all is forgiven, if you'd be saved, if you'd be prosperous - do evil, doing wrong gets the job done very time and above all obey my one Commandment."

The people all bowed were in tears of joy in their eyes crying out loudly, "Father God Satan, please give us your One Commandment?"

ALMIGHTY LORD GOD SATAN: "DO THAT WHICH WORKS."

The people all joyously elated, Thankful, dancing, singing and jumping for joy and crying saying "Finally, we have a real God who understands the Nature of mankind and the Natural Order of things."

Almighty Lord God Satan looking down on all the millions upon millions of dead; and living, opened up his wings blocking out the Sun ascending, disappearing into the heavens.

CHOOSEN PROPHET OF THE ALMIGHTY FATHER LORD GOD SATAN:
Our merciful Father, Lord God Satan has instructed 'us' to do evil - but that does not mean for you to prey upon the weak, young, or old. That was only a pacifier to ease your concise from the failed dogmas/teaching of your dead God - because mankind has done evil most nearly all the time anyways - to become super rich and powerful. Reality being there is no such thing or place as evil; good or bad. That has merely been your perception of what is as is. I tell you in the name of the Father, Lord God Satan, remember and obey the Father's One Commandment: DO THAT WHICH WORKS.

PLAINLY PUT: If It Works Do It.

The creme-DA-le-creme; the Salt and Wind of Earth. The bent fragile old black slave whose face was artistically marred, beautifully sculptured with all the tortured lives, anguished and misery of many decades of enduring the absolute worst of the worst that his enemy could have heaped upon him. Being held "hostage" in a cold, concrete and steel tomb, dehumanized, animalized and brutalized in they cold, dark cage, day after day, 24/7.