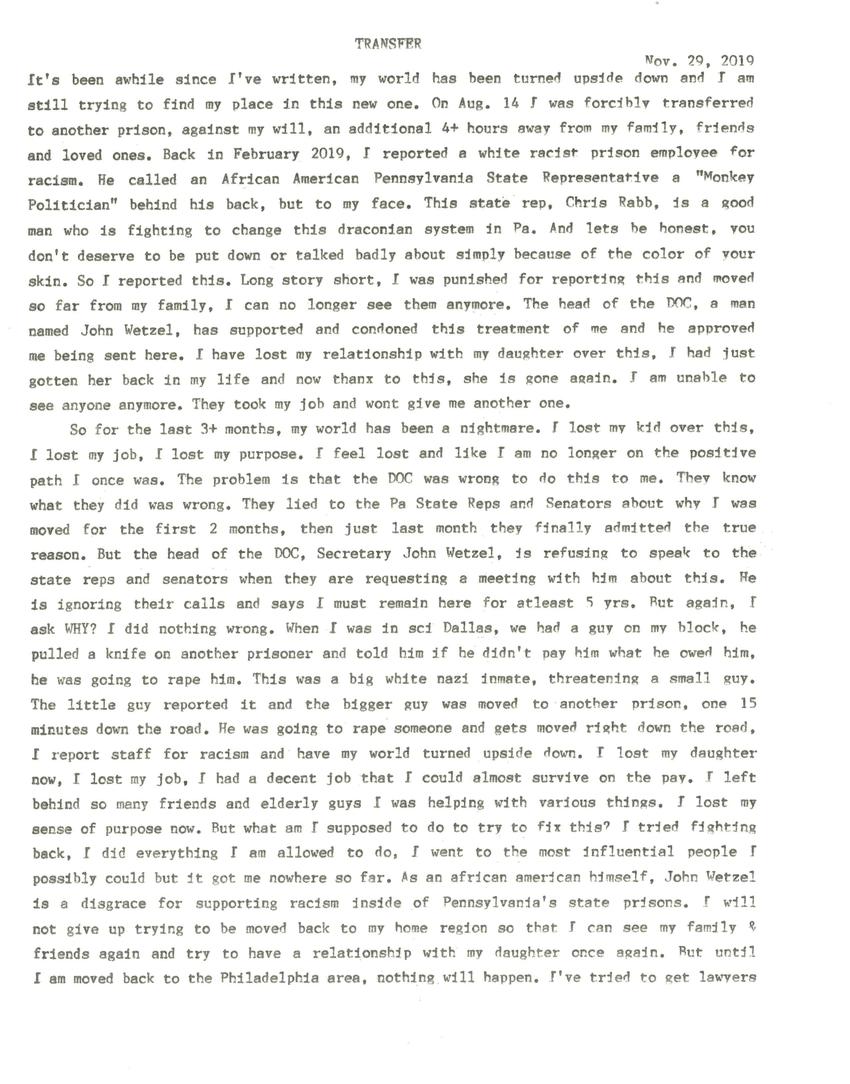 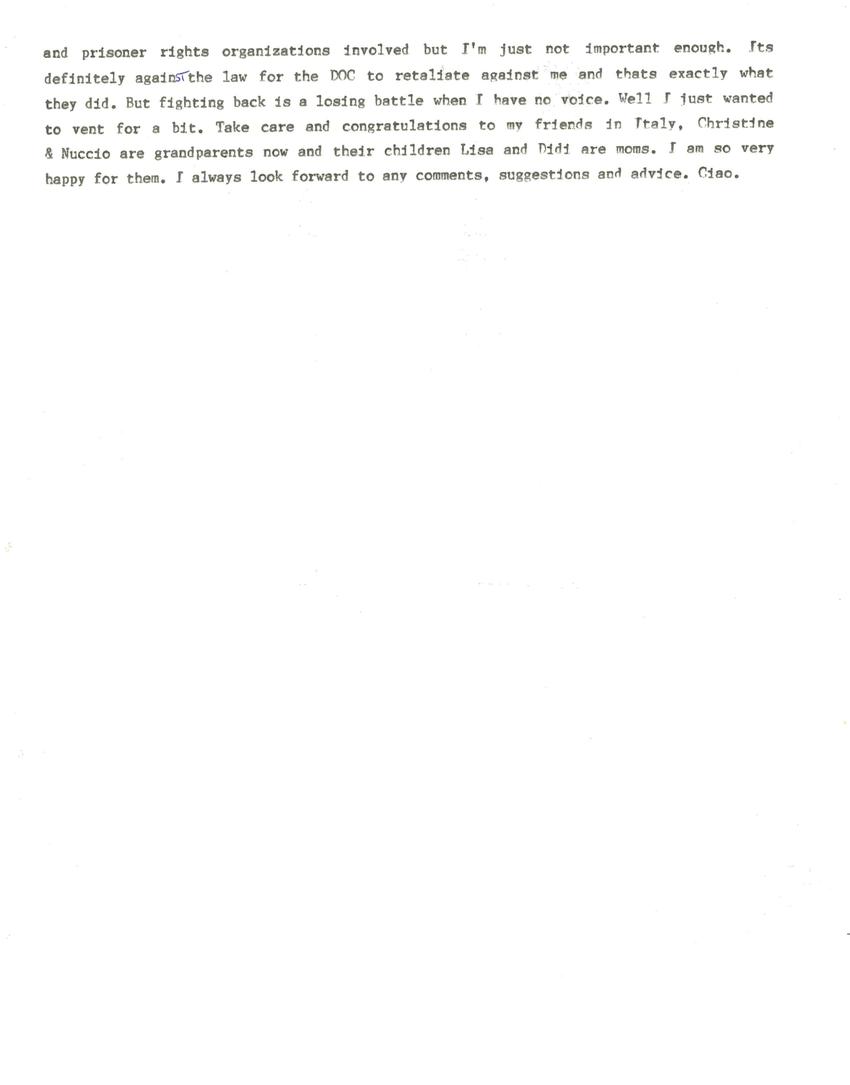 It's been awhile since I've written. My world has been turned upside-down and I am still trying to find my place in this new one.

On August 14 I was forcibly transferred to another prison against my will. An additional four+ hours away from my family, friends, and loved ones. Back in February 2019, I reported a white racist prison employee for racism. He called an African American Pennsylvania State Representative a "monkey politician" behind his back and to my face.

This state rep, Christ Rabb, is a good man who is fighting to change this draconian system in PA. And let's be honest: you don't deserve to be put down or talked badly about simply because of the color of your skin.

So, I reported this. Long story short, I was punished for reporting this and moved so far from my family I can no longer see them anymore. The head of DOC, a man named John Wetzel, has supported and condemned this treatment of me. He approved me being sent here.

I lost my relationship with my daughter over this. I had just gotten her back into my life and now, thanks to this, she is gone again. I am unable to see anyone anymore. They took my job and won't give me another one. So, for the last three+ months, my world has been a nightmare. I lost my kid over this, I lost my job, I lost my purpose. I feel lost, like I am no longer on the positive path I once was.

The problem is DOC is wrong to do this to me. They know what they did was wrong. They lied to the PA state reps and senators about why I was moved for the first two months. Then just last month, they finally admitted the true reason. But the head of DOC, Secretary John Wetzel, is refusing to speak to the state reps and senators when they are requesting a meeting about this. He is ignoring their calls and says I must remain here for at least five years.

But again, I ask WHY? I did nothing wrong.

When I was in SCI Dallas, we had a guy on my block. He pulled a knife on another prisoner and told him if he didn't pay him what he owed him, he was going to rape him. This was a big white Nazi inmate threatening a small guy. The little guy reported it and the bigger guy was moved to another prison, one 15 minutes down the road. He was going to rape someone and gets moved right down the road.

I report staff for racism and have my world turned upside-down. I lost my daughter, I lost my job. I had a decent job that I could almost survive on the pay. I left behind so many friends and elderly guys I was helping with various things. I lost my sense of purpose now.

But what am I supposed to do to try to fix this? I tried fighting back, I did everything I was allowed to do. I went to be the most influential people I possibly could. But it got me nowhere so far.

As an African American himself, John Wetzel is a disgrace for supporting racism inside Pennsylvania's state prisons.

I will not give up trying to be moved back to my home region so that I can see my family and friends again, and try to have a relationship with my daughter once again. But until I move back to the Philadelphia area, nothing will happen. I've tried to get lawyers and prisoner rights organizations involved, but I'm just not important enough. It's definitely against the law for DOC to retaliate against me, and that's exactly what they did. But fighting back is a losing battle when I have no voice.

Well, I just wanted to vent for a bit. Take care, and congratulations to my friends in Italy. Christine and Nuccio are grandparents now, and their children Lisa and Didi are moms. I am so very happy for them.

I always look forward to any comments, suggestions, and advice. Ciao.