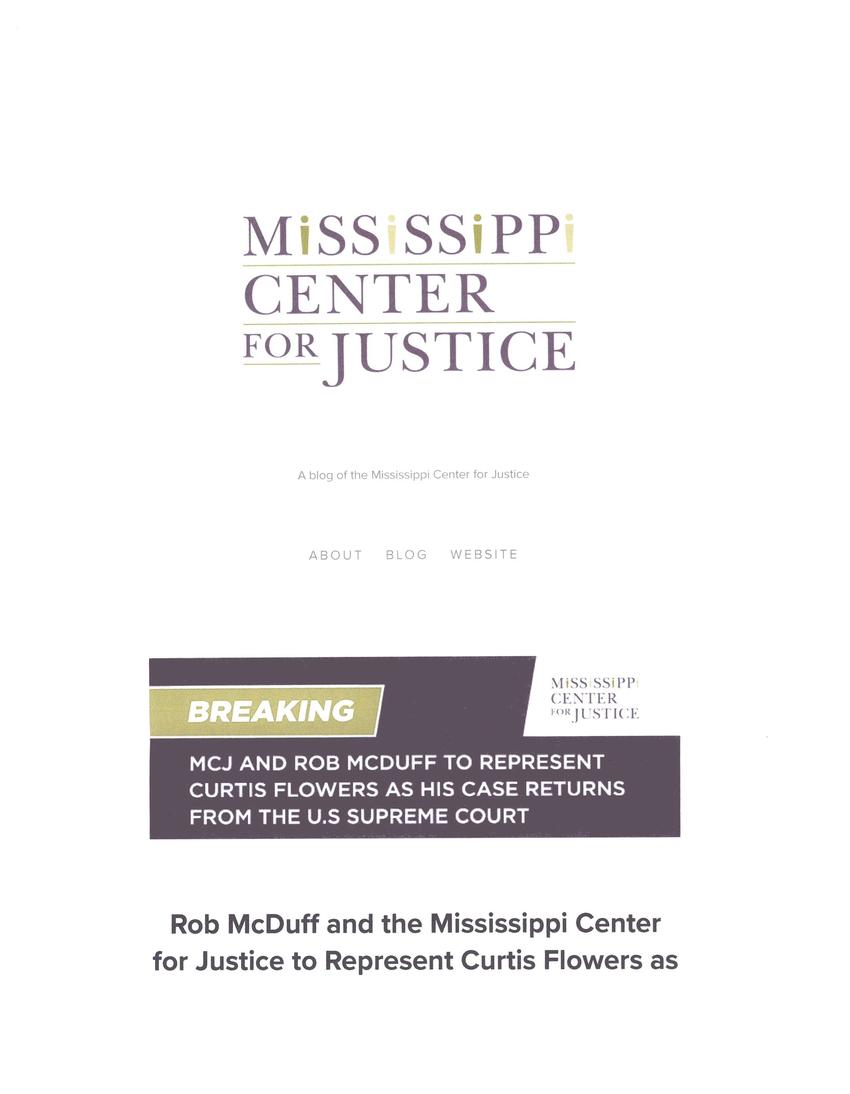 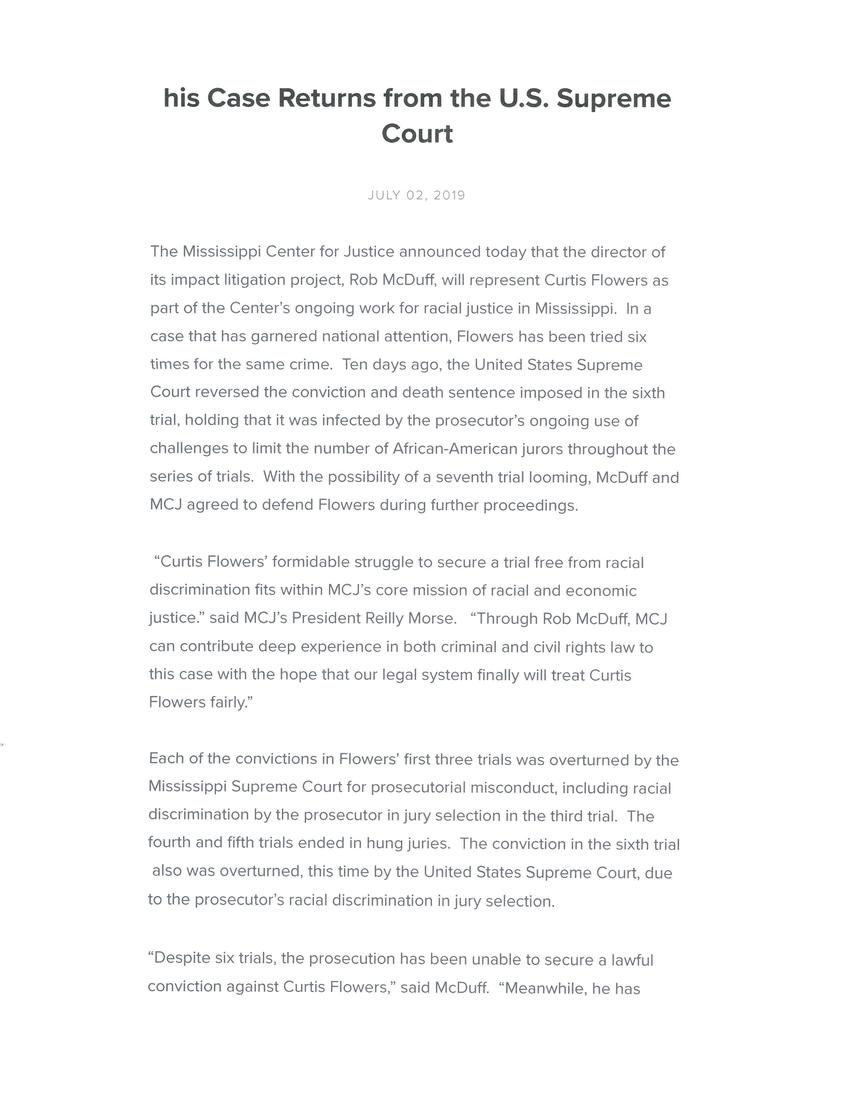 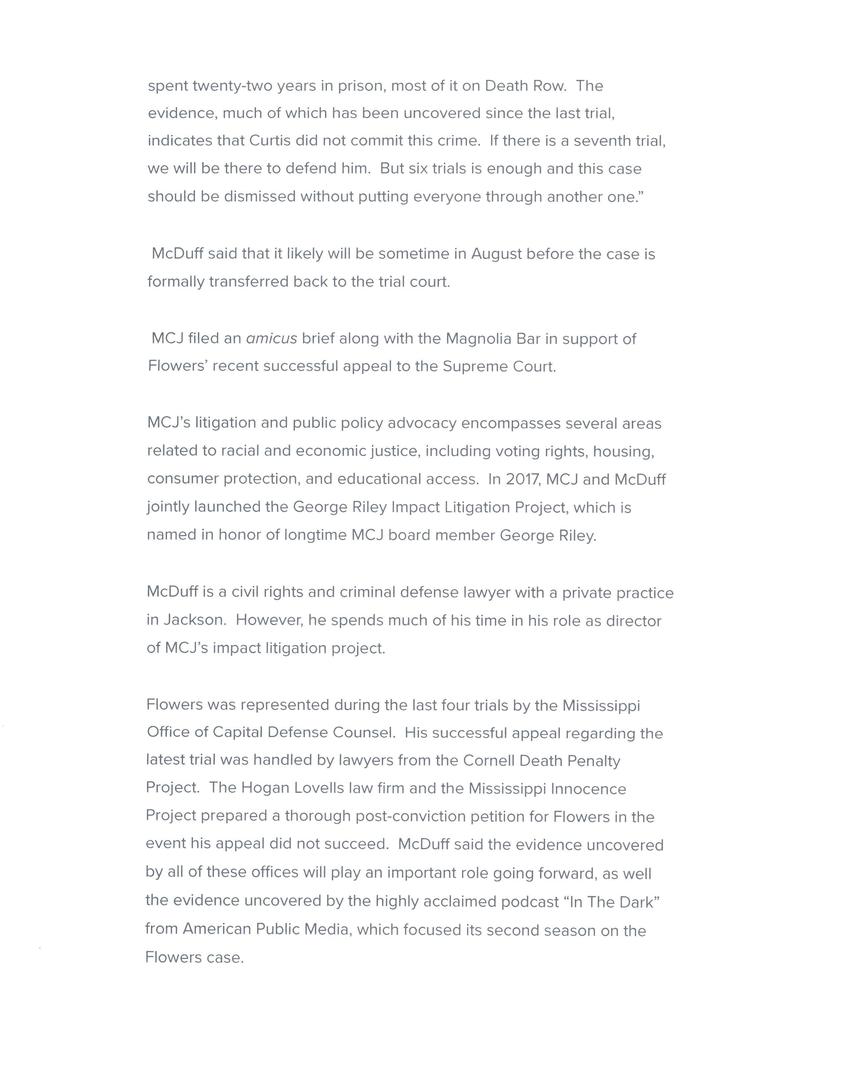 Rob McDuff and the Mississippi Center for Justice to Represent Curtis Flowers as his Case Returns from the U.S. Supreme Court
JULY 02, 2019

The Mississippi Center for Justice announced today that the director of its impact litigation project, Rob McDuff, will represent Curtis Flowers as part of the Center’s ongoing work for racial justice in Mississippi. In a case that has garnered national attention, Flowers has been tried six times for the same crime. Ten days ago, the United States Supreme Court reversed the conviction and death sentence imposed in the sixth trial, holding that it was infected by the prosecutor’s ongoing use of challenges to limit the number of African-American jurors throughout the series of trials. With the possibility of a seventh trial looming, McDuff and MCJ agreed to defend Flowers during further proceedings.

“Curtis Flowers’ formidable struggle to secure a trial free from racial discrimination fits within MCJ’s core mission of racial and economic justice.” said MCJ’s President Reilly Morse. “Through Rob McDuff, MCJ can contribute deep experience in both criminal and civil rights law to this case with the hope that our legal system finally will treat Curtis Flowers fairly.”

Each of the convictions in Flowers’ first three trials was overturned by the Mississippi Supreme Court for prosecutorial misconduct, including racial discrimination by the prosecutor in jury selection in the third trial. The fourth and fifth trials ended in hung juries. The conviction in the sixth trial also was overturned, this time by the United States Supreme Court, due to the prosecutor’s racial discrimination in jury selection.

“Despite six trials, the prosecution has been unable to secure a lawful conviction against Curtis Flowers,” said McDuff. “Meanwhile, he has spent twenty-two years in prison, most of it on Death Row. The evidence, much of which has been uncovered since the last trial, indicates that Curtis did not commit this crime. If there is a seventh trial, we will be there to defend him. But six trials is enough and this case should be dismissed without putting everyone through another one.”

McDuff said that it likely will be sometime in August before the case is formally transferred back to the trial court.

MCJ filed an amicus brief along with the Magnolia Bar in support of Flowers’ recent successful appeal to the Supreme Court.

McDuff is a civil rights and criminal defense lawyer with a private practice in Jackson. However, he spends much of his time in his role as director of MCJ’s impact litigation project.

Flowers was represented during the last four trials by the Mississippi Office of Capital Defense Counsel. His successful appeal regarding the latest trial was handled by lawyers from the Cornell Death Penalty Project. The Hogan Lovells law firm and the Mississippi Innocence Project prepared a thorough post-conviction petition for Flowers in the event his appeal did not succeed. McDuff said the evidence uncovered by all of these offices will play an important role going forward, as well the evidence uncovered by the highly acclaimed podcast “In The Dark” from American Public Media, which focused its second season on the Flowers case.