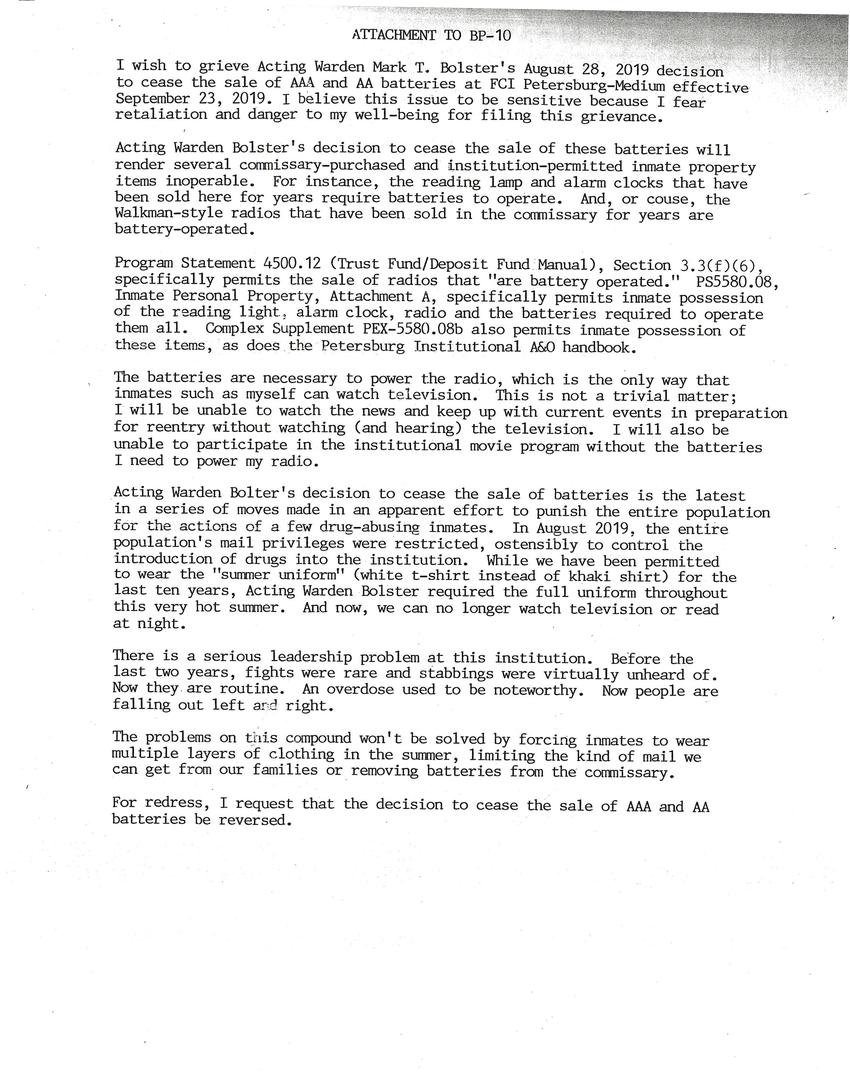 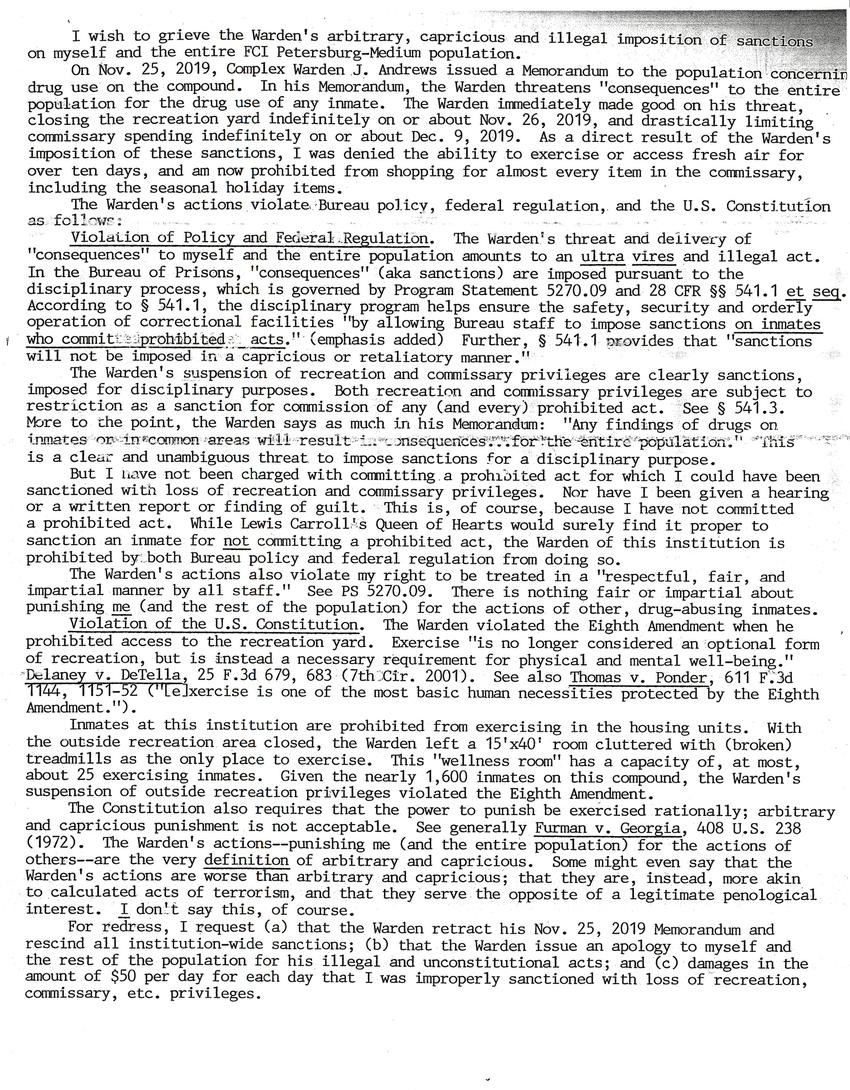 I wish to grieve Acting Warden Mark T. Bolster's August 28, 2019 decision to cease the sale of AAA and AA batteries at FCI Petersburg-Medium effective September 23, 2019. I believe this issue to be sensitive because I fear retaliation and danger to my well-being for filing this grievance.

Acting Water Bolster's decision to crease the sale of these batteries will render several commissary-purchased and institution-permitted inmate property items inoperable. For instance, the reading lamp and alarm clocks that have been sold here for years require batteries to operate. And, or couse, the Walkman-style radios that have been sold in the commissary for years are battery-operated.

The batteries are necessary to power the radio, which is the only way that inmates such as myself can watch television. This is not a trivial matter; I will be unable to watch the news and keep up with current events in preparation for reentry without watching (and hearing) the television. I will also be unable to participate in the institutional movie program without the batteries I need to power my radio.

Acting Warden Bolter's decision to cease the sale of batteries is the latest in a series of moves made in an apparent effort to punish the entire population for the actions of a few drug-abusing inmates. In August 2019, the entire population's mail privileges were restricted, ostensibly to control the introduction of drugs into the institution. While we have been permitted to wear the "summer uniform" (white t-shirt instead of khaki shirt) for the last ten year, Acting Warden Bolster required the full uniform throughout this very hot summer. And now, we can no longer watch television or read at night.

There is a serious leadership problem at this institution. Before the last two years, fights were rare and stabbings were virtually unheard of. Now they are routine. An overdose used to be noteworthy. Now people are falling out left and right.

The problems on this compound won't be solved by forcing inmates to wear multiple layers of clothing in the summer, limiting the kind of mail we can get from our families or removing batteries from the commissary.

For redress, I request that the decision to cease the sale of AAA and AA batteries be reversed.

I wish to grieve the Warden's arbitrary, capricious and illegal imposition of sanctions on myself and the entire FCI Petersburg-Medium population.
On Nov. 25, 2019, Complex Warden J. Andrews issued a Memorandum to the population concerning drug use on the compound. In his memorandum, the Warden threatens "consequences" to the entire population for the drug use of any inmate. The Warden threatens "consequences" to the entire population for drug use of any inmate. The Warden immediately made good on his threat, closing the recreation yard indefinitely on or about Nov. 26, 2019, and drastically limiting commissary spending indefinitely or on about Dec. 9, 2019. As a direct result of the Warden's imposition of these sanctions, I was denied the ability to exercise or access fresh air for over ten days, and am now prohibited from shopping for almost every item in the commissary, including the seasonal holiday items.
The Warden's actions violate Bureau policy, federal regulation, and the U.S. Constitution as follows:
Violation of Policy and Federal Regulation. The Warden's threat and delivery of "consequences" to myself and the entire population amounts to an ultra vires and illegal act.
In the Bureau of Prisons, "consequences" (aka sanctions) are imposed pursuant to the disciplinary process, which is governed by Program Statement 5270.09 and 28 CFR §§ 541.1 et seq. operation of correctional facilities "by allowing Bureau staff to impose sanctions on inmates who commit prohibited acts." (emphasis added) Further, § 541.1 provides that "sanctions will not be imposed in a capricious or retaliatory manner."
The Warden's suspension of recreation and commissary privileges are subject to restriction as a sanction for commission of any (and every) prohibited act. See § 541.3. More to the point, the Warden says much in his Memorandum: "Any findings of drugs on inmates or in common areas will results in consequences...for the entire population." This is a clear and unambiguous threat to impose sanctions for a disciplinary purpose.
But I have not been charged with committing a prohibited act for which I could have been sanctioned with loss of recreation and commissary privileges. Nor have I been given a hearing or a written report or finding of guilt. This is, of course, because I have not committed a prohibited act. While Lewis Carroll's Queen of Hearts would surely find it proper to prohibited by both Bureau policy and federal regulation from doing so.
The Warden's actions also violate my right to be treated in a "respectful, fair, and punishing me (and the rest of the population) for the actions of other, drug-abusing inmates.
Violation of the U.S. Constitution. The Warden violated the Eighth Amendment when he prohibited access to the recreation yard. Exercise "is no longer considered an optional form of recreation, but is instead a necessary requirement for physical and mental well-being." Delaney v. DeTella, 25 F.3d 679, 683 (7th Cir. 2001). See also Thomas v. Ponder, 611 F.3d 1144, 1151-52 ("Le]xercise is one of the of the most basic human necessities protected by Eighth Amendment.").
Inmates at this institution are prohibited from exercising in the housing units. With the outside recreation area closed, the Warden left a 15'x40' room cluttered with (broken) treadmills as the only place to exercise. This "wellness room" has a capacity of, at most, about 25 exercising inmates. Given the nearly 1,600 inmates on this compound, the Warden's suspension of outside recreation privileges violated the Amendment.
The constitution also requires that the power to punish be exercised rationally; arbitrary and capricious punishment is not acceptable. See generally Furman v. Georgia, 408 U.S. 238 (1972). The Warden's actions--punishing me (and the entire population) for the actions of others--are the very definition of arbitrary and capricious. Some might even say that the Warden's actions are worse than arbitrary and capricious. Some might even say that the Warden's actions are worse than arbitrary and capricious. that they are, instead, more akin to calculated acts of terrorism, and that they serve the opposite of a legitimate penological interest. I don't say this, of course.
For redress, I request (a) that the Warden retract his Nov. 25, 2019 Memorandum and rescind all institution-wide sanctions; (b) that the Warden issue an apology to myself and the rest of the population for his illegal and unconstitutional acts; and (c) damages in the amount of $50 per day for each day that I was improperly sanctioned with loss of recreation, commissary, etc. privileges.

Thanks for writing! I finished the transcription for your post.
(scanned reply – view as blog post)
uploaded April 2, 2021.  Original (PDF) 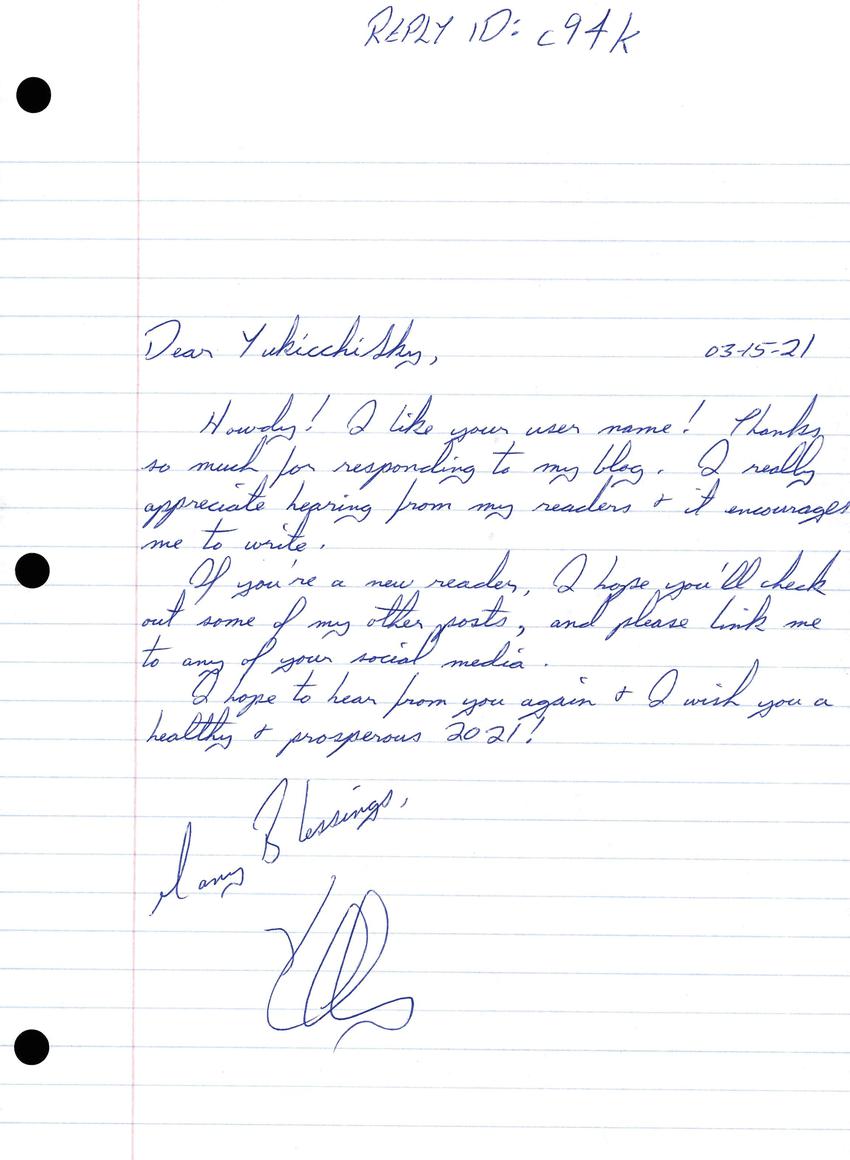