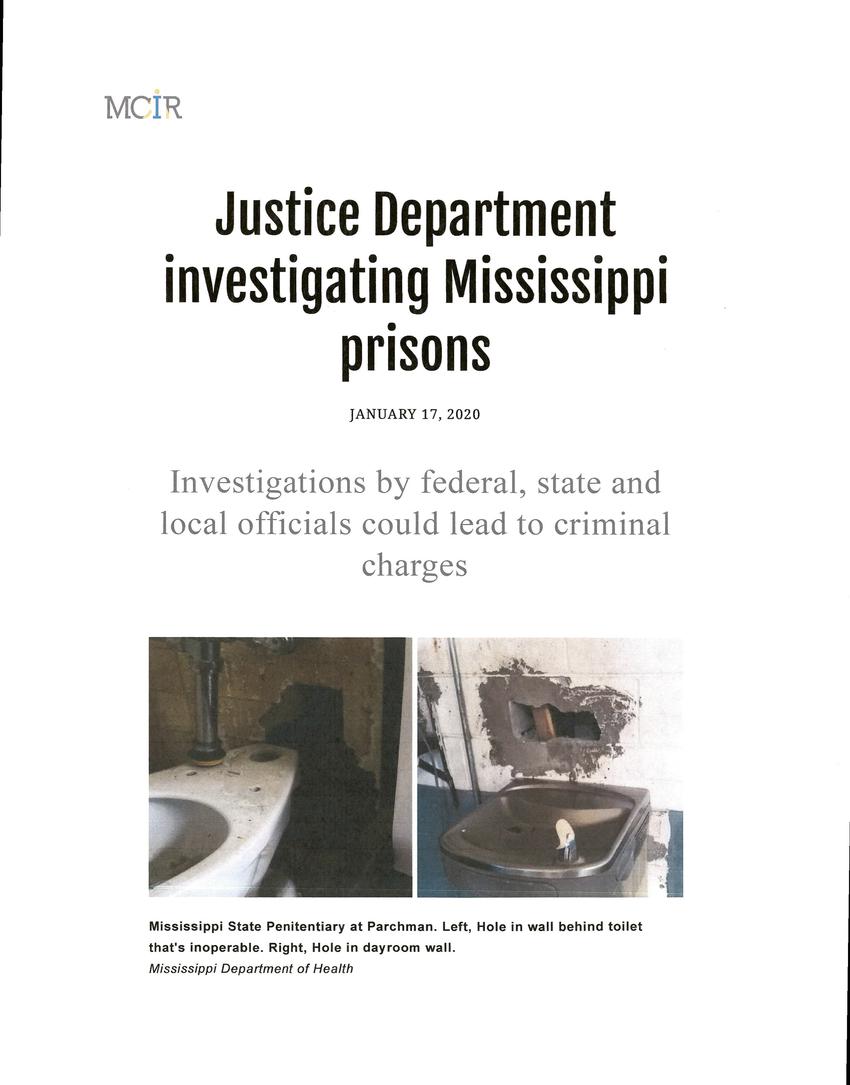 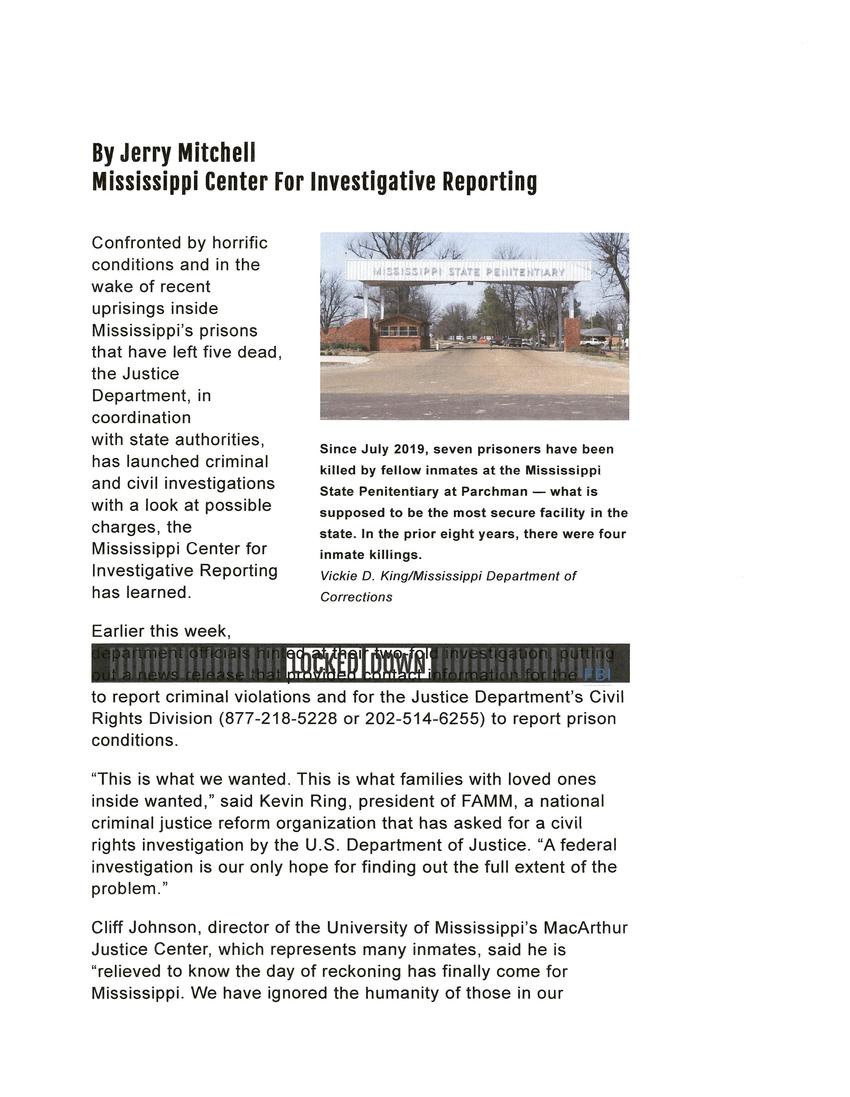 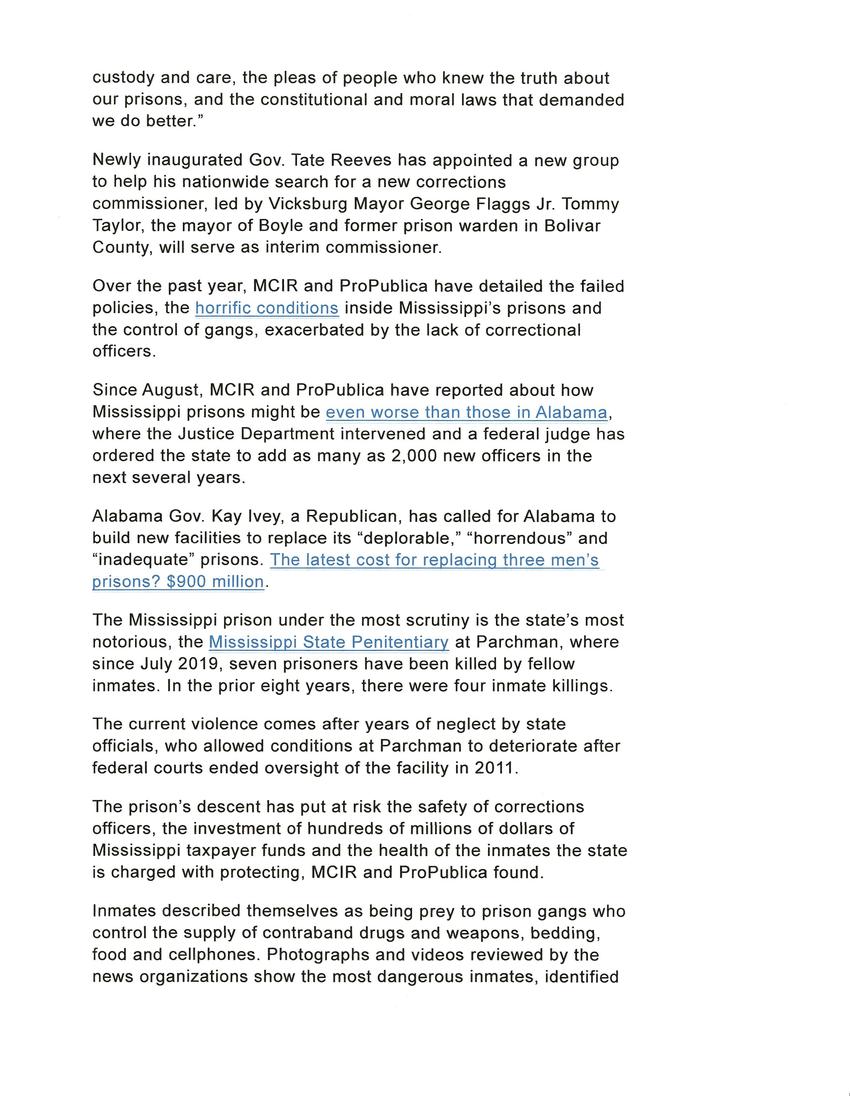 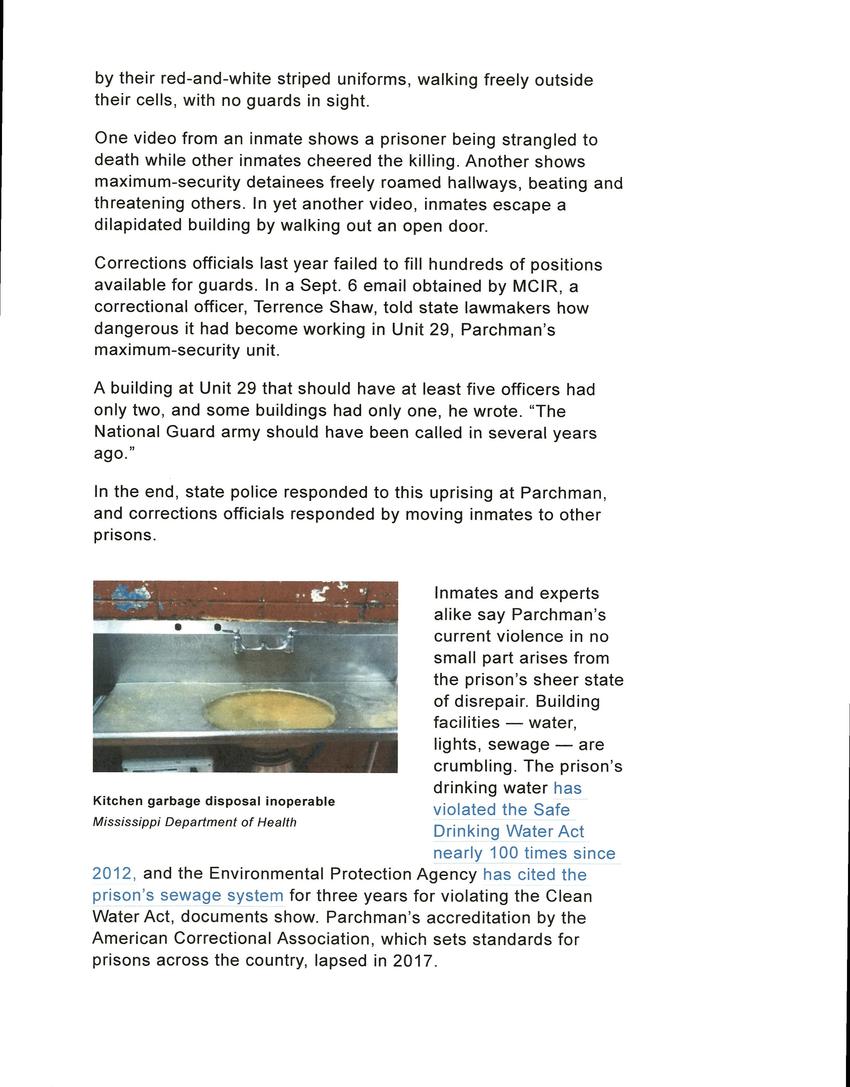 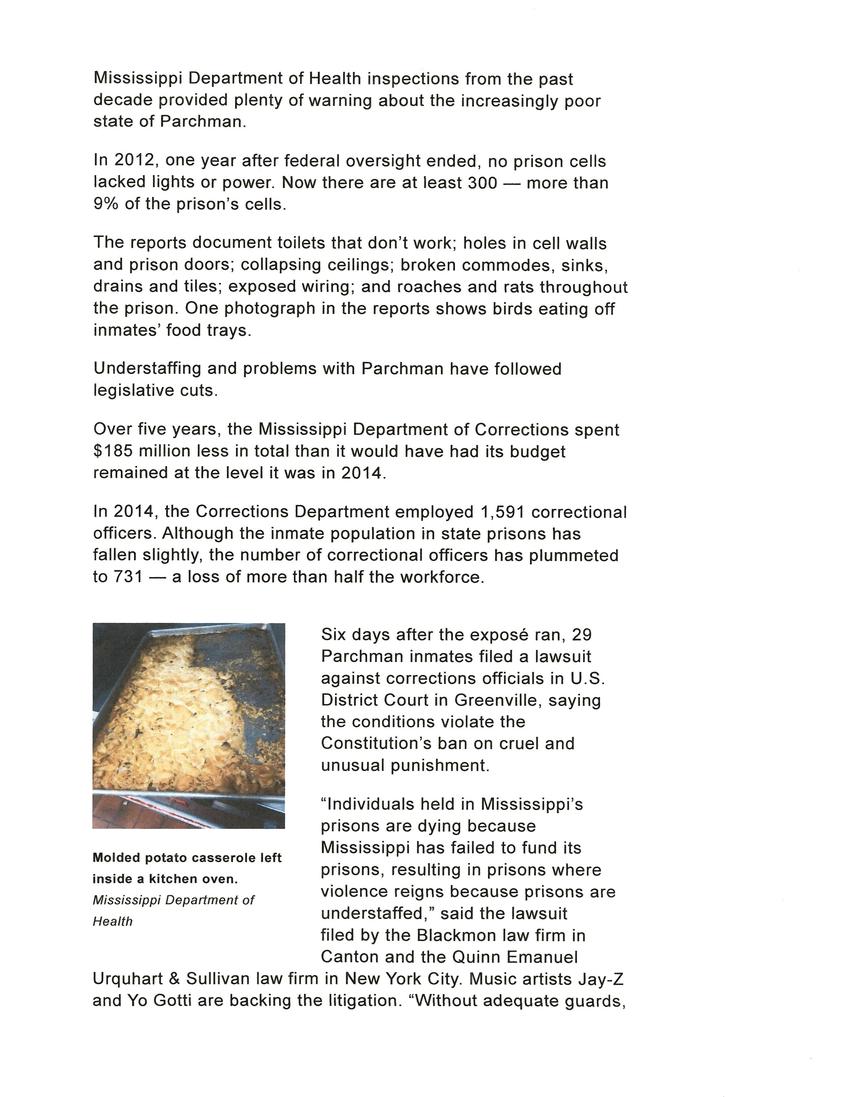 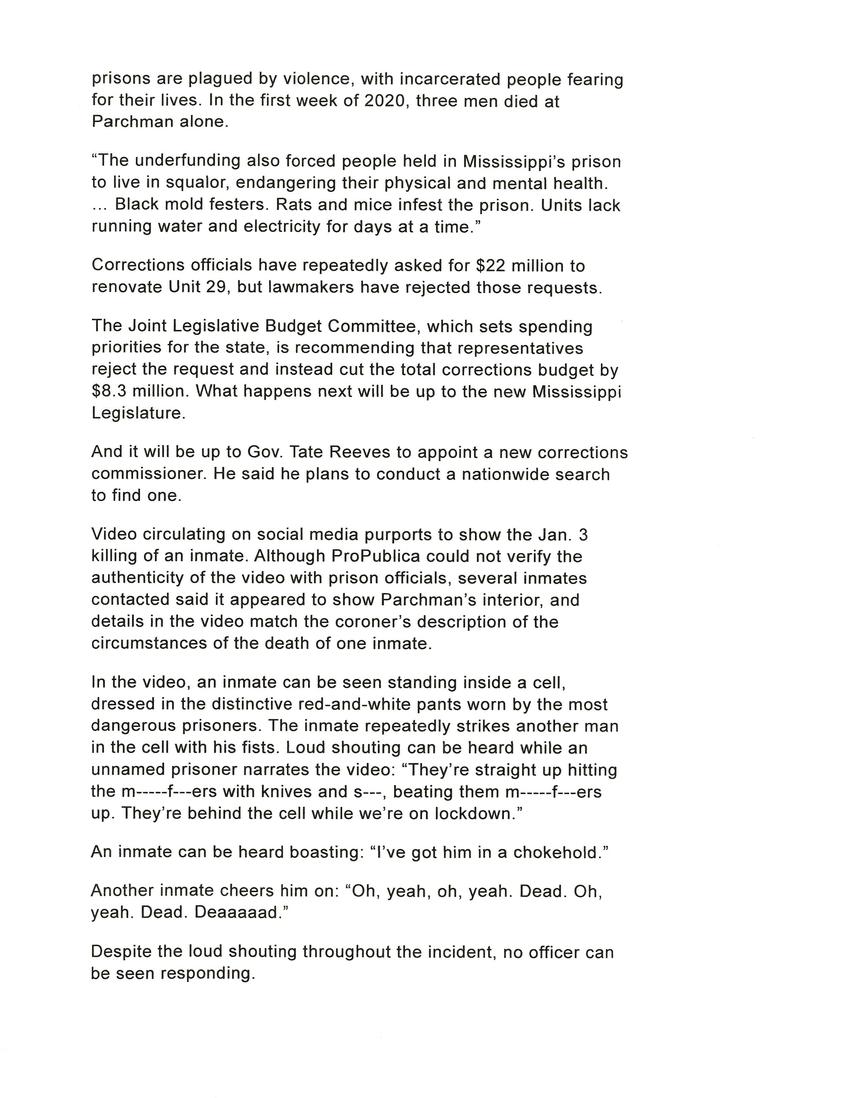 Investigations by federal, state and local officials could lead to criminal charges

Since July 2019, seven prisoners have been killed by fellow inmates at the Mississippi State Penitentiary at Parchman — what is supposed to be the most secure facility in the state. In the prior eight years, there were four inmate killings. Vickie D. King/Mississippi Department of Corrections

Since July 2019, seven prisoners have been killed by fellow inmates at the Mississippi State Penitentiary at Parchman — what is supposed to be the most secure facility in the state. In the prior eight years, there were four inmate killings.
Vickie D. King/Mississippi Department of Corrections

Confronted by horrific conditions and in the wake of recent uprisings inside Mississippi’s prisons that have left five dead, the Justice Department, in coordination with state authorities, has launched criminal and civil investigations with a look at possible charges, the Mississippi Center for Investigative Reporting has learned.

Earlier this week, department officials hinted at their two-fold investigation, putting out a news release that provided contact information for the FBI to report criminal violations and for the Justice Department’s Civil Rights Division (877-218-5228 or 202-514-6255) to report prison conditions.

“This is what we wanted. This is what families with loved ones inside wanted,” said Kevin Ring, president of FAMM, a national criminal justice reform organization that has asked for a civil rights investigation by the U.S. Department of Justice. “A federal investigation is our only hope for finding out the full extent of the problem.”

Cliff Johnson, director of the University of Mississippi’s MacArthur Justice Center, which represents many inmates, said he is “relieved to know the day of reckoning has finally come for Mississippi. We have ignored the humanity of those in our custody and care, the pleas of people who knew the truth about our prisons, and the constitutional and moral laws that demanded we do better.”

Grace Fisher, spokeswoman for the Mississippi Department of Corrections, said the agency does not comment on investigations. "The agency has a good working relationship with federal, state and local authorities," she said.

Over the past year, MCIR and ProPublica have detailed the failed policies, the horrific conditions inside Mississippi’s prisons and the control of gangs, exacerbated by the lack of correctional officers.

Since August, MCIR and ProPublica have reported about how Mississippi prisons might be even worse than those in Alabama, where the Justice Department intervened and a federal judge has ordered the state to add as many as 2,000 new officers in the next several years.

The Mississippi prison under the most scrutiny is the state’s most notorious, the Mississippi State Penitentiary at Parchman, where since July 2019, seven prisoners have been killed by fellow inmates. In the prior eight years, there were four inmate killings.

The current violence comes after years of neglect by state officials, who allowed conditions at Parchman to deteriorate after federal courts ended oversight of the facility in 2011.

The prison’s descent has put at risk the safety of corrections officers, the investment of hundreds of millions of dollars of Mississippi taxpayer funds and the health of the inmates the state is charged with protecting, MCIR and ProPublica found.

Inmates described themselves as being prey to prison gangs who control the supply of contraband drugs and weapons, bedding, food and cellphones. Photographs and videos reviewed by the news organizations show the most dangerous inmates, identified by their red-and-white striped uniforms, walking freely outside their cells, with no guards in sight.

One video from an inmate shows a prisoner being strangled to death while other inmates cheered the killing. Another shows maximum-security detainees freely roamed hallways, beating and threatening others. In yet another video, inmates escape a dilapidated building by walking out an open door.

A building at Unit 29 that should have at least five officers had only two, and some buildings had only one, he wrote. “The National Guard army should have been called in several years ago.”

In the end, state police responded to this uprising at Parchman, and corrections officials responded by moving inmates to other prisons.
Kitchen garbage disposal inoperable Mississippi Department of Health

Mississippi Department of Health inspections from the past decade provided plenty of warning about the increasingly poor state of Parchman.

In 2012, one year after federal oversight ended, no prison cells lacked lights or power. Now there are at least 300 — more than 9% of the prison’s cells.

The reports document toilets that don’t work; holes in cell walls and prison doors; collapsing ceilings; broken commodes, sinks, drains and tiles; exposed wiring; and roaches and rats throughout the prison. One photograph in the reports shows birds eating off inmates’ food trays.

Understaffing and problems with Parchman have followed legislative cuts.

Over five years, the Mississippi Department of Corrections spent $185 million less in total than it would have had its budget remained at the level it was in 2014.

Six days after the exposé ran, 29 Parchman inmates filed a lawsuit against corrections officials in U.S. District Court in Greenville, saying the conditions violate the Constitution’s ban on cruel and unusual punishment.

“Individuals held in Mississippi’s prisons are dying because Mississippi has failed to fund its prisons, resulting in prisons where violence reigns because prisons are understaffed,” said the lawsuit filed by the Blackmon law firm in Canton and the Quinn Emanuel Urquhart & Sullivan law firm in New York City. Music artists Jay-Z and Yo Gotti are backing the litigation. “Without adequate guards, prisons are plagued by violence, with incarcerated people fearing for their lives. In the first week of 2020, three men died at Parchman alone.

“The underfunding also forced people held in Mississippi’s prison to live in squalor, endangering their physical and mental health. … Black mold festers. Rats and mice infest the prison. Units lack running water and electricity for days at a time.”

Corrections officials have repeatedly asked for $22 million to renovate Unit 29, but lawmakers have rejected those requests.

The Joint Legislative Budget Committee, which sets spending priorities for the state, is recommending that representatives reject the request and instead cut the total corrections budget by $8.3 million. What happens next will be up to the new Mississippi Legislature.

And it will be up to Gov. Tate Reeves to appoint a new corrections commissioner. He said he plans to conduct a nationwide search to find one.

Video circulating on social media purports to show the Jan. 3 killing of an inmate. Although ProPublica could not verify the authenticity of the video with prison officials, several inmates contacted said it appeared to show Parchman’s interior, and details in the video match the coroner’s description of the circumstances of the death of one inmate.

In the video, an inmate can be seen standing inside a cell, dressed in the distinctive red-and-white pants worn by the most dangerous prisoners. The inmate repeatedly strikes another man in the cell with his fists. Loud shouting can be heard while an unnamed prisoner narrates the video: “They’re straight up hitting the m-----f---ers with knives and s---, beating them m-----f---ers up. They’re behind the cell while we’re on lockdown.”

An inmate can be heard boasting: “I’ve got him in a chokehold.”

Despite the loud shouting throughout the incident, no officer can be seen responding.

Though the identity of the man attacked in the video could not be confirmed, a prison doctor pronounced an inmate named Denorris Howell dead at 3:20 a.m. on Jan 3. Authorities have determined he sustained a fatal neck injury.

No charges have been filed, and MDOC officials have declined to comment.

Howell’s mother, Janice Wilkins of Memphis, said her son had called her on his cellphone and told her that the lights had been turned out. Before hanging up the phone, he said that a guard was letting inmates out of their cells.

“My son won’t be back,” she said. “But I’m crying for other inmates who are incarcerated.”

Article updated on January 29, 2020 to include additional response from MDOC.

Jerry Mitchell is an investigative reporter for the Mississippi Center for Investigative Reporting, a nonprofit news organization that seeks to inform, educate and empower Mississippians in their communities through the use of investigative journalism. Sign up for MCIR’s newsletters here.

The Mississippi Center for Investigative Reporting continues to examine the state’s corrections system. We want to know what’s really happening behind the walls of Mississippi’s prisons. You can share your tips and your stories by emailing us at Jerry.Mitchell.MCIR@gmail.com.
SIGN UP FOR OUR NEWSLETTER