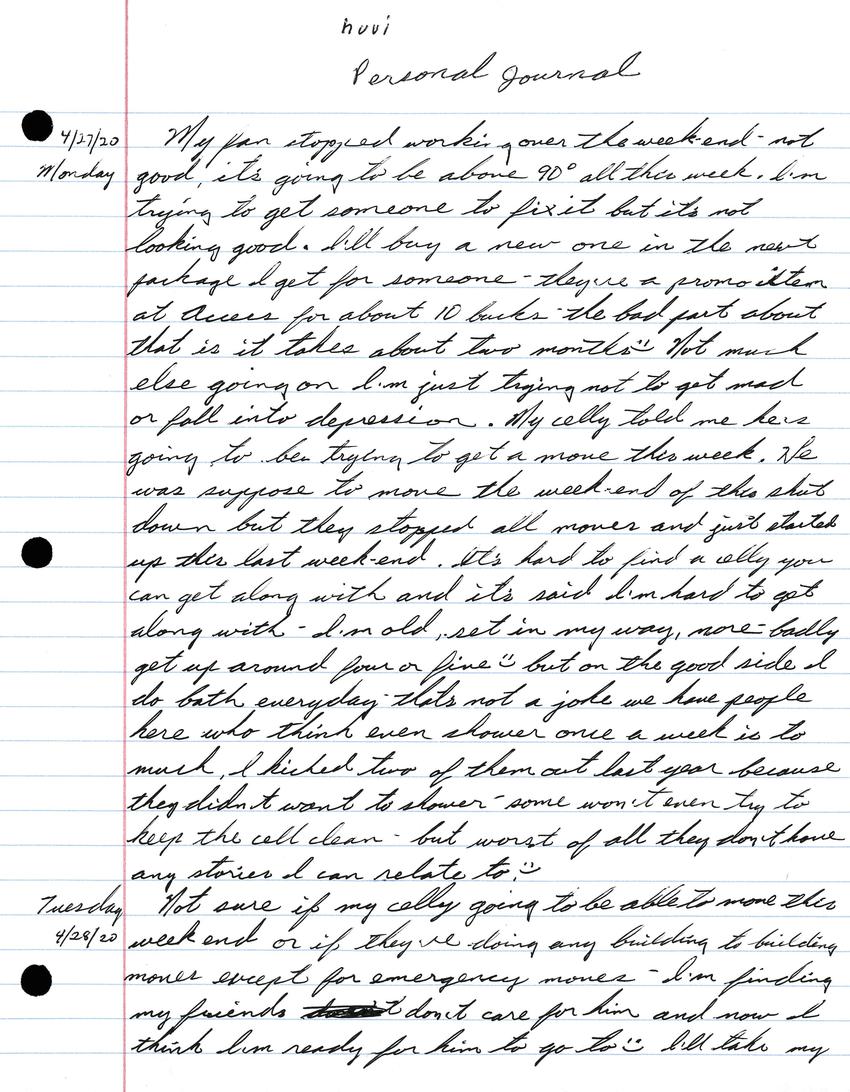 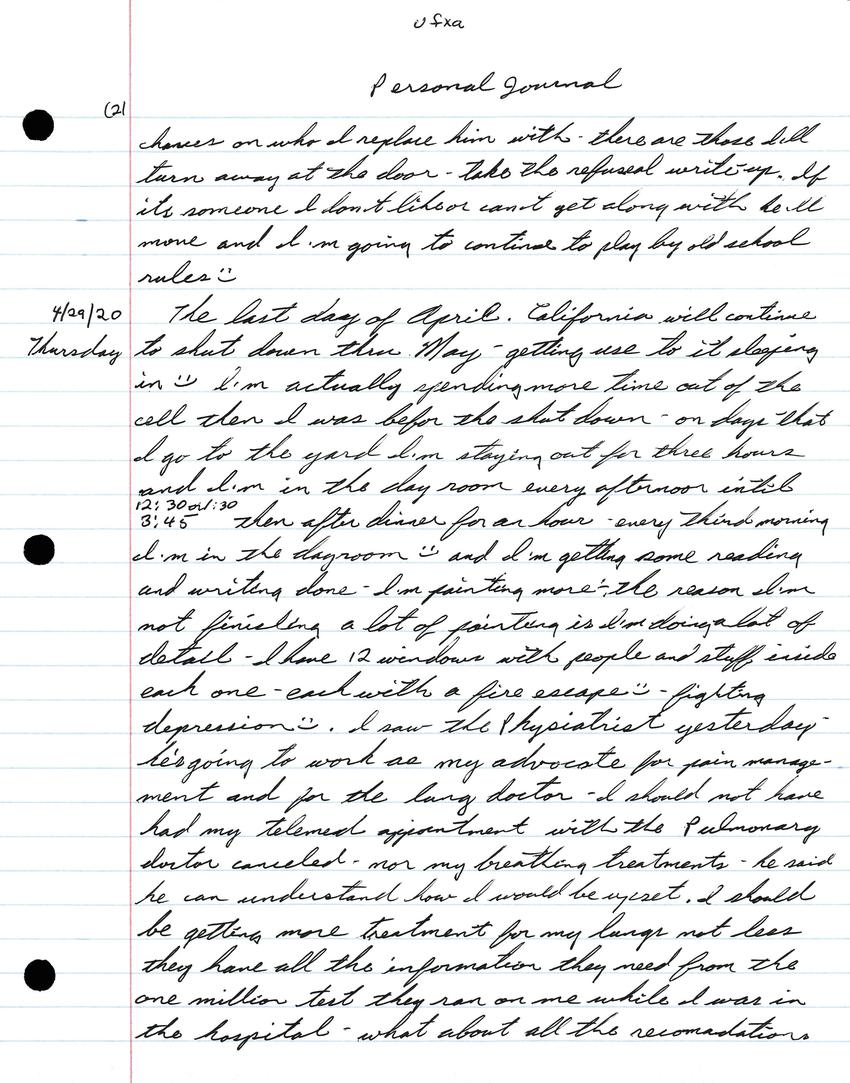 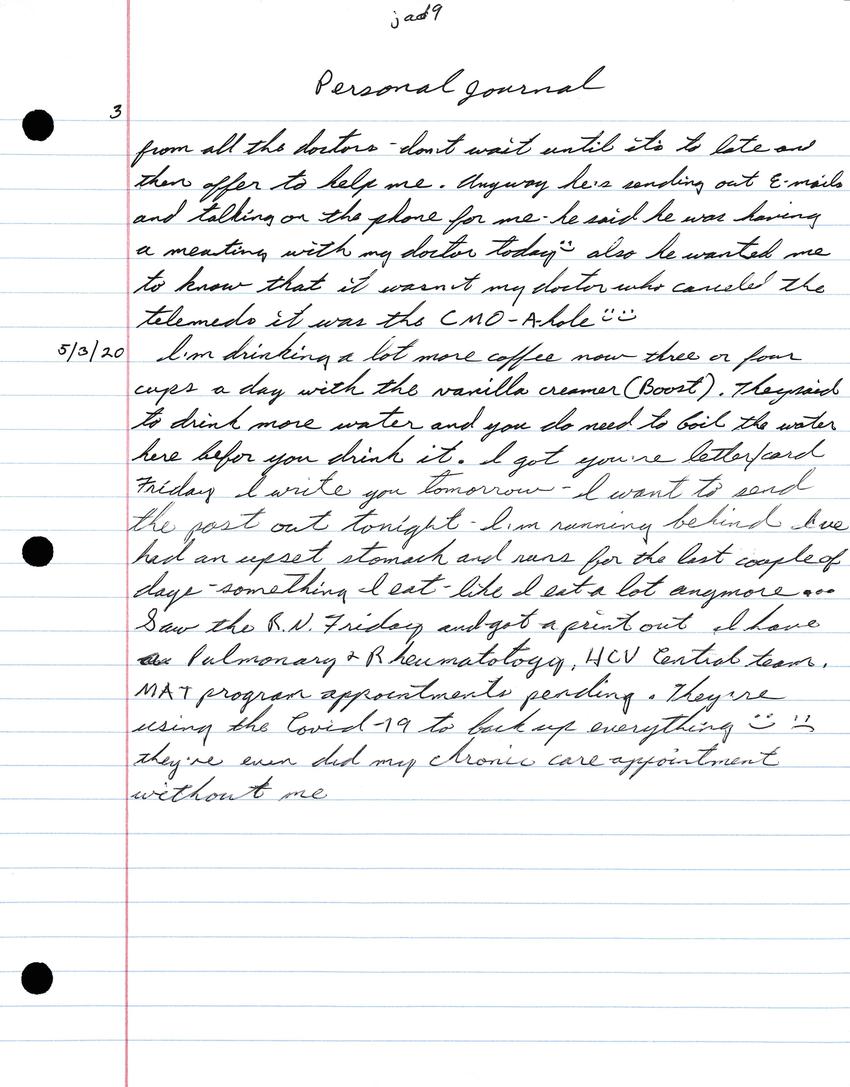 My pen stopped working over the weekend - not good, it's going to be above 90* all this week. I'm trying to get someone to fix it but it's not looking good. I'll buy a new one in the next package I get for someone - they've a promo item at access for about 10 bucks - the bad part about that is it takes about two months :) Not much else going on. I'm just trying not to get mad or fall into depression. My celly told me he's going to be trying to get a move this week. He was on course to move the weekend of this shut down but they stopped all moves and just started up this last weekend. It's hard to find a celly you can get along with and it's said I'm hard to get along with - I'm old, set in my way - badly get up around four or five :) but on the good side I do bath everyday - that's not a joke we have people here who think even shower once a week is too much, I kicked two of them out last year because they didn't want to shower some won't even try to keep the cell clean - but worst of all they don't have any stories I can relate to. :)
Not sure if my celly going to be able to move this weekend or if they are doing any building to building moves except for emergency moves - I'm finding my friends don't care for him and now I think I'm ready for him to go too :) I'll take my chances on who I replace him with - there are those I'll turn away at the door - take the refusal writings. If it's someone I don't like or can't get along with he will move and I'm going to continue to play by old school rules. :)
The last day of April. California will continue to shut down this May - getting use to it staying in :) I'm actually spending more time out of my cell then I was before the shut down - on days that I go to the yard I'm staying out for three hours and I'm in the day room every afternoon until when after dinner for an hour - every third morning I'm in the dayroom :) and I'm getting some reading and writing done - I'm painting more; the reason I'm not finishing a lot of painting is I'm doing a lot of detail - I have 12 windows with people ad stuff inside each one - each with a fire escape :) - fighting depression :). Drew the psychiatrist yesterday. He's going to work as my advocate for pain management and in the long doctor - I should not have had my telemed appointment with the pulmonary doctor canceled - nor my breathing treatments - he said he can understand how I would be upset. I should be getting more treatment for my lungs not less they have all this information they need from the one million tests they ran on me while I was in the hospital - what about all the recommendations from all the doctors - don't wait until it's to late and then after to help me. Anyway he's sending out emails and talking on the phone for me - he said he was having a meeting with my doctor today :) also he wanted me to know that it wasn't my doctor who canceled the telemeeting it was the CMO- A-hole :) :)
5/10/20
I'm drinking a lot more coffee now three or four cups a day with the vanilla creamer (Boost). They said to drink more water and you do need to boil the water here before you drink it. I got you're letter/card Friday I write you tomorrow- I want to send the post out tonight- I'm running behind I've had an upset stomach and runs for the last couple of days- something I eat- like I eat a lot anymore... saw the R.N. Friday and got a print out. I have Pulmonary +Rheumatotogy, HCV Central team. MAT program appointments pending. They're using the COVID-19 to back eye everything :) :( they're even did my chronic care appointment without me

Thanks for writing! I worked on the transcription for your post. It isn't quite done yet. I hope you get a new celly that you like. Until then talk more with your cellmate, maybe they'll tell you something you didn't know about them before. I hope you are well.
- Kenna