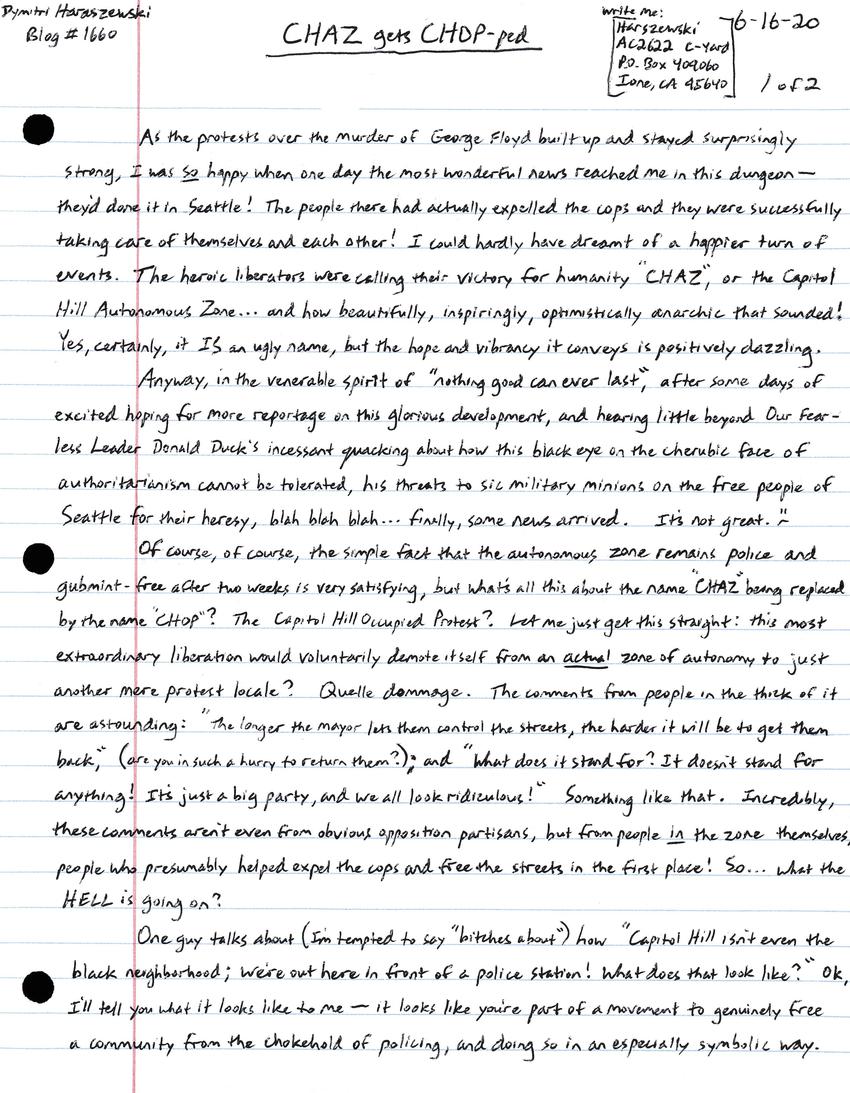 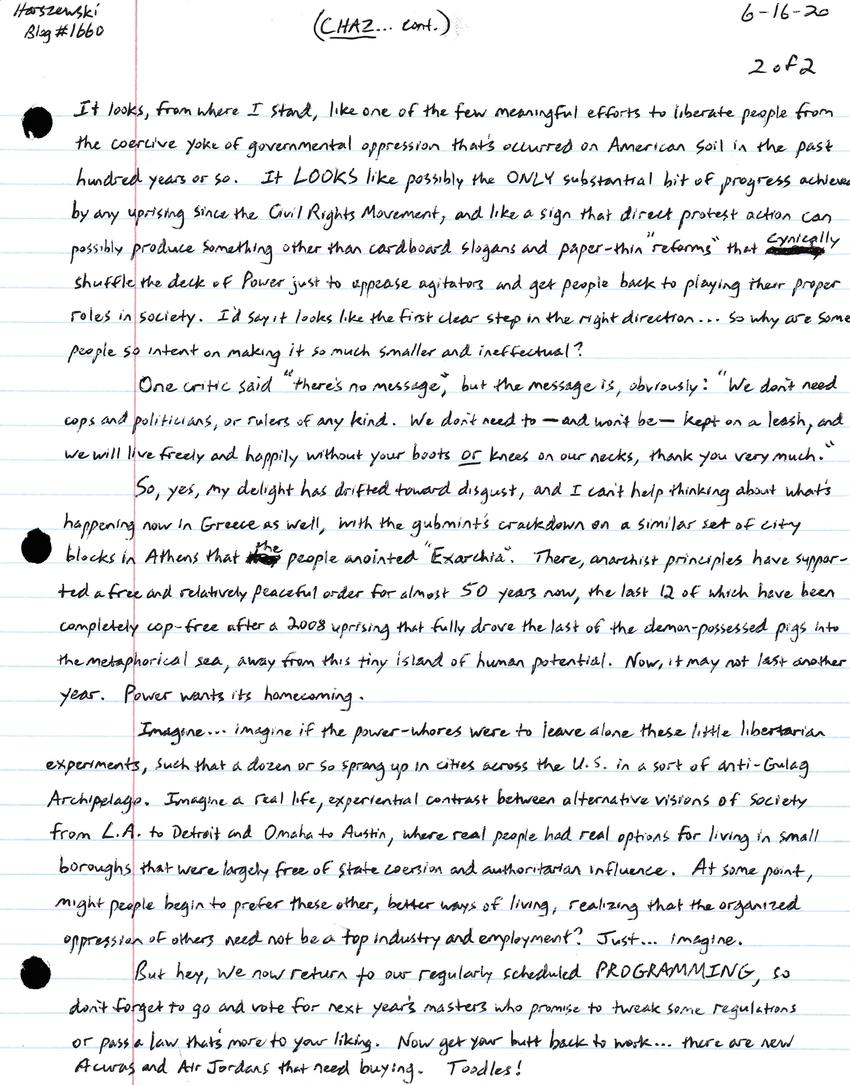 As the protests over the murder of George Floyd built up and stayed surprisingly strong, I was so happy when one day the most wonderful news reached me in this dungeon- they'd done it in Seattle! The people there had actually expelled the cops and they were successfully taking care of themselves and each other! I could hardly have dreamt of a happier turn of events. The heroic liberations were calling their victory for humanity "CHAZ", or the Capitol Hill Autonomous Zone... and how beautifully, inspiringly, optimistically anarchic that sounded! Yes, certainly, it is an ugly name, but the hope and vibrancy it conveys is positively dazzling.

Anyway, in the venerable spirit of "nothing good can ever last", after some days of excited hoping for more reportage of this glorious development, and hearing little beyond our fearless Leader Donald Duck's incessant quacking about how this black eye on the cherubic face of authoritarianism cannot be tolerated, his threats to sic military minions on the free people of Seattle for their heresy, blah blah blah... finally, some news arrived. It's not great. :(

Of course, of course, the simple fact that the autonomous zone remains police and gubmit-free after two weeks is very satisfying, but what's all this about the name "CHAZ" being replaced by the name "CHOP"? The Capitol Hill Occupied Protest? Let me just get this straight: this most extraordinary liberation would voluntarily demote itself from an actual zone of autonomy to just another mere protest locale? Quelle dommage. [Too bad.] The comments from people in the thick of it are astounding: "The longer the mayor lets them control the streets, the harder it will be to get them back", (are you in such a hurry to return to them?); and "what does it stand for? It doesn't stand for anything! It's just a big party, and we all look ridiculous!" Something like that. Incredibly, these comments aren't even from obvious opposition partisans, but from people in the zone themselves, people who presumably helped expel the cops and free the streets in the first place! So... what the HELL is going on?

One guy talks about (I'm tempted to say "bitches about") how "Capitol Hill isn't even the black neighbourhood; we're out here in front of a police station! What does that look like?" Ok, I'll tell you what it looks like to me- it looks like you're part of a movement to genuinely free a community from the chokehold of policing, and doing so in an especially symbolic way. It looks, from where I stand, like one of the few meaningful efforts to liberate people from the coercive yoke of governmental oppression that's occurred on American soil in the past hundred years or so. It LOOKS like possibly the ONLY substantial bit of progress achieved by any uprising since the Civil Rights Movement, and like a sign that direct protest action can possibly produce something other than cardboard slogans and paper-thin "reforms" that cynically shuffle the deck of power just to appease agitators and get people back to playing their proper roles in society. I'd say it looks like the first clear step in the right direction... so why are some people so intent on making it so much smaller and ineffectual?

One critic said "there's no message", but the message is, obviously: "We don't need cops and politicians, or rulers of any kind. We don't need to- and won't be- kept on a leash, and we will live freely and happily without your boots or knees on our knecks, thank you very much."

So, yes, my delight has drifted toward disgust, and I can't help thinking about what's happening now in Greece as well, with the gubmit's crackdown on a similar set of city blocks in Athens that the people anointed "Exarchia". There, anarchist principles have supported a free and relatively peaceful order for almost 50 years now, the last 12 of which have been completely cop-free after a 2008 uprising that fully drove the last of the demon-possessed pigs into the metaphorical sea, away from this tiny island of human potential. Now, it may not last another year. Power wants its homecoming.

Imagine... imagine if the power-whores were to leave alone these little libertarian experiments, such that a dozen or so sprang up in cities across the U.S. in a sort of anti-Gulag Archipelago. Imagine a real-life, experimental contrast between alternative visions of society from L.A. to Detroit and Omaha to Austin, where real people had real options for living in small boroughs that were largely free of state coercion and authoritarian influence. At some point, might people begin to prefer these other, better ways of living, realising that the organised oppression of others need not be a top industry and employment? Just... imagine.

But hey, we now return to our regularly scheduled PROGRAMMING, so don't forget to go and vote for next years masters who promise to tweak some regulations or pass a law that's more to your liking. Now get your butt back to work... there are new Acuras and Air Jordans that need buying. Toodles!