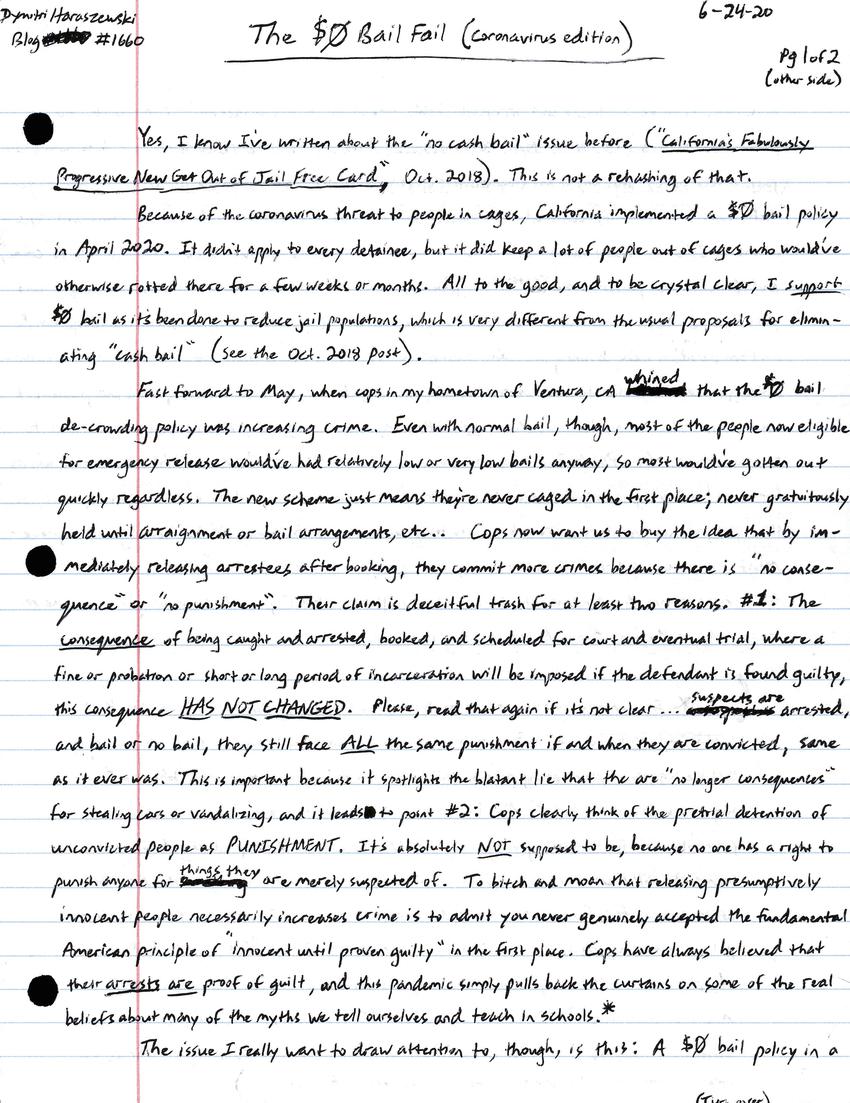 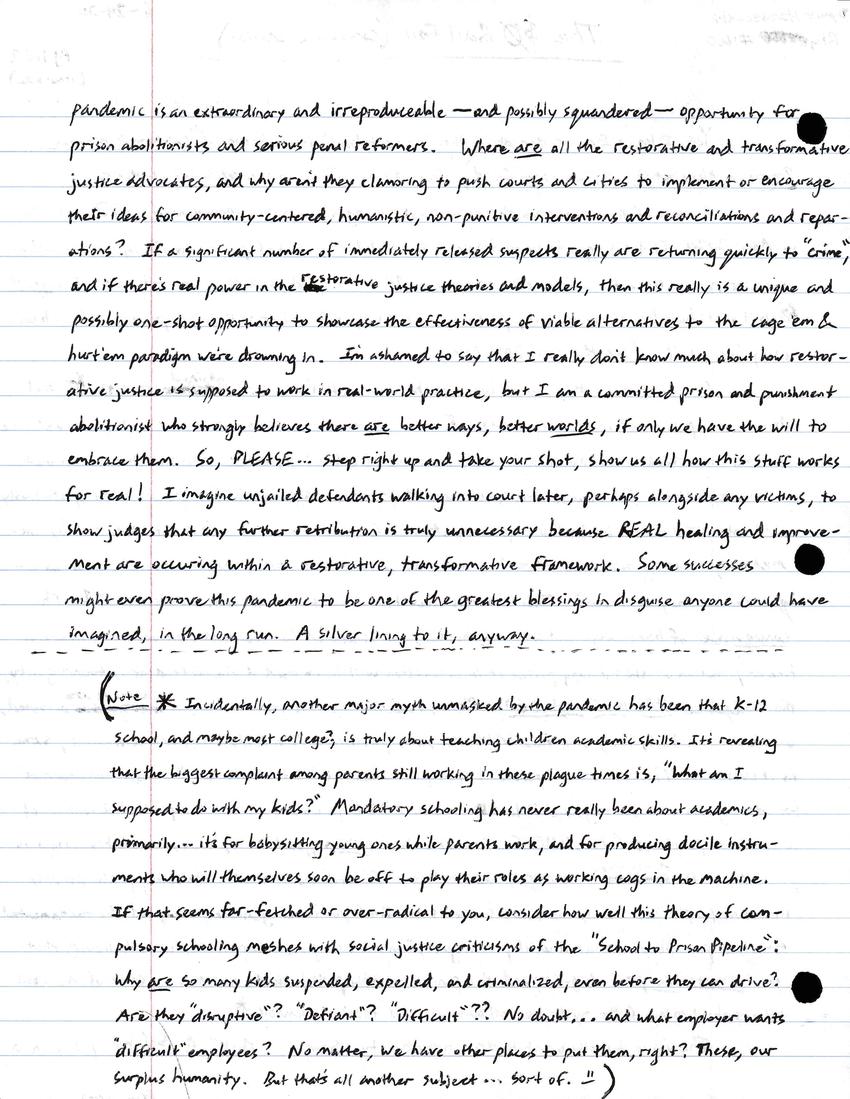 Yes, I know I've written about the 'no cash bail' issue before ('California's Fabulously Progressive New Get Out of Jail Free Card', Oct 2018). This is not a rehashing of that.

Because of the coronavirus threat to people in cages, California implemented a $0 bail policy in April 2020. It didn't apply to every detainee, but it did keep a lot of people out of cages who would've otherwise rotted there for a few weeks or months. All to the good, and to be crystal clear, I support $0 bail as it's been done to reduce jail populations, which is very different from the usual proposals for eliminating 'cash bail' (see the Oct. 2018 post).

Fast forward to May, when cops in my hometown of Ventura, CA whined that the $0 bail de0-crowding policy was increasing crime. Even with normal bail, though, most of the people now eligible for emergency release would've had relatively low of very low bails anyway, so would've gotten ot quickly regardless. The new scheme just means they're never caged in the first place; never gratuitously held until arraignment or bail arrangements etc. Cops now want us to buy the idea that by immediately releasing arrestees after booking, the commit more crimes because there is 'no consequence' or 'no punishment'. Their claim is deceitful trash for at least two reasons. #1: The CONSEQUENCE of being caught and arrested, booked, and scheduled for court and eventual trial, where a fine or probation or short or long period of incarceration will be imposed if the defendant is found guilty, this consequence HAS NOT CHANGED. Please, read that again if it's not clear... suspects are arrested, and bail or no bail, they still face ALL the same punishment if and when they are convicted, same as it ever was. This is important because it spotlights the blatant lie that there are 'no longer consequences' for stealing cars or vandalizing, and it leads to point #2: Cops clearly think of the pretrial detention of unconnected people as PUNISHMENT. It's absolutely NOT supposed to be, because no one has a right to punish anyone for things they are merely suspected of. To bitch and moan that releasing presumptively innocent people necessarily increases crime is to admit you never genuinely accepted the fundamental American principle of 'innocent until proven guilty' in the first place. Cops have always believed that their ARRESTS ARE proof of guilt, and this pandemic merely pulls back the curtains on some of the real beliefs about many of the myths we tell ourselves and teach in schools.*

The issue I really want to draw attention to, though, is this: A $0 bail policy in a pandemic is an extraordinary and irreproducible - and possibly squandered - opportunity for prison abolitionists and serious penal reformers. Where ARE all the restorative and transformative justice advocates, and why aren't they clamoring to push courts and cities to implement or encourage their ideas for community-centered, humanistic, non-punitive interventions and reconciliations and reparations? If a significant number of immediately-released suspects really are returning quickly to 'crime', and if there's real power in the restorative justice theories and models, then this really is a unique and possibly one-shot opportunity to showcase the effectiveness of viable alternatives to the cage 'em & hurt 'em paradigm we're drowning in. I'm ashamed to say that I really don't know much about how restorative justice is supposed to work in real-world practice, but I am a committed prison and punishment abolitionist who strongly believes there ARE better ways, better WORLDS, if only we have the will to embrace them. So, PLEASE... step right up and take your shot, show us all how this stuff works for real! I imagine unjailed defendents walking into court later, perhaps alongside any victims, to show judges that any further retribution is truly unnecessary because REAL healing and improvement are occurring within a restorative, transformative framework. Some successes might even prove this pandemic to be one of the greatest blessings in disguise anyone could have imagined, in the long run. A silver lining to it, anyway.

(NOTE * Incidentally, another major myth unmasked by the pandemic has been that K-12 school, and maybe most college?, is truly about teaching children academic skills. It's revealing that the biggest complaint among parents still working in these plague times is, 'What am I supposed to do with the kids?' Mandatory schooling has never really been about academics, primarily... it's for babysitting young ones while parents work, and for producing docile instruments who will themselves soon be off to play their roles as working cogs in the machine. If that seems far-fetched or over-radical to you, consider how well this theory of compulsory schooling meshes with social justice criticisms of the 'School to Prison Pipeline': Why ARE so many kids suspended, expelled, and criminalized, even before they can drive? Are the 'disruptive'? 'Defiant'? 'Difficult'?? No doubt... and what employer wants 'difficult' employees? No matter, we have other places to put them, right? These, our surplus humanity. But that's all another subject... sort of.)