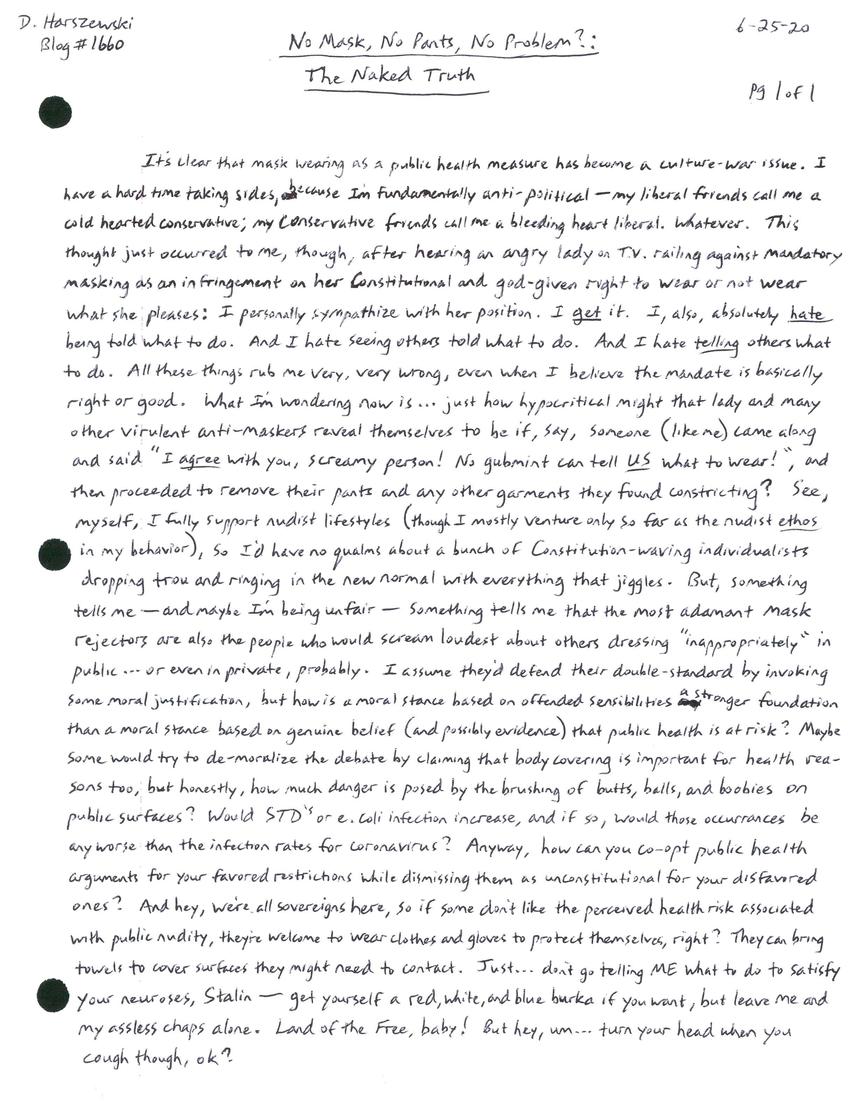 No Mask, No Pants, No Problem?: The Naked Truth

It's clear that mask wearing as a public health measure has become a culture-war issue. I have a hard time taking sides, because I'm fundamentally anti-political - my liberal friends call me a cold hearted conservative; my conservative friends call me a bleeding heart liberal. Whatever. This thought just occurred to me though, after hearing an angry lady on TV railing against mandatory masking as an infringement on her Constitutional and god-given right to wear or not wear what she pleases: I personally sympathize with her position. I get it. I, also, absolutely hate being told what to do. And I hate seeing others told what to do. And I hate telling others what to do. All these things rub me very, very wrong, even when I believe the mandate is basically right or good. What I'm wondering now is...just how hypocritical might that lady and many other virulent anti-maskers reveal themselves to be if, say, someone (like me) came along and said "I agree with you, screamy person! No gubmint can tell US what to wear!", then proceeded to remove their pants and any other garments they found constricting? See, myself, I fully support nudist lifestyles (though I mostly venture only so far as the nudist ethos in my behavior), so I'd have no qualms about a bunch of Constitution-waving individualists dropping trou and ringing in the new normal with everything that jiggles. But, something tells me - and maybe I'm being unfair - something tells me that the most adamant mask rejectors are also the people who would scream loudest about others dressing "inappropriately" in public...or even in private, probably. I assume they'd defend their double-standard by invoking some moral justification, but how is a moral stance based on offended sensibilities a stronger foundation than a moral stance based on genuine belief (and possibly evidence) that public health is at risk? Maybe some would try to de-moralize the debate by claiming that body covering is important for health reasons too, but honestly, how much danger is posed by the brushing of butts, balls, and boobies on public surfaces? Would STDs or e. coli infections increase, and if so, would those occurrences be any worse than the infection rates for coronavirus? Anyway, how can you co-opt public health arguments for your favored restrictions while dismissing them as unconstitutional for your disfavored ones? And hey, we're all sovereigns here, so if some don't like the perceived health risk associated with public nudity, they're welcome to wear clothes and gloves to protect themselves, right? They can bring towels to cover surfaces they might need to contact. Just...don't go telling ME what to do to satisfy your neurosis, Stalin - get yourself a red, white, and blue burka if you want, but leave me and my ass-less chaps alone. Land of the Free, baby! But hey, um...turn your head when you cough though, ok?