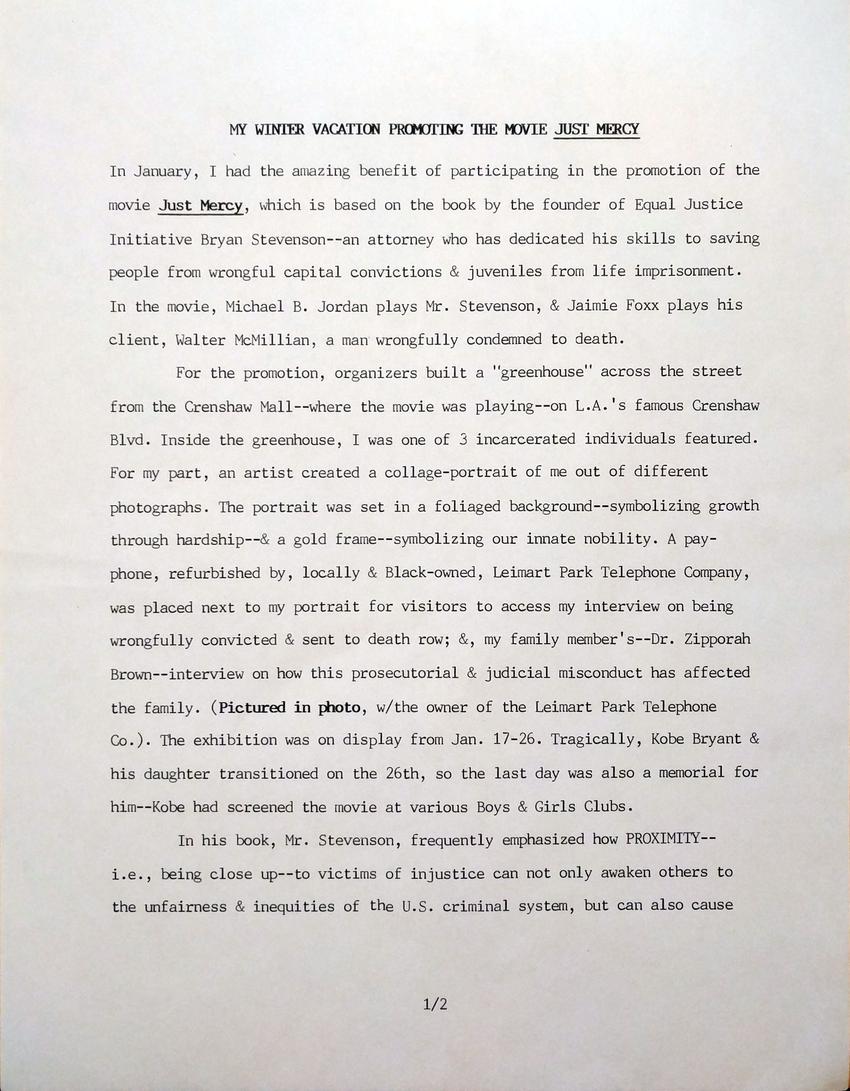 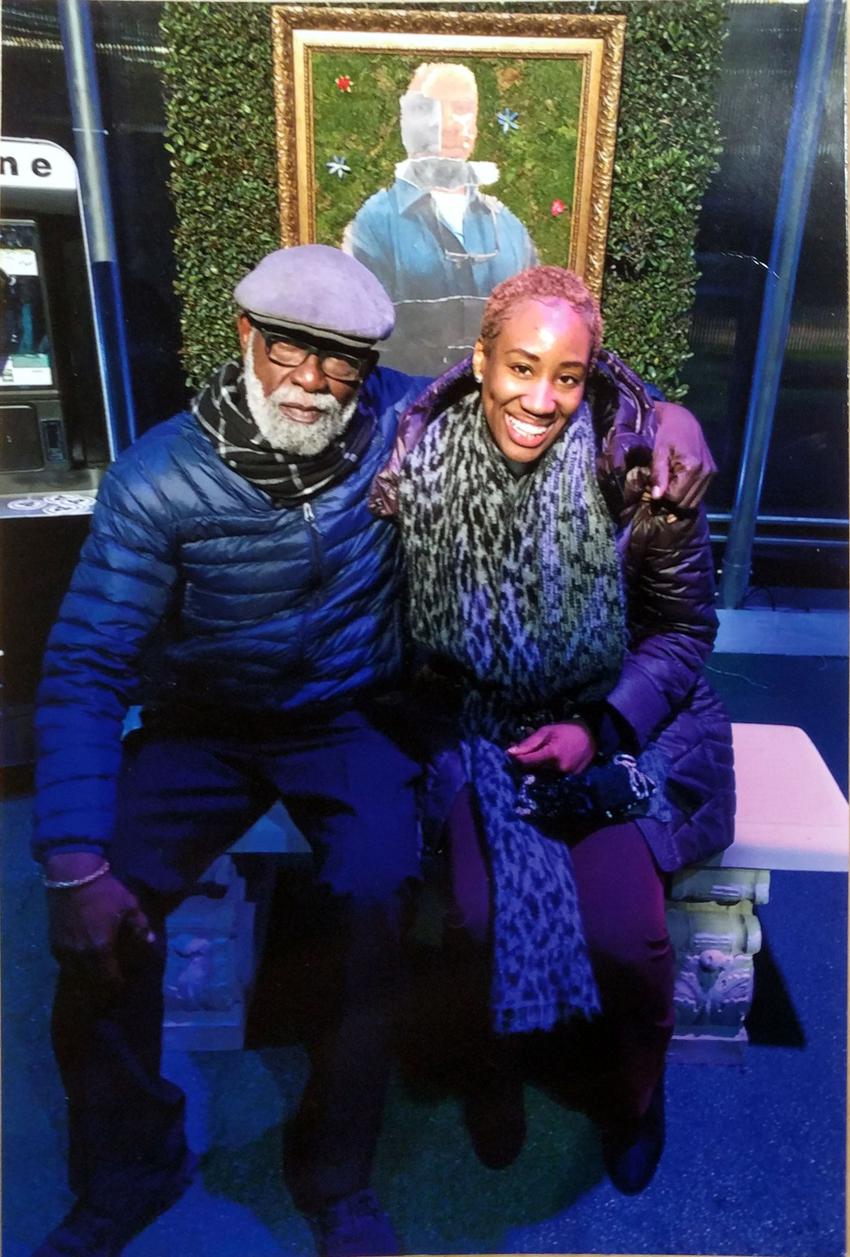 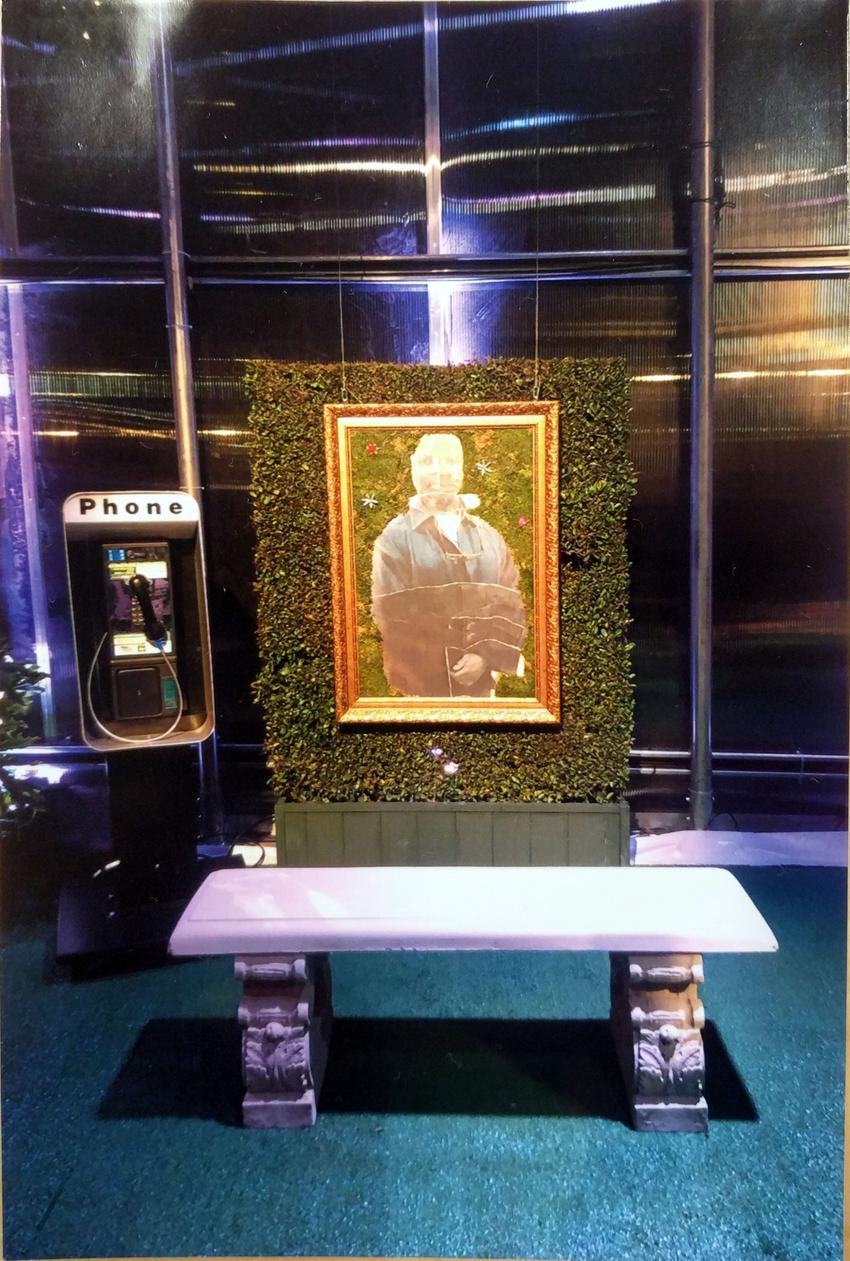 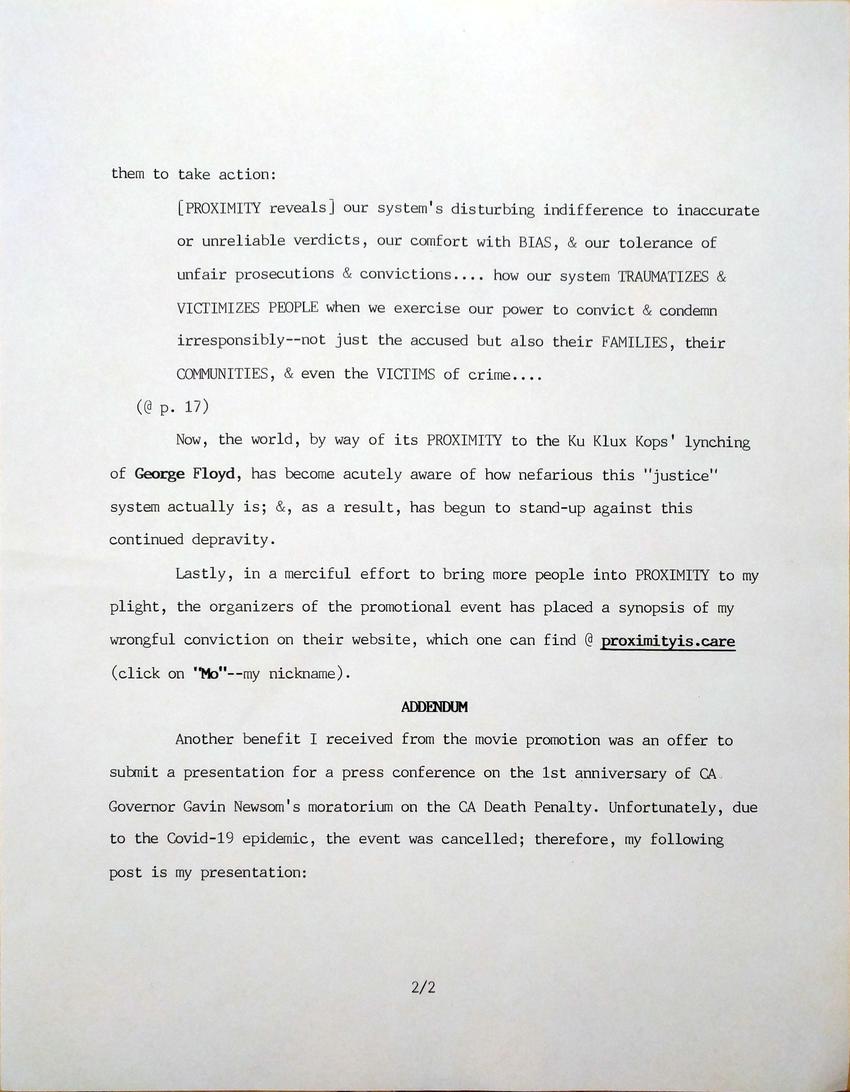 In January, I had the amazing benefit of participating in the promotion of the movie J͟U͟S͟T͟ ͟M͟E͟R͟C͟Y͟, which is based on the book by the founder of Equal Justice Initiative Bryan Stevenson--an attorney who has dedicated his skills to saving people from wrongful capital convictions & juveniles from life imprisonment. In the movie, Michael B. Jordan plays Mr. Stevenson, & Jaimie Foxx plays his client, Walter McMillian, a man wrongfully condemned to death.

For the promotion, organizers built a "greenhouse" across the street from the Crenshaw Mall--where the movie was playing--on L.A.'s famous Crenshaw Blvd. Inside the greenhouse, I was one of 3 incarcerated individuals featured. For my part, an artist created a collage-portrait of me out of different photographs. The portrait was set in a foliage background--symbolizing growth through hardship--& a gold frame--symbolizing our innate nobility. A payphone, refurbished by, locally & Black-owned, Leimart Park Telephone Company, was placed next to my portrait for visitors to access my interview on being wrongfully convicted & sent to death row; &, my family member's--Dr. Zipporah Brown--interview on how his prosecutorial & judicial misconduct has affected the family. (𝐏𝐢𝐜𝐭𝐮𝐫𝐞𝐝 𝐢𝐧 𝐩𝐡𝐨𝐭𝐨, w/the owner of the Leimart Park Telephone Co.). The exhibition was on display from Jan. 17-26. Tragically, Kobe Bryant & his daughter transitioned on the 26th, so the last day was also a memorial for him--Jobe had screened the movie at various Boys & Girls Clubs.

In his book, Mr. Stevenson, frequently emphasized how PROXIMITY--i.e., being close up-- to victims of injustice can not only awaken others to the unfairness & inequalities of the U.S. criminal system, but can also cause them to take action:
[PROXIMITY reveals] our system's disturbing indifference to inaccurate or unreliable verdicts, our comfort with BIAS, & and our tolerance of unfair prosecutions & convictions...how our system TRAUMATIZES & VICTIMIZES PEOPLE when we exercise our power to convict & condemn irresponsibly--not just the accused but also their FAMILIES, their COMMUNITIES, & even the VICTIMS of crime...
(@ p. 17)

Now, the world, by way of its PROXIMITY to the Ku Klux Kops' lynching of 𝐆𝐞𝐨𝐫𝐠𝐞 𝐅𝐥𝐨𝐲𝐝, has become acutely aware of how nefarious this "justice" system actually is; &, as a result, has begun to stand-up against this continued depravity.

Lastly, in a merciful effort to bring more people into PROXIMITY to my plight, the organizers of the promotional event has placed a synopsis of my wrongful conviction on their website, which one can find @ 𝐩𝐫𝐨𝐱𝐢𝐦𝐢𝐭𝐲𝐢𝐬.𝐜𝐚𝐫𝐞 (click on "𝐌𝐨"--my nickname).

Another benefit I received from the movie promotion was an offer to submit a presentation for a press conference on the 1st anniversary of CA Governor Gavin Newsom's moratorium on the CA Death Penalty. Unfortunately, due to the Covid-19 epidemic, the event was cancelled; therefore, my following post is my presentation:

Because of this post, I now want to check out the movie at some point. Thank you for the recommendation. I'll be sure to look into the site and find your story.

Stay safe and healthy.
Hello Maurice.
I saw the film Just Mercy just before the lockdown happened. It beggars belief, the scene where they are all sitting around the table with the lawyer and he asks them who saw the defendant at the barbecue, and about twenty people raised their hands. Also the testimony of the jail house informant. Shocking. Texas is another state, Alabama too who hate being called out on their professional liars and will will work hard to defend them. That’s one of the main problems in life, you cannot defend yourself against an accomplished liar. Jamie Fox is a fantastic actor, gets better with age. He chooses great projects, doesn’t chase the money. America doesn’t seem to be embarrassed by what the world knows about it’s judicial system. Even has the audacity to challenge other nations. It’s penitentiary system is medieval. And if you treat and house humans in a medieval system, they will respond in a brutal manner, how could they not?
I loved the collage of you, so clever and thoughtful. Something that will exist long after we are just other people’s memories.
All the best
T
(scanned reply – view as blog post)
uploaded Aug. 21, 2020.  Original (PDF) 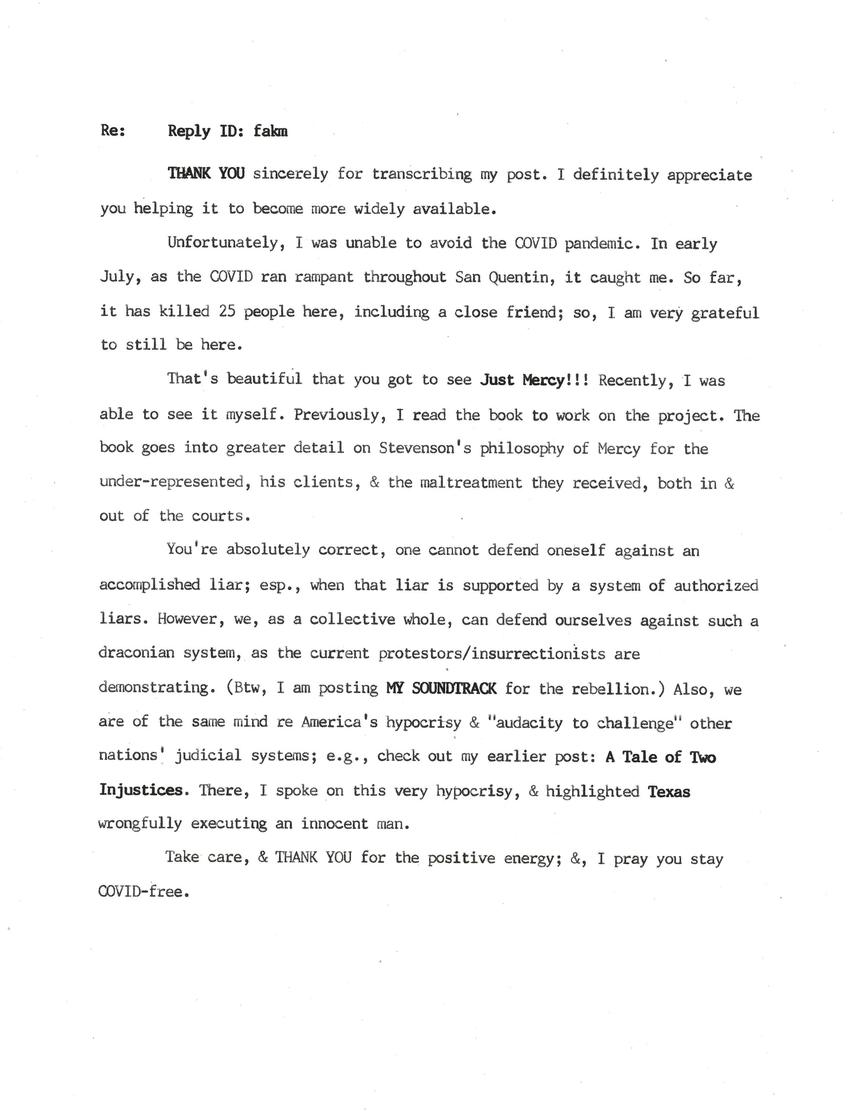 What an honor to know you! You inspire me Mo! Your resilience is a pure illustration of the power in which we all possess...if we are willing to be our highest self!
(scanned reply – view as blog post)
uploaded Jan. 25, 2021.  Original (PDF) 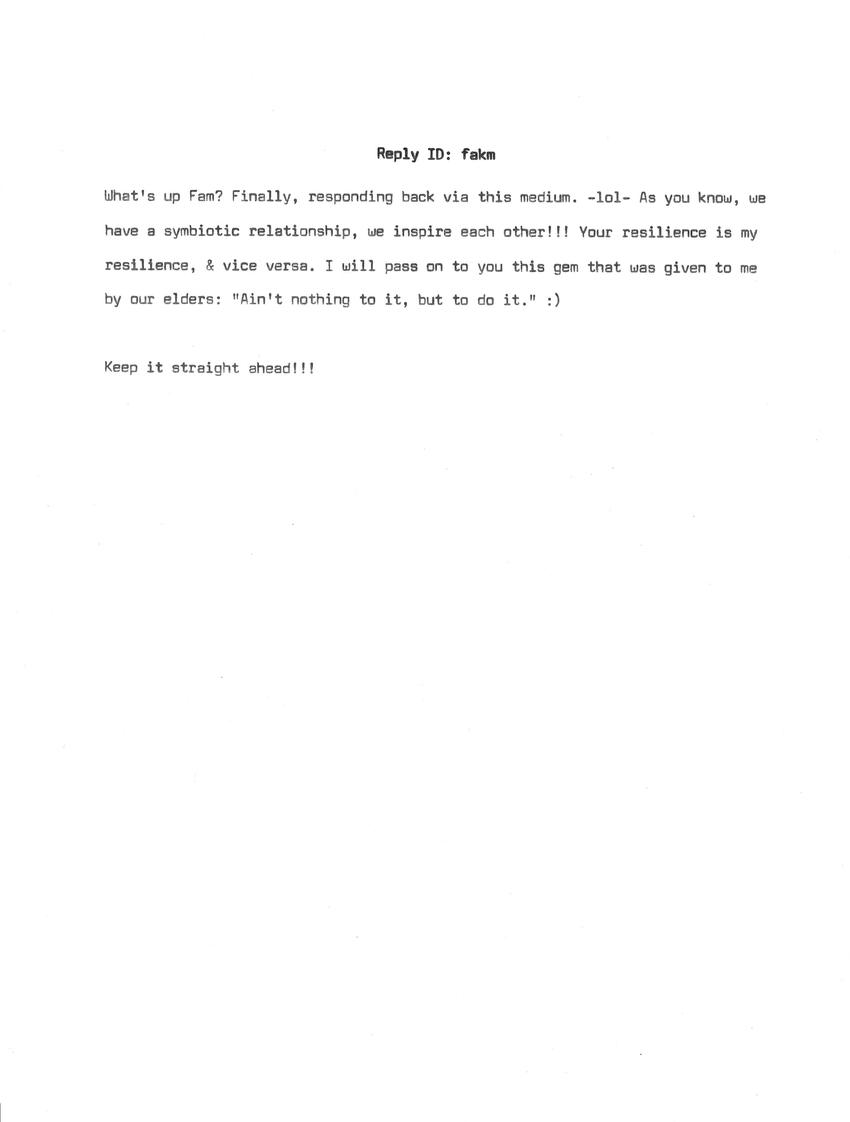