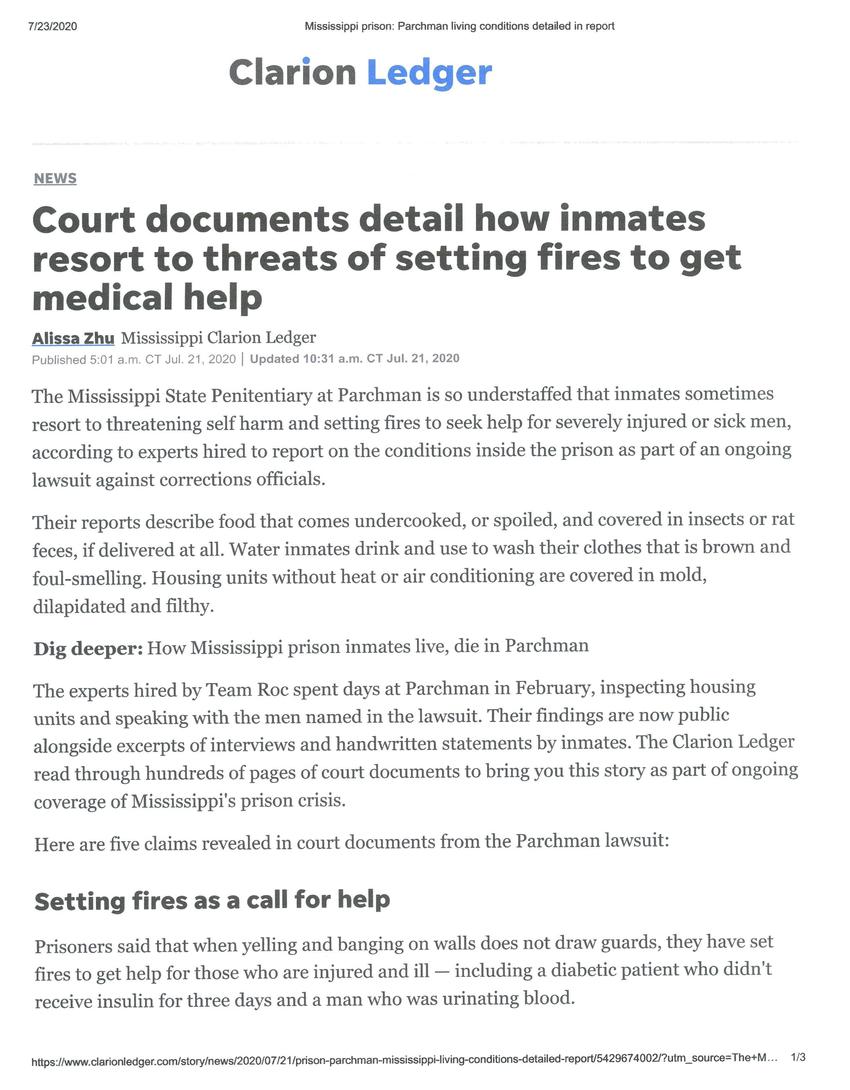 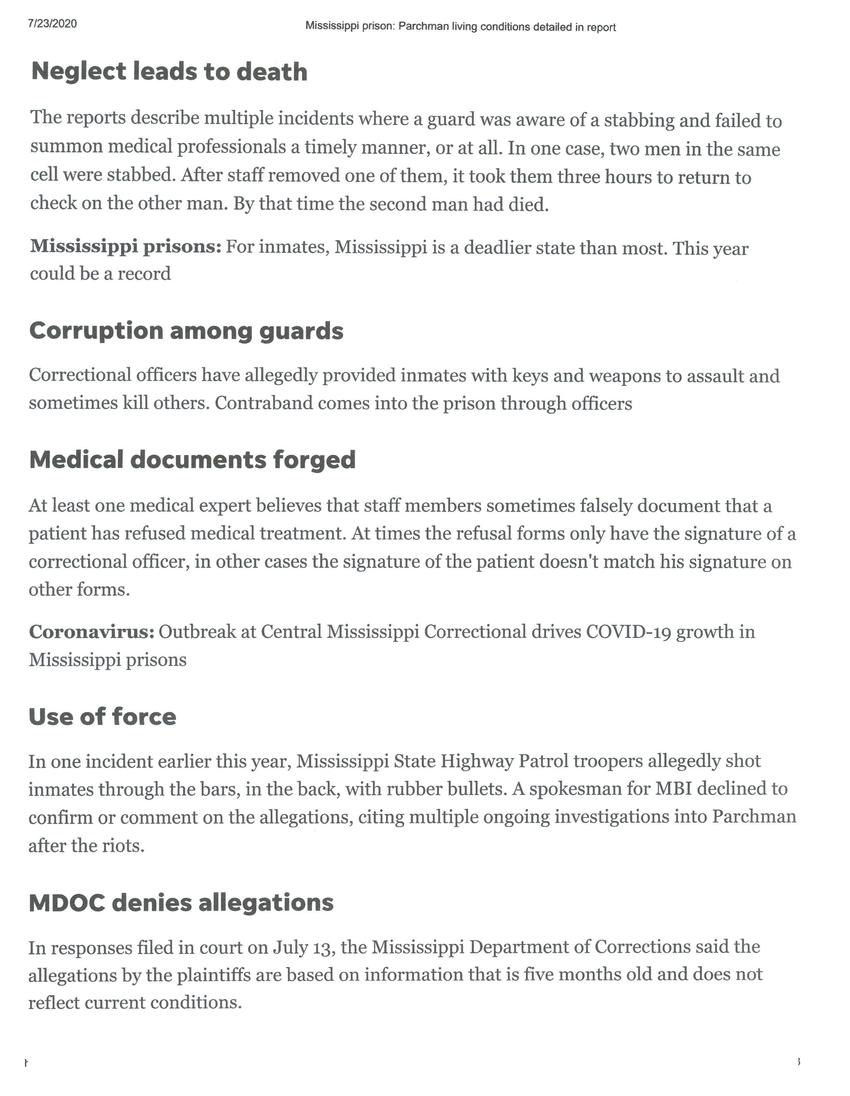 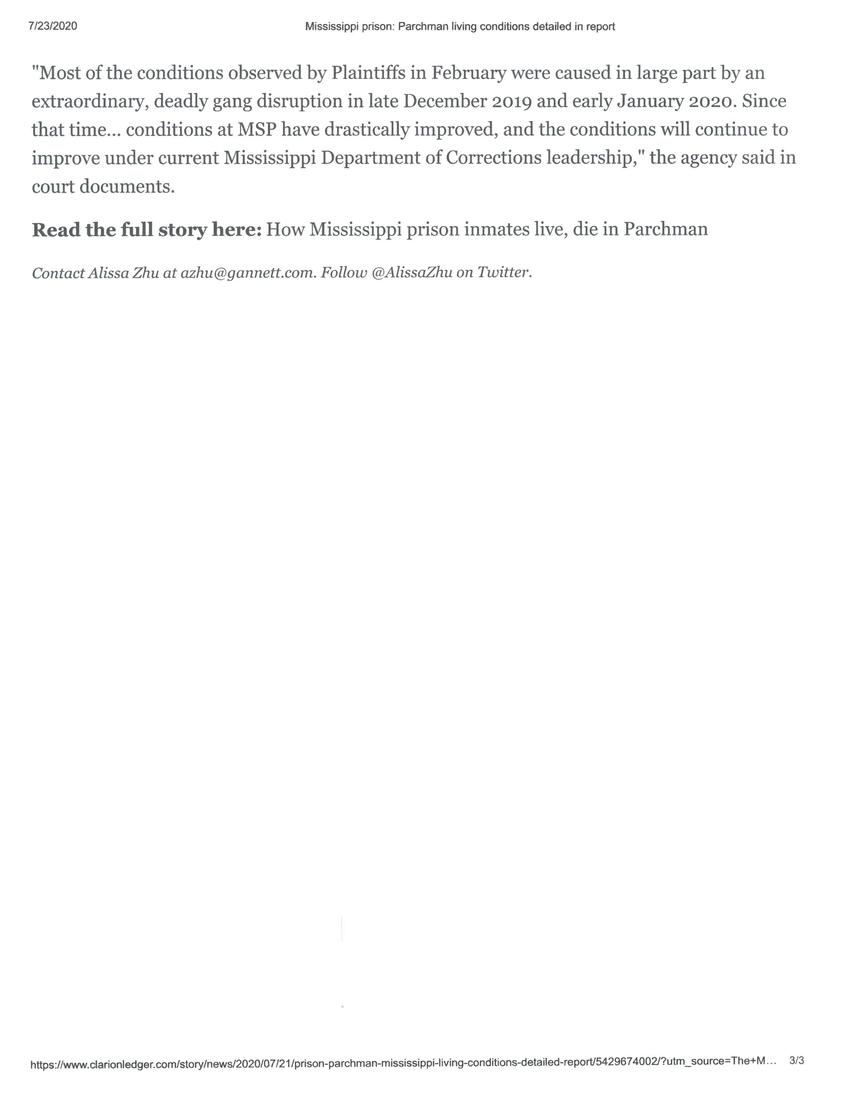 The Mississippi State Penitentiary at Parchman is so understaffed that inmates sometimes resort to threatening self harm and setting fires to seek help for severely injured or sick men, according to experts hired to report on the conditions inside the prison as part of an ongoing lawsuit against corrections officials.

Their reports describe food that comes undercooked, or spoiled, and covered in insects or rat feces, if delivered at all. Water inmates drink and use to wash their clothes that is brown and foul-smelling. Housing units without heat or air conditioning are covered in mold, dilapidated and filthy.

The experts hired by Team Roc spent days at Parchman in February, inspecting housing units and speaking with the men named in the lawsuit. Their findings are now public alongside excerpts of interviews and handwritten statements by inmates. The Clarion Ledger read through hundreds of pages of court documents to bring you this story as part of ongoing coverage of Mississippi's prison crisis.

Here are five claims revealed in court documents from the Parchman lawsuit:
Setting fires as a call for help

Prisoners said that when yelling and banging on walls does not draw guards, they have set fires to get help for those who are injured and ill — including a diabetic patient who didn't receive insulin for three days and a man who was urinating blood.
Neglect leads to death

The reports describe multiple incidents where a guard was aware of a stabbing and failed to summon medical professionals a timely manner, or at all. In one case, two men in the same cell were stabbed. After staff removed one of them, it took them three hours to return to check on the other man. By that time the second man had died.

Mississippi prisons: For inmates, Mississippi is a deadlier state than most. This year could be a record
Corruption among guards

Correctional officers have allegedly provided inmates with keys and weapons to assault and sometimes kill others. Contraband comes into the prison through officers
Medical documents forged

At least one medical expert believes that staff members sometimes falsely document that a patient has refused medical treatment. At times the refusal forms only have the signature of a correctional officer, in other cases the signature of the patient doesn't match his signature on other forms.

In one incident earlier this year, Mississippi State Highway Patrol troopers allegedly shot inmates through the bars, in the back, with rubber bullets. A spokesman for MBI declined to confirm or comment on the allegations, citing multiple ongoing investigations into Parchman after the riots.
MDOC denies allegations

In responses filed in court on July 13, the Mississippi Department of Corrections said the allegations by the plaintiffs are based on information that is five months old and does not reflect current conditions.

"Most of the conditions observed by Plaintiffs in February were caused in large part by an extraordinary, deadly gang disruption in late December 2019 and early January 2020. Since that time... conditions at MSP have drastically improved, and the conditions will continue to improve under current Mississippi Department of Corrections leadership," the agency said in court documents.