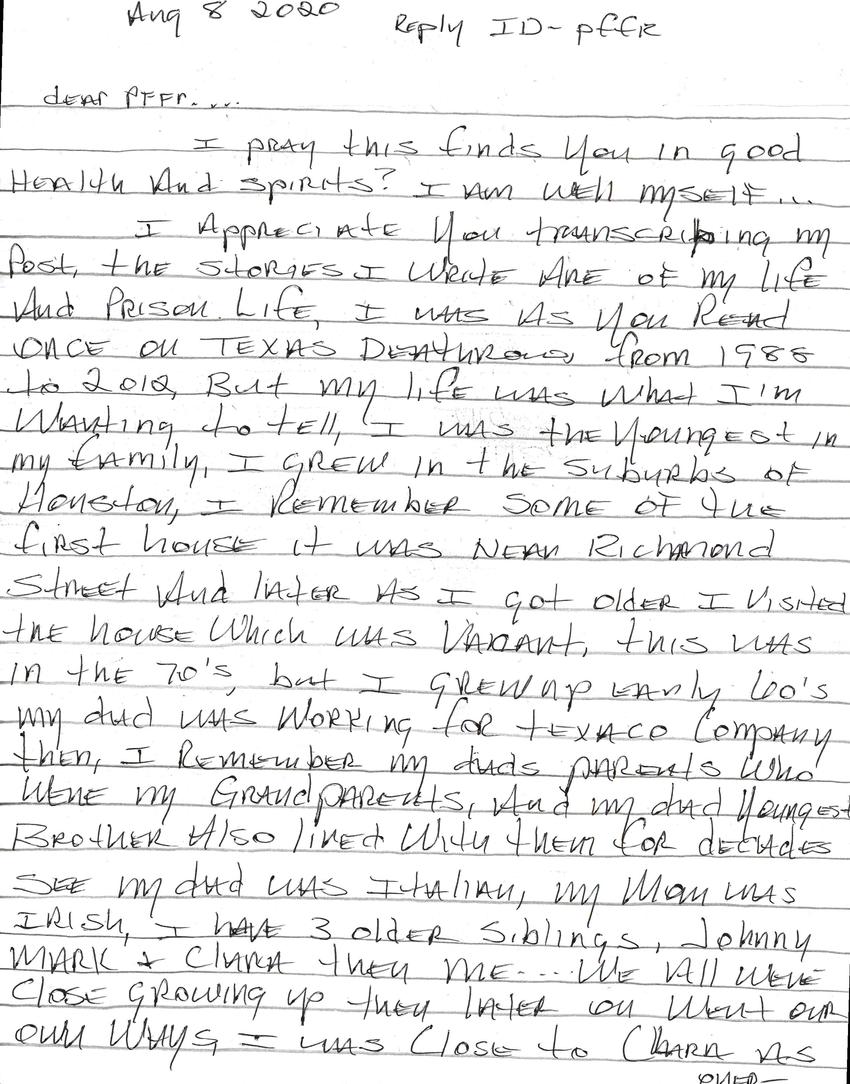 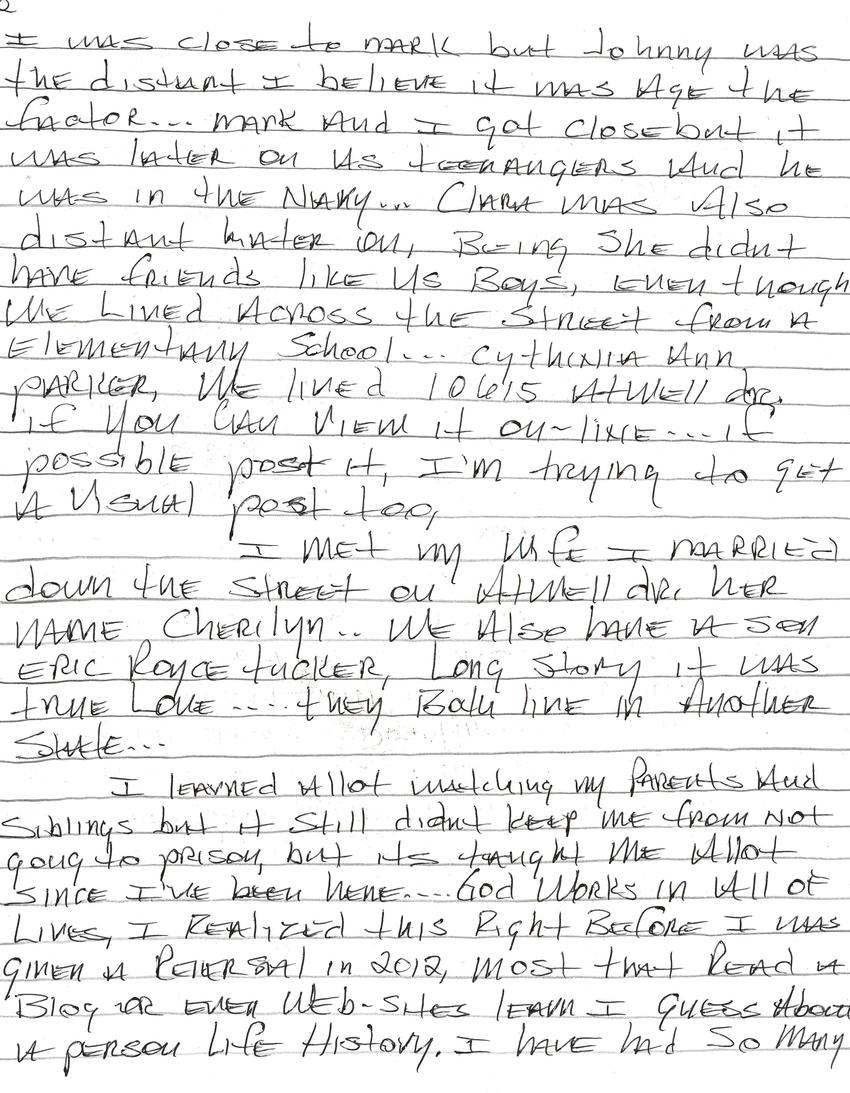 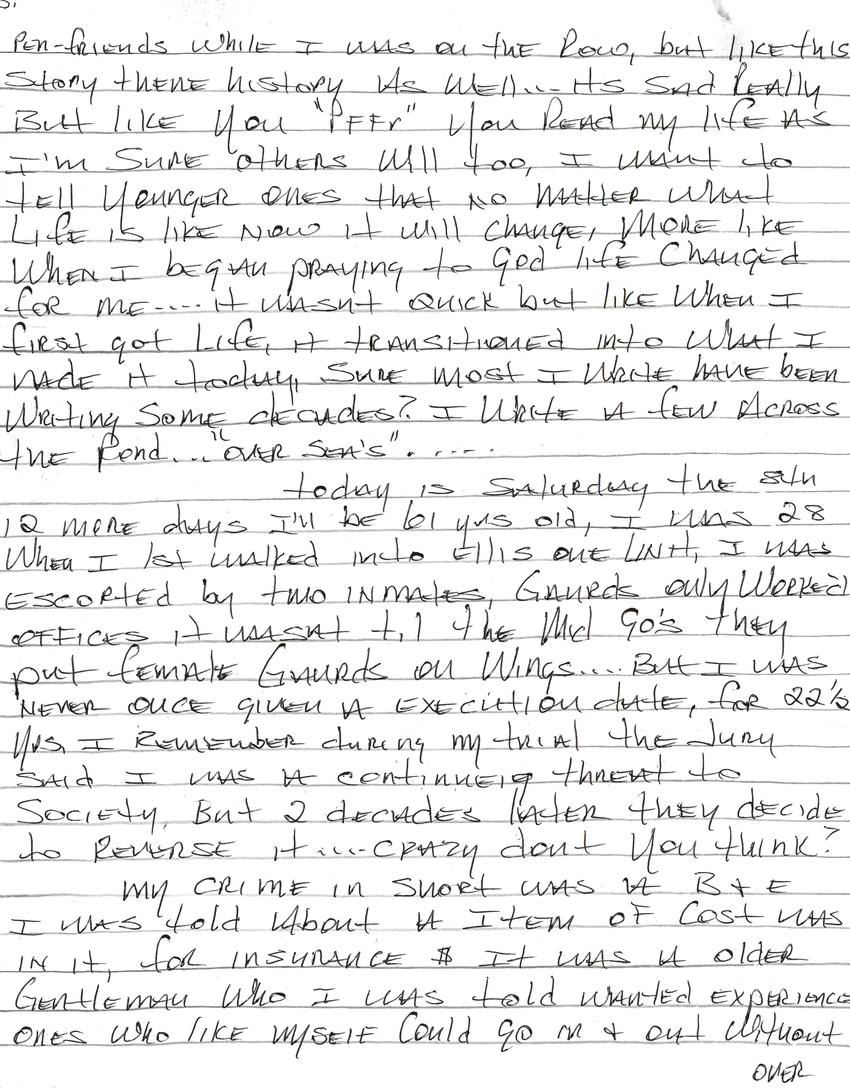 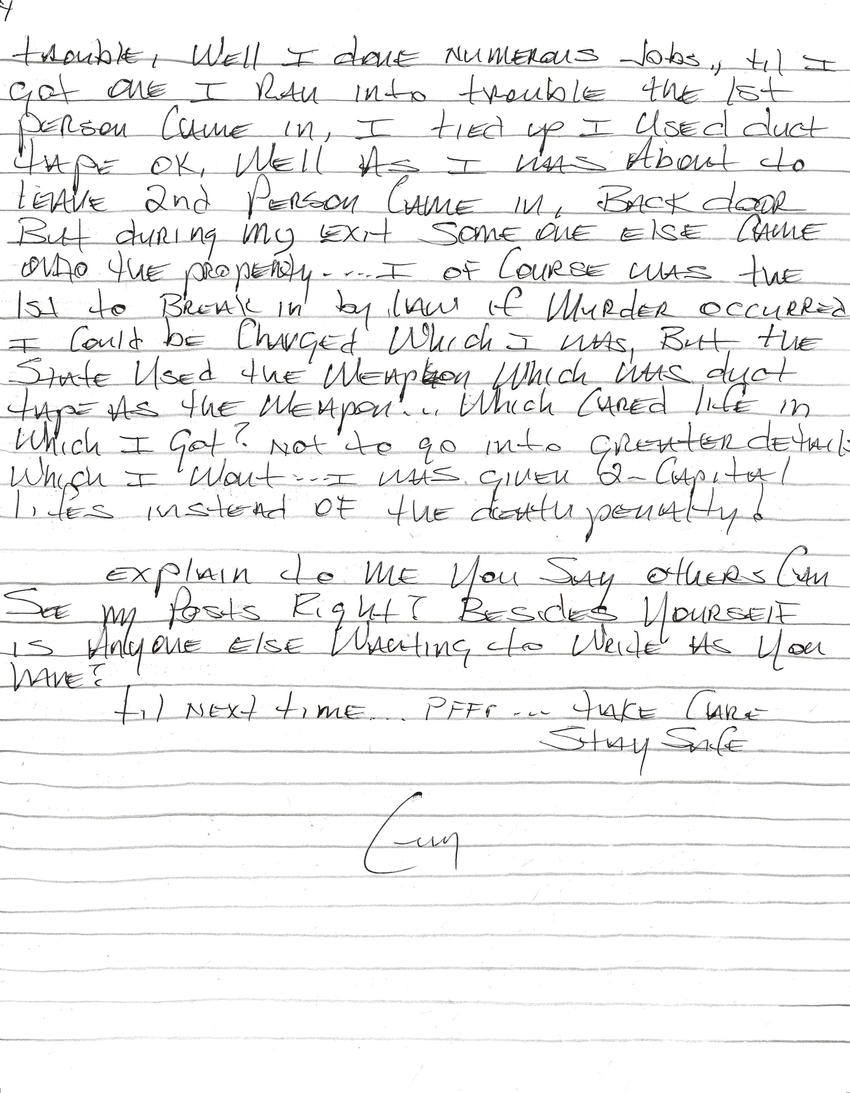 I pray this finds you in good health and spirits? I am well myself...
I appreciate you transcribing my post, the stories I write are of my life and prison life, I [?] as you read once [?] Texas death row from 1988 to 2012. But my life was what I'm wanting to tell, I was the youngest in my family, I grew in the suburbs of Houston, I remember some of the first house it was near Richmond Street and later as I got older I visited the house which was vacant. This was in the 70's, but I grew up early 60's my dad was working for texaco company then. I remember my dads parents who were my grandparents and my dad youngest brother also lived with them for decades. See my dad was Italian, my mom was Irish, I have 3 older siblings, Johnny, Mark + Clara then me. We all were close growing up they later on went our own ways, I was close to Clara as [?]. I was close to Mark but to Johnny was the distant I believe it was age the factor. Mark and I got close but it was later on as teenagers and he was in the navy. Clara was also distant later on, being she didn't have friends like us boys, even though we lived across the street from a elementary school. Cynthia Ann Parker, we lived 10615 Atwell dr. if you can view it online...if possible post it. I'm trying to get a usual post too.

I met my wife I married down the street on Atwell dr. Her name Cherilyn. We also have a son Eric Royce Tucker, long story it was true love. They both live in another state.

I learned a lot watching my parents and siblings but it still didn't keep me from not going to prison, but its taught me a lot. Since I've been here..God works in all of lives, I realized this right before I was given a [?] in 2012, most that read a blog or even websites learn I guess about a person life history. I have had so many pen-friends while I was on the row, but like this story there history as well. It's sad really but like you "pffr" you read my life as I'm sure others will too, I want to tell younger ones that no matter what life is like now it will change. More like when I began praying to god like changed for me. It wasn't quick but like when I first got life, it transitioned into what I made it today. Sure most I write have been writing some decade? I write a few across the pond..."overseas"

Today is Saturday the [?] 12 more days I'll be 61 yrs old, I was 28 when I 1st walked into Ellis one unit, I was escorted by two inmates. Guards only worked offices it wasn't til the mid 90's they put female guards on wings. But I was never once given a execution date for 22 1/2 yrs. I remember during my trial the jury said I was a continuing threat to society, but 2 decades later they. decide to reverse it...crazy don't you think?

My crime in short was a B+E. I was told about a item of cost was in it, for insurance money. It was a older gentleman who I was told wanted experience ones who like myself could go rn + out without trouble. Well I done numerous jobs, til I got one I ran into trouble the 1st person came in, I tied up I used duct tape ok, well as I was about to leave 2nd person came in backdoor. But during my exit someone else came onto the property..I of course was the 1st to break in by law if murder occurred. I could be charged which I was, but the Stated used the weapon which was duct tape as the weapon..Which [?] life in which I got? Not to go into greater details which I won't...I. was given 2-capital lifes instead of the death penalty!

Explain to me you say others can see my post right? Besides yourself is anyone else wanting to write as you have?

Til next time...pffr...take care
stay safe

Thanks for writing! I finished the transcription for your post. To answer your question a lot of people have access to read your letter. Thank you for sharing your story. I hope to be able to read about more of your stories in the future. Thank you and take care!
(scanned reply – view as blog post)
uploaded Sept. 17, 2020.  Original (PDF) 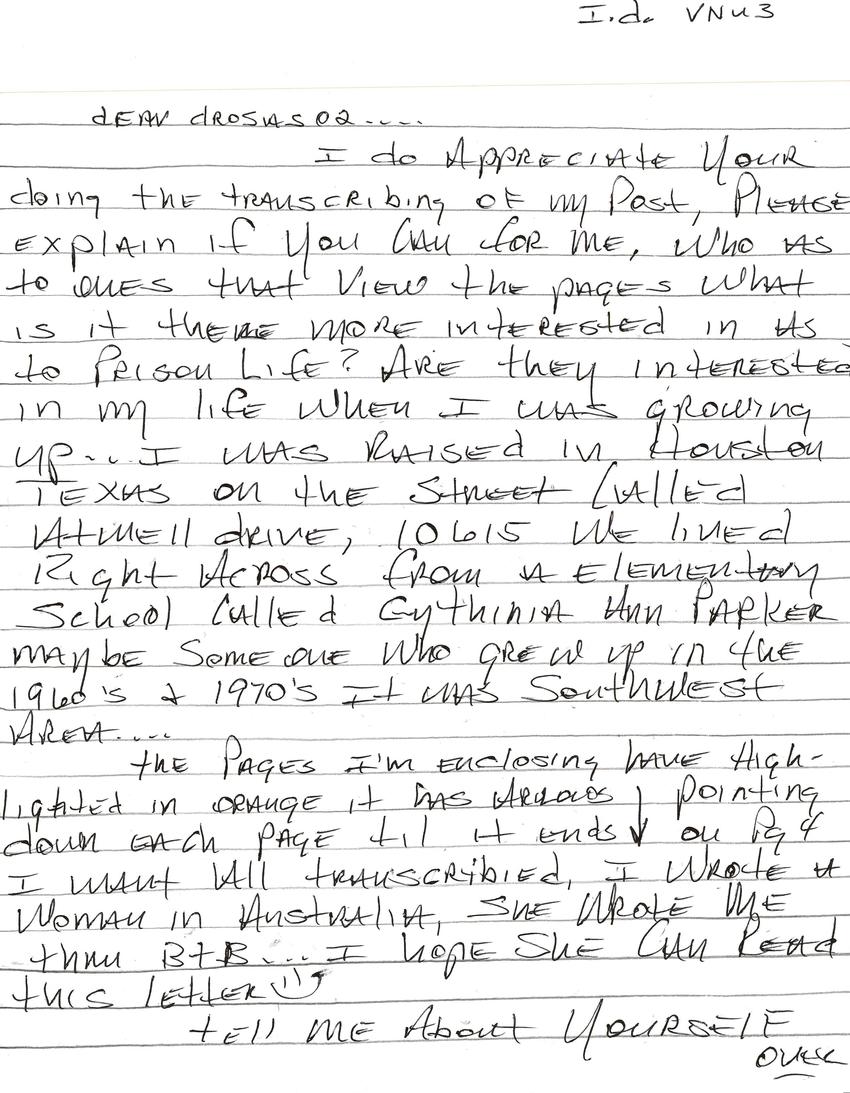 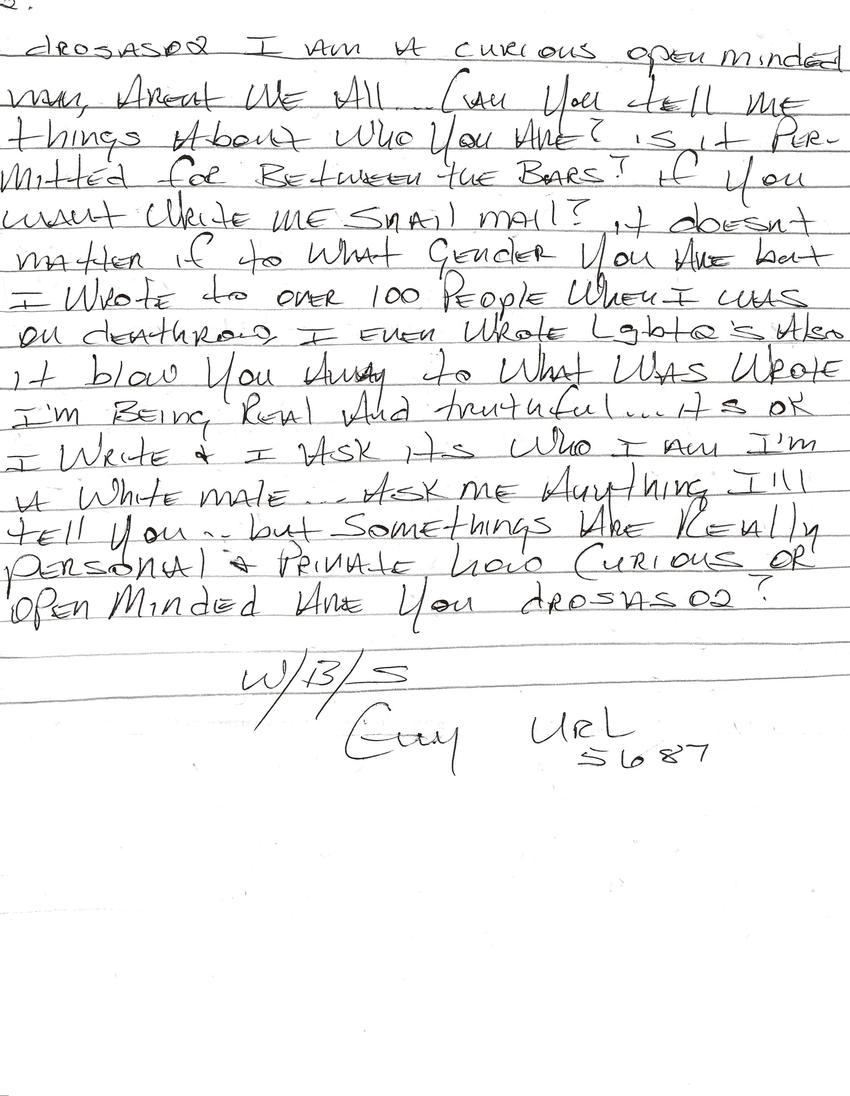 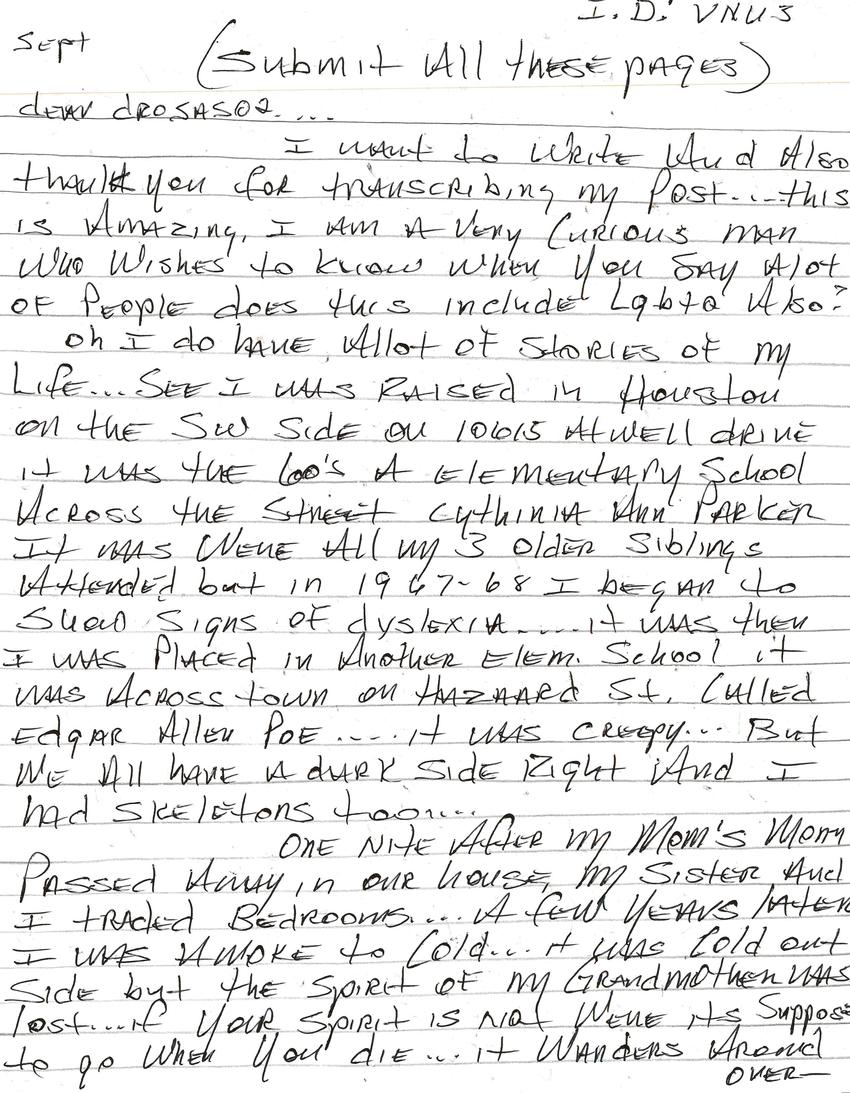 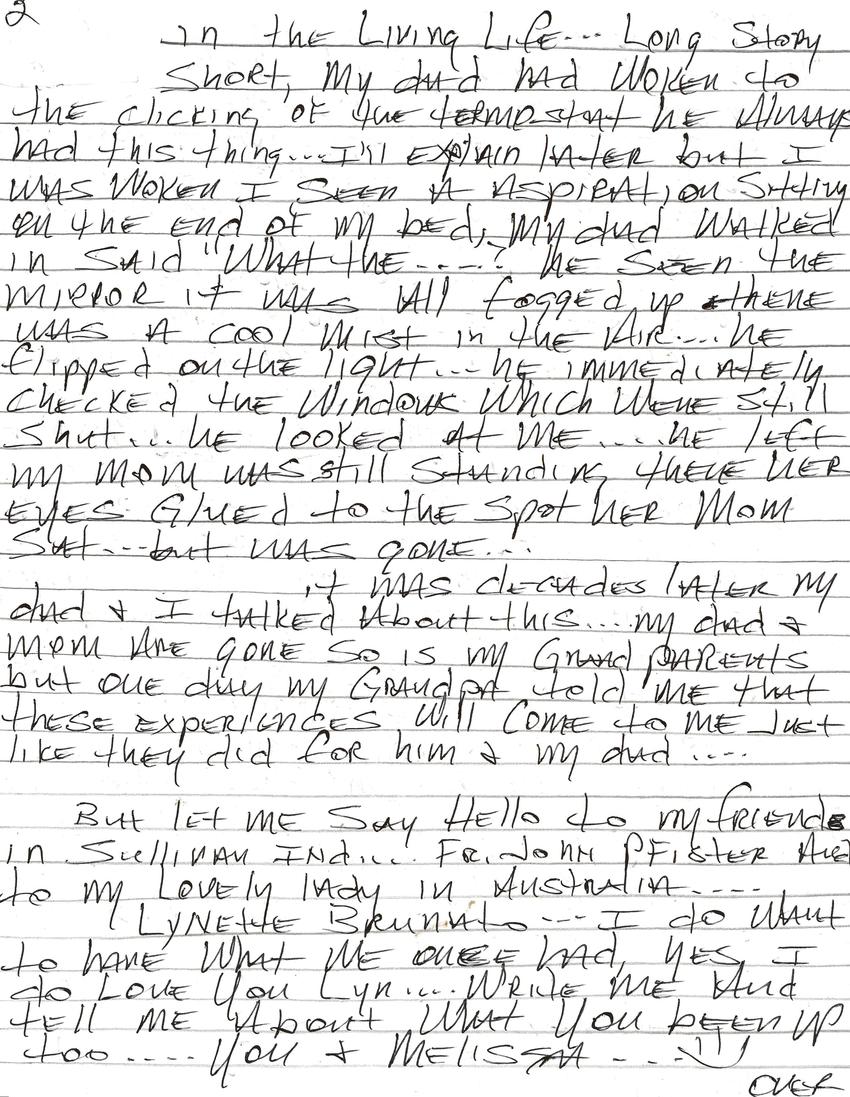 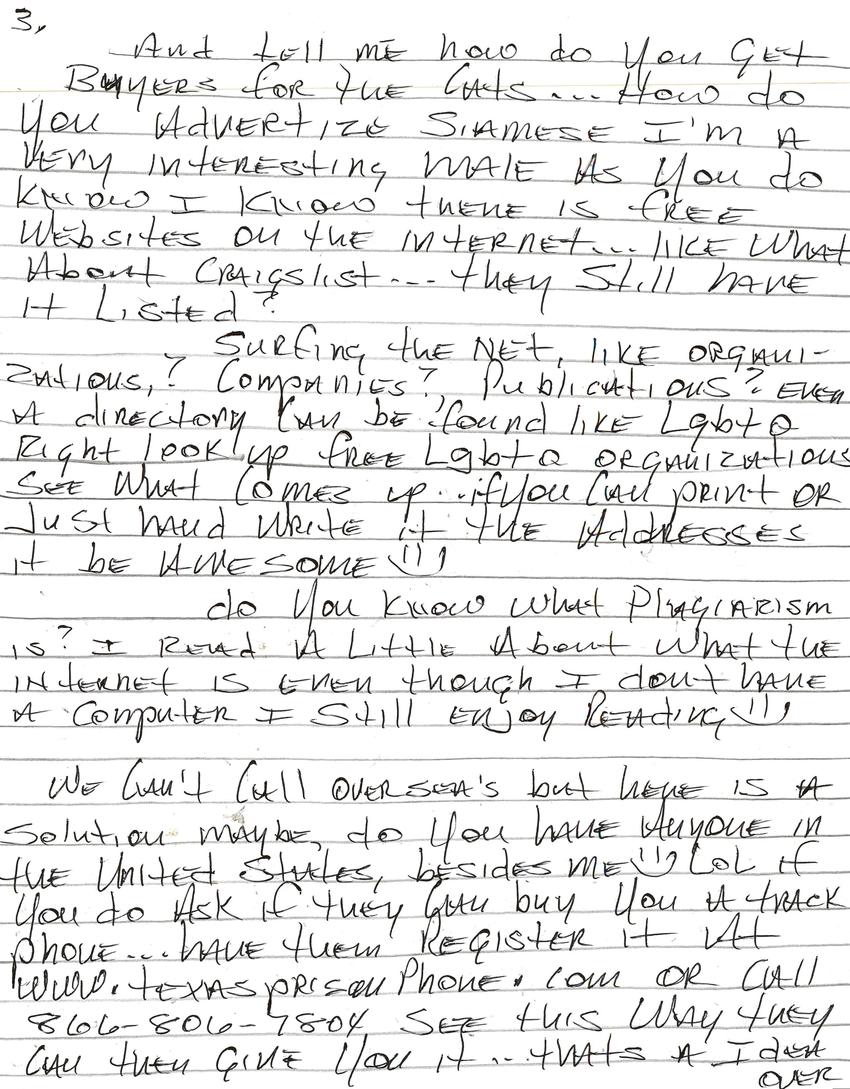 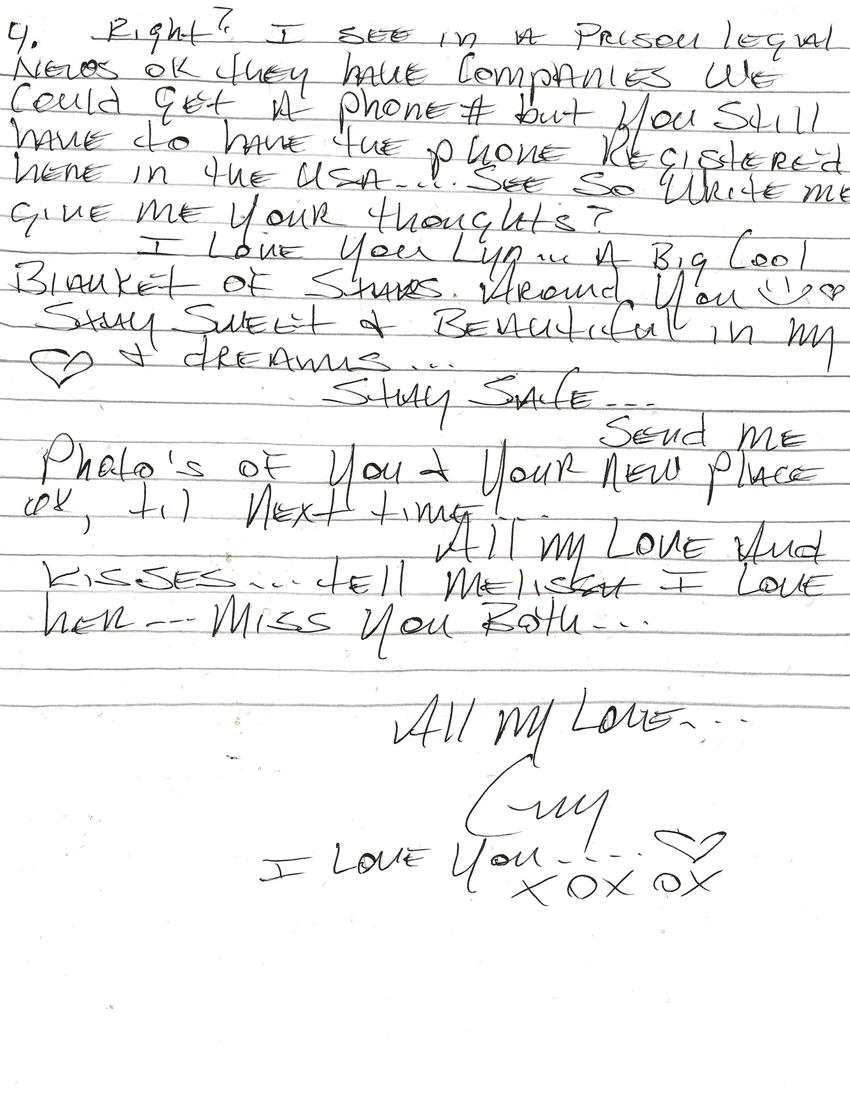