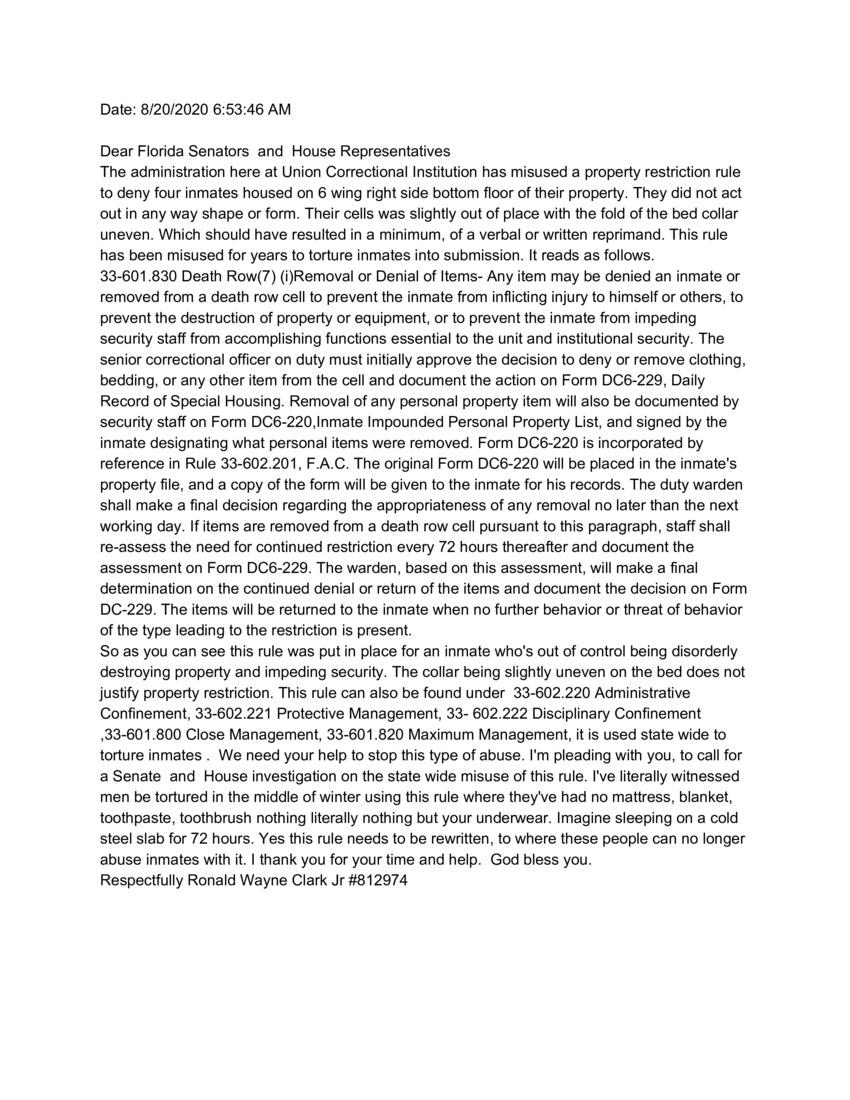 Dear Florida Senators and House Representatives
The administration here at Union Central Institution has misused a property restriction rule to deny four inmates housed on 6 wing right side bottom floor of their property. They did not act out in any way shape or form. their cells was slightly out of place with the fold of the bed collar uneven. Which should have resulted in a minimum of a verbal or written reprimand. This rule has been misused for years to tortured inmates into submission. It reads as follows 33-601.830 Death Row(7) (i)Removal or Denial of Items, or to prevent inmate from inflicting injury to himself or others, to prevent the destruction of property or equipment, or to prevent the inmate from impeding security staff from accomplishing functions essential to the unit and institutional security. The senior correctional officer on duty must initially approve the decision to deny or remove clothing, bedding, or any other item from the cell and document the action on Form DC6-229, Daily Record of Special Housing. Removal of any personal property item will also be documented by security staff on Form DC6-220,Inmate Impounded Personal Property List, and signed by the inmate designating what personal items were removed. Form DC6-220 is incorporated by reference rule 33-602.201, F.A.C. The original Form DC6-220 will be placed in the inmate's property file, and a copy of the form will be given to inmate for his records. The duty warden shall make a final decision regarding the appropriateness of any removal no later than the next working day. If items are removed from a death row cell pursuant to this paragraph, staff shall re-access the need for continued restriction every 72 hours thereafter and document the assessment on Form DC6-229. The warden, based on this assessment, will make a final determination on the continued denial or returned of the items no further behavior or threat of the type leading to the restrictions present.
So as you can see this rule was put in place for an inmate who's out of control being disorderly destroying property and impeding security. The collar being slightly uneven on the bed does not justify property restriction. This rule can also be found under 33-602.222 Administrative Confinement,33-602.800 Close Management,33-601.820 Maximum Management, it is used state wide to torture inmates . We need your help to stop this type of abuse. I'm pleading with you, to call for a Senate and House investigation on the state wide misuse of this rule. I've literally witnessed men be tortured in the middle of winter using this rule where they've had no mattress, blanket, toothpaste, toothbrush nothing literally nothing but your underwear. Imagine sleeping on a cold steel slab for 72 hours. Yes this rule needs to be rewritten, to where these people can no longer abuse inmates with it. I thank you for your time and help. God bless you.
Respectfully Ronald Wayne Clark Jr #812974