An Open Letter To Governor Tate Reeves And MDOC 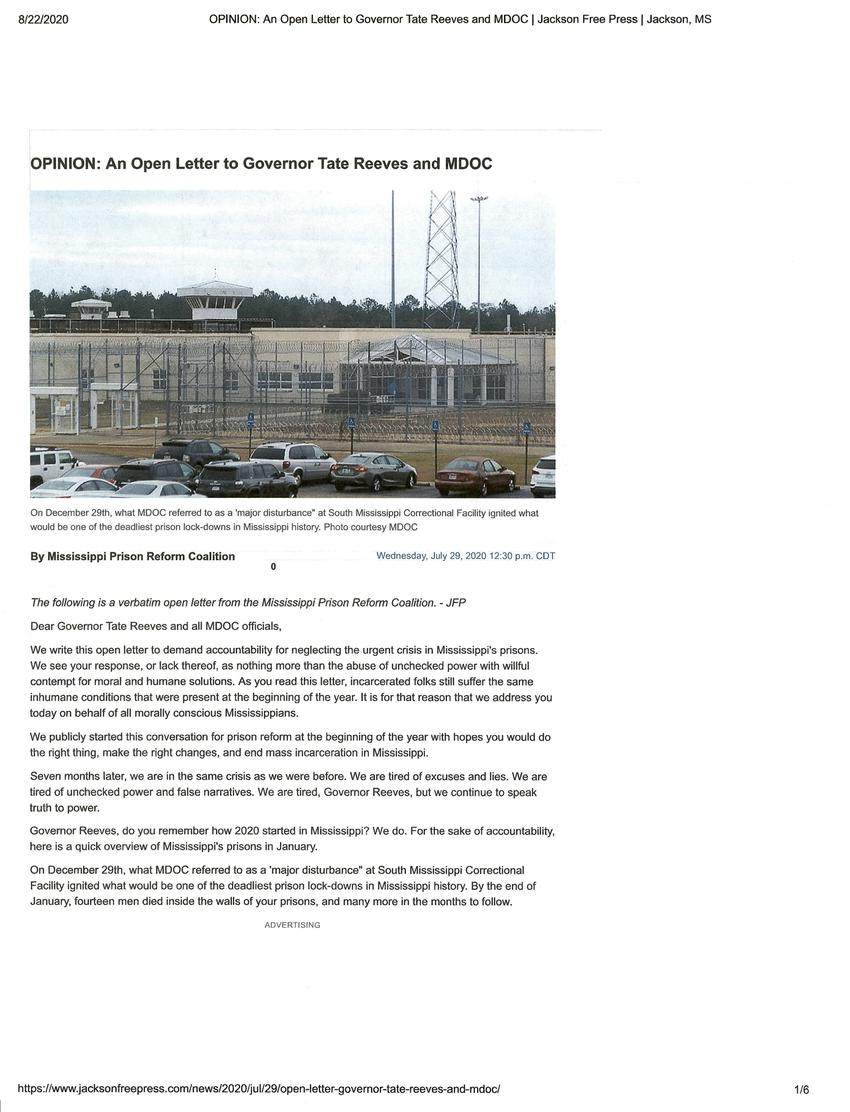 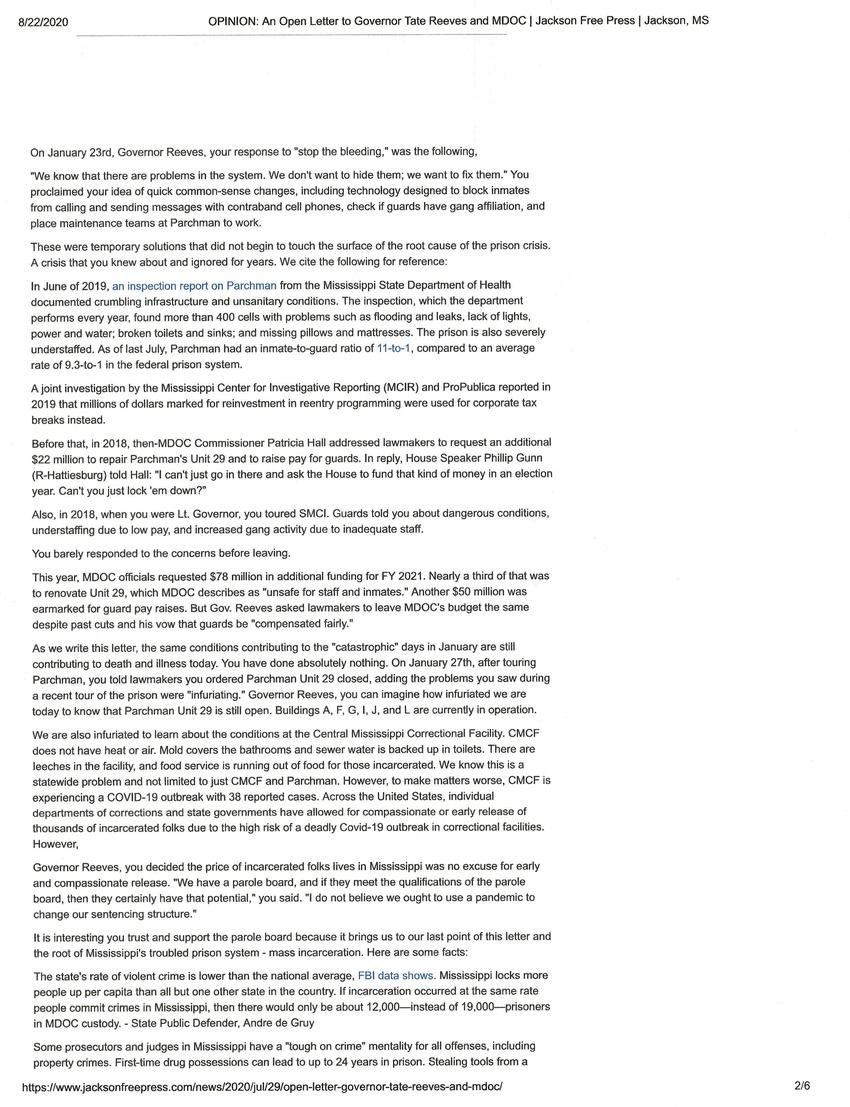 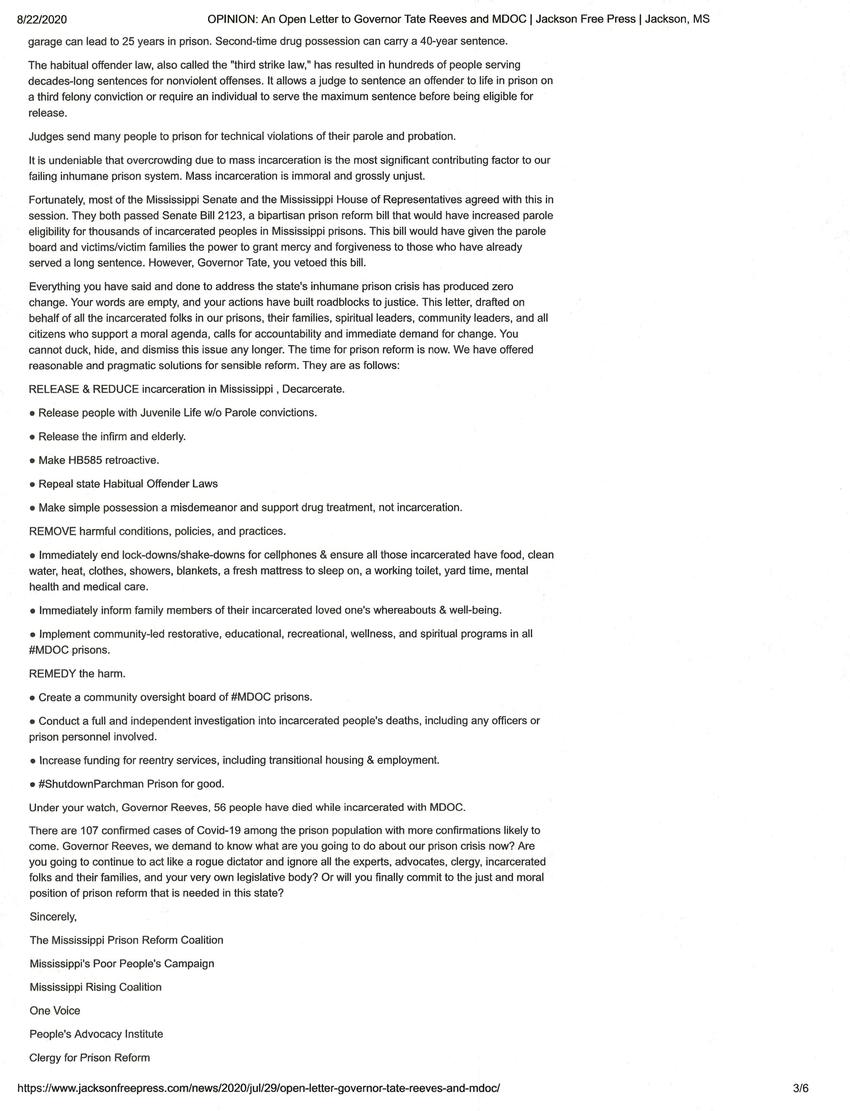 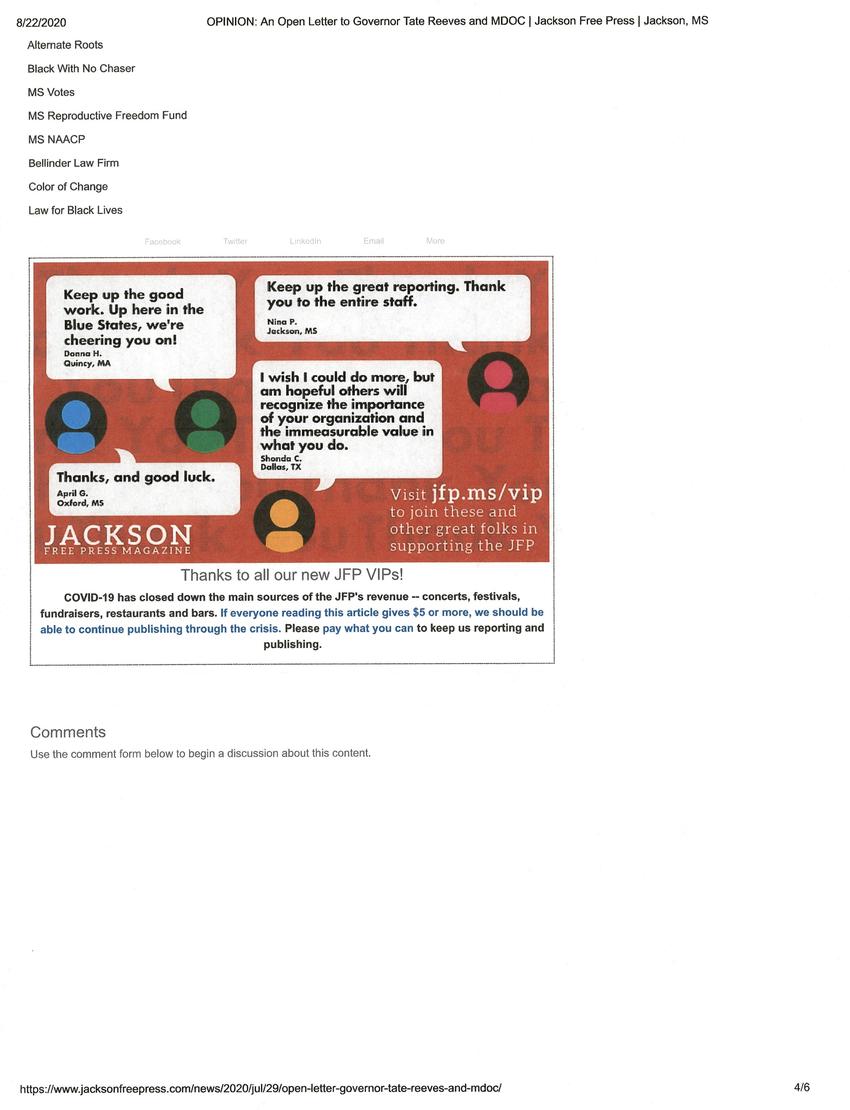 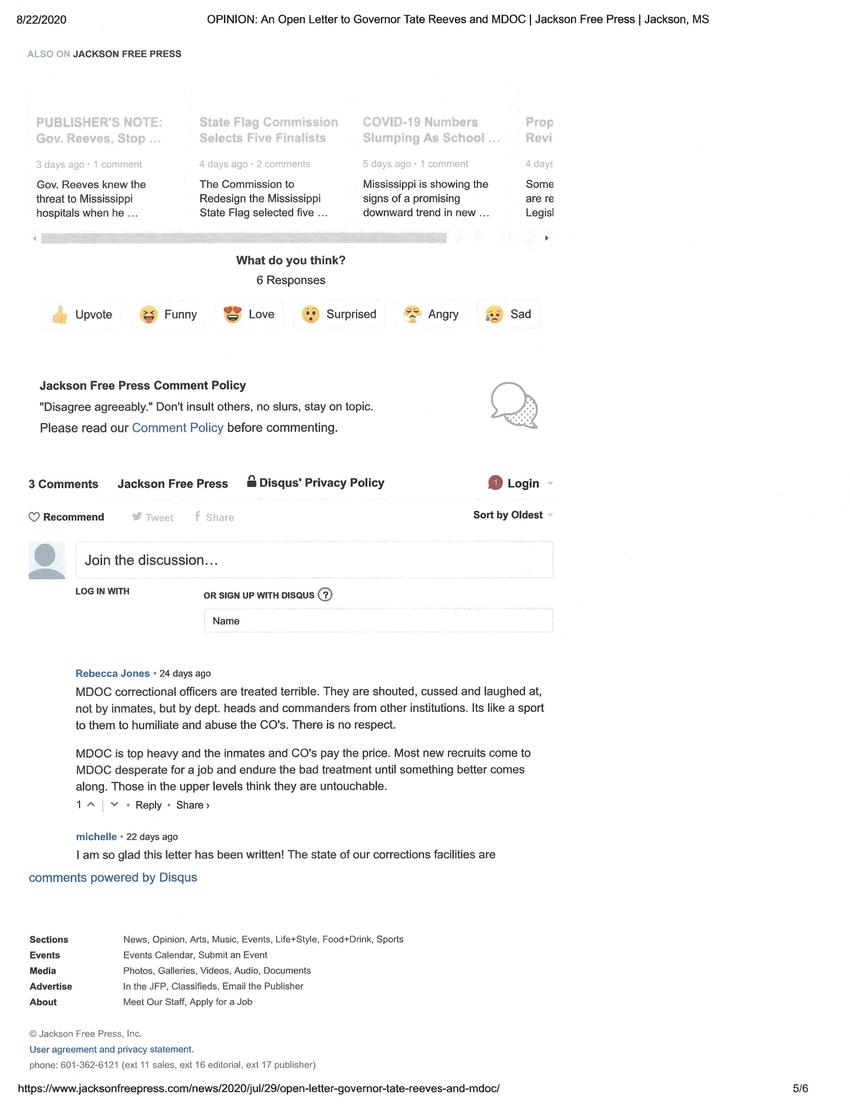 OPINION: An Open Letter to Governor Tate Reeves and MDOC

[On December 29th, what MDOC referred to as a "major disturbace" at South Mississippi Correctional Facility ignited what would be one of the deadliest prison lock-downs in Mississippi history. Photo courtesy MDOC]

The following is a verbatim open letter from the Mississippi Prison Reform Coalition. -JFP

We write this open letter to demand accountability for neglecting the urgent crisis in Mississippi's prisons. We see your response, or lack thereof, as nothing more than the abuse of unchecked power with willful contempt for moral and humane solutions. As you read this letter, incarcerated folks still suffer the same inhumane conditions that were present at the beginning of the year. It is for that reason that we address you today on behalf of all morally conscious Mississippians.

We publicly started this conversation for prison reform at the beginning of the year with hopes you would do the right thing, make the right changes, and end mass incarceration in Mississippi.

Governor Reeves, do you remember how 2020 started in Mississippi? We do. For the sake of accountability, here is a quick overview of Mississippi's prisons in January.

On December 29th, what MDOC referred to as a "major disturbance" at South Mississippi Correctional Facility ignited what would be one of the deadliest prison lock-downs in Mississippi history. By the end of January, fourteen men died inside the walls of your prisons, and many more in the months to follow.

On January 23rd, Governor Reeves, your response to "stop the bleeding," was the following,

"We know that htere are problems in the system. We don't want to hide them; we want to fix them." You proclaimed your idea of quick common-sense changes, including technology designed to block inmates from calling and sending messages with contraband cell phones, check if guards have gang affilliation, and place maintenance teams at Parchman to work.

These were temporary solutions that did not begin to touch the surface of the root cause of the prison crisis. A crisis that you knew about and ignored for years. We cite the following for reference:

In June of 2019, an inspection report on Parchman from the Mississippi State of Department of Health documented the crumbling infrastructure and unsanitary conditions. The inspection, which the department performs every year, found more than 400 cells with problems such as flooding and leaks, lack of lights, power and water; broken toilets and sinks; and missing pillows and mattresses. The prison is also severely understaffed. As of last July, Parchman had an inmate-t-guard ratio of 11-to-1, compared to an average rate of 0.3-to-1 in the federal prison system.

A joint investigation by the Mississippi Center for Investigative Reporting (MCIR) and ProPublica reported in 2019 that millions of dollars marked for reinvestment in reentry programming were used for corporate tax breaks instead.

Before that, in 2018, then-MDOC Commissioner Patricia Hall addressed lawmakers to request an additional $22 million to repair Parchman's Unit 29 and to raise pay for guards. In reply, House Speaker Phillip Gunn (R-Hattiesburg) told Hall: "I can't just go in there and ask the House to fund that kind of money in an election year. Can't you just lock 'em down?

Also, in 2018, when you were Lt. Governor, you toured SMCI. Guards told you about dangerous conditions, understaffing due to low pay, and increased gang activity due to inadequate staff.

You barely responded to the concerns before leaving.

This year, MDOC officials requested $78 million in additional funding for FY 2021. Nearly a third of that was to renovate Unit 29, which MDOC describes as "unsafe for staff and inmates." Another $50 million was earmarked for guard pay raises. But Gov. Reeve asked lawmakers to leave MDOC's budget the same despite past cuts and his vow that guards be "compensated fairly."

As we write this letter, the same conditions contributing to the "catastrophic" days in January are still contributing to death and illness today. You have done absolutely nothing. On January 27th, after touring Parchman, you told lawmakers you ordered Parchman Unit 29 closed, adding the problems you saw during a recent tour of the prison were "infuriating." Governor Reeves, you can imagine how infuriated we are today to know that Parchman Unit 29 is still open. Buildings A, F, G, I, J, and L are currently in operation.

We are also infuriated to learn about the conditions at the Central Mississippi Correctional Facility. CMCF does not have heat or air. Mold covers the bathrooms and sewer water is backed up in the toilets. There are leeches in the facility, and food service is running out of food for those incarcerated. We know this is a statewide problem and not limited to just CMCF and Parchman. However, to make matters worse, CMCF is experiencing a COVID-19 outbreak with 38 reported cases. Across the United States, individual departments of corrections and state governments have allowed for compassionate or early release of thousands of incarcerated folks due to the high risk of a deadly Covid-19 outbreak in correctional facilities. However,

Governor Reeves, you decided the price of incarcerated folks lives in Mississippi was no excuse for early and compassionate release. "We have a parole board, and if they meet the qualifications of the parole board, then they certainly have that potential," you said. "I do not believe we ought to use a pandemic to change our sentencing structure."

It is interesting you trust and support the parole board because it brings us to our last point of this letter and the root of Missippi's troubled prison system - mass incarceration. Here are some facts:

The state's rate of violent crime is lower than the national average, FBI data shows. Mississippi locks more people up per capita than all bu one other state in the country. If incarceration occurred at the same rate people commit crimes in Mississippi, then there would only be about 12,000 - instead of 19,000 - prisoners in MDOC custody. - State Public Defender, Andrew de Gruy

The habitual offender law, also called the "third strike law," has resulted in hundreds of people serving decades-long sentences for nonviolent offenses. It allows a judge to sentence an offender to life in prison on a third felony conviction or require an individual to serve the maximum sentence before being eligible for release.

Judges send many people to prison for technical violations of their parole and probation.

Fortunately, most of the Mississippi Senate and the Mississippi House of Representatives agreed with this in session. They both passed Senate Bill 2123, a bipartisan prison reform bill that would have increased parole eligibility for thousands of incarcerated peoples in Mississippi prisons. This bill would have given the parole board and victims/victim families the power to grant mercy and forgiveness to those who have already served a long sentence. However, Governor Tate, you vetoed this bill.

Everything you have said and done to address the state's inhumane prison crisis has produced zero change. Your words are empty, and your actions have built roadblocks to justice. This letter, drafted on behalf of all the incarcerated folks in our prisons, their families, spiritual leaders community leaders, and all citizens who support a moral agenda, calls for accountability and immediate demand for change. You cannot duck, hide, and dismiss this issue any longer. The time for prison reform is now. We have offered reasonable and pragmatic solutions for sensible reform. They are as follows:

- Release the infirm and elderly.

- Create a community oversight board of #MDOC prisons.

- Conduct a full and independent investigation into incarcerated people's deaths, including any officers or prison personnel involved.

Under your watch, Governor Reeves, 56 people have died while incarcerated with MDOC.

There are 107 confirmed cases of Covid-19 among the prison population with more confirmations likely to come. Governor Reeves, we demand to know what you are going to do about our prison crisis now? Are you going to continue to act like a rogue dictator and ignore all the experts, advocates, clergy, incarcerated folks and their familis, and your very own legislative body? Or will you finally commit to the just and moral position of prison reform that is needed in this state?

Black With No Chaser

Thanks for writing! I finished the transcription for your post. Feel free to double check for any clerical errors I may have missed!