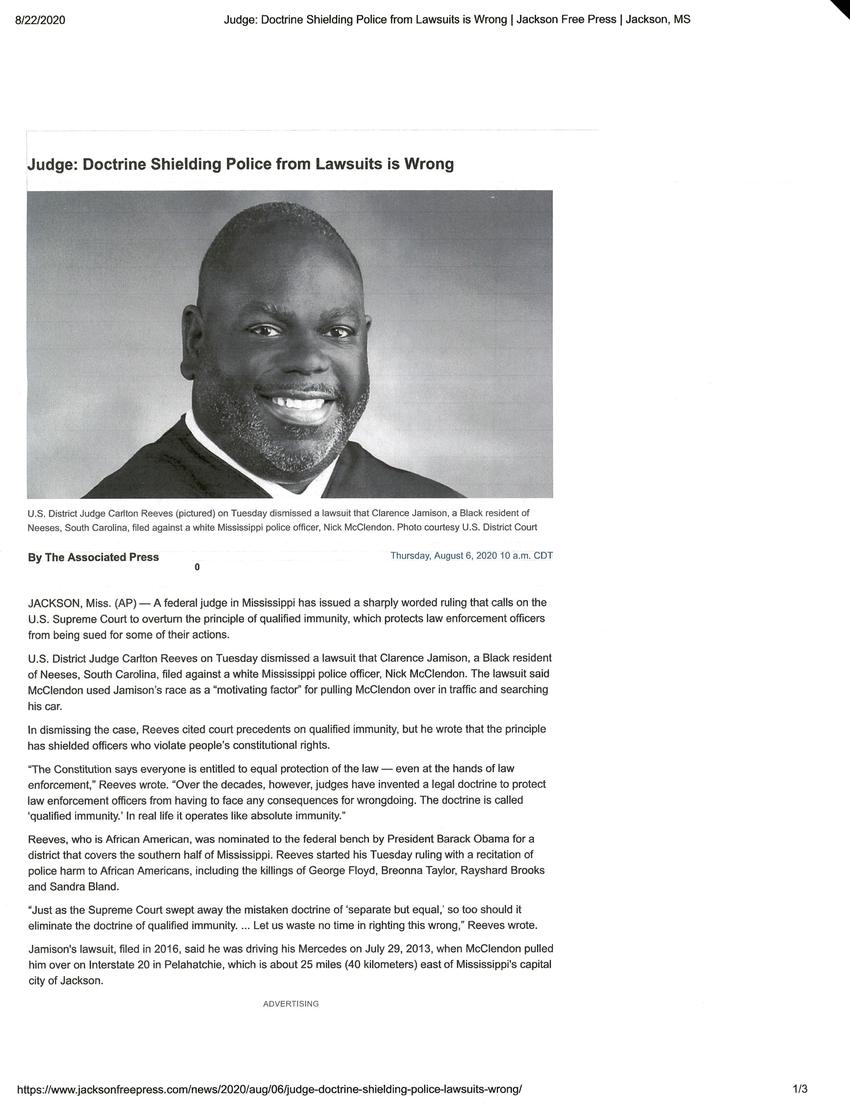 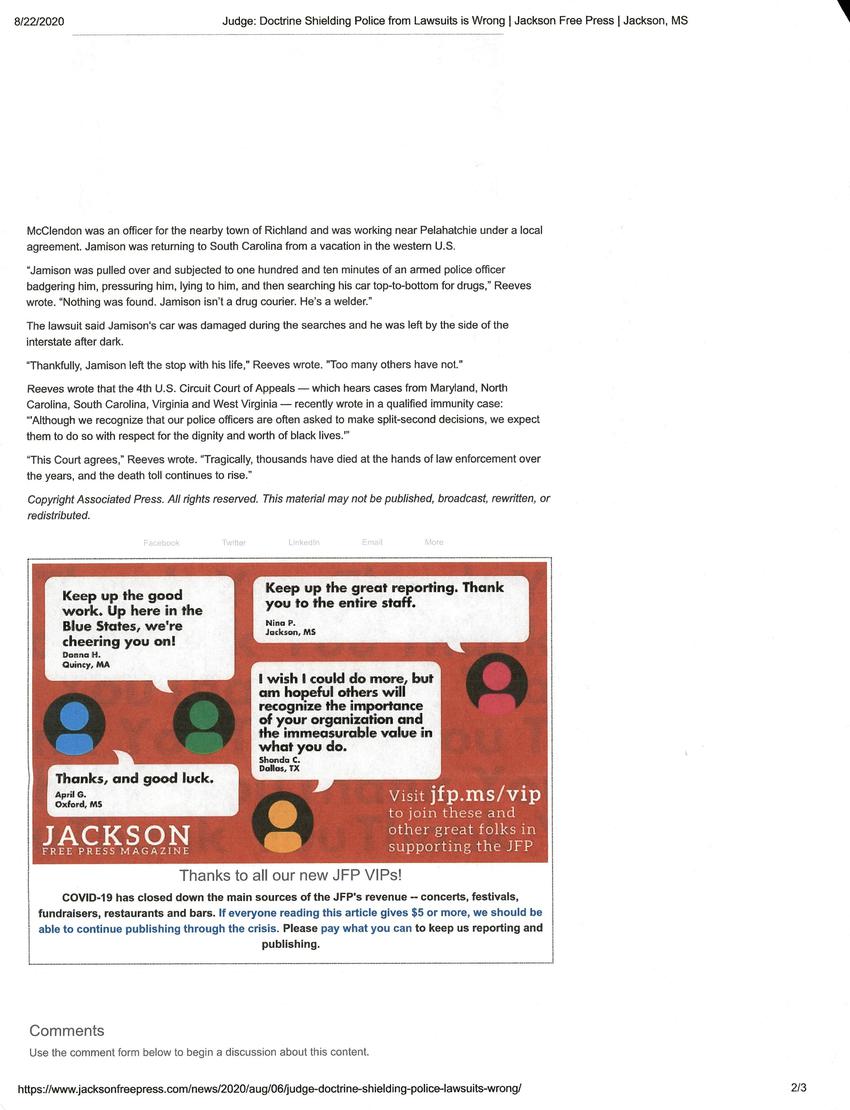 JACKSON, Miss. (AP) -- A federal judge in Mississippi has issued a sharply worded ruling that calls on the U.S. Supreme Court to overturn the principle of qualified immunity, which protects law enforcement officers from being sued for some of their actions.

U.S. District Judge Carlton Reeves on Tuesday dismissed a lawsuit that Clarence Jamison, a Black resident of Neeses, South Carolina, filed against a white Mississippi police officer, Nick McClendon. The lawsuit said McClendon use Jamison's race as a "motivating factor" for pulling McClendon over in traffic and searching his car.

In dismissing the case, Reeves cited court precedents on qualified immunity, but he wrote that the principle has shielded officers who violate people's constitutional rights.

"The Constitution says everyone is entitled to equal protection of the law -- even at the hands of law enforcement," Reeves wrote. "Over the decades, however, judges have invented a legal doctrine to protect law enforcement officers from having to face any consequences for wrongdoing. The doctrine is called "qualified immunity." In real life, it operates like absolute immunity."

Reeves, who is African American, was nominated to the federal bench by President Barack Obama for a district that covers the southern half of Mississippi. Reeves started his Tuesday ruling with a recitation of police harm to African Americans, including the killings of George Floyd, Breonna Taylor, Rayshard Brooks, and Sandra Bland.

Justice as the Supreme Court swept away the mistaken doctrine of 'separate but equal,' so too should it eliminate the doctrine of qualified immunity. "... Let us waste no time in righting this wrong," Reeves wrote.

Jamison's lawsuit, filed in 2016, said he was driving his Mercedes on July 29, 2013 when McClendon pulled him over on Interstate 20 in Pelahatchie, which is about 25 miles (40 kilometers) east of Mississippi's capital city of Jackson.

McClendon was an officer for the nearby town of Richland and was working near Pelahatchie under a local agreement. Jamison was returning to South Carolina from a vacation in the western U.S.

"Jamison was pulled over and subjected to one hundred and ten minutes of an armed police officer badgering him, pressuring him, lying to him, and then searching his car top-to-bottom for drugs," Reeves wrote. "Nothing was found Jamison isn't a drug courier. He's a welder."

The lawsuit said Jamison's car was damaged during the searches and he was left by the side of the interstate after dark.

"Thankfully, Jamison left the stop with his life," Reeves wrote. "Too many others have not."

Reeves wrote that the 4th U.S. Circuit Court of Appeals -- which hears cases from Maryland, North Carolina, South Carolina, Virginia and West Virginia -- recently wrote in a qualifying immunity case: "Although we recognize that our police officers are often asked to make split-second decisions, we expect them to do so with respect for the dignity and worth of black lives."

"This Court agrees," Reeves wrote. "Tragically, thousands have died at the hands of law enforcement over the years, and the death toll continues to rise."

Copyright Associated Press. All rights reserved. This material may not be published, broadcast, rewritten, or redistributed.